Ripple XRP recently faced huge downward pressure due to the continued decline in currency prices. It has fallen nearly 40% since June, and has dropped below $0.36 since the 14th of this month. It is currently trading at $0.26. Concussion, as of press time, the XRP price is very close to the currency level of the bear market in December last year.

Affected by the continued sluggish currency price, XRP holders launched an online petition on August 5th, asking Ripple to stop “dumping” a large number of XRPs it holds. As of press time, the petition initiated by the trader and Twitter user @Crypto Bitlord on the Change.org website has received 2,469 signatures, and the number of signatures continues to increase. 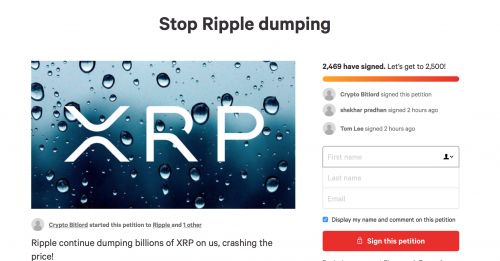 The petition shows that, on the one hand, Ripple is promising good news every day, including working with new banks or other institutions, but on the other hand Ripple is still trying to continue to “dump” billions of XRPs to the market. In other words, the so-called good news is hard to bear against the price of the currency, and the billions of XRP that Ripple “dumped” to the market is the chief culprit in the price collapse.

Although this petition is not binding, it is unlikely to have any impact on how Ripple sells its XRP to fund its operations, but it has driven market sentiment to some extent.

According to foreign media reports, Ripple "dumping" XRP is only one of the reasons for the poor performance of the currency. As XRP investors filed a new lawsuit against Ripple, the dispute over whether the US SEC classified XRP as a security has never stopped. In addition, according to the OKEx report, Ripple faces fierce competition in the payment solution, which may have a negative impact on Ripple's market share, which is also likely to affect the XRP's currency performance.

In fact, these problems are not the first time, and the hidden dangers that Ripple has brought a large number of XRP tokens to the market have existed for a long time. At this stage, the main reason for the outbreak of the conflict between Ruibo community and the market is that the market needs to find a reason for reasonable explanation for the loss caused by the poor performance of XRP currency.

Ripple's CEO, Brad Garlinghouse, issued a number of tweets on August 28, responding to some of the controversy over XRP and Ripple in the past few weeks. He reiterated that "XRP is not a security" and he said XRP The sales helped to expand its usefulness, and he put forward the opposite view of market cognition that Ripple actually “reduces our sales by quarter” rather than increasing XRP sales. Garlinghouse even said that the inflation rate of XRP's cyclic supply is lower than that of Bitcoin and Ethereum.

Ripple will release XRP market reports every quarter. Due to selling pressure, most of the unlocked XRP will eventually be hosted, but considering that XRP, which is worth more than $100 million per quarter, is released, it still cannot fully alleviate the market. Project party control concerns.

According to the report of the two quarters this year, of the 3 billion XRP released by Q2, 2.1 billion returned to custody, releasing 200 million XRP more than the first quarter. And Q2 sales reached 251.5 million US dollars, an increase of nearly 33% compared with Q1 sales of 169.4 million US dollars, which is the reason that directly triggered the "Ripple accelerated sales XPR" question.

Ripple previously denied the idea of ​​sales acceleration, and explained that because XRP programmatic sales are related to the volume of transactions reported by the exchange, XRP sales increased or related to the reporting volume of some platforms.

The root of this contradiction is not whether the inflation rate of XRP's cyclic supply is really lower than that of Bitcoin and Ethereum. The biggest difference between it and Bitcoin and Ethereum is that XRP token developers give away In the early stage, after a large number of tokens were distributed to Ripple, Ripple was a private company, which was subjective in the decision-making of XRP sales. The XRP and its capital trend were not subject to monitoring and community consensus. And the XRP sales report released by Ripple every quarter is not necessary and has limited transparency.

Although the previous XRP adoption situation is not good, Ripple is actively promoting the circulation of XRP and increasing the application scenario of XRP. In June of this year, Ripple made a $30 million initial equity investment in MoneyGram, the world's second largest remittance company, and has the right to invest another 20 million dollars in two years. This investment is focused on promoting Ripple's three major payment solutions. The only one that needs to use xRapid for XRP.

From a policy regulatory perspective, Ripple also has another motivation to actively promote XRP circulation. Since Ripple is still very focused on XRP holdings and needs to benefit from XRP, XRP has the potential to be identified as long-term securities. Earlier, some people in the industry accepted the interview with Caijing.com.com and said that whether it will be defined as securities depends mainly on the promotion degree and business direction of xRapid. If xRapid eventually aborts and the XRP application scenario is not there, then XRP is necessarily a security because it loses the unique functionality of a functional token. If the application scenario of XRP is more extensive, then Ripple's massive throwing of XRP has also contributed to the market's liquidity.

However, because Ripple holds a large number of Ripple coins in a concentrated manner, XRP has long been plagued by the “high degree of control”. The process of promoting XRP circulation is not easy, and it can be easily achieved by relying only on powerful partners. Coupled with the current sluggish XRP currency price trend, Ripple's consideration of the practicality and liquidity of the enhanced token will also face the challenge of "disguised" selling XRP.

The market continues to fluctuate, and the ETH market seems to have improved.

Report: Digital currencies are likely to become the norm with the support of regulators