In the previous issue (click to read) , we outlined the emergence of the crisis. Next, we will combine Ray Dalio's analysis of the economic system to further explain how the cycle should respond and evaluate the BTC from a more comprehensive perspective. value.

In "How Economic Machines Work," Ray Dalio analyzes the operation of the economy from the perspective of Keynesian economics.

His analysis is actually an observation of the national conditions of the United States—that is, the Fed essentially regulates the liquidity of the entire economy by raising interest rates and cutting interest rates. Because people can make consumption exceed output through lending, but they have to make consumption lower than output when they repay. By accumulating each person's transactions and debts, the cycle of the entire economy can be derived.

From a macro perspective, the US economic cycle seems to be mainly influenced by the central bank's guidance of monetary policy. But this is only the result is not the cause, the real reason is the social overcapacity .

The state can alleviate this problem by increasing the money supply (printing money), because the money in the economy is relatively depreciated. In order to reduce the asset write-down caused by depreciation, people tend to spend money to buy things. The consumption of the whole society has increased, and the economic crisis in the short term has been alleviated, but this is only to push the crisis back.

Banks lower interest rates on borrowing based on interest rates and stimulate people's credit. In this way, more people will borrow money to start a factory and start a company to start operations, thus driving economic growth.

If inflation occurs during the course of economic growth, the central bank will raise interest rates and resist inflation.

Tight monetary policy (high interest rates) will cause the money in the market to return to the bank. At this point, the credit contracted and the economy entered a period of recession. 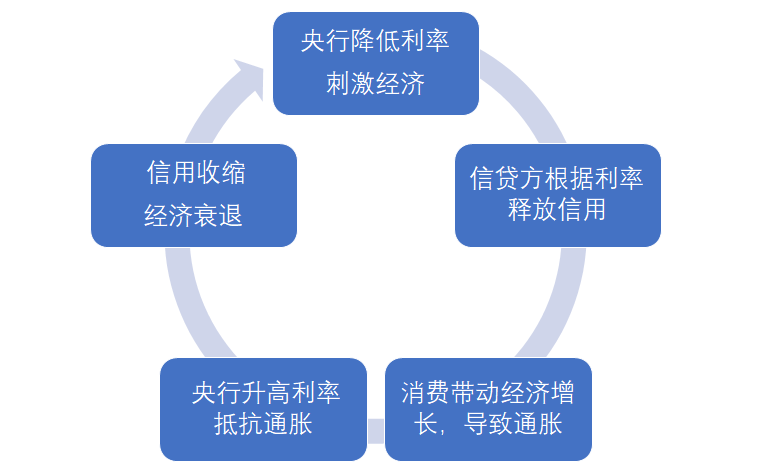 After a period of economic recession, the central bank will start to stimulate the economy. Our economic cycle is back to the first step.

This is actually the economic cycle of Keynesian economics.

So, what step is it now?
In 2017, Ray Dalio believes that US stocks will fall; and in 2016, Soros began to open positions in the US stock market. Behind these market operations, they represent their judgment of the US economy – the economic cycle is not going well.
However, the central bank has sufficient interest rate adjustment space to complete the cycle. Around 1980, the highest interest rate in the history of the Fed was close to 20%. In this case, the macro-control strategy of reducing interest rates is effective.

US federal interest rate: 1950 – 2019
But since 2009, US interest rates have been around 2% for 10 consecutive years, and there is no room for growth to stimulate economic growth.

In the same situation, Japan and Europe, in order to stimulate economic growth, they have implemented a negative interest rate monetary policy. But this did not make these countries' economic recovery, but instead fell into a stagflation.

Since then, the United States has entered a long-term debt cycle, which is the deleveraging cycle, and the economy is gradually declining.

02 How to spend the depression period?

Ray Dalio believes that the following solutions can better solve the depression problem:
1. Individuals, companies and governments cut spending 2. Reduce debt through debt defaults and restructuring 3. Redistribute wealth, transfer wealth from the rich to the poor 4. The central bank issues more money, quantitative easing
Through a series of means to stimulate the economy and production, the economy will enter a long recovery period. From the history of the United States, the last Great Depression, probably around 1927-1937, lasted for ten years. 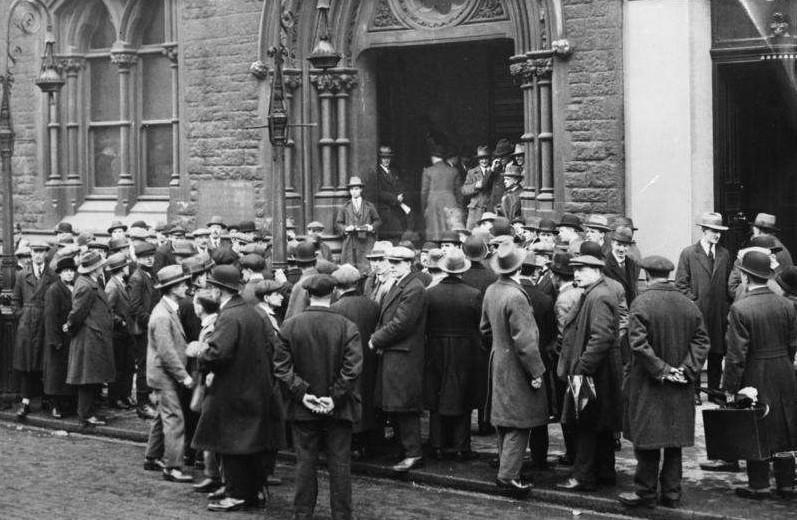 A large number of unemployed people appeared during the Great Depression

And is the method proposed by Ray Dalio effective? This will be discussed in the future.

03 Why does Ray Dalio look at US stocks? 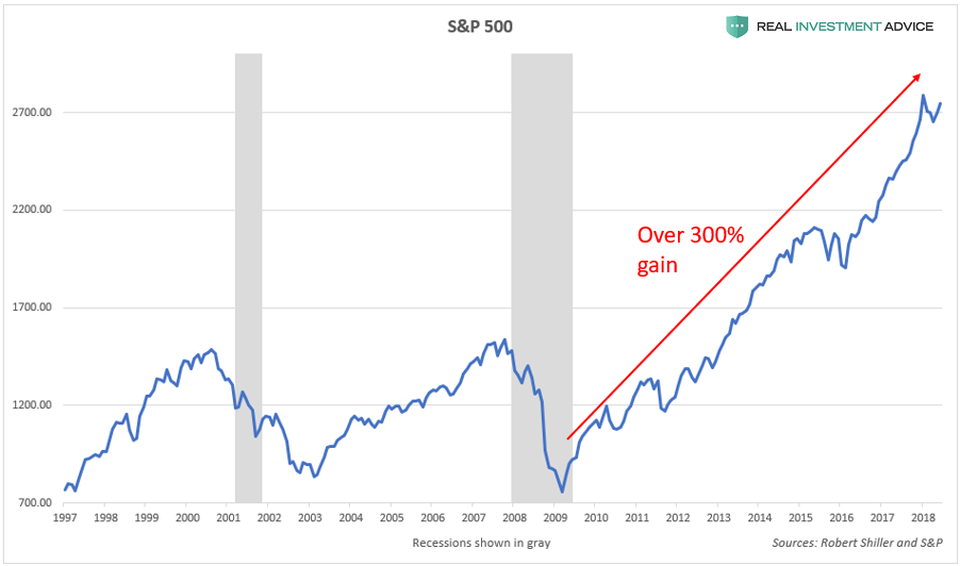 American stocks basically have dividends, and the profits they earn are distributed to many investors. But in fact, only 25% of these stock dividends are real profits, which is the money the company earns through operations.
The remaining 75% of the profits are through stock repurchase. That is to take the company's money to buy the company's stock, so that there are fewer stocks on the market, and the stock price will rise.
The reason why companies have sufficient funds for repurchase is because the central bank provides zero interest rate funds. In other words, stocks are mainly supported by debt. US economic analyst Jesse Colombo pointed this out in the September 2018 article "Disaster Is Inevitable When America's Stock Market Bubble Bursts."
The compensation of the management of US listed companies is linked to the stock price. The company's share price rises through the repurchase, and the company's management income will also increase.

Because of this incentive mechanism, the company's decision-making level will also be more inclined to carry out stock repurchase to raise the stock price, rather than really optimize the efficiency of the enterprise.

This is the real reason why Ray Dalio is short on US stocks.

Under such a macro cycle, what kind of market is Bitcoin that we are concerned about?

We believe that it is actually a prologue that opens up the national VC, with these characteristics:

1. Technology attributes: Bitcoin, as an Internet technology, has the potential to be applied.

2. Network effect: The number of Bitcoin holders in the world is estimated to be tens of millions. The survival of Bitcoin is guaranteed.

3. Low barriers to entry: Traditional financial markets invest in high-tech companies with many restrictions, such as the amount of money and relationships. The bitcoin market is completely open.

Due to these qualities, the bitcoin market has gradually attracted capital attention and is growing faster.

According to Cryptocompare, on the first day of 2017, more than 5 million bitcoins were traded in RMB, equivalent to $3.8 billion . After 5 days, the bitcoin price in the Chinese market reached RMB 8,600, while the foreign currency price on the same day was only about 7,700 yuan, and the difference was as high as 1,000 yuan.
The Chinese market has ignited rising fuzes. Subsequently, the trend of skyrocketing spread to the whole world.

Looking back now, we will find that this is a financial market driven by hot money.

Studying the source of hot money is the key to our study of bitcoin skyrocketing.

Influx of domestic speculative funds in 2015

According to the 2015 domestic railway statistical bulletin data, China's railway freight volume decreased by 11.9% over the same period. The real economy has fallen sharply. In 2009, the infrastructure and real estate investment boom will gradually cool down by 2015. In the same period, the government's monetary easing policy led to a lot of cash to go.

Capital is unprofitable in the physical market and can only be turned into a highly speculative lending market.

This is also an opportunity for the rise of China's online lending industry. Industry data of the online loan home shows that by 2019, online loan companies have accumulated more than 6,000 in the country.

During this period, a large amount of speculative funds also turned their attention to Bitcoin. As a result, the price of Bitcoin has soared with the help of domestic hot money. This further stimulated the entry of funds from Japan and South Korea.

This time, the final admission is the funds of Europe and the United States. 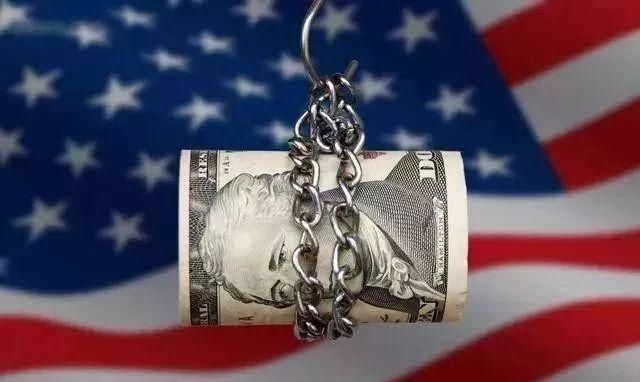 The macroeconomic tightening will cause hot money in the market to quickly withdraw from high-risk markets. Digital currency, as the most risky liquid asset, must be given priority.

Although the bitcoin market continued to rise to the end of the year, the foreshadowing of the crash has already been buried in mid-2017.

03. Our judgment on Bitcoin

1. Is Bitcoin digital gold?
Why would anyone say that Bitcoin is a safe haven? Looking at it now, bitcoin is far behind the safe-haven asset “gold”.

Bitcoin is the most stable in digital currencies, so it is a safe haven. For the real economy, further market feedback is needed to determine.

2. Can Bitcoin be legalized?

The coinage right is one of the most important powers of the state power, and no government will hand it over.

In fact, the recent round of Chinese government's crackdown on digital currency trading has begun. A large number of Alipay WeChat accounts, which are frequently involved in offline digital currency transactions, have been closed, and the capital's entry has been gradually closed.

3. Is there any value in Bitcoin?

Value is outside the law. 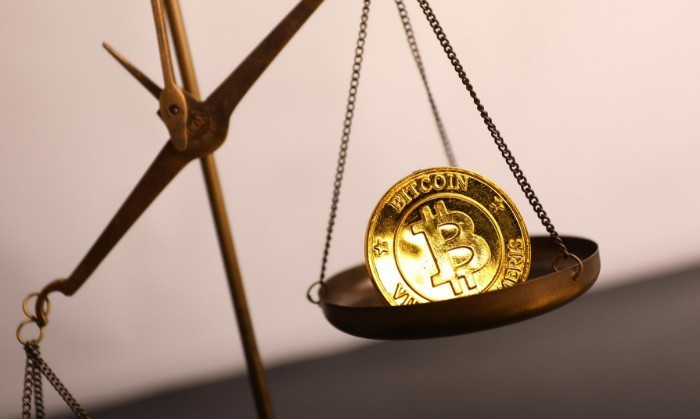 Black market transaction
In 2013, Silk Road was well known for a while.

In the less than two years of the Silk Road life cycle, its transaction volume reached 1.2 billion US dollars.

Dark net money laundering
An independent academic research report by the security company Bromium, "In-depth Profit Network," points out that cybercriminals clean up about $800-200 billion in illegal income each year, accounting for 8-10% of all illegal income worldwide. The most commonly used money laundering tool is virtual currency. Although many criminals have turned to more secret anonymous cryptocurrencies, a significant portion of them are still using bitcoin. And the $200 billion deal has already propped up the GDP of a small country.
4. The cycle of Bitcoin?
We believe that after the 2006-2017 skyrocketing, the Bitcoin market has a two-year investment window. The future is full of uncertainty, especially after the government has intervened in the market.

Bitcoin is a high-risk, high-reward stock market for investors. While the US stock market has been from 2016 to the present, although the S&P 500 index has risen by 1800-2800, the overall increase has been around 40%. This is in the bull market stage from the small cycle of the stock market. However, as the entire macro market enters the long-term debt cycle, the performance of this round of US stock market is actually the end of the bull market. 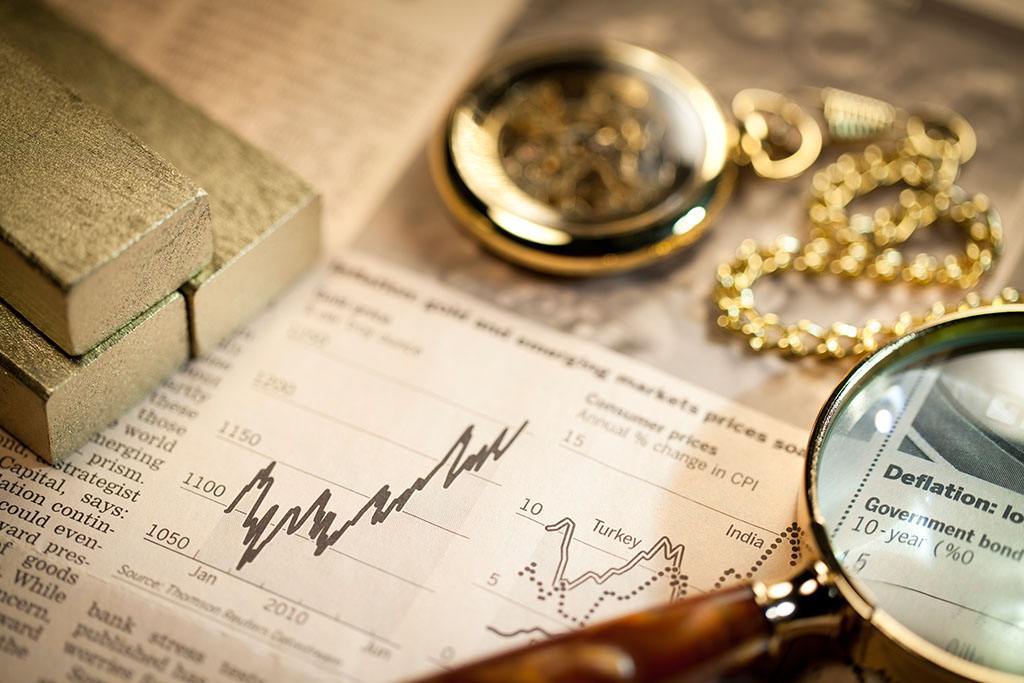 We think there are three possibilities.

2. Currency funds: After the small currency hype, the bubble burst and find a more stable digital currency to hedge.

3. Traditional funds: asset allocation. The inflow of a small portion of the traditional market into the bitcoin market can drive a large increase.

In fact, the deeper the market, the more ignorant the market is.

We hope that by sharing some of our recent observations of the market, we will have a more essential understanding of the market and hope to hear more about the market.

If you have different opinions, welcome to discuss!

Written in the back

X-Order is an investment research organization dedicated to discovering the order of expansion. It hopes to use machine learning, blockchain and the economy to make small innovations discoverable in the world.

We create original content and translate the content into English for foreign communities. We sincerely recruit volunteers with the same interests, write articles and do translations with us, and interested friends must let the little assistant know! (Little Assistant WeChat: DaiGuanXorder)

CCTV financial commentator: "Facebook coin" is difficult to be universal

New Zealand police confiscated about $4.2 million in cryptocurrencies from a programmer suspected of involvement in online movie piracy