The highlights of the summit are as follows:

In this summit, the 5G Chain Engineering Task Force (5GCyber ​​Engineering Task Force), jointly initiated by Dr. Tang Xiongyan, the chief scientist of China Unicom Network Technology Research Institute, and other well-known experts in the ICT field will be officially launched. In the future, it will be responsible for promoting the related technologies of 5G chain network. Standard R&D and development. The 5G chain network engineering task force will fully learn from the mechanism and spirit of the IETF (International Internet Engineering Task Force), and take the construction of the Nanjing 5G Chain Network Test Bureau as the experimental field, based on the Rough Consensus and Running Code. The bottom-up working group is the core, and the designers, developers, operators, investors, researchers and interested parties interested in the 5G chain network are widely used to build a shared RFC. Others work together to build an open, international technology research community. On the afternoon of September 6, the 5G Chain Network Engineering Task Force will hold its first open meeting to discuss the main tasks of the project task team and the initial working group settings. In the same period, China's first 5G+ blockchain private technology open source community will also be officially launched at the meeting to enhance China's role and status in the international open source community.

The 5G chain network is a new breed of imagination and disruptive originality. The goal is to create a new network space (New Cyberspace beyond Internet). Based on Facebook's global open source 5G project (TIP Project) foundation, this time through the important historical moments of the 5G chain (global) summit, the 5G chain network engineering task force and the 5G+ blockchain folk technology open source community are looking forward to Your joining, injecting your blood, together lead the future of 5G chain net!

Different from other summits, this summit specially set up a face-to-face meeting of big coffee. From September 1st to 15:00-17:00, the guests can face-to-face, zero-distance communication with many mysterious big coffees, and deep exchange of project cooperation. The opportunity is rare. Participants can only make an appointment by scanning the code. The appointment time for the QR code is 14:00 on September 6 and is available on a first-come, first-served basis. Each participant can only reserve a time period for a guest, 15 minutes each time. In addition, a high-quality corporate exhibition was set up at the same time, and about 20 companies were exhibited.

These guests will share with us the forward-looking topics of how data can be better realized in the 5G era and how edge storage will become an important infrastructure in the chain era.

According to a report released by CB Insights, from 2014 to 2019, the countries with the highest number of blockchain financing projects in various regions of the world are: the United States, China, the United Kingdom, Singapore and South Korea, Africa, South America, Emerging markets such as Southeast Asia seem to have become a corner for investors to forget.

On the other hand, there are opinions that the financial system on the African continent has begun to be infiltrated by digital currency. Many countries in South America have chosen to use bitcoin to cope with inflation. The development of financial technology such as Southeast Asia is lagging behind and is willing to be transformed by new technologies such as blockchain. Become the fastest market in the blockchain.

For emerging markets such as Africa, South America, and Southeast Asia, what are the blockchain investment opportunities? If you want to find out the answer to this question, this "5G chain + investment" sub-forum, not to be missed.

The rapid development of 5G basic technology, re-imagining the digital civilization beyond smartphones and redefining the future network information space around 5G will become the core engine of the new generation of digital economy development in the world and the commanding height of disruptive innovation.

In June, social media giant Facebook released the Libra white paper on cryptocurrency, which triggered global attention in the fields of finance, technology, and regulation. Can Facebook actually launch the project? Can Libra break through the heavily regulated levels? What impact does Libra have on digital currency and traditional finance? Become a key topic of focus in various industries.

At the same time, China is also accelerating the application of digital currency. It is understood that the central bank's digital currency will launch encrypted digital currency in November, and the eight companies and institutions involved in the development will become the first users to release the news, promptly causing Widely discussed at home and abroad.

This forum not only invited domestic economists, but also encrypted digital currency scholars to hold round-table discussions. At the same time, the forum invited an Open Libra open source technology community project (codenamed Violas), which was jointly prepared by overseas underlying technology geeks, Internet application experts and encryption economic enthusiasts, to attend the summit in Nanjing. This will be the first mystery of Violas in the world. Debut.

In the traditional context, it is difficult to achieve trust between major business systems due to data islanding problems. The blockchain trusted business alliance can form a trusted bond in an environment with weak trust or weak trust, save the time and cost required for credit formation, establish a business trust system in which multiple parties participate, and establish an efficient network. Form a multi-party consensus.

The forum invited representatives from the logistics, energy, culture and other industries and blockchain technology companies to focus on the real pain points of the real industry, share the real experience of blockchain empowering entities, and explore blockchain-based Trusted business system.

In addition, the summit also set up other activities, such as: super smart reading club, etc., more exciting activities continue to increase…

2019 is an important year for the development of human history. This year, 5G entered the commercial era, and the blockchain entered its tenth year. The integration of these two cutting-edge technologies is imperative, and the two are bound to unleash the power beyond imagination, adding new impetus to the development of the new generation of digital economy around the world.

And this 5G+ blockchain summit, every audience present will witness the history.

The summit will also adopt the form of webcast. The audience in the field can understand the content of the summit and the live situation through the network, so as to achieve the effect of connecting the people and the global network.

Li Lihui: At this stage, legal digital currencies may adopt a "horse racing" mechanism that does not rely on a single blockchain technology

BTC tests the bottom track of the up channel again. Is the long cool? 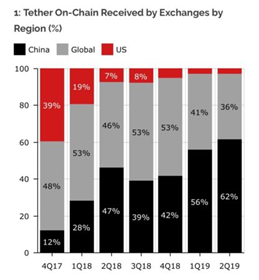