Recently, the picture platform China was caught in the copyright "black hole" by marking the "human first black hole photo", and the event triggered a series of disputes about the copyright of the picture. On April 13th, during the Lingnan Intellectual Property Litigation Conference in 2019, relevant experts accepted an interview with the New Express reporter that the blockchain technology is very good for the traceability and confirmation of the copyright of the image, and there is no technical problem. Fine management can be achieved.

The number of cases has reached a record high

Among them, the Guangzhou Intellectual Property Court accepted 10086 cases in various cases in 2018. Since the establishment of the court, it has exceeded 10,000 items for the first time, and 8202 cases have been completed; the Yuexiu District People's Court has accepted 4,131 new IP cases in 2018, a year-on-year increase of 54.31%. 3,959 cases were concluded, a year-on-year increase of 47.89%. The total number of cases received and closed and the number of judges per capita closed up a record high; the Tianhe District People's Court received 4,473 new IPR cases in 2018, and a total of 4,772 cases were closed, including 4,745 cases of intellectual property. The number of closed cases increased by 52.77% compared with last year. In the 2018, the Nansha District People's Court newly received 1152 IPR civil cases (including 30 cases in the Free Trade Zone), an increase of 46.75% over the same period of last year; 1169 cases were concluded, the settlement rate was 93.22%, and the first-instance judgment rate was 84.69%.

At the meeting, Wang Jiaqi, deputy general manager of Shenzhen Zhibaobao Network Technology Development Co., Ltd. revealed that the company observed 23,009 sample data of 2018 intellectual property civil cases in Guangdong Province from the Zhibao database and found that most of the intellectual property civil cases were In copyright cases, patent cases and trademark cases, the number of copyright cases accounted for 51%. Wholesale and retail, high-tech and manufacturing are the industries most involved in the plaintiff.

"Partial 'low compensation' stems from 'difficulties in proof', and should be improved from the aspects of enriching evidence and punishing evidence." Wang Jiaqi said.

Copyright-related laws may need to be extended or appropriately modified

Some image users pointed out that the use of the platform side of the picture without knowingly was also claimed as "high price" after deleting the photo. This situation is not reasonable. Liu Yanxi, director of the Fair Trade Legal Business Professional Committee of the Guangzhou Lawyers Association, said that copyright infringement is a use of infringement of copyright, copyright includes personal rights, and reproduction and distribution rights. Generally, the use of pictures in their own works is a violation. Copy right. As long as the conduct is implemented, the consequences must be borne, including the cessation of infringement and compensation.

Liu Yanxi believes that "in recent years, the development speed of mobile Internet and virtual society has gone far beyond expectations. It is really necessary to expand some legal explanations or modify relevant laws to adapt to new needs."

In addition, some experts believe that the method of copyright determination is too expensive for picture works, and the copyright attribution of pictures is often difficult to trace.

In this regard, Wen Zhonghui, chief expert of the National Information Security Engineering Technology Research Center and cyberspace intelligence expert, said in an interview: “The blockchain technology is very good for traceability and confirmation, especially on copyright issues. The picture class can be obviously solved with the blockchain. The blockchain can be very detailed, for example, how much money a song listens to, how much money is heard 10 times. Technically, it is very simple, how to operate finally It is also necessary for all parties to explore."

Guangzhou enterprises were awarded a compensation of 3.3 million yuan

Guangzhou Chuangying 起诉 sued Guangdong Funhe, Shanghai Yushi, Shanghai Feihu for infringement of the copyright and unfair competition of “Jianyu Jianghu” to the Tianhe District People's Court of Guangzhou. Case (2017) Guangdong 0106 Min 10490-10491. After the judgment, it was found that the defendant’s infringement and unfair competition were established, and the plaintiff’s economic losses of 3.3 million yuan were compensated.

Comments: The lawyers organized the infringement elements in the defendant organization. According to the appraisal report, the art elements and the layout of the textual works in each game picture were completely split, and nearly 100 sets of similar contents were collated. Finally, explain to the judge the existence of infringement and unfair competition.

The case-handling lawyer believes that the case is a typical case of copyright infringement and unfair competition. It not only saves the plaintiff huge economic losses, but also plays a positive role in maintaining the economic order of the game industry and has a high reference value.

"The blockchain can be very detailed, for example, how much money a song listens to, how much money to listen to 10 times. Technically reached, very simple, and finally how to operate, you need to explore."

"In recent years, the development speed of mobile Internet and virtual society has gone far beyond expectations. It is really necessary to expand some legal explanations or to appropriately modify relevant laws in order to adapt to new needs."

Babbitt Column | Why is… 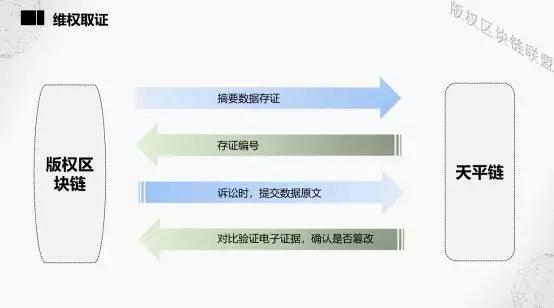 Under the blockchain blessing, your…