The number of bitcoins created every 10 minutes is reduced by half every four years.

This is called halving bitcoin. The next halving will be the third halving of Bitcoin, which will be implemented in May 2020. At that time, the block reward of 12.5 bitcoins per 10 minutes will be halved to 6.25 bitcoin.

Given that Bitcoin's maximum supply limit is 21 million, halving the block reward means that all bitcoins will take longer to get into circulation.

But it also means that as time goes on, the number of new Bitcoins will become less and less, and due to its limited supply, Bitcoin will continue to become scarcer, and scarcity will increase value.

Historically, the halving of Bitcoin has proven to be an important catalyst for pushing Bitcoin into a new bull market.

In fact, Bitcoin tends to have a new round of bull market for at least a year before halving.

But what is the impact of halving bitcoin on the price of bitcoin ?

This article will explore the following issues: 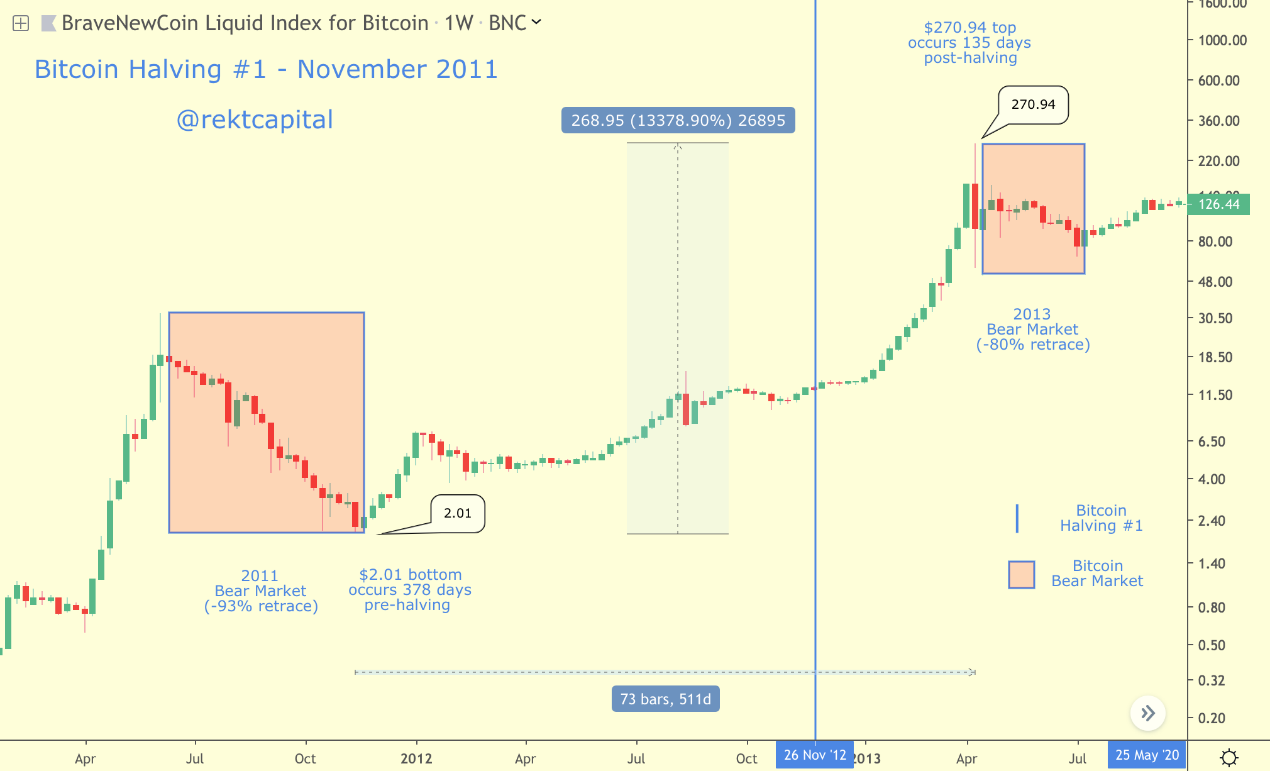 The price of Bitcoin after the first halving

The first halving of Bitcoin took place at the end of November 2012.

The halving of Bitcoin for the first time is a key catalyst, driving significant growth in Bitcoin and opening a new bull market cycle. The second halving of Bitcoin took place in early July 2016.

After comparing the two parts, we came to the key conclusions:

1. Bitcoin halving is a key catalyst for a new round of bitcoin bull market

Historically, the halving of Bitcoin has been a key catalyst for pushing Bitcoin into a new bull market.

Bitcoin prices will rise before and after halving.

In fact, the price of Bitcoin has reached a record high due to halving. But this new high appeared only a few months after Bitcoin was halved.

In both cases, bitcoin price increases have similarities.

Let us now look at the second halving.

The similarity between the two is that Bitcoin rebounded from the bottom of the bear market by about 12,000 -13000%, reaching the top of the bull market after halving.

How do these insights compare to the upcoming third halving of bitcoin we know? 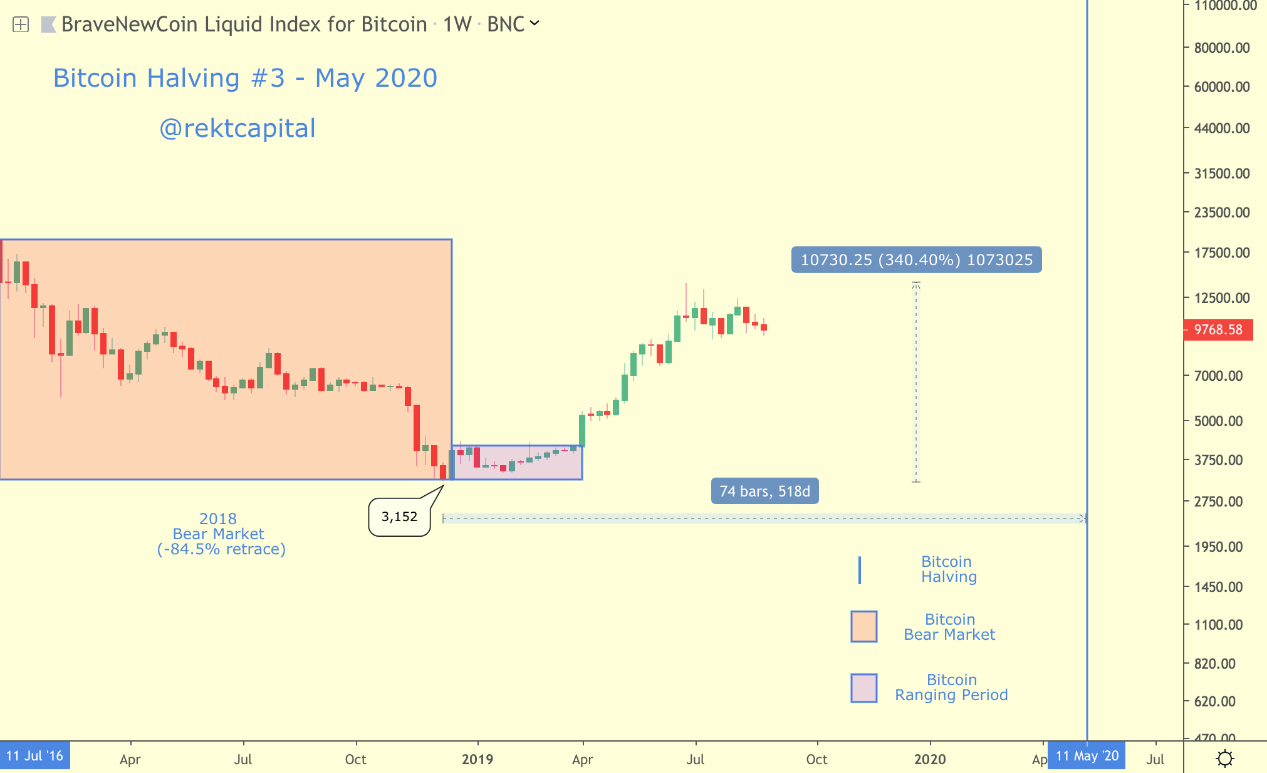 Bitcoin halved for the third time

This means that the price of Bitcoin bottomed out about 519 days before Bitcoin halved for the third time.

This is very interesting because there are some key similarities between Bitcoin and the second halving.

Here is the second halving of Bitcoin:

Bitcoin prices bottomed out 544 days before the second halving.

Bitcoin rose 383%, reaching its highest point before the second halving.

This is a powerful recurring theme, so let's further break down the price of Bitcoin and halve it.

Let's divide the price of Bitcoin into two stages: “pre-half” and “post-half” in an effort to discover any trends or topics that may reappear. These trends or topics may help us to the upcoming A halving of 3 bitcoins has a more comprehensive understanding. 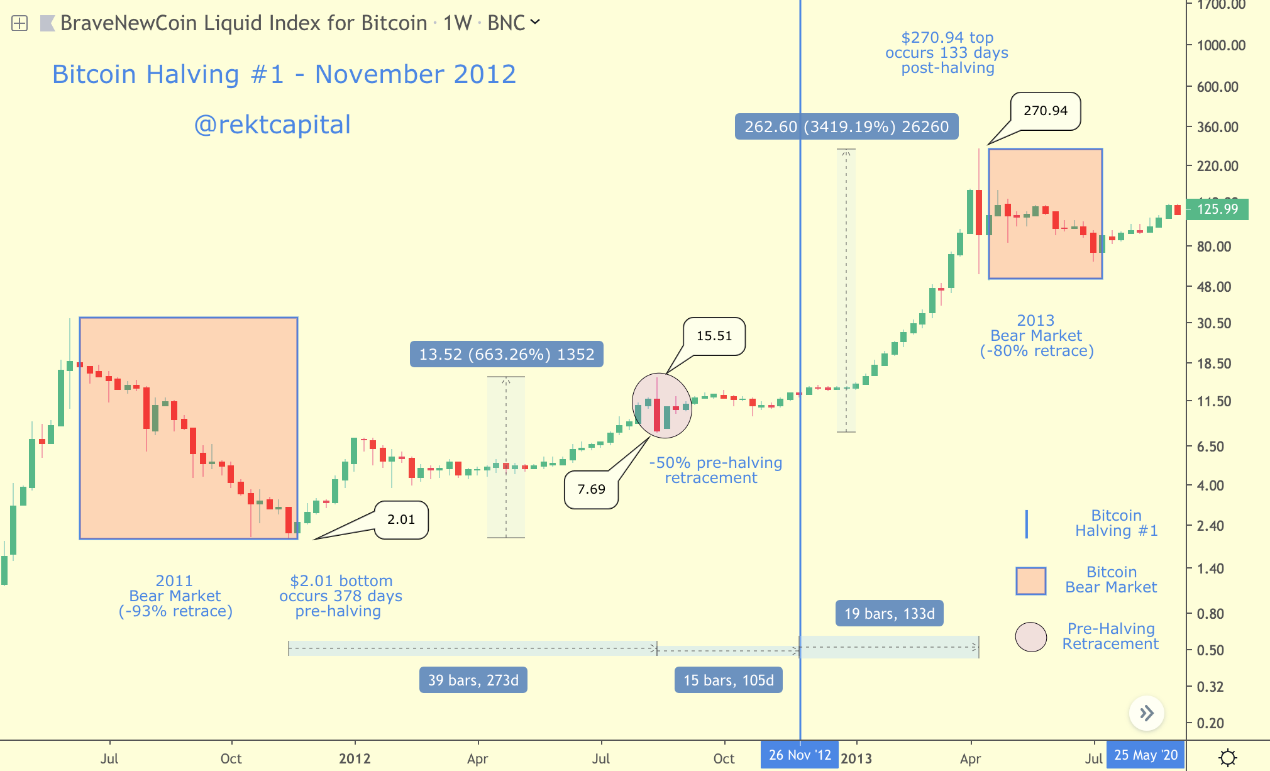 Bitcoin price before and after the first halving 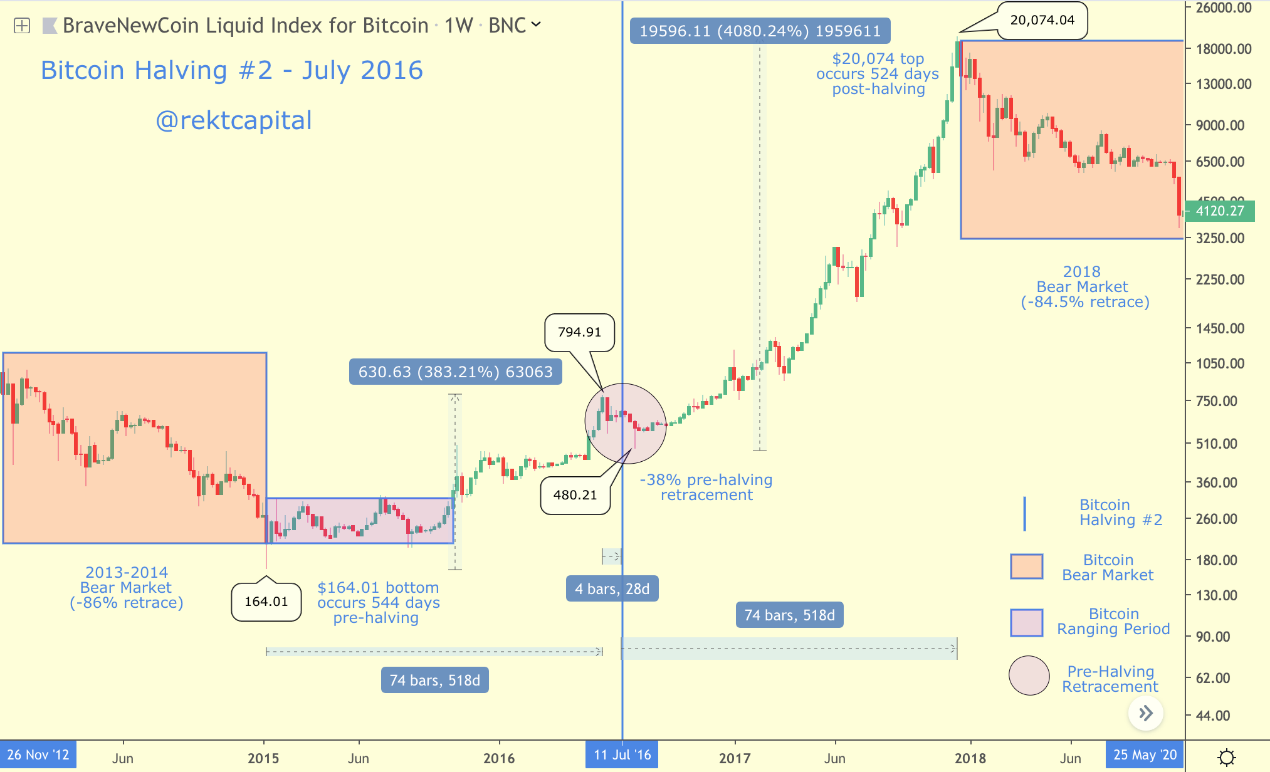 Bitcoin price before and after the second halving

The exponential growth in bitcoin prices has mostly occurred after halving .

Once Bitcoin bottomed out after falling 50%, Bitcoin rebounded more than 3400% after halving, reaching a market cycle high of $270.94.

In halving #1, the growth after halving is more than five times the increase before halving.

In halving #2, the growth after halving exceeded the 10.5 times increase before halving.

Obviously, the exponential growth of bitcoin prices has mostly occurred after halving.

In fact, Bitcoin has successfully achieved a record high after every halving.

After reaching a record high, Bitcoin will enter the bear market after the bull market, and bitcoin will fall at least 80%.

Before the first halving , bitcoin prices experienced stronger and faster growth than the growth rate before the second halving .

In the first halving, Bitcoin rose by 683 percent in 273 days, reaching its highest point before its first halving.

If Bitcoin rebounds less before halving, it will bounce more after halving.

There is always a pre-half turbulence period (callback) .

In the past, this pre-half callback has been a bear trap for many investors.

Many investors will sell bitcoin to record their profits, while others will withdraw their investment by selling bitcoin for fear that bitcoin prices will fall sharply.

In any case, both types of investors will miss the future index uptrend.

As long as you know this trend, it is possible to help investors avoid the fate of Bitcoin's third halving – if history is repeating itself, this retreat will occur again.

That's why it may help us further dissect these callbacks and compare them to each other to help us understand.

Let's first look at the callback before halving #1

a) occurred more than 100 days before halving,

This is enough to get quite a few investors to withdraw their bitcoin position (although in the first halving, Bitcoin has almost completely recovered its short-term valuation during the callback process).

Once Bitcoin bottomed out after a 50% fall in the benchmark, Bitcoin rebounded more than 3400% after halving, reaching a market cycle high of $270.94.

Reduce the callback before #2

a) occurs 24 days before halving,

d) Continue for 20 days after halving.

While there isn't any significant commonality between these callbacks, it's still important to understand the details, even if it's just to manage expectations, what might happen during the third halving of Bitcoin.

The pre-half high point before the callback has been the highest pre-half price point in Bitcoin history, but not enough to set a new all-time high .

Bitcoin prices tend to accelerate before Bitcoin is halved, and then there will be a callback.

As it turns out, from the previous two halving market conditions, every time the bear market bottoms out, whether it is the high of 15.51 US dollars before the first halving or the high of 794.91 US dollars before the second halving, it is just right. It is the highest point before Bitcoin is halved. However, this price point did not exceed the previous historical high.

The price of Bitcoin has always hit a record high several months after halving.

How will Bitcoin's third halving affect the price of Bitcoin?

So far, we have discovered many different compelling trends in bitcoin price movements as bitcoin prices have halved.

At this stage, the question is whether we can use this information to infer the impact of the upcoming third bitcoin halving on bitcoin prices.

People tend to use historical market data to infer trends and infer these data as potential future trends.

Based on the historical trend before and after Bitcoin halved, we can only guess how the price of Bitcoin might behave due to the halving of the upcoming third.

Having said that, let's examine the most important trends from the perspective of historical price data and see how the third halving of Bitcoin will affect the future price movements of Bitcoin.

The $385,000 bitcoin is interesting because it means that the market value of Bitcoin ($189 billion at the time of writing) will exceed the current gold market value ($7.8 trillion).

This event will truly consolidate Bitcoin's status as “digital gold”.

2. New market cycle highs tend to occur before Bitcoin is halved , but it will not exceed historical highs

Since mid-December 2018, Bitcoin has risen more than 340%, which is very similar to the 383% increase in Bitcoin before the second halving.

If Bitcoin rose by 383% as it did before the second halving, it would reach a new market cycle high of about $15,000, which is higher than the current encryption market high of $13,900.

The shift in this situation will be in line with the historical trend of setting a new market cycle before halving, but will not set a record high.

In turn, this will also satisfy another key trend: if Bitcoin bounces less before halving, it bounces more (and lasts longer) after halving.

If this trend reappears, this would mean that the probability of a bitcoin rising more than 13,000% would be higher than the 12000% probability.

However, on the other hand, if Bitcoin's rise is similar to the top-ranked 663%, this means that Bitcoin's price will reach nearly $24,000 before the third halving.

Of course, this has led to a new historical high, in violation of the above historical trends.

If this is the case, Bitcoin will take longer to manage its price increase after halving (after all, Bitcoin spent more than 500 days managing the new path up more than 12,000% after the second halving. ).

3. After a new market cycle high is set, the callback will occur before halving

The callback is likely to happen before halving, which is a financial opportunity for traders and investors.

4. The price of Bitcoin will hit a record high after halving

Historically, bitcoin has hit a record high every time it is halved.

Regardless of the historical maximum price of Bitcoin, this new record is likely to appear several months after the price has been halved.

What is important is that we must be aware of the historical significance of the halving effect of Bitcoin prices and have the ability to appreciate it. After all, the historical price movements of Bitcoin suggest that halving bitcoin is a unique event that often makes investors make money – not only before halving, but also after halving months.

Halving bitcoin is a simple statement with a high probability of profitability.

Of course, past performance does not guarantee future results.

But with regard to history, it is safe to say: History doesn't lie (history does not lie).

In the words of Mark Twain: 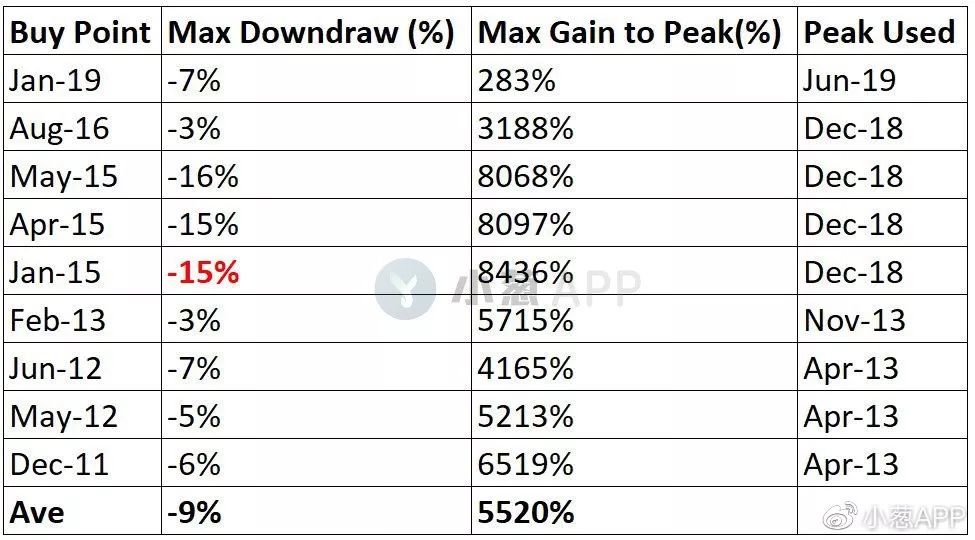