Time pulled back to 2008, a programmer named "Zhong Ben Cong" published a paper on the cryptographic mailing list on the "metzdowd.com" website, entitled "Bitcoin: a peer-to-peer The Electronic Cash System, however, was a stone that was thrown into the sea at the time and did not set off waves.

To the surprise of many, the decentralization, confidentiality and scarcity of Bitcoin have made it increasingly popular, and there has even been a call in the industry for Bitcoin to become a world-class currency.

Saifedean Ammous, author of Bitcoin Standard, once said that the establishment of a sound monetary system will be one of humanity's greatest achievements. Once the monetary system collapses, human civilization will also be destroyed. At the beginning of the creation of Bitcoin, Satoshi Nakamoto hoped to create a global free-flowing, unregulated currency, use the Internet to perform traditional currency functions, and solve the ancient topic of “transporting value across time and space”.

The so-called sovereign currency is based on the currency of a sovereign country as the international reserve currency. It has three main functions: value storage, payment methods, and accounting units. As a means of payment, international currency acts as a medium of exchange in capital transactions. As a unit of account, the sovereign currency is used for the valuation of commodity trade, that is, the value of various commodities is expressed as a certain amount of money, and the value of the commodity is expressed as the amount of money. As a means of storing value, it refers to the function of money to maintain or increase purchasing power for a period of time. Generally speaking, this currency cannot be easily depreciated, so the inflation rate must be controlled within a certain range.

From the relationship between bitcoin prices and bitcoin supply as shown below, we can see that the current annual inflation rate of bitcoin supply is about 3.8%, and the supply of bitcoin has been declining over time. Block rewards are halved every four years and have experienced two reductions so far; according to the chart below, with the next half of the blockchain rewards halved, the annual inflation rate of Bitcoin will be less than 2%, and with The value will be infinitely close to zero over time. 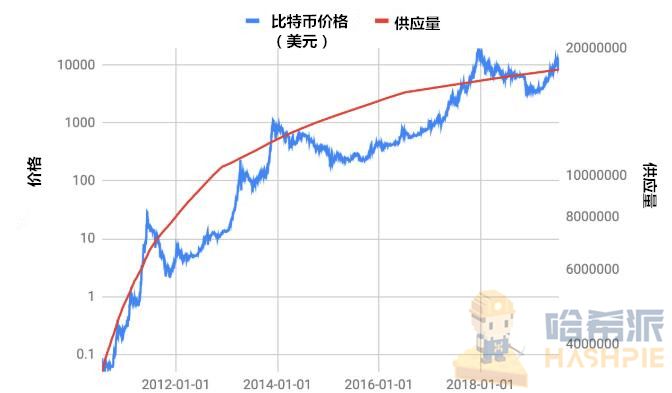 In general, the higher the inventory flow ratio, the greater the scarcity. The high inventory-to-traffic ratio and strong scarcity of gold make it the commodity with the lowest price elasticity. According to the regression of the inventory flow ratio and the bitcoin price change, an equation between the price of the currency and the inventory flow ratio can be obtained:
Bitcoin price = 0.209 * Inventory flow ratio ^ 3.08
In other words, in the case of a decline in the growth rate of bitcoin supply, the price of coins will continue to rise. But in fact, because of the characteristics of bitcoin mining, miners need to sell bitcoin to pay for mining electricity. The market is under pressure to digest these bitcoins, and in some cases will curb the rise in currency prices.
In general, the current bitcoin does not meet the sovereign currency inflation requirements, but according to the above chart information, the value of bitcoin will tend to rise steadily in the later stage, towards the direction of value storage.

Another very important function of Bitcoin is as a means of trading and acting as a medium of exchange. Quantitative analyst PlanB said that daily transactions actually have little effect on BTC prices, and miners are the biggest sellers, and that is the group that can really affect bitcoin prices. They receive rewards through electric mining and trade with the rewards they receive.

The amount of the reward is driven by a hash, and the total hash represents the power of each miner on the network. In order to keep the rate of production of new blocks stable, the difficulty of bitcoin mining will undergo an automatic adjustment at regular intervals, and the difficulty will increase with the increase of miners.

As can be seen from the chart below, mining difficulty continues to grow as bitcoin prices continue to grow. If this situation continues, Bitcoin's mining costs will be higher and higher, so miners want to be compensated for bitcoin prices. In fact, in order to maintain a stable rate of new block production, the level of computing power has also declined several times. Here we introduce the concept of price-earnings ratio (PE) in an encrypted asset: the NVT ratio, which is the network value-to-transaction ratio. In contrast to the P/E ratio (PE), since the cryptocurrency is different from the enterprise, it is not profitable, so it uses the “daily transaction volume” that represents the potential utility of the blockchain to reflect its performance indicators to gauge whether the currency price is overvalued or underestimate. Since the essence of Bitcoin is the payment and storage value network, we can regard the funds flowing through its network as “company income”, so NVT is the ratio of company income (NV) to transaction amount (T). The formula is: Figure 4 Bitcoin price and trading volume change trend We can get through the above figure, the trading volume and bitcoin price curve are similar. The larger the trading volume in US dollars, the greater the value of Bitcoin. This logic is similar to the development of SaaS companies like Amazon: its pre-global business has been losing money in the early days, but as the volume of transactions increased, it pushed the revenue of its platform to achieve profitability.

However, the original setting of the NVT ratio ignores the function of cryptocurrency as a value store. For example, a decrease in transaction volume leads to an increase in NVT, which does not necessarily mean that the price of the currency is overvalued. This may also be because more and more long-term The volume of transactions caused by the currency of the currency has decreased.

Overall, Bitcoin has a strong trading capacity and can be viewed as an exchange medium. Mortgage rate and dilution rate are regarded as indicators of value storage, and turnover rate is used as an indicator of exchange medium. Researcher Liu Yulin believes that at the end of 2013 and 2017, PU ratio (bitcoin price/token effect) exceeded normal twice. Range (between 50 and 200), this is the embodiment of the Bitcoin bubble.

Using the volatility analysis of the EWMA model, it can be found that the average annual volatility of bitcoin is more than 100%.

Therefore, it can be concluded that the current volatility of Bitcoin is too high and is not suitable as a unit of account. Although it is possible to reduce the volatility below 8% according to the trend of continuous decline in volatility, this is a very long road.

If Bitcoin is to become a sovereign currency, it needs to reach the above three sovereign currency indicators. At present, Bitcoin can achieve borderless transfer and stable inflation rate due to its pre-programmed characteristics. However, compared with sovereign legal currency, its price has very high volatility and has not yet become sovereign. The condition of money must be comparable to that of sovereign currency. Bitcoin still has a long way to go.