The market value of Bitcoin is over 70%. Han Feng: Bitcoin has a solid position and is optimistic about the new wind in the industry.

For Bitcoin, many investors are most concerned about the topic of halving the block rewards for the next year.

In the current market, there is another thing that has caught the attention of many investors: the market value of Bitcoin accounts for more than 70% of the mark (72.17% at the time of writing). 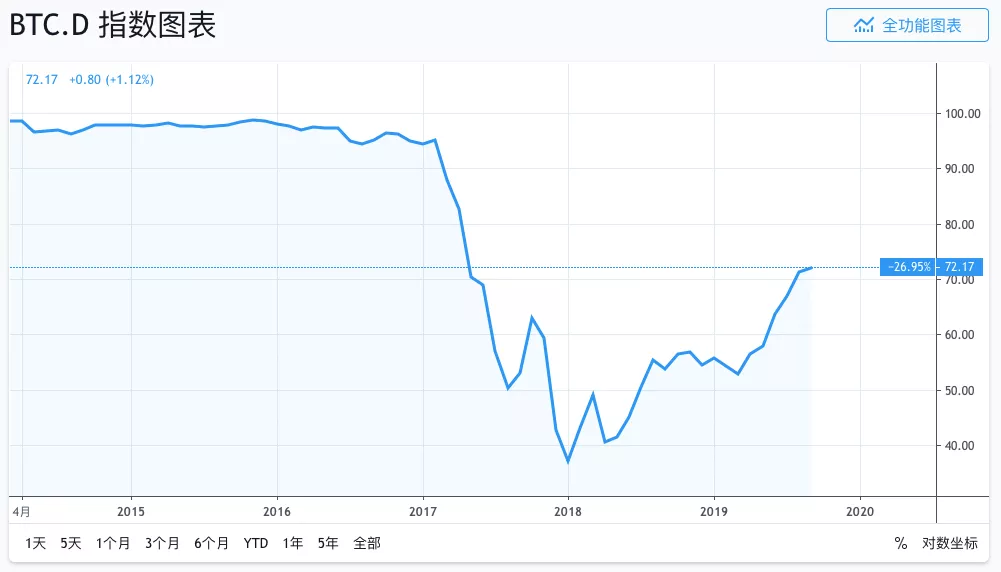 The Bitcoin market capitalization ratio, also known as Bitcoin Dominance, is a measure of the weight of Bitcoin in the field of encryption by calculating the market value of Bitcoin as a percentage of the total market value of all crypto assets.

Now, the market value of Bitcoin has returned to more than 70%, creating a record high since March 2017. What does this mean for the entire cryptocurrency market? What is the reason behind it? What is the next trend?

In this regard, the vernacular blockchain interviewed Han Feng, the founding partner of Yunlai. 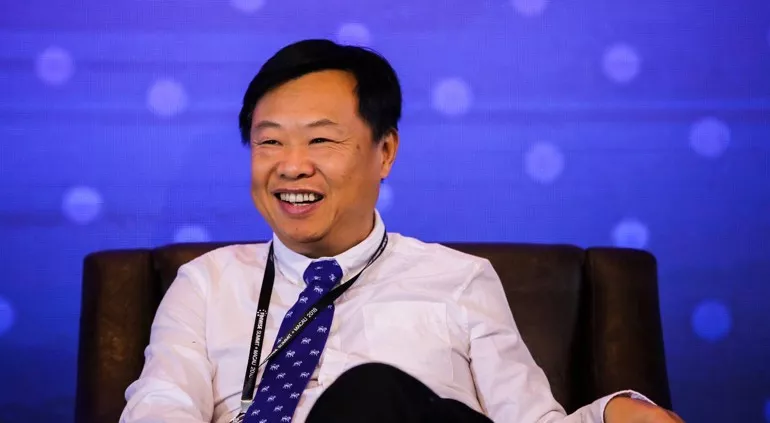 Vernacular blockchain: You have been in the blockchain industry for a long time. How did the impression of Bitcoin's market capitalization change?

Han Feng: Before 2017, Bitcoin was basically the protagonist, and no other project could threaten Bitcoin. In 2017, Ethereum once showed a tendency to replace Bitcoin, but it did not. Bitcoin’s market share has fallen back to its current high for the first time since it fell from its previous high.

Vernacular blockchain: In recent times, Bitcoin has outperformed, and its market value has risen all the way. At present, it is over 70%. What do you think is the main reason?

Han Feng: First of all, the most attractive concept of investing in digital assets is that there will be super-sovereign currency or encrypted digital currency in the future. Bitcoin is the first. Looking at it now, the concept of bitcoin super-sovereign currency has become more recognized. Bitcoin has become a network gold to some extent or encrypted global digital currency. This is also a consensus on a global scale.

Now the world economy or finance has encountered some problems, including the possibility of an economic crisis. When everyone feels unsafe, it turns out that people in our circle are hiding in Bitcoin. Now some outsiders have learned to use Bitcoin to protect property and hedge, and the whole group has grown stronger.

In addition, although a lot of encrypted digital currencies have been issued, especially in 2017, is it possible to challenge bitcoin status? I used to say that Ethereum has this possibility, as well as Litecoin, and BCH with hard forks. If only from the concept of encrypted digital currency and global super-sovereign currency, it turns out that at least they do not seem to be able to challenge the position of bitcoin at present.

In addition, the increase in the market value of Bitcoin this time, I think this has a certain relationship with the decline of Taifang itself.

Vernacular Blockchain: In the process of changing the market value of Bitcoin, what kind of investment philosophy do you agree with?

Han Feng: I think that if you want to invest in blockchain, you must first establish a belief in bitcoin and blockchain. If you don't even believe in Bitcoin, there is no need to enter the blockchain industry.

In my opinion, bitcoin is a network of gold. If the original investment project is withdrawn, we will usually return the bitcoin, which will be considered to be the safest and most secure.

Vernacular Blockchain: Existing digital asset investments, what opportunities are you still optimistic about?

Han Feng: It is very difficult to have new opportunities before the next trend. Take the trading platform, some people think that the opportunity is still on the trading platform. In fact, the development of several trading platforms in the head is very radical. For other latecomers, if there is no real breakthrough in technology, there is real innovation, competition for homogenization, there is no chance for a high probability, unless more advanced assets can be traded in the future.

Vernacular blockchain: When the “frozen concept” has passed, will the Bitcoin maintain its ratio and dominate the situation before the next trend?

Han Feng: Almost, there will be no essential changes. At present, it is still a bear market. Although there may be some waves in the middle, for example, some CX Groups are quite happy, but the same place basically can't keep going. It is not the right way. It will take three or four months to stop the food, and it will not really create value. .

03 The future development of the next bull market?

Vernacular blockchain: What do you think will be the next trend in blockchain development?

Han Feng: Personal opinion, it is unlikely to fire all kinds of Tokens again. The Tokens that are really useful in the country are estimated to be at most ten. Of course, there will be a bull market in the future, but it will not be a digital asset on the blockchain, but a data-type asset, such as a movie, music, and game equipment.

I have been smashing the encrypted cat before. This concept is everyone's willingness to listen, but why can't the project start? Without a credible computing environment, it is impossible to run a blockchain, and the blockchain itself is not a slightly more complicated application. A movie moves and plays, you have to protect it, you don't protect it and you are copied. Now you can use your finger on your mobile phone to send a copy of the movie to someone else. This kind of thing is not an encrypted data asset.

Bitcoin is limited in total and cannot be copied. Future digital assets must have a protected trusted computing environment if they want to run through Bitcoin. If you know this, you can understand what everyone is trying to do now. For example, in the United States, BlockStack has struggled for five years, and now it is compliant, and it can issue Token in the United States; social giant Facebook claims to be a data privatization campaign. , released Libra…

In fact, everyone is preparing for the same goal: in the future, through the blockchain trusted computing environment, you can trade your digital assets. I think the trade will form the next slogan. At that time, it is really not just a fake Token. If it is just a Token, the real currency concept may only be bitcoin, and others can't challenge it.

Vernacular blockchain: In the direction of trusted computing, including digital assets, do you think it will form a big one, or do you have a chance?

Han Feng: It's hard to say. What I see is that people who really understand are working hard in this direction, regardless of China or the United States. There are two or three projects in China, and there are several projects in the United States. Anyway, they are working hard in this direction. After a year or two, I dare not say that a family is alone, but it may enter the practical stage. In the end, who succeeds or several joint successes is hard to say.

Vernacular blockchain: The application of digital tokenized assets, is it related to technology? For example, can the alliance chain do?

Han Feng: The relationship should be very large. There are relatively high hard index requirements for the performance of the chain, such as TPS, trading experience, etc., as well as other supporting facilities, such as decentralized storage, decentralized communication, and operation. It is also time to be safe. The performance requirements are much higher than the normal chain, and it is not as simple as developing a chain.

Vernacular blockchain: Internationally, what is the current development trend of blockchain?

Han Feng: Judging from this year's situation, the United States is clearly working towards a compliance approach. Although it is not easy, the door to compliance is opening. American culture is also more conducive to innovation and encourages new technologies.

However, now discussing the blockchain project does not need to pay attention to which country's projects, real people of insight need to be based on global development of blockchain projects. If it is only developed in one country, it is still relatively limited.

The enthusiasm of China to participate in the blockchain is high, but the data shows that 20% and 30% of people in Korea are involved in blockchain investment, and China is far from this data. But I think China is a very important part of the development of the world blockchain and the foundation of the next bull market.

Message Mining No. 328: Do you think the market value of Bitcoin will rise? why? Feel free to share your opinion in the message area.

『Declaration : This article is a guest independent view, does not represent the vernacular blockchain position, and does not constitute any investment advice or advice. You are not allowed to reprint this article by any third party without the authorization of the "Baihua Blockchain" sourced from this article. 』

Zhang Jian: Danhua Capital already withdrew 600 BTC and other assets from FCoin as early as 18 years ago

Zhou Xiaochuan: From the perspective of protecting investors, central banks and regulators need to pay close attention to digital currencies

Analyst Xiao Lei: The speculation Buffett luncheon is a peak of marketing