At the beginning of 2019, the entire cryptocurrency market was once again ignited by IEO, and the bear market that lasted nearly a year was declared over. The currency of Launchpad started the first shot to the bull market, Sun Yuchen returned with BTT, up to a dozen times the increase, then Fire and OKEx launched Prime and Jumpstart.

However, half a year has passed. From the beginning of the currency, the “prohibition of Chinese participation” has “at least 5 times the revenue”. So far, the latest IEO project, Fire Network, has been broken into a second project. There are even some projects that break when they open. IEO has become notorious.

Will the IEO model become a short-lived or a catalyst for industry development like ICO?

Marketing is bigger than everything

Previous 31QU article "Get on the exchange's reputation, how long can IEO last? "It is pointed out that relying on celebrities and institutions to endorse, the model of IEO will not last long.

In June last year, the wave field acquired BitTorrent, a peer-to-peer sharing service company with nearly 100 million users, for $126 million. The BTT was subsequently launched in Citizen's open crowdfunding. The crowdfunding price was $0.00012. Repeating the path of TRX's red-hot year, BTT was snapped up and skyrocketed 10 times in 10 days.

When BTT has not been listed, it is necessary to maintain a hot publicity. Sun Yuchen announced on Sina Weibo that the individual provided the 10 million yuan for the news hot search party Zhao Yu “seeing the righteousness to be detained” for “just justice”.

The first IEO project of the fire coin, some people packaged the entire Internet cafe, as mentioned above, "hunger marketing", so many machine accounts may not be guaranteed to be able to grab. Image from the network

A younger brother wearing a US takeaway rider costume, sitting on the steps, using a notebook to watch the fire coins Prime snapped the page. Image from the network

Newton, the second IEO project on the line of the fire coin, was the platform of the CEO of the fire coin. District 31 does not evaluate whether it is appropriate for the CEO of the neutral platform to personally endorse the project site. However, Newton’s currency price should be “disappointing” the original intention of Qiye. According to statistics from Area 31, compared with the highest price, NEW has fallen by nearly 90%, and many investors have suffered heavy losses. "I thought that Newton is the key item of the fire currency. It is definitely not bad, so I bought it in a heavy position. I didn't expect it to fall into this way." A loser told investors about the 31st district. 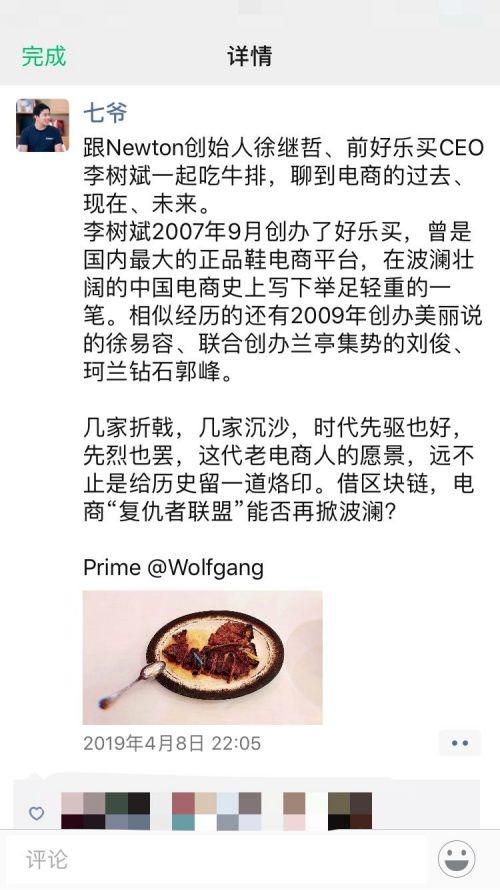 Half a year later, we have counted 51 IEO projects on the four mainstream trading platforms of OKEx, Coin Safety, Fire Coin and Gate. The data may give us some clues. From the statistics of the 31 districts, it can be seen that the IEOs of the four platforms have experienced a sharp rise and fall, and most IEO projects are difficult to maintain the price of the currency. Only a few coins and OKEx projects can maintain a good price, and the few hottest IEO projects have already been discounted, and the most have dropped by 80%-90%. We list the IEO data for the four major exchanges. (The data is as of 2011.9.11) 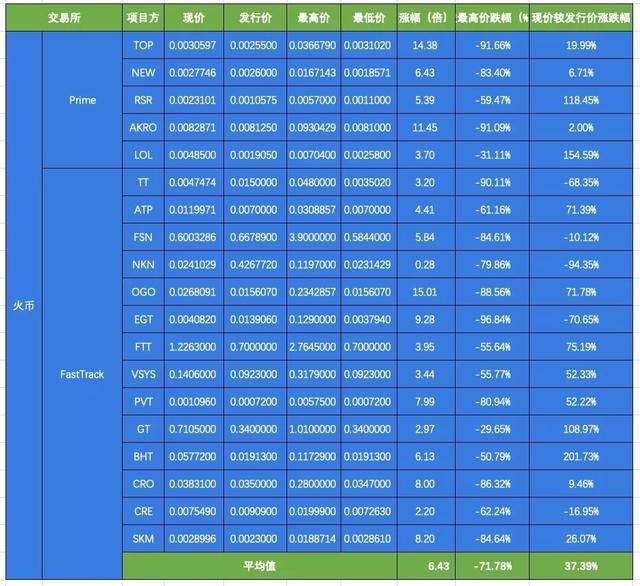 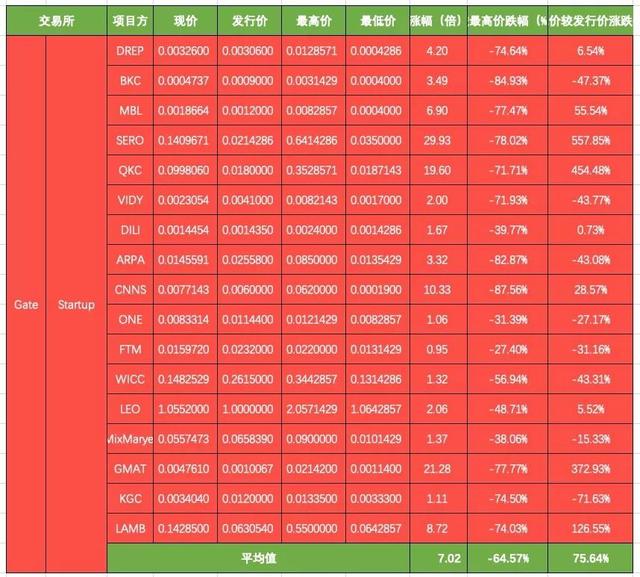 As can be seen from the data, the overall yield of the IEO of the currency security and OKEx is not much different, both above 140%, and the yield of 75.64% of the Gate is quite satisfactory, while the fire currency is bottomed by 37.39%. In terms of the number of IEOs, the Prime and Fast Track (predecessor of Prime Lite) of Firecoin ranked first in 19 times, Gate ranked 17 times, coins were 8 times in 3 times, and OKEx was the least, only 7 times. The highest increase is the ERD of the currency security, up to 46 times the increase, but after careful inspection in the 31 district, this price is only the price of the opening moment, the reference is of little significance. Gate's Sero, the main concept of anonymity, has a maximum increase of nearly 30 times. The TOP of the fire coin, OGO and other projects have also had a dozen times of increase, and it has been remarkable. OKEx's first IEO project, the building block cloud, was also very eye-catching with a nearly 18-fold increase. There is a rule through data observation that most of the higher-income projects are concentrated in the early stage of IEO, and the projects in the middle and late stages have few bright spots in the currency price.

The old rivals of OKEx and Firecoin seem to be completely different strategies in this wave of IEO. Firecoin is more like winning by quantity. There are many projects, almost once a week. OK chose a more conservative strategy. On average, it is basically once a month. From the point of view of yield, OK is successful. According to crtptorank statistics, OKEx's rate of return once led all exchanges. How does the exchange view the IEO or become a key

In the 2019 cryptocurrency market, Bitcoin and the platform currency of various exchanges are undoubtedly the best performers. IEO has successfully driven the platform coins all the way up and became the catcher of the exchange's revival. 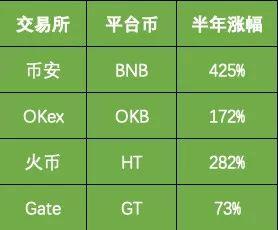 While IEO drives the market, the trading platform is also promoting the development of IEO. From the beginning of the spelling of the character to the gradual transition to the "loyalty", several major trading platforms have updated the rules and standards of IEO, the basic guidelines to improve the IEO Participate in the threshold and be more friendly to your own users. The longer you hold your own platform currency, the more the number, the easier it is to get the IOE winning award. In the new rules of IEO released by OKEx in the past few days, not only the old users who hold the platform currency are inclined, but this time, the old user benefits are additionally added, and the historical transaction volume of the users in OKEx is also covered. The historical transaction volume is more The probability of a big middle sign is also greater. One of them, in the latest rules, OK lowered the threshold for participation, and the holding of OKB was reduced from 500 to 100, but at the same time it restricted the need for users to participate through KYC2, which reduced the difficulty and prevented the wool party. A summary of the sentence: low standards, high requirements.

A few days ago, Costco, the largest chain member warehousing supermarket in the United States, first arrived in China. With the limit of selling Maotai and Hermes bags of “cabbage price”, the total market value of Costco also surged by 56 billion yuan. However, only three days later, The price of cheap luxury goods has returned to normal. The crazy citizens immediately calmed down and quickly queued up their membership cards. This is somewhat similar to the IEO, except that IEO continued to cool down after half a year. According to Coinschedule statistics, the total IEO financing amount reached US$1.65 billion in 2019, of which the Bitfinex exchange platform passes the LEO financing amount to US$1 billion. Regardless of LEO, the IEO financing amount is concentrated in March-August, and the monthly average financing amount reaches US$107 million. The IEO financing amount in July and August was 51.87 million and 65 million US dollars respectively. It is a fact that IEO is cooling down. IEO is a discounted way of selling. Everyone is involved in the mentality of buying lottery tickets. After a long time, this enthusiasm will gradually retreat and cannot support the heat of the whole market. At the same time, IEO also plays the role of a currency channel, becoming a way for institutions and onlookers to enter the market.

The way the IEO should start in the second half, the attitudes and practices of the exchanges will be the key factor. In fact, we not only observed the four major exchanges, but also the IEO projects of many small exchanges, but the results were really terrible, the quality of the projects was uneven, and even the morning of the project and the exchange did not talk about the interests. The cancellation of the Oolong incident. The IEO of the non-head exchanges has flooded the secondary market with a large number of inferior projects, making the money itself even more bloody in the scattered altcoin market. District 31 hopes that exchanges will be able to treat IEOs in an open but standard manner, especially in the head exchanges. After all, the halving of the BTC next year is the highlight. 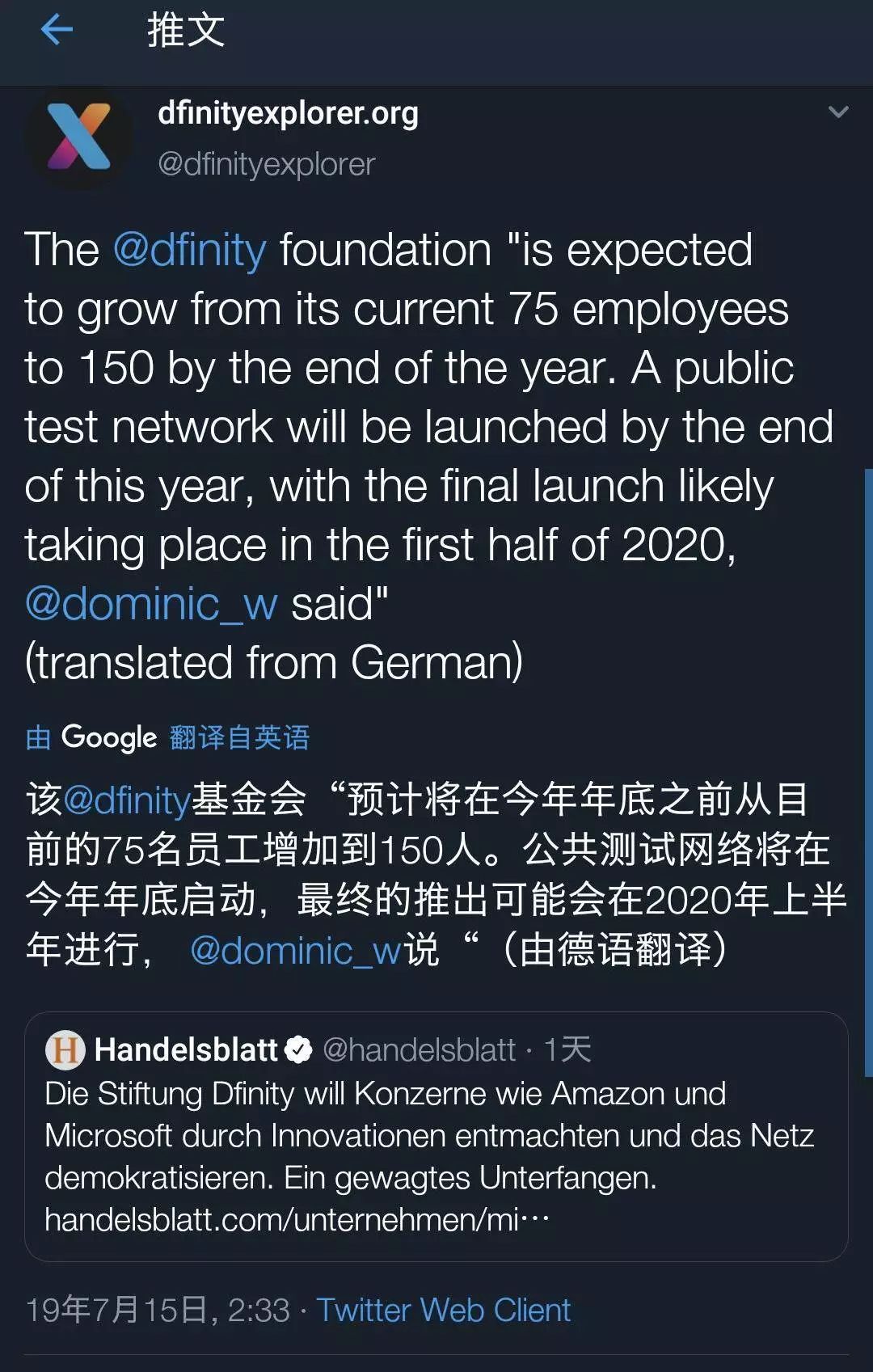