Decentralized finance ("DeFi"), also known as open finance, is one of the areas of cryptocurrency that has received significant attention to date. At a high level, DeFi's goal is to create many of our existing financial systems today (eg, loans and derivatives), but in an automated manner and without the need for intermediate presence. Since DeFi is still in its early stages, the content of this article is mainly about my thinking about Defi's development and some interesting possibilities that may arise.

One of the main complaints about DeFi is that it requires over-collateralization to get a loan (MarkerDAO's minimum mortgage rate is 150%) . Who wants to lock in so much money in the system? The reason is that the use of capital is extremely inefficient, and many people initially have no additional funds. However, DeFi has locked in $500 million, which indicates that there is still a demand for it. 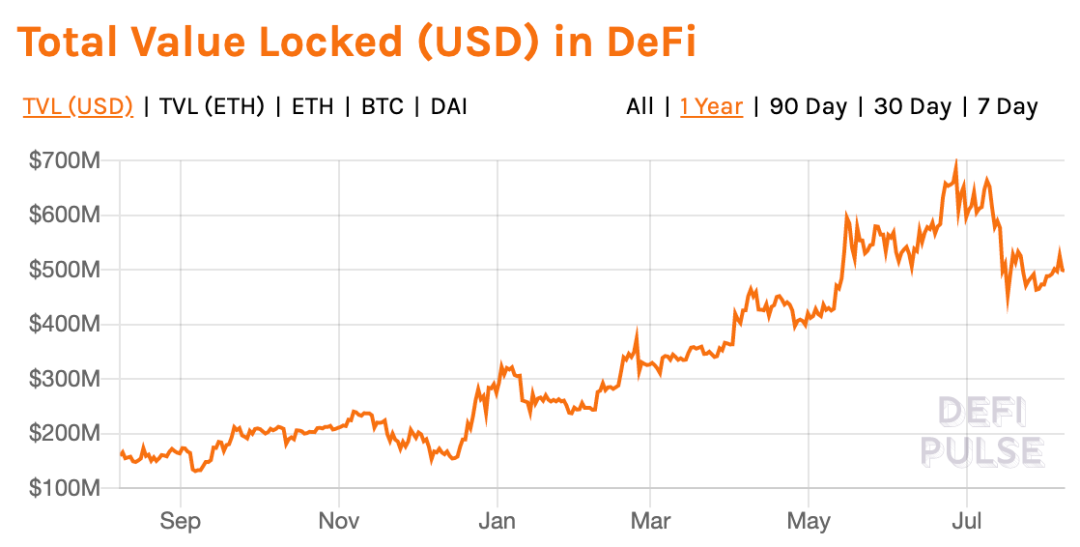 The purpose of this is usually for leverage, especially during the bull market. For example, you lock in the $200 ETH to borrow a $100 DAI, and then you can use it to buy another $100 ETH. Another main reason is that people don't want to sell their coins (which will involve paying taxes), so they may be more willing to use mortgages to make loans.

Another reason people use DeFi is that it is more streamlined than traditional financial systems because users don't have to complete the complex real-name certification process (I think this will eventually change for many projects). In addition, some people who cannot use traditional financial services may also find the benefits of DeFi, but I believe that once the mortgage rate declines, the use of DeFi will change significantly.

However, it is worth noting that we are still in the early stages of DeFi. Complaints about overcollateralization are due to the lack of a proper decentralized identity and reputation system in early systems. Without these and problem-solving legal systems, the only way to reassure lenders is to over-collateralize.

Whether or not people think the system should exist, the need for it is obvious, and the existing DeFi project is actually very easy to use. If borrowers don't want to sell their cryptocurrencies, especially if they are excluded from the traditional financial system, then sometimes the borrower has no good choice.

The lender's possible choice is because they cannot earn interest on the currency they hold, or they exist in a bank account in French currency, and the bank lends the deposits and withdraws most of the interest earned. Even if we still have a long way to go, DeFi is an important step for both parties.

Once a better identity and reputation system is added to DeFi, we will see that the collateral requirements will decrease. There are currently several credit management departments in the United States (such as Experian, TransUnion, Equifax) who can provide personal credit status to other institutions such as banks.

Decentralized identity and reputation systems can provide similar things, including social media reputation, past loan repayments, and guarantees from other reputable users. However, such an approach requires a lot of trial and error, such as what data to use and how much mortgage is needed.

BTCJam (District's Note: Point-to-Point Bitcoin Lending Platform, closed) has long ago made such an attempt. They use their own proprietary credit scores and provide the appropriate interest rates. Developers developing DeFi systems can learn from the experience of BTCJam.

One of the most unique aspects of DeFi is composability. The agreement can be assembled like Lego bricks to create something new. Even mortgages are being applied to systems with superior liquidity. For example, you can get collateral from one agreement and then lend it on another.

I am very concerned about this, because the cumulative risk of smart contracts is very large, the whole meaning of over-collateralization is to prevent the borrower from returning the principal of the collateral. If the collateral is lent out elsewhere and there is a problem, the collateral is no longer useful.

Although I am not satisfied with this "very liquid" system, I think that because of the inefficiency of large amounts of money being locked in, people will inevitably start to try this concept. I only hope that people can adjust themselves, and perhaps set a threshold like the minimum mortgage ratio.

There are more platforms where users can deposit their funds and then lend them to the highest interest rate DeFi protocol (such as MetaMoneyMarket) so that users don't have to manage it themselves. Users can also make a variety of customizations.

For example, you can set the loan amount of the fund to X% to reduce the risk of smart contract, and only lend to a specific agreement. If the interest rate is lower than Y%, the funds will be returned, or the stable currency will be switched according to the interest rate (for example, USDC to DAI) selection.

These processes are very friendly to users who are unfamiliar with cryptocurrencies after abstraction. For example, users are no longer prompted to choose which DeFi protocol to use, they only need to conduct a risk tolerance test and then choose the DeFi protocol that corresponds to the risk score. I really like to bring more common assets like Bitcoin into DeFi. In the bull market, I believe there is a lot of demand for Bitcoin leverage to use DeFi, if it is convenient to use and the cost of creating and redeeming is low.

I believe that cryptocurrency holders are the best able to provide a centralized version of this product because the funds are locked in by their customers. Many large investors are required to use a qualified custodian to keep their funds, so for some people, they do not need self-regulation.

For the custodian, this may be another source of income, they can represent the assets under custody (tokens) and then allow people to trade. WBTC already exists, but the high fees hinder its adoption on a large scale. I think these costs will drop as competition and users increase.

For example, Coinbase Custody was launched in July 2018, charging 10 bps per month, and in August 2019, it charges 50 bps per year, which I believe will be further reduced over time. Ultimately, the decentralized version of the certified assets will coexist with the centralized version.

Currently, the vast majority of people who use DeFi are familiar with cryptocurrencies. However, in the future, traditional investors may start using DeFi or a system similar to DeFi. Now stable coins like USDC appear on the DeFi platform and are used for lending.

Although DeFi is very attractive, it is important to recognize the risks it poses. Since these systems are new and some only run for a few months, there is a clear risk of smart contracts. Smart contract risk becomes more complicated when these protocols interact with each other and rely on each other . If this risk does not exist, there will be a lot of borrowing on the DeFi agreement.

There is also a risk of the type of collateral used to support the loan. If the price falls so fast that the margin call still does not cover all of the borrowed funds, even excessive mortgages will not offset the volatility of certain assets. There are currently reasonable over-collateralization rates and acceptable collateral types on certain platforms, and potential loan defaults are not as worrying as smart contract risk.

I also believe that as the size of the deal grows, DeFi will have more regulation, such as the need for KYC, which may reduce the liquidity of certain projects and make it more difficult for people without proper documentation. This will vary depending on factors such as product type, jurisdiction and degree of decentralization (although people use “DeFi”, many projects are not decentralized at this stage).

Given these risks, there is a discussion around the use of decentralized insurance to hedge risk. You can do this by predicting the market, such as Augur, by betting on the existence of smart contracts on the agreement, and if there are problems, then you are paid. However, it is worth noting that these methods still have a greater risk of smart contracts. If the size of DeFi becomes large enough, traditional insurance companies may also offer products.

Another potential problem is that many DeFi platforms have very low interest rates, which may be unrealistic for some people whether they should borrow or lend on the DeFi platform. Interest rate swaps may occur in the future to lock in different interest rates for premiums, but this also adds to its complexity.

In general, it's important to understand that we are still in the early stages of DeFi, but with great potential. Not only are more people excluded from the traditional financial system able to use financial products, we will also see financial products that we have never seen before. We can see a clear focus on DeFi from developers and users. More specific feedback on individual projects is always helpful and more productive.

DeFi has seen a significant increase in mortgage assets in the past few months, but the reason is that ETH has increased significantly, and the growth of ETH mortgages has not been too prominent compared to the increase in ETH.

The chart below shows the growth curve of DeFi collateral value after removing EOS, BTC and Edgeware. It can be seen that the value of lockouts has increased rapidly since February.

As can be seen from the figure below, the ETH mortgage amount under the same option does not grow as fast as the above figure, and there is a downward trend, and the DeFi Foundation Maker drops more.

For the problems faced by DeFi, contract risk and more users, there is still no good solution.

At this stage, many DeFi products are relatively short-lived, and there are many cases in which smart contracts are attacked. Users are allowed to hand over large sums of money to the code. DeFi products will take longer to prove their security and reliability.

Unlike Internet products , financial products that run small and fast and iteratively do not work. A small negligence in financial products can cause large amounts of money to become a bubble, with serious consequences. If you want more people to use your financial products, you must first solve the user's trust problem, which is an important prerequisite for getting more users in addition to lowering the threshold.

As stated in the article, high mortgage rates are also one of the limitations that hinder the widespread use of DeFi. The paper proposes solutions through decentralized identity and reputation systems, such as social media reputation, past loan repayments, and other Guarantees provided by reputable users, etc. Credit scores are applied to users to reduce mortgage rates and greatly increase the usage of DeFi.

What do you think about this point of view? By decentralizing the identity and reputation system, as well as other users providing guarantees, while reducing the mortgage rate of DeFi products, without significantly increasing their risk, how long do you think this idea can be achieved?

Disclaimer: This article is the author's independent point of view, does not represent the position of the Blockchain Institute (Public Number), and does not constitute any investment advice or suggestion, the image source network.

Chairman of BOC: For the entire financial community and banks, the potential for blockchain scenarios is huge.

South Korea MIST Committee: It is necessary to further discuss whether to include the cryptocurrency field in the blockchain industry revitalization