About ten days ago, a Bitcoin whale transferred 94,504 bitcoins worth more than $1 billion in a transfer, which transferred from a number of unknown addresses to another unknown wallet. Some Twitter users have suggested that this transfer may be related to Bakkt. According to previous reports, Bakkt is expected to launch its hosting service Bakkt Warehouse on September 6, and launch physical settlement bitcoin futures at the end of the month. Although smart contract pioneer Nick Szabo commented on this $1 billion BTC big transfer on Twitter, maybe this person is very confident about Bitcoin, but the transfer of 94,504 bitcoins is a bit 'death'. . But what we have to admit is that transferring such a huge amount of assets at once is a little scary, but it is really cool, isn't it right?

In the digital currency world, whales have always been a special group that is not mysterious, but always affects market sentiment. According to a report released last year by research firm Diar, 55% of the total amount of Bitcoin in the current market is controlled by a 1% wallet. Therefore, the whales have the ability to impact and even determine the direction of the market.

And after ten days ago, this amount of amazing transfer occurred, Reddit's last post triggered a hot discussion among netizens. The topic of discussion is, now and in the future, how many bitcoins you have, you can call it a whale. ".

The user who posted this topic wrote: 10 years ago, if you had 10,000 bitcoins, you wouldn't be a real whale because you can only use these bitcoins for two pizzas. But this year, even if you only have 1000 bitcoins, you should already be a giant whale. After all, 1000 bitcoins have already exceeded $10 million. So after many years, is there a 100, 10 or even 1 bitcoin that is eligible to become a bitcoin whale?

After the question was thrown, the netizens gave a lot of interesting answers.

The netizen with the ID of hashamadeus gave a "rigorous" answer – 6.15. However, this figure is not further explained. Users with ID brando2131 explained this number with the logic of "a serious nonsense". 6.15 is a subtle result. You should work hard in the 20s to earn 6.15 bitcoins and then take 0.15 pieces. Used as a reserve fund for emergencies, one forever for the elderly, one for the 30-60 year to buy whatever you want, and three for fun. However, for this explanation, many netizens said that "the mathematics teacher's coffin board can't hold back." "Which one bitcoin was eaten?" Moreover, this explanation and the problem of becoming a giant whale are obviously a bit off the mark. 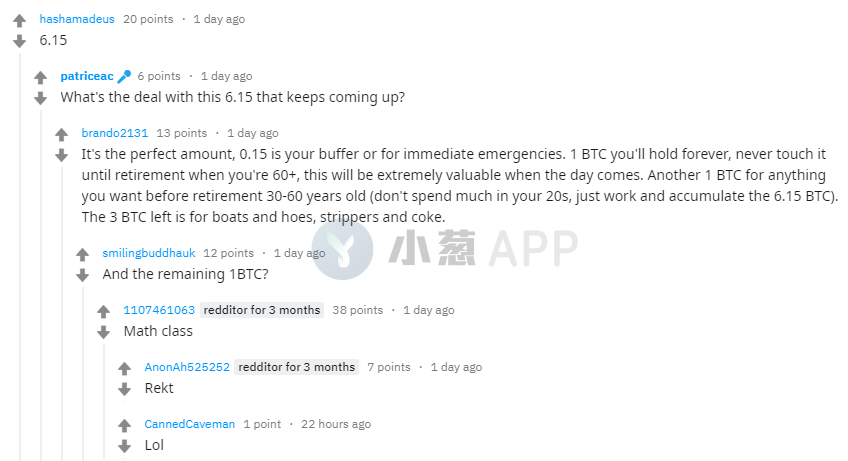 The netizen with IDSurman gave a seemingly more objective explanation. He said that if the influence on the market is said, this quantity is not directly related to the corresponding dollar value, but should depend on the amount of bitcoin to occupy circulation. The proportion of the total.

However, some people have raised doubts about this point. Users with ID Lurlerrr said that there will inevitably be more and more individuals holding Bitcoin in the future, which will mean that the number of bitcoins that actually flow in the market will gradually decrease. In this case, the same amount of bitcoin will gradually increase its influence on the market when it is transferred in the future. Therefore, the ratio of holding bitcoin to total liquidity should not be used as a measure of the whale account.

Users with ID bitusher pointed out that according to statistics, as of April 2014, there are about 70 accounts with 1-10 million bitcoins. We regard these accounts as giant whale accounts, but over time, these accounts Bitcoin is sold or lost, and the number of accounts with 1-10 million bitcoins has dropped to around 40. Therefore, the user expects that when the number of accounts with more than 10,000 bitcoins drops below 30, the threshold for the whales will decline. At that time, perhaps 1000 bitcoins are enough to become whales.

At the time of writing, discussions on this topic continued, but the community did not seem to reach a preliminary consensus on this issue, but one thing is certain, maybe after many years, a bitcoin may indeed be worthless, but consider The total amount of 21 million pieces is set to exist, so the transfer of one bitcoin will not have a strong influence on the entire market.

In short, if you want to be a whale, it doesn't really matter how much bitcoin is worth. What really matters is the amount you hold, which can account for the proportion of total circulation in the market, with the position of Bitcoin. More and more scattered, the threshold for the whales may indeed decline, but for now, holding more than four digits of bitcoin may still be a "minimum standard."

Li Lin: The real competition in the blockchain industry has not yet begun.