Today's BTC trend continues to maintain downward adjustment. The four-hour trend has been falling for 6 consecutive years. The volume can continue to flow out, the market sentiment is sluggish, the departure effect is enhanced, and the trend is still further downward. The hourly Bollinger Band is closing. The attitude, the short-term trend into the rhythm of the shock.

At present, the Bollinger Band is running up the lower track, but the middle track is suppressed downward, the upward movement is lacking, and the trend will continue to maintain the downward adjustment posture. The subsequent trend will enter the downward trend of the shock.

The STOCH indicator runs down at the 80 level. The RSI indicator bends downward and the trend enters the downtrend phase. The current signs of heavy volume are not strong. There is still a chance of rebound, and the short-term trend will continue to adjust downward.

The operation suggestion is low and low. Follow the empty list near 220 to see the 210 position, pay attention to the upper resistance 220-225 position, and the lower support 210-205 position. XRP rebounded to the 60-day moving average support yesterday and broke through the 5-day moving average resistance. However, it failed to stabilize at the top, and the trend once again entered the heavy-duty posture. The four-hour Bollinger band closed, and the short-term trend could be sluggish. Will enter the trend of shock and glue.

Currently around the 0.29 adjustment, the shock zone has been formed, the market sentiment is biased towards the short but not strong, the overall is still based on the rhythm of the shock.

The operation suggestion is much lower at high altitude, focusing on the upper resistance of 0.3-0.31 and the lower support of 0.28-0.27. The current trend is supported by the 10-day moving average to temporarily stop the decline, but there is still a possibility of a downward trend in the 5-day moving average. The short-term market airdrop sentiment dominates and the follow-up trend will continue to fluctuate downward.

The operation is recommended to be dominated by high altitude, supplemented by low and low, focusing on the upper resistance 75-77 position and the lower support 72-70 position. BCH continued its downward trend yesterday and continued to decline. It rebounded in the key support 10-day moving average. The short-term trend was upward. It has not touched the four-hour Bollinger Band and suffered a reversal of the mid-rail. The upside strength is lacking. The four-hour MACD indicator is down. The follow-up will enter the rhythm of the shock down.

The operation is recommended to be dominated by high altitude, with low and low auxiliary, focusing on the upper resistance 316-320 position and the lower support 310-305 position. 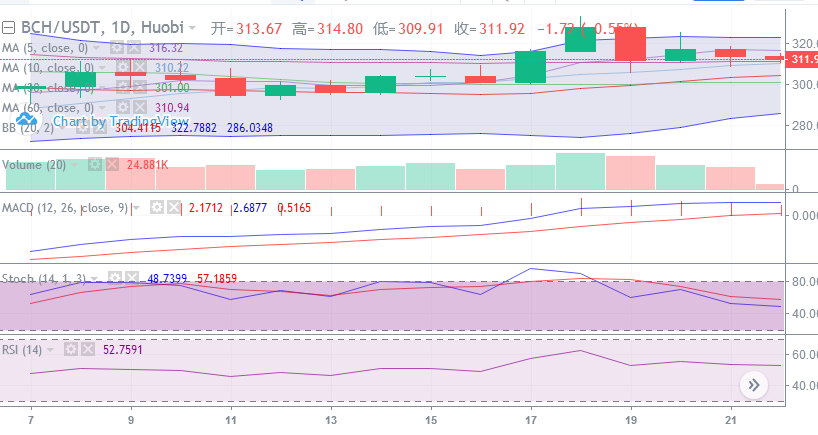 After EOS lifted its volume yesterday, it continued to maintain its upside posture and tempted toward the high point. However, the breakthrough ability weakened and was blocked at the high point. It was only after the 5-day moving average was stopped that the downtrend continued to rise, and the STOCH indicator was formed at the 80 horizontal line. The death fork, the overall trend has turned into the downward trend, the current short-term trend is on the upward trend, if you can further break the upper high resistance, the downside risk will decrease, once the callback breaks the key support position of 3.95, the subsequent trend will enter the downward trend. Among the trends, the current trend is adjusted within the shock range.

Short-term operation is recommended to be low-altitude. Once the position is broken, follow the trend and focus on the resistance at 4.07-4.1 and the support at 3.98-3.95. The pace of adjustment of the mainstream currency will continue. The amount of pies will continue to decrease in the near future, and the follow-up trend will continue to remain sluggish. The author's long-term recommendations are very precise. The key to effective strategy must be paid attention to. Suggest.

Take profit and stop loss when operating, and make safe and risk-free profit. Swiss Federal President: I am willing to promote the “Belt and Road” cooperation with China, especially in the area of ​​blockchain.