The block rhythm BlockBeats news, recently many Ethereum funds DAPP because the gameplay innovation has attracted a large number of players, some funds have joined the Fomo countdown attribute, and some funds have joined the "level mechanism" "burn mechanism" These functions have caused the Ethereum blockchain to be congested, and the number of confirmed transactions has reached the highest value of 120,000 this year.

The DAPP that caused the congestion of the Ethereum blockchain last week was called Fair Win. So far, the fund game contract has a total of 515,000 ETHs, which is about 750 million yuan. The game's popularity even surpassed the DAPP, Fomo3D, which allowed the Ethereum network to be congested in July 2018. In addition, the Fomo game has also appeared in the fund game. The fund pool of this type of DAPP is also very large. A prize pool called “Fans Feast” has reached 50,000 ETH (about 71 million RMB). ), and also contributed to the congestion of Ethereum.

The open source of smart contracts and website code is making a new batch of funds games abuse the blockchain network.

According to the data provided by the PeckShield security team to BlockBeats, the recent congestion in the Ethereum network was caused by a large number of transactions involving a fund game called Fair Win, which used Ethereum on September 22nd. 45% of the gas handling fee for the entire network.

According to BlockBeats, Fair Win (starting with 0x01EaCc) smart contract address was launched 6 days ago, generating up to 257,000 transactions in just 6 days. 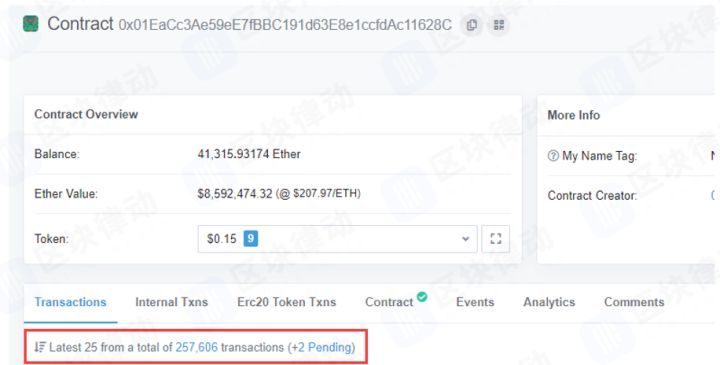 According to BlockBeats, the Fomo3D in July 2018 also caused congestion in the Ethereum blockchain network. In just one week, Fomo3D's smart contracts generated 240,000 transactions. This is almost the same as the network effect produced by current Fair Win. In Fair Win mode, players can recharge to smart contracts, charging at least 1 ETH, up to 15 ETH each time. The player's principal will be unlocked after 5 days, either cashed or re-invested. The bonuses and rewards generated by the game will be automatically released by the smart contract. 1-5ETH is a Level 1 member, 6-10ETH is a Level 2 member, and 11-15ETH is a Level 3 member. Different members have different bonuses, V1 is 0.5%, V2 is 0.7%, and V3 is 1%.

Seeing this, you might think that this is an ordinary fund game. But after digging deep into the rules, they will find that they have innovated the model: players must constantly recharge, otherwise they will not get higher returns.

This is not finished yet. The rules of the game are set. If the ETH balance in the player's account is lower than the sum of the ETH credits of the invited players, the bonus of the game will be calculated according to the player's ETH balance, which means that the higher income cannot be enjoyed. This forces the player to constantly fill the money.

However, since the game can be picked up at any time after 5 days, the game rules also set the "burn mechanism". If the game contract balance is zero, the entire game will restart. This also means that if the money is lighted up, the balance of the unsettled person and the network of relationships will be completely zeroed. In order to return to this as soon as possible, the player needs to quickly develop the offline to gain income, otherwise it is very likely that there will be a situation in which the funds have not been thawed and the game is reopened. The risk is extremely high!

Moreover, because Fair Win has adopted the smart contract open source approach, the new fund game that mimics its model can be launched and absorbed in a very short time. It is conceivable that 250,000 transactions were generated in 6 days, which is enough to block the Ethereum, which is basically not congested on weekdays. The evolution of the model of the fund game is further exacerbating this tension. In addition to the funds mentioned above, such as Fair Win, there is also a fund game that has joined the Fomo mode to speed up the congestion of the Ethereum network.

The earliest project of this fund mode is the “Fans Feast”, which is a blockchain fund game with a collection of funds + Fomo mode + direct distribution mode. The game was launched on April 9th ​​and was once promoted under the name of Blizzard Entertainment. It is essentially a fund game.

In this mode, different recharge amounts equal to different player levels, which means that different funds have static income. You can get direct rewards by inviting others to participate, and get dividends every day. In addition, the game also has Fomo function, inflow of funds. 15% of the prize pool, 70% of the funds into the Grand Prize pool, 30% into the small prize pool, the Grand Prize pool adopts Fomo3D's "flash" mode, each ETH entry increases by 3 hours, and ends up sharing the most investment 500 Players, the small prize pool draws a random 31 players every 24 hours. It is worth noting that the Fomo function is the "culprit" that caused the congestion of the Ethereum.

According to the block rhythm BlockBeats, the biggest feature of this type of FOMO fund game is the Fomo mechanism. The traditional blockchain fund game is too transparent because of the game mechanics. The player will collectively withdraw funds in the end and cause the game to crash. However, the addition of the Fomo mechanism has revived the game. Under this kind of game mechanism, players can harvest dividends, promotion income, grade income, grand prize pool, small prize pool income and so on.

This combination of funds and Fomo mode blockchain games allowed many fund project parties to see new model opportunities, and then a large number of project parties began to introduce this model. Because of the open source smart contract, developers can use a simpler modification to launch a more attractive funding DAPP, including the number one chain, and many other funds, using almost the same gameplay mode. 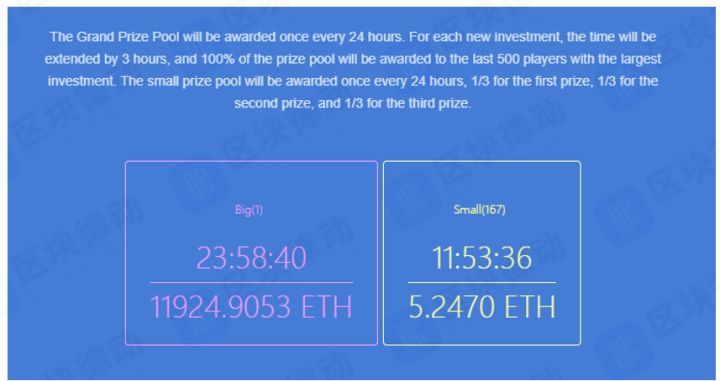 And because the minimum starting amount of 1ETH is set, the entire fund disk is of a large magnitude. This kind of game will never stop unless there is no fund personnel involved. Checked by BlockBeats, there are still 12,000 ETHs waiting for the lottery at the player feast. However, in the later period, the amount of funds was not high, and the award of Ether Business was only 490ETH.

However, the cost of this decentralization is caused by the congestion of Ethereum, which is exactly the same as the congestion that Fomo3D brought to Ethereum in July 2018. BlockBeats reminds investors that fund games and gambling DAPPs are highly risky, so please be cautious.

* Block Rhythm BlockBeats prompts investors to guard against high risk. The opinions mentioned in this article do not constitute any investment advice.

Shunyi District of Beijing plans to build a future school, which will introduce cutting-edge technologies such as blockchain