Organization members autonomously coordinate the deployment of shared resources in a decentralized organization with a Censorship Resistance to achieve a common set of goals – the unofficial definition of "DAO".

DAO's full name is Decentralized Autonomous Organization, a decentralized autonomous organization. As a direct example of “Code Is Law”, the most intuitive historical impression of it is the “The DAO” event that directly led to the hard fork of ETC and ETH in 16 years, which made it once famous for being hidden for many years.

To some extent, the "The DAO" incident is not the original sin of DAO. The problem may be that the audit of the code and mechanism is not perfect beforehand and the attempt to bring new things is too hasty. However, as the original chain, ETC refused to use the rollback transaction to retrieve the funds stolen by the DAO attackers, and decisively practiced the spirit of the irreversible blockchain of real transactions, and also drew a quiet year for DAO. Rest (of course, any choices need to be placed in the historical context of the time to see, this topic is not pressed first, history is slowly giving us the answer).

Recently, with the precipitation of the “The DAO” incident in 16 years and the explosion of the blockchain ecology, the governance practice of DAO has become more and more multi-dimensional and mature, except for the well-known MarkDAO and Aragon, DAOstack, KyberDAO in the Ethereum ecology. Etc. The extraterrestrial star projects Polkadot, Decread, Horizen, etc. are also actively trying. It can be said that the DAO governance trend is gradually rising, and it is in the ascendant.

DAO's biggest innovation lies in the subversion of the traditional governance mechanism. In fact, it is similar to the multi-signing mechanism (the original one (a private key) signature decision operation, now requires multiple people (multiple private keys) to sign the operation): Under the organizational framework of DAO, each individual has limited authority. All major matters require collective voting. Only the absolute majority is required to settle the implementation. Once determined, the contract (smart contract) is automatically executed, and anyone is irreversible.

Because all the holders participate in ecological governance, that is, Token=voting, and the management operation cost can be extremely low by cryptography, anyone can participate in ecological governance efficiently and conveniently, so the autonomy under DAO is more traditional. The company's structure is more extensive and completely true autonomy, and under the smart contract Code Is Law has truly achieved the absolute majority > key minority governance picture.

It may be worthwhile to have a new newsletter to look at it: the asset service in Gongxinbao has recently faced the risk of redemption. The reason is that the private key is kept by the founder Huang Minqiang in the daily work, but the founder of the survey now makes the business A few traps."

DAO (the moment) can solve everything?

This is a grand proposition. In the world of DAO, smart contracts or written code rules are laws, and letting them run spontaneously is the biggest rule of law. But can DAO really achieve this vision if it is actually running in a commercial scenario?

To put it bluntly, is Code and smart contracts (the current state of development) able to solve all problems? At least the current DAO operation process does not require the constraints and supervision of external strong departments?

For example, the author recently participated in a blockchain track competition of a financial technology enterprise. The organizer clearly uses the specified alliance chain architecture, and the author team will find in the process of commercial realization that the alliance node setting in it is difficult to avoid supervision. Witness participation in such powerful departments, because of the reality of business logic and scene construction, many issues such as notarization, execution, and legal aspects are very realistic, relying solely on Code, it seems thin and weak.

If you have the above-mentioned imaginary "metaphysical" feeling, then look at the following news that has recently appeared in the newspapers, and you will immediately realize the magical realism in the blockchain and Bitcoin world. 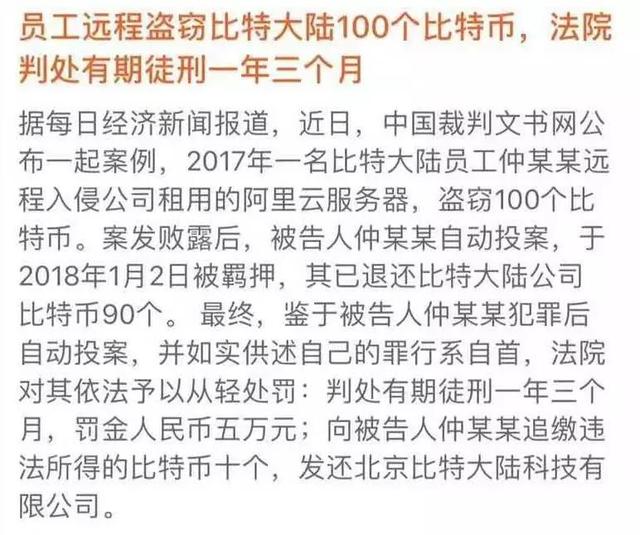 The importance of the private key is self-evident. For the individual, Bitcoin, as the top head company in the circle, has revealed two interesting points in this incident:

First, the security protection measures of the private key are obviously not enough. A single operation and maintenance engineer can use the private key to steal hundreds of BTCs in the wallet. As a digital asset, that is, the core company in the circle, at least the multi-sign should be strictly adopted. Protection mechanism to prevent excessive authority of single person;

Second, after the loss, Bitland chose the legal channel to recover the loss. Although it is understandable from the perspective of asset theft, it also shows that at least in the present, large-scale stolen data like digital assets, whether it is DAO or not. Still non-DAO, recovery of losses is the primary consideration, and this is absolutely inseparable from the traditional strong departmental system (it is worth noting that the employee is ultimately convicted of illegally obtaining computer information system data instead of theft);

This is also a trade-off. Just like the forks of ETH and ETC, there is still a lot of need to work between Code Is Law and the existing business social logic system. Everything still has to be dialectical. "Productivity determines the relationship of production." The purely autonomous vision portrayed by DAO still needs time to precipitate.

I couldn't help but remind the author of one thing. In the "The DAO" incident, the self-proclaimed hacker wrote an open letter to the Ethereum and the DAO community.

"I just studied The DAO's code and then used it. My behavior did not violate The DAO's terms. My lawyer thought that my behavior was in full compliance with US law…"

Hackers + DAO + encryption assets, in such a wonderful cocktail combination, still indispensable to the legal seasoning, even the parties have defaulted and did not feel uncomfortable, this may be a form of expression.

Michelle Bond: The final guide to the FCA in the UK sets a clear regulatory framework for cryptographic assets