How is Gas used?

Tether's transfer of USDT (and the use of Gas) has been growing, with recent peaks reaching 20% ​​of all network costs.

However, the Gas used to transfer ETH is less, and most of it is consumed by non-standard contracts (note: Other Contracts in the figure below), which requires more calculations. 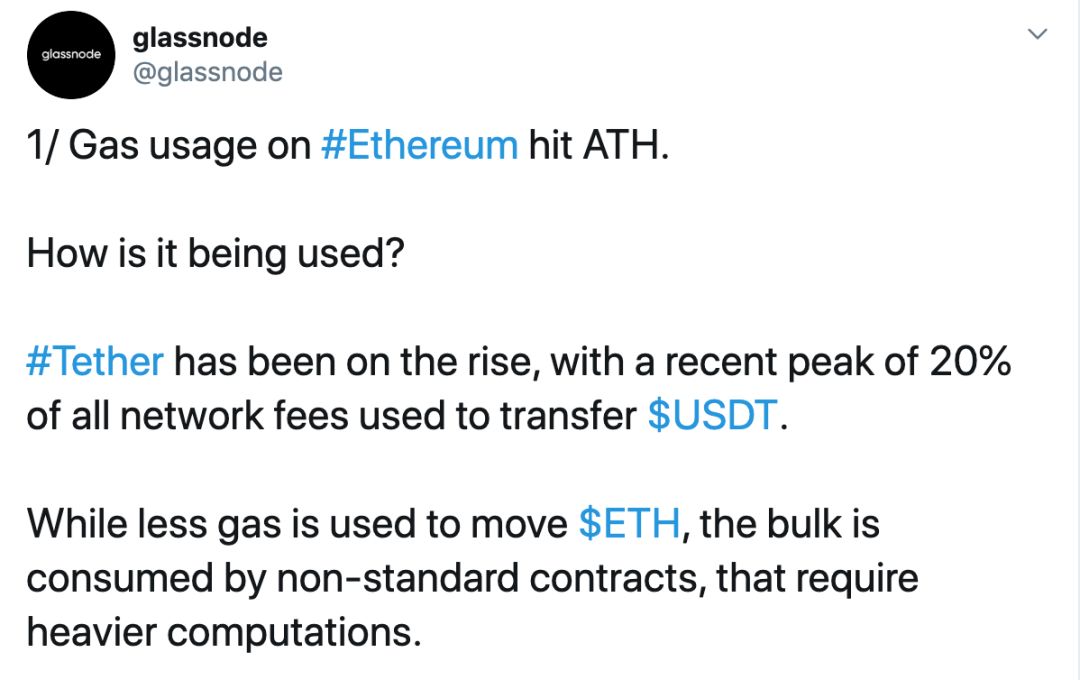 Last week, more than 25% of transactions were used to transfer Tether, which was less than 1% in June.

ETH's trading ratio is about 30%, and smart contract interactions account for 45% of recent transactions (mainly DeFi). 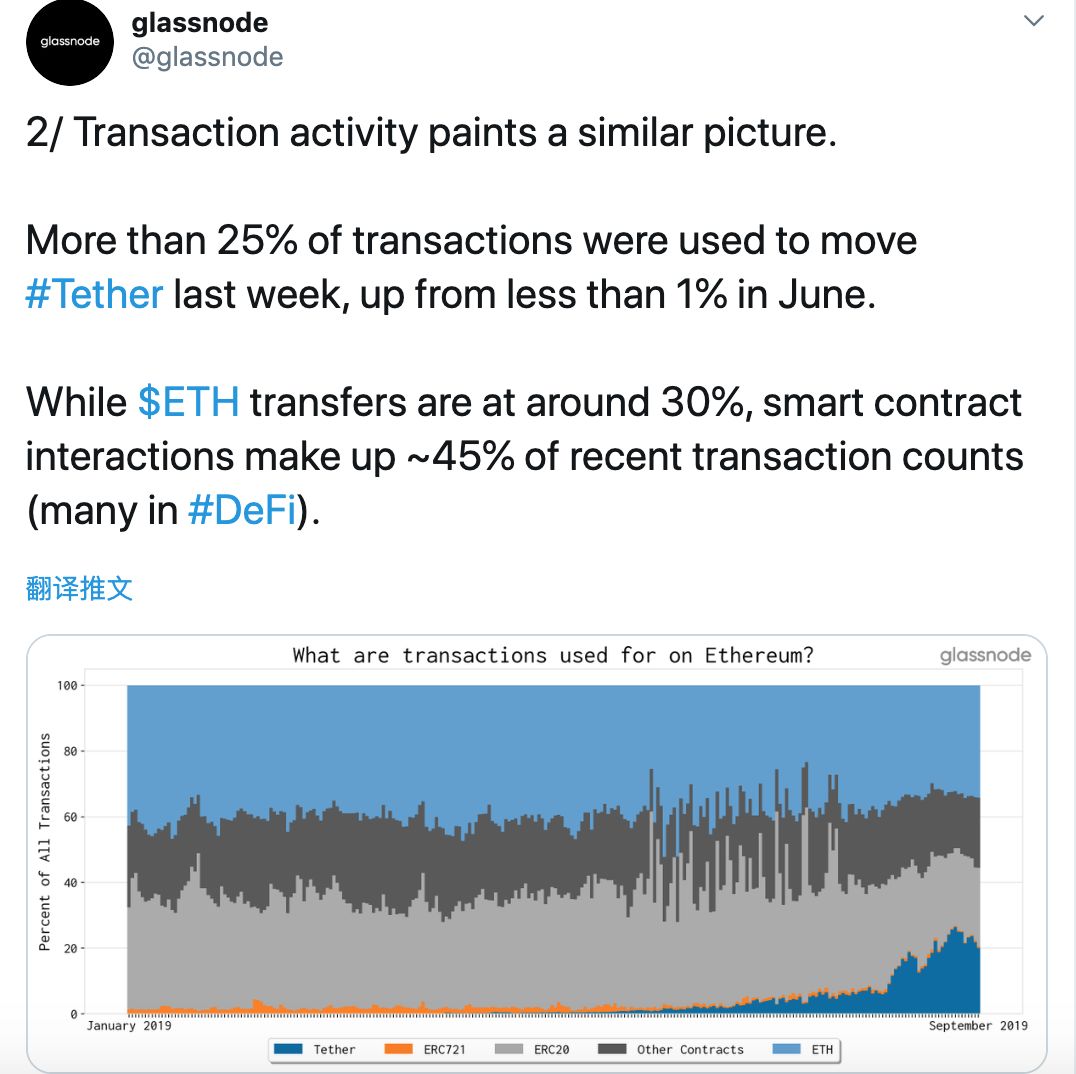 The idea that Tether promotes the adoption of Ethereum is not true.

Tether does not account for 20% of the use of Gas in Ethereum.

The use of Ethereum is robust; people now realize that (ETH) is oversold.

02
Ethereum transaction costs will exceed Bitcoin; Ethereum has no supply cap is not important

The cost is reversed.

Ethereum has briefly exceeded the cost of Bitcoin in the past, but now the Ethereum transaction fee is driven by Tether, and Tether's demand is constant. 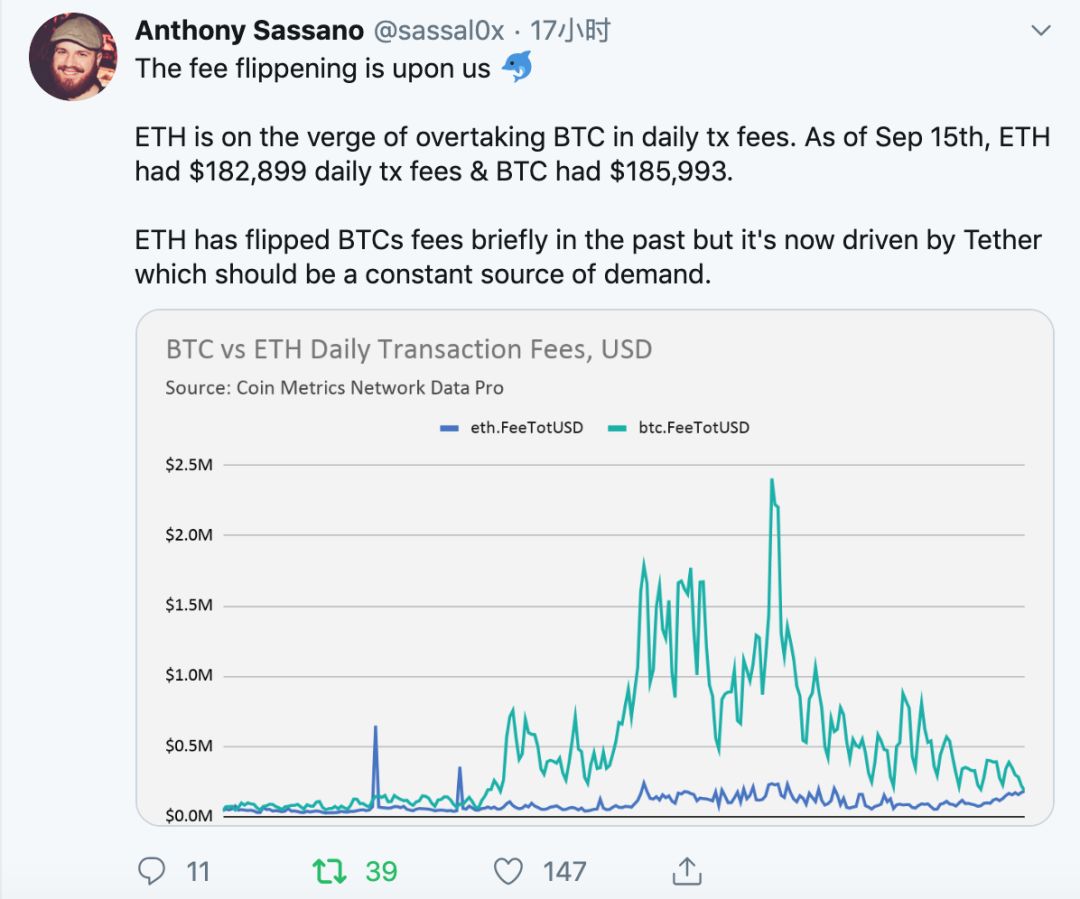 (Note: EIP-1559 is an Ethereum improvement proposal proposed by Eric. The proposal mainly consists of three parts: one is to increase the gas limit from 8 million to 16 million; the second is to set a basic fee for each block, and then The usage rate of the gas is used to dynamically adjust the handling fee. In addition, the handling fee of the block is not paid to the miners, but is destroyed. Finally, in addition to the basic handling fee of the block, the user can customize the tip to the miner. EIP-1559 is currently only a proposal. Can it be passed, and when it is passed is still unknown.)

These are the default settings of Ethereum 2.0. 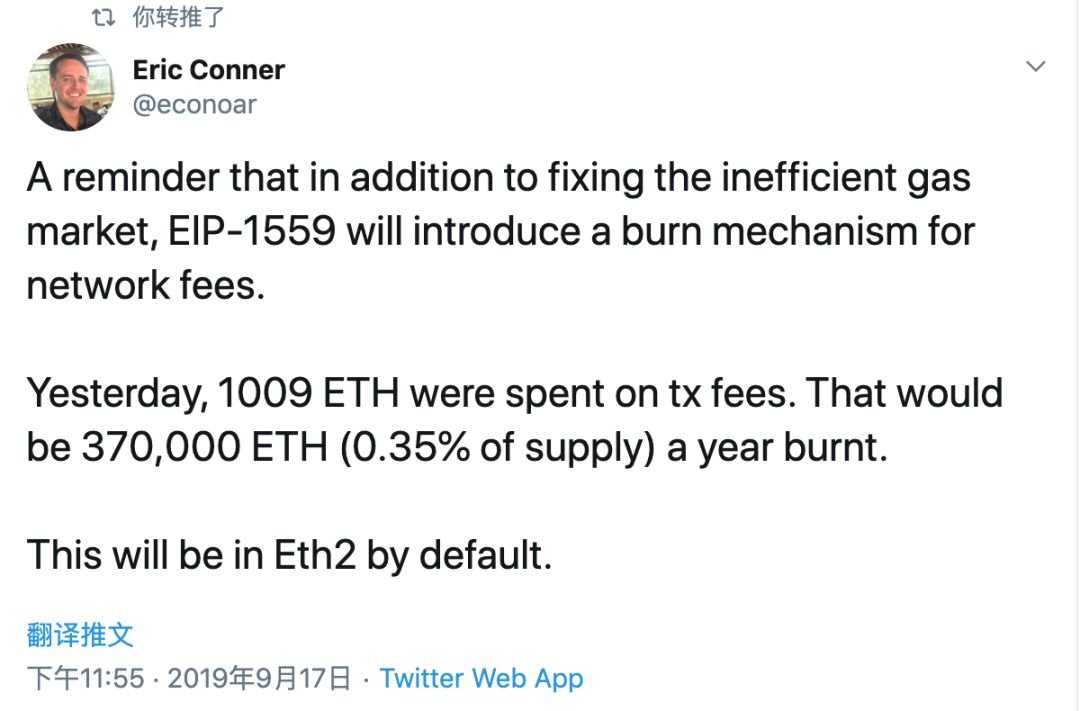 ( Note: In April of this year, V God mentioned in a proposal that when 2.0 pledges more than 10 million Ethanols, the ETS's issuance rate is controlled at 0.54%, and the maximum annualized rate of participation in staking is 5.72%. )

The destruction of 0.35% of the supply each year reduced the actual issuance rate to 0.19%.

Where Ethereum will be used:

– Slashed's Ethereum (the penalty for the pledge of the evildoer under the Ethereum 2.0 POS mechanism)

– Lock the bin in DeFi

Supply limit? The place to go to Ethereum does not require a supply ceiling. 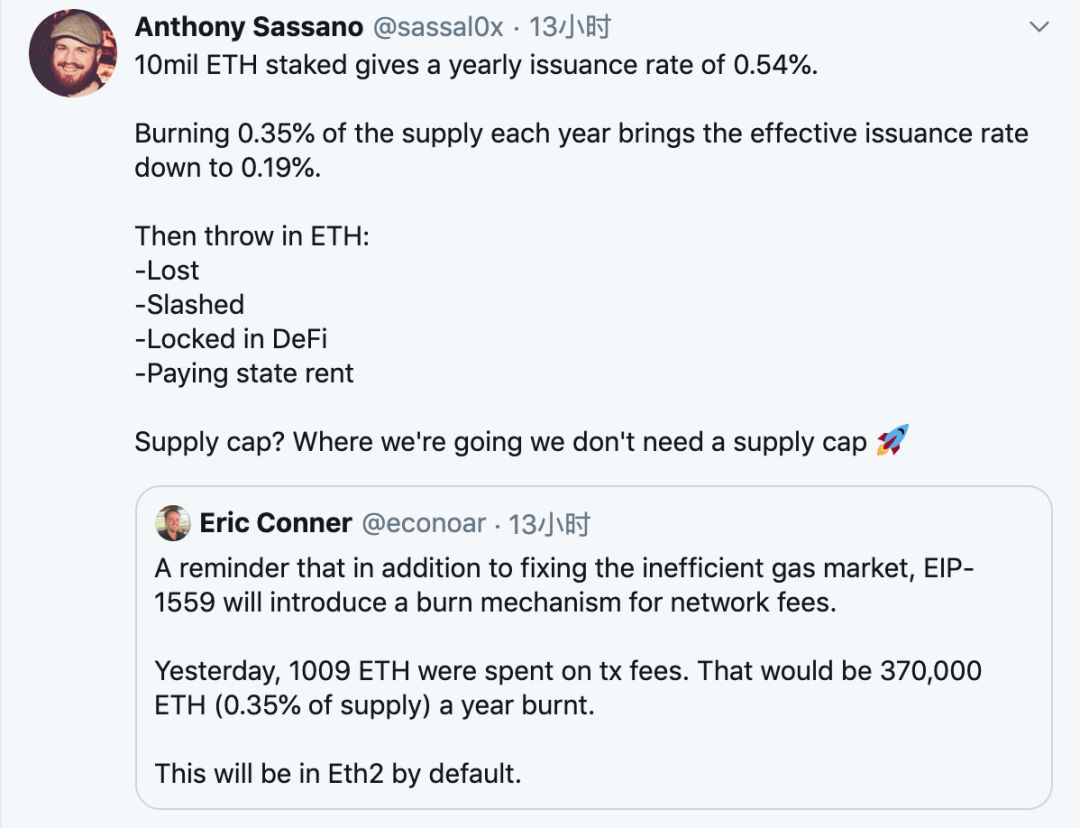 Finally, John, the founder of the Digital Collectibles Platform, made a summary:

I saw some very optimistic long-term trends in Ethereum:

– Gas usage is at a record high

– Compared with the Bitcoin handling fee, the (Eafangfang) miner's handling fee is increasing… This is a plus item for the long-term safety of the chain.

— Tether's flip, which is now more dependent on Ethereum than the Omni protocol. 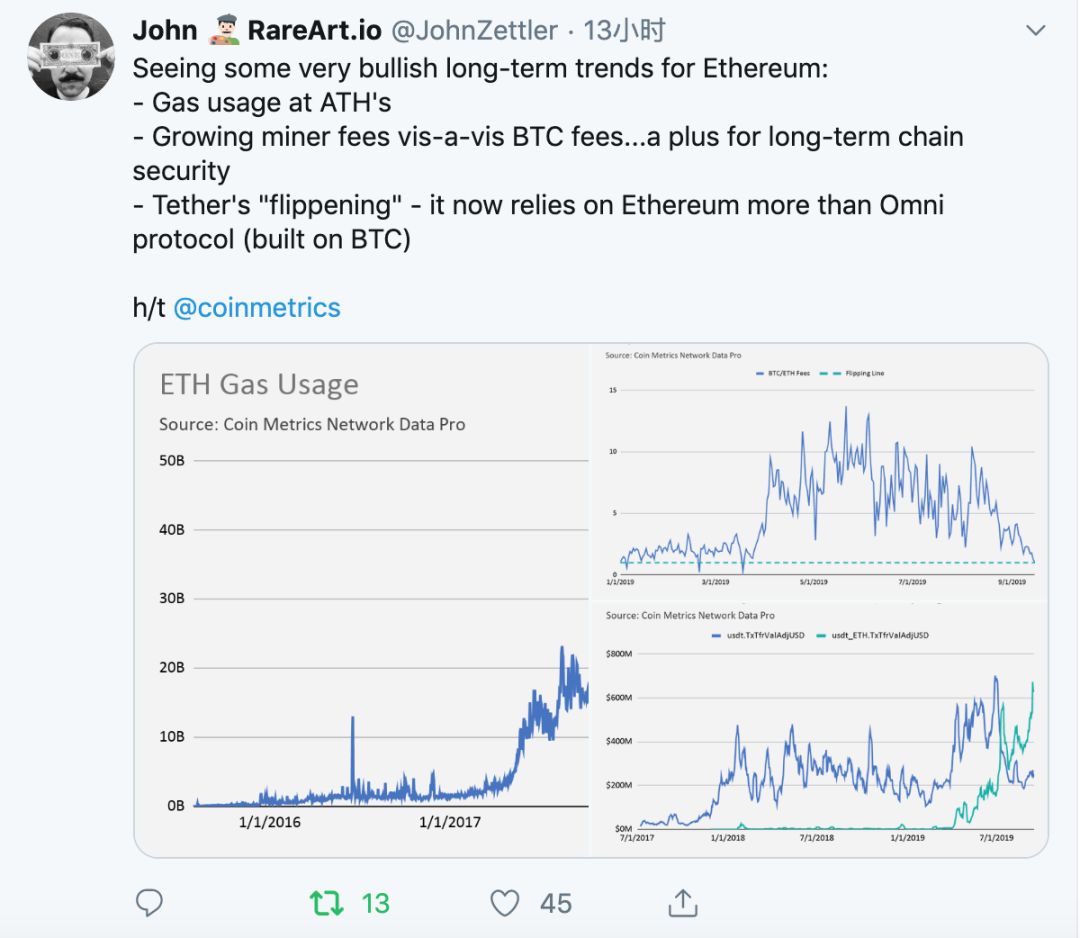 1. According to Cointelegraph, Japanese social communication giant Line (about 80 million daily) launched its cryptocurrency trading platform, Bitmax, which will initially support transactions in five currencies such as BTC, BCH, ETH, XRP and LTC. 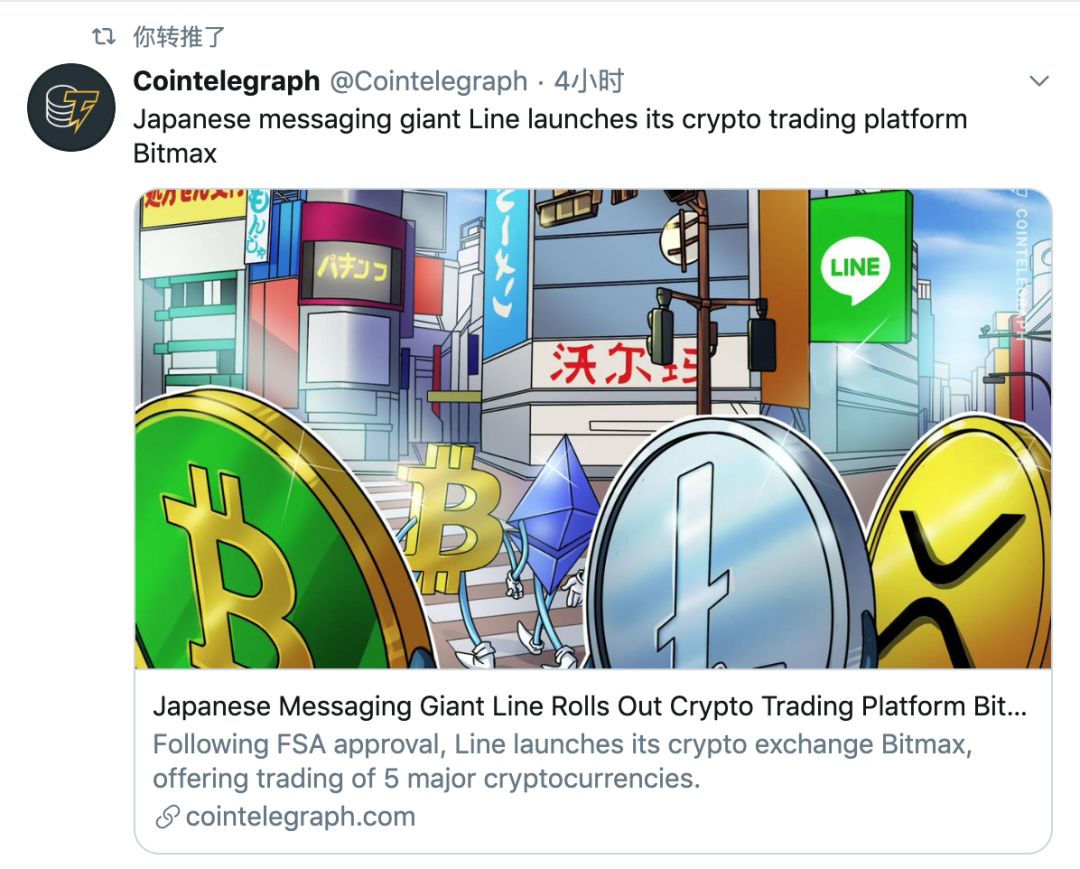 2. According to CoinDesk, VanEck and SolidX canceled the Bitcoin ETF proposal. 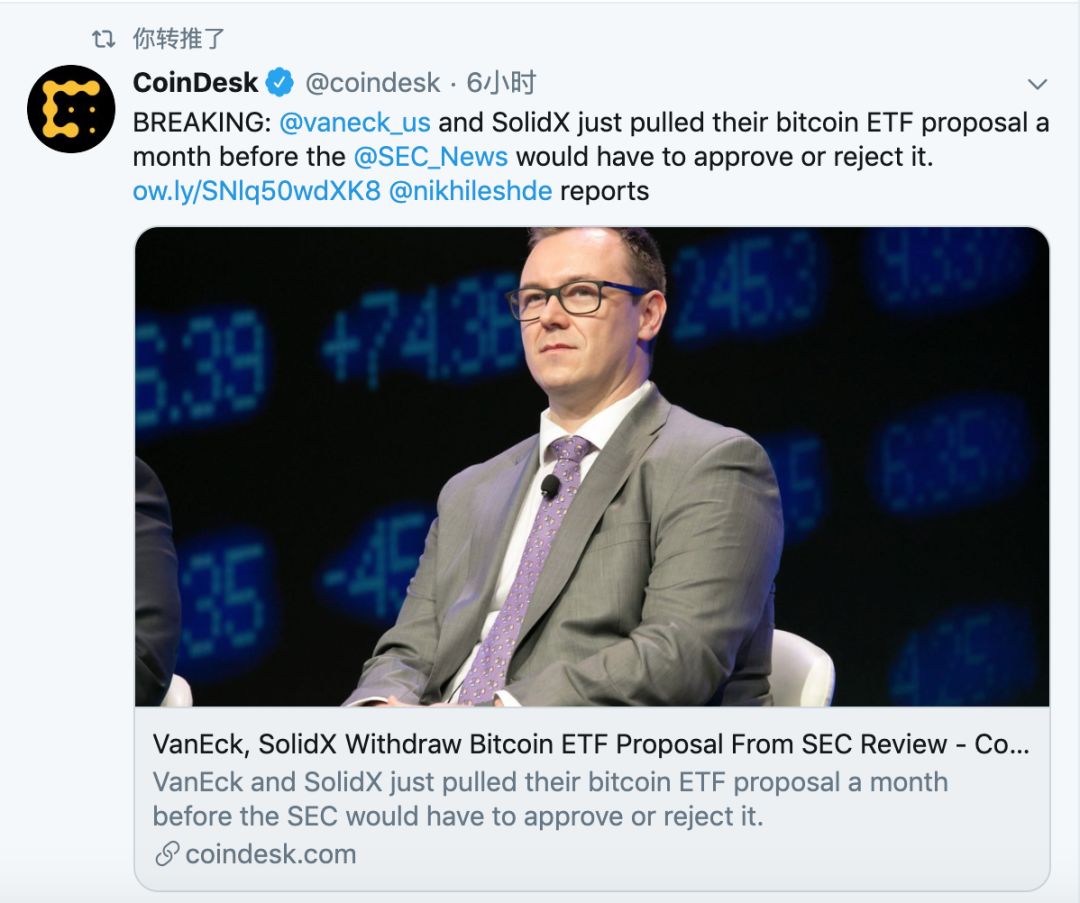 It is also a strange thing that the ETF has been postponed. The currency circle has long been used to it. CNBC encrypted channel host Ran NeuNer tweeted "now in 2097, the US Securities and Exchange Commission (SEC) has not yet passed the Bitcoin ETF."

3. According to CoinDesk, US financial giant Wells Fargo (note: one of the four major US banks with total assets of $1.9 trillion) is developing a dollar-linked cryptocurrency WellCoin, which will be in the company’s Run on the first blockchain platform. It is reported that WellCoin will be used first for internal settlement trials. 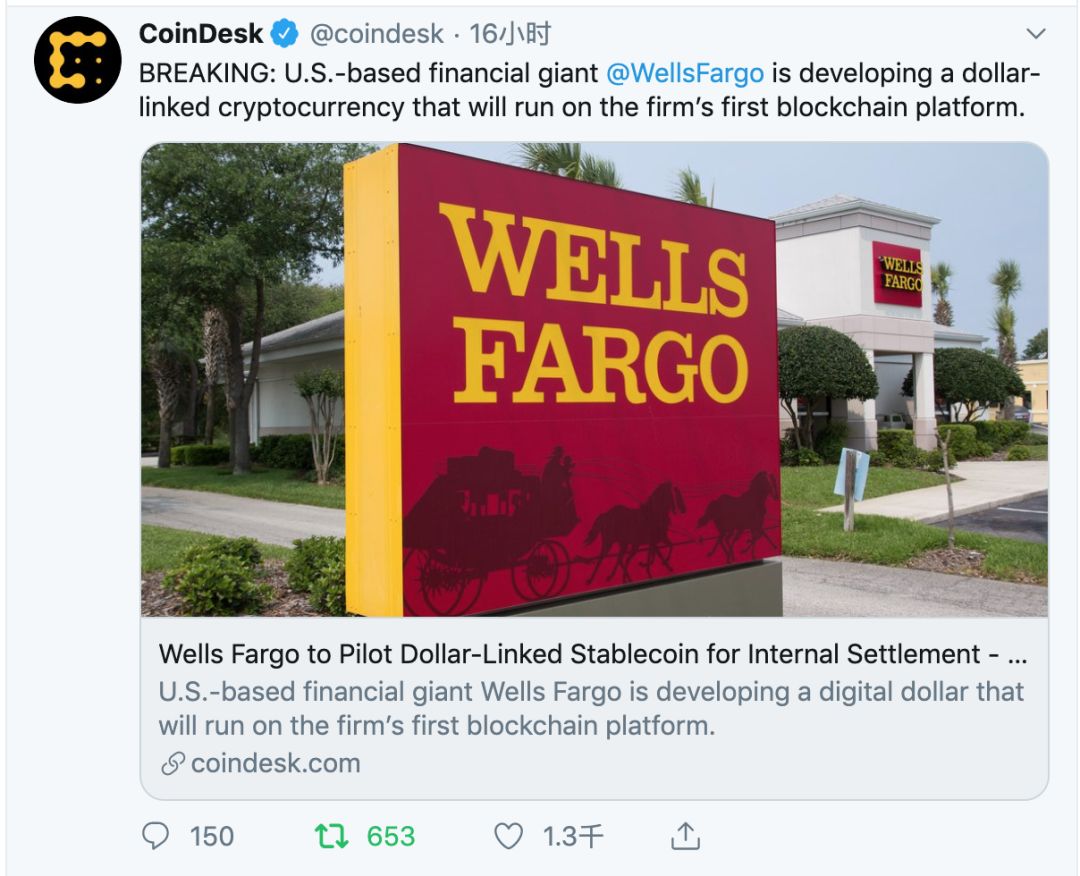 Huobi BTC reproduces a large amount of entrusted purchase orders, and the number of orders is close to 1000 BTC

Kava will invest $ 1.1585 million to fund ecological construction in the first quarter