The advent of bitcoin ten years ago was to de-intermediate the financial system. However, the centralized exchange still holds a large amount of cryptocurrency for the user. According to The Block's research, cryptocurrency exchanges currently hold at least $12.4 billion in Bitcoin, Ethereum and USDT (Tether).

At present, the well-known cryptocurrency exchange wallet has about 888,400 bitcoins (about 5% of circulation), 10.6 million Ethernet (10% of circulation) and 1.6 billion USDT (accounting for circulation). 39%).

It's worth noting that the exchange may control more wallets that are not yet publicly available and are not marked on BitInfoCharts, Etherscan or Tether. Some major exchanges, including BitMEX and Coinbase, which hold large amounts of cryptocurrency, do not have a public wallet address, so their data is not covered in this analysis. However, Coinbase announced in December 2018 that it manages a cryptocurrency value of approximately $5 billion, accounting for 5% of total bitcoin, 8% of total Ethernet, and 25% of Litecoin in circulation. In August of this year, Coinbase Custody also announced that it is currently holding $7 billion in assets for more than 120 customers.

According to The Block's research, the currency security currently holds $3.6 billion in bitcoin, USDT and Ethereum. This is followed by Huobi ($2.5 billion), Bitfinex ($1.8 billion) and Bittrex ($1.6 billion). 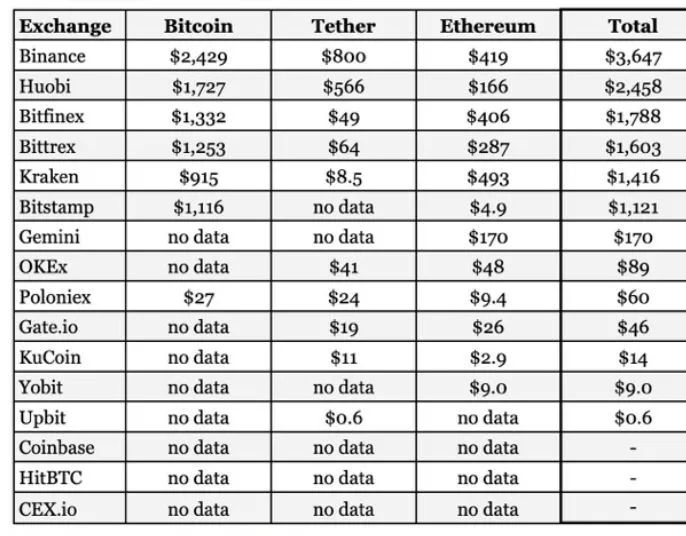 The currency cold wallet has the largest stock of bitcoin, with 234,700, followed by fire coins (166,800) and Bitfinex (128,700). The only exchange that may surpass the currency security is Coinbase, but since Coinbase stores almost all bitcoin in a wallet address of less than 7,000 bitcoins, it is difficult to track the total amount of balance without blockchain analysis. . Since January this year, the number of BTCs held by the currency security and fire coins has increased significantly. The total amount of money security positions increased by 31%, and the fire money increased by 54%. Bitfinex and Poloniex have the largest declines in positions. As the stable USDT expands to more and more platforms, such as Ethereum, Wavefield, EOS and Liquid, tracking USDT is no longer as easy as it used to be. But by analyzing the USDT (97% of the liquidity) on the Omni and Ethereum chains, it can be seen that the currency and the fire currency seem to hold the most USDT. In fact, the two exchanges currently hold a total of 32.5% of the total USDT. In terms of Ethereum holdings, Kraken was ranked first, followed by Chantel and Bitfinex. The three exchanges hold a total of about 6.3% of the total supply of Ethereum. Since January this year, the number of Ethereum held by the exchange has increased by about 38%, which is even greater than the increase in Bitcoin. Among them, Kraken's holdings increased by 55%, and the currency security increased by 53%. The Ethereum holdings of the Firecoin have barely increased or decreased in the past eight months.

Author: Larry Cermak
Https://www.theblockcrypto.com/genesis/39893/binance-holds-more-than-3-billion-in-customers-cryptocurrencies-trailed-by-huobi-and-bitfinex
PANews was translated and published as a licensee of The Blcok China.

Ant Financial Service Jiang Guofei: Blockchain enables digital assets to achieve credible circulation, and the amount of uplink will be an important indicator for the development of the digital economy.

What kind of cryptocurrency is the payment tool that people expect?

The last bitcoin futures contract on the Chicago Board Options Exchange will be settled on June 20th, Beijing time.

Babbitt Column | America First? Discrimination of the attitude of the Federal Reserve's two parties to the CBDC