The entire market plummeted across the board, and Bitcoin fell below $5,000.

The market manipulation problem has once again become the focus of attention, and the digital currency market has swept across the board.

Bloomberg reported in the early morning that in some digital currency exchanges, the market manipulation problem is extremely embarrassing, and the robots created by the trading algorithm make profits by sacrificing the interests of users by taking advantage of ordinary users.

Shortly after the release of this report, the digital currency plummeted across the board, and Bitcoin fell below $5,000. 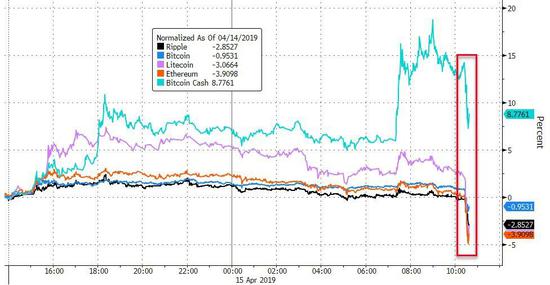 The report quoted research reports from Philip Daian and Ari Juels of Cornell University's School of Science and Technology, saying that on decentralized exchanges, some algorithmic trading is more direct and convenient, and some specially developed arbitrage trading robots can be used relative to ordinary users. The advantage is to directly participate in the transaction and profit from it.

The report points out that for companies deploying these automated trading algorithms, they have the advantage of being able to prioritize order processing by paying higher transaction fees, which allows them to see the order details of other users. This allows you to place your order in the first place.

Ari Juels said that although decentralized exchanges account for only a small portion of the entire digital currency market, user usage is expected to continue to grow. In addition, in centralized exchanges, such behavior may be equally embarrassing.

In the centralized exchange, how serious the illegal behavior is, we don’t know.

However, from the situation presented by the decentralized exchange, the transaction amount involved may be in the billions of dollars. The question of the manipulation of trading in the digital currency market has never been interrupted, which has become an important obstacle to the mainstream of digital currency.

Last June, Professor John M. of the University of Texas A paper by Griffin puts the “stabilized coin” Tether on the cusp. According to the paper, in the bull market in 2017, 50% of the increase in bitcoin prices was related to Tether being traded in exchanges, ie Tether was used to support and even manipulate numbers. Currency price.

In the paper at the time, Griffin said:

By using algorithmic analysis of blockchain data, we found that after the market downturn, the use of Tether purchases often occurred, resulting in a significant increase in bitcoin prices. This large-scale transaction accounted for less than 1% of Tether's total trading time, but it was related to a 50% increase in Bitcoin and a 64% increase in other major digital currencies.

Market manipulation challenges have also become a major obstacle for Bitcoin ETFs to be approved in the US. In November last year, US Securities and Exchange Commission (SEC) Chairman Jay Clayton said that before the market manipulation concerns were resolved, the digital currency ETF could not obtain Approved.

He mentioned at the time, "The retail investors should see the price that is trustworthy and unmanageable, not that there is no volatility, but that it is free of manipulation."

According to media incomplete statistics, in the four months to November last year, the SEC has rejected more than 10 Bitcoin ETF listing applications from six institutions. The reason for the refusal is that the application does not comply with the provisions of 6(b)(5) of the US Securities and Exchange Act, especially its lack of corresponding market manipulation and fraud prevention mechanisms. In addition, the SEC believes that the applicant has not submitted sufficient evidence to prove that the Bitcoin futures market has a "significant scale."