The Stellar Development Foundation (SDF), a non-profit organization that supports the development of the stellar blockchain network, has proposed to ban inflation mechanisms in its agreements.

The foundation announced the proposal on Monday, saying it was a "good idea" because the inflation mechanism did not benefit stellar-based projects. In the inflation mechanism of the network, the new XLM is added to the network at a rate of 1% per year. Each week, the agreement distributes these tokens to a specific account, provided that an account receives more than 0.05% of votes from other accounts on the network, and the account balance for voting is at least 100 XLM.

The Foundation has deployed this improvement in the latest version of the software, but still requires a large scale vote of the verifier. The upgrade time is tentatively scheduled for Monday (October 28, UTC time 16:00).

The following are the details of this proposal issued by SDF:

Since the first "release of the stellar agreement inflation mechanism" was proposed in October 2018, there has been a lot of discussion on this idea. Both the offline event and the open debate on the forum, as well as the in-depth discussion of the Stellar developer group, mentioned the proposal.

After listening to everyone's opinions and weighing the pros and cons, SDF (Star Development Foundation) asked the verifier to consider this issue: We believe it is a good idea to disable the current inflation mechanism.

We have deployed an improvement in the 12th edition of Stellar Core, and we encourage certifiers to vote and accept this improvement. We will explain the specific method of operation below, but first, we want to explain why we think this is the right step. If these ideas sound familiar, it's because this is what we learned from the stellar community.

Why should we eliminate the existing inflation mechanism?

1. Inflation does not bring any advantages to stellar-based projects

In conceiving the stellar project, we envisioned an incentive mechanism for account holders to collectively direct inflation-producing stars (XLM) to star-based projects. The idea at the time was that these XLMs would support the development and growth of the ecosystem, which is why inflation exists as a vote, which is why you can set the price of inflation to any star address, which is why you need a certain number of votes to get it. Inflation.

Millions of accounts have been generated over the past five years, and it is clear that inflation has not met the expected goals. Most of the users involved are not trying to give inflationary output to a star-based project, but to gain personal gain. Every week, the agreement generates a new XLM; every week, most XLMs go to individual account holders or SDF accounts.

A small number of stellar ecological projects have received enough votes to meet inflationary conditions, but the good people who voted for these projects actually chose to withdraw from the inflation pool. They choose to donate. We are very supportive, but it does not make sense to add the option of donation to the agreement itself.

The growing proportion of inflation among individual account holders means that this mechanism does not actually achieve the desired economic goals. Account balances grow in tandem with the supply of XLM. Imagine that when you wake up, your bank account suddenly has twice as much money as the original, but you find that everyone else is the same, so the price will be twice as much. Nothing will change.

2. Inflation will lead to scalability problems in the future

To develop this network, we need to maximize efficiency, throughput, and scalability. At present, inflation pool payment has little impact on operations, but as the star grows and the number of accounts increases, it will be a burden. The more the network grows, the bigger the problem becomes.

Eliminate existing inflation mechanisms, what advice do we have?

Recently, OrbitLens of stellar.expert submitted an improvement to our Github codebase, outlining a plan to abolish inflation. This improvement is actually very simple: we just modified the inflation operation to make it impossible to do anything. Instead, it will return an opNOT_SUPPORTED result code. You may also find the clues of this mechanism, but it will not have any effect. For example, you can still set an inflation target for your account, but it won't have any effect. Fees will still enter the expense pool and they will be locked there and cannot be accessed and used.

Since the technical operation is not particularly complicated, and the ban on inflation is actually a very important issue, we decided to get to the point, deploy this improvement in the core version, and call the certifier to vote.

We know that we cannot make decisions unilaterally; this is just what we think is the best. The stellar verifier can vote on the version of the protocol running on the network, so it is up to them to decide whether to accept the version without inflation. After the introduction of version 12, we need to give everyone time to prepare for the upgrade, so we will follow the normal schedule, make the necessary changes with the relevant organizations, and deploy to the test network to check the stability. This takes about a month.

During this month, we recommend that the certifier be prepared to upgrade the node and set the upgrade time to Monday (October 28, UTC time 16:00). At the time of the upgrade, we will gather on the #validators channel on Keybase and wait for the results to see if they decide to upgrade the network. The network will continue to operate regardless of the outcome of the vote.

Disabling inflation is a protocol-level change. This requires an upgrade of the entire network to take effect, and the upgrade of the entire network requires time, planning, and coordination. Stellar core developers must write, review, and test code. The SDK maintainer must handle the pending improvements and prepare the necessary software updates. Star-based apps, exchanges, and businesses must ensure that the versions they deploy are up-to-date so they can take advantage of new features and avoid disruptions.

In order to prepare the entire ecosystem for sufficient time, we have scheduled a network upgrade in advance. After October, the next upgrade will wait until January next year. As we said at the beginning of the article, the discussion about inflation has been going on for about a year. We hope that the verifier will vote on this issue now, instead of waiting until next year. Regardless of the outcome, we can move on.

2. What if the vote does not pass?

If the network decides not to accept this protocol upgrade, the following will happen: We will create a new version identical to version 12, minus the ban on inflation, called version 13 and submit it for voting. We will install the 13th edition for everyone, so the next network upgrade vote will not happen in a few weeks, but the agreement will continue to move forward without any impact.

Other important improvements have been introduced in the 12th edition of the agreement, and we are committed to ensuring that these improvements are applied so that people can continue to build bigger and better systems on the stars.

3. What about projects that require inflation support?

The mission of SDF is to develop and support the network, so we will provide education and technical assistance for stellar-based projects. We also offer XLM bonuses.

In addition to research bonuses and the Star Community Fund, we provide quarterly funding for projects that build and maintain infrastructure that are critical to the prosperity of the ecosystem. These projects are the reason for the initial inflation mechanism.

4. What will happen to the inflation output that SDF has already received?

We know that this is a problem for many people in the community. We also have a deeper understanding of the need to improve the transparency of past, present and future XLM distributions. “Defining the SLM's XLM Hold and Distribution Plan” is already stated in our roadmap. We are considering several options for how to handle the XLM of inflation output, and the final decision will be announced in the future.

The Shenzhen Stock Exchange issues a letter of concern to Jingu, asking for explanation of a number of cooperation projects involving hotspots such as blockchain 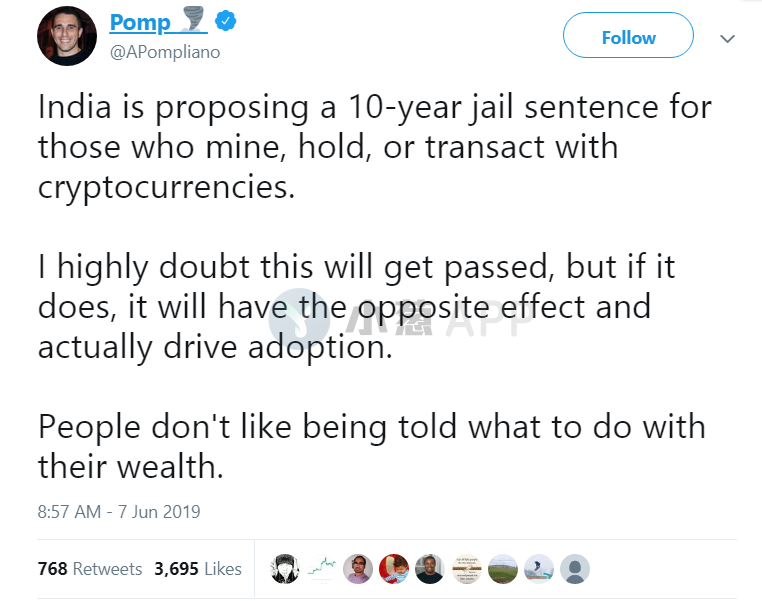 India's BTC premium exceeds $800, and strong regulation has led to a surge in demand

Opinion: The development of industrial Internet will feed back technological innovations such as blockchain

Analyst: The RSI index shows that BTC may usher in another large-scale callback