The British guy received the Queen’s “help letter” for 2.5 million bitcoins. This wave of fraud is no one…

One thing that happened recently was that Paul Ridden was a little bit dumbfounded.
Paul Ridden is the CEO of the UK technology company Smarttask, which is responsible for developing cloud-based OA products and providing related services.

How to say it is also the CEO of a technology company, and various high-tech Internet fraud methods have not been seen. However, the fraudulent "letter" received this time really made him a little off guard.

Received a letter of help from the "Queen's Secretary"

The one that Paul Ridden received was a paper letter sent by real mail. And this letter is used for phishing scams.

According to the letter, the scammer was issued as the private secretary of Queen Elizabeth II. The "royal" in the letter intends to borrow 450,000 to 2 million pounds (about 550,000 to 2.5 million US dollars) to British citizens, requiring the recipient to remit money through Bitcoin.

Especially the CEO of the technology company Paul Ridden, who has seen the big scene, is also in a messy situation – paper letter + bitcoin fraud, what is this combination? ?

On September 24th, Paul Ridden posted a picture of the letter on LinkedIn. 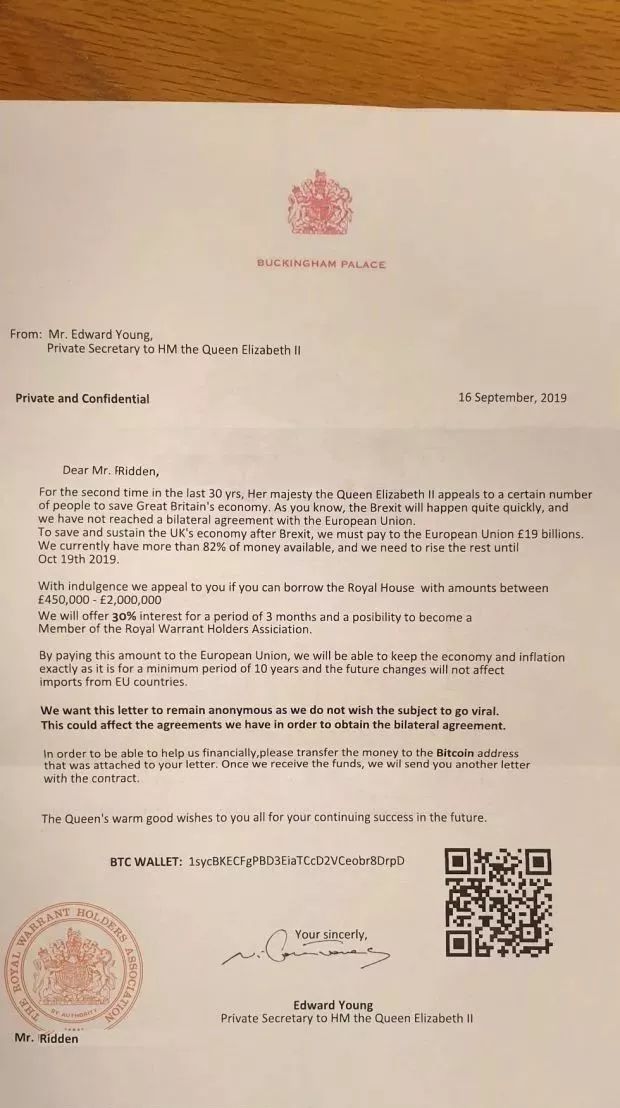 The letter was issued on September 16 and stated that the " Queen " is prepared to use the cryptocurrency to maintain the UK's economic stability after the Brexit.

The letter also used the real queen to do "endorsement": "This is not the first time the Queen of England has called on the British public to save the economy. This is the second time in 30 years that 'a hope for a certain number of people to save the British economy' Call. "In order to save and sustain our economy after the Brexit, we must pay the EU £19 billion."
Yes, this is still a "crowdfunding letter."
"Although the Queen has raised 82% of the funds, she still appeals to everyone to raise the remaining money together by October 19," the letter wrote.
Just ask for money? No, the "Queen" is not a party, how can the "people" suffer?

It is required to pay in bitcoin, and promises to pay a high return to the "royal family" to borrow money from the masses. Of course, it will not "fairly" everyone. In exchange, the letter stated that it would offer potential Bitcoin donors a 30% interest rate for three months and an opportunity to become a member of the Royal Warrant Holders Association…

Therefore, the "Queen" not only borrowed from the public, but also did not charge the pound, designated bitcoin, and the royal family members. (The Queen listened to the swearing).

At the end of the letter, a bitcoin wallet address is of course attached. Liar OS: Is the logic very smooth? 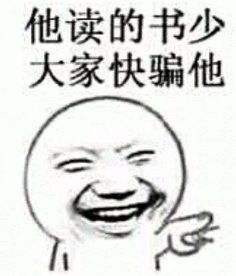 Paul Ridden was happy when he received the letter: "No wonder I always feel that the Queen will ask me for help in order to save the country one day in an emergency.

"Internet scams don't usually appear on paper. What makes me laugh is how poor the UK is… I have to borrow money from the masses?" Paul Ridden laughed. > Paul Ridden's content on LinkedIn " But it has to be said that this is another form of fraud. " Paul Ridden believes that this is a different kind of attempt, we have been trying to prevent and prevent all kinds of new cyber fraud, but if the scam returns to very original It’s a terrible thing to come to us.

However, even if the beating is creating a new type of fraud, the author’s written expression level is so bad that it…

"As a technology company, we know what is happening and protect the company's property. In addition, the letter is very poor in English, so no one will send bitcoin to them. " Paul Ridden said.

More interestingly, before listing the Bitcoin wallet address, the author of the letter asked the addressee to keep the wallet address confidential and not to send it to others because the address would spread like a virus, "may affect our agreement to reach a bilateral agreement." .

However, since Ridden's post attracted thousands of interactions in just a few days, the letter eventually became a semi-viral spread on LinkedIn. Some comments indicate: This is the most interesting and impossible scam I have ever seen. Thank you for sharing, laughing off my socks.
After the news was released, the British technology media contacted the Buckingham Palace Press Office, but Buckingham Palace declined to comment.
“This is an interesting shift in phishing attempts by mail,” said Javvad Malik, IT Pro’s KnowBe4 security awareness advocate. “From an conscious point of view, this scam has all the same features of email phishing. But this letter has some grammatical errors and inconsistencies. In addition, the email tries to instill a sense of urgency and promises to provide high Reward for the purpose of fishing. "

User comment: "My suspicion is first caused by bad spelling and grammar, but the seal does indicate that it is fake."

“People should be aware that scammers use all means to swindle money. Especially in the event of a major event such as a natural disaster, a sporting event or a political event such as the Brexit, they will squander and try to use it as much as possible. ” Javvad Malik said.

Is “innovation” in “retro” one of the laws of the development of all things? What do you want to say about this new type of fraud? Welcome comments and discuss with us!