A war of words of "true and false Nakamoto" continued to ferment.

Ao Bencong, a name with a little joke, is the general perception of Dr Craig S Wright (hereafter referred to as CSW ) by many people in the industry.

Since 2016 , CSW has been promoting itself as the creator of Bitcoin, Nakamoto, and said that it can be self-certified. But then the development of the story, everyone has long been familiar: most of the so-called evidence provided by CSW is untenable, or can not prove the identity of Nakamoto.

Afterwards, CSW “reluctantly” insisted that he was Nakamoto, and he even threw some evidence, but he was either falsified or unverifiable. Liars seem to be the most obvious label for CSW .

This time, the war of words began with the reluctance of CSW .

Two months ago, CSW published an article on "I am Nakamoto" on social media, and once again high-profile claims that he is "Zhong Bencong".

Hodlonaut angered CSW with sarcasm. He threatened to initiate a lawsuit against Hodlonaut and asked Hodlonaut to revoke the relevant remarks and apologize to him, and would reward the $ 500 valued BSV for the true identity of Hodlonaut .

Hodlonaut was forced to write off his social media account, but CSW became a target. The Bitcoin community not only launched " WeAreHodlonaut ", "Resist Okinaka ", "Under BSV ", but also changed the avatar to the Twitter avatar before Hodlonaut . At the same time, the encryption community announced that it will raise $ 20,000 to provide legal assistance to Hodlonaut to support Hodlonaut .

On Friday, Zhao Changpeng, the currency exchange, forwarded Hodlonaut’s alleged tweet and said: “ CSW is not Nakamoto. If we do this kind of shit, we will get off the shelf (BSV) .”

This threatening statement did not stop CSW from "maintaining identity." CSW has sent a letter of lawsuit to other people who say they are not Nakamoto, including Peter McCormack , the host of the " What Bitcoin Did " show in the UK.

On the evening of April 14 , Zhao Changpeng expressed his full support for Peter on Twitter and reiterated his point of view: CSW is a liar. At the same time, Zhao Changpeng also said that he is not willing to choose the side station in technology, intervene too much in the market, and is more willing to let market forces decide.

But on the second day of Zhao Changpeng's publication, on April 15 , the official announcement of the currency security official said that it will remove all BSV transactions on April 22 . Zhao Changpeng then forwarded the announcement and said: "Do the right thing."

Shortly after the announcement of the BSV , the ShapeShift Exchange also announced the removal of the BSV and stated that it would be completed within 48 hours. At the same time, the Kraken exchange has decided to get rid of the BSV through user voting, and currently has 73% support, or will consider the BSV . The CoinBase exchange was also exposed to modify the BSV 's confirmation time, making the BSV transaction completion time close to 7 days. The move is also considered to be that CoinBase is expelling BSV in disguise.

3. Is it dictatorship or sentimental?

The industry is hotly debated about the downside of the BSV and its subsequent events.

Lawyer Liu Wei, a supporter of BSV , said on Weibo that “there are several or all of them removed from the shelves, which have no effect on the construction of BSV ”. 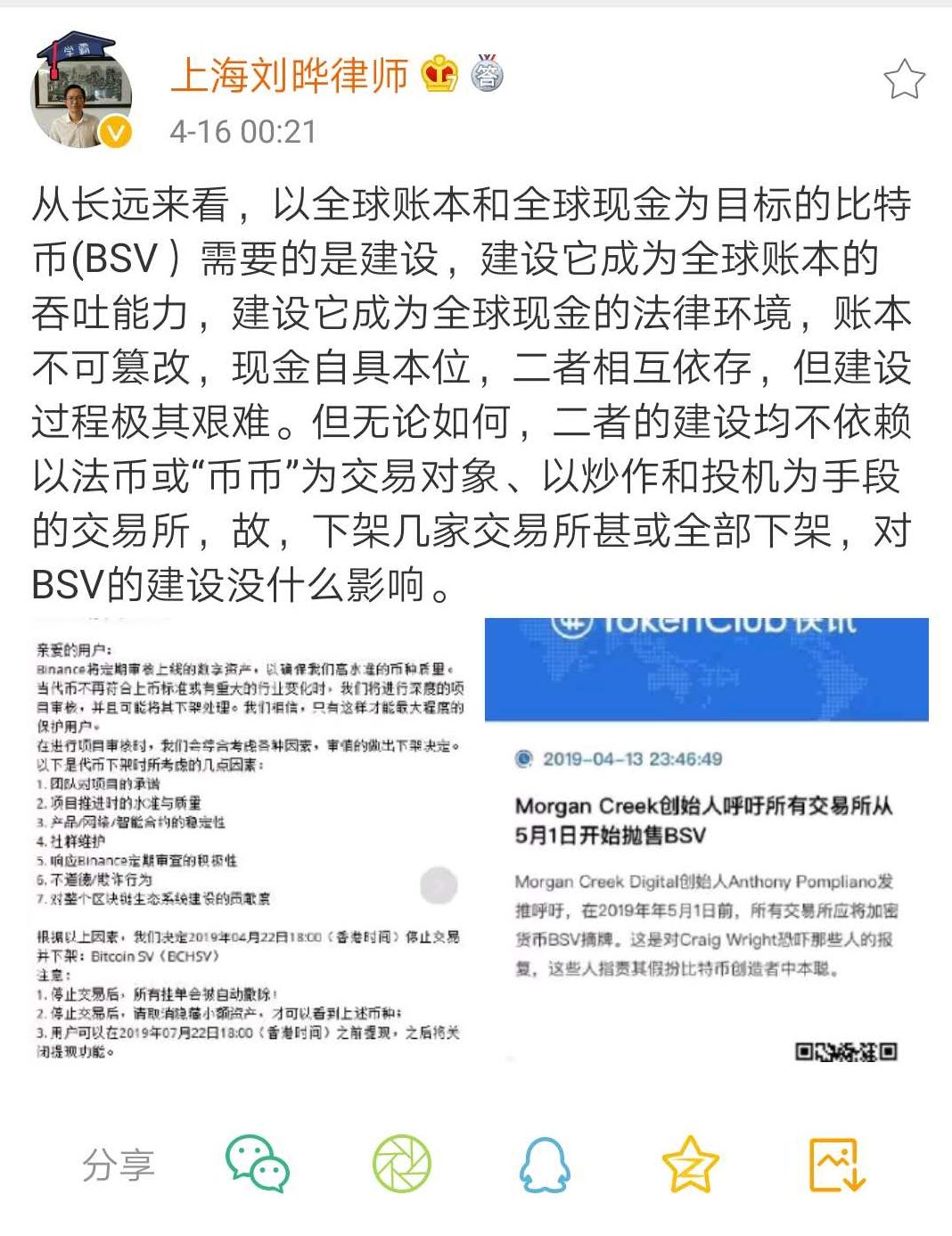 The BSV community did not take it for granted, and even said, “Thank you for the currency, let the real bitcoin out of the entire turbid currency.” 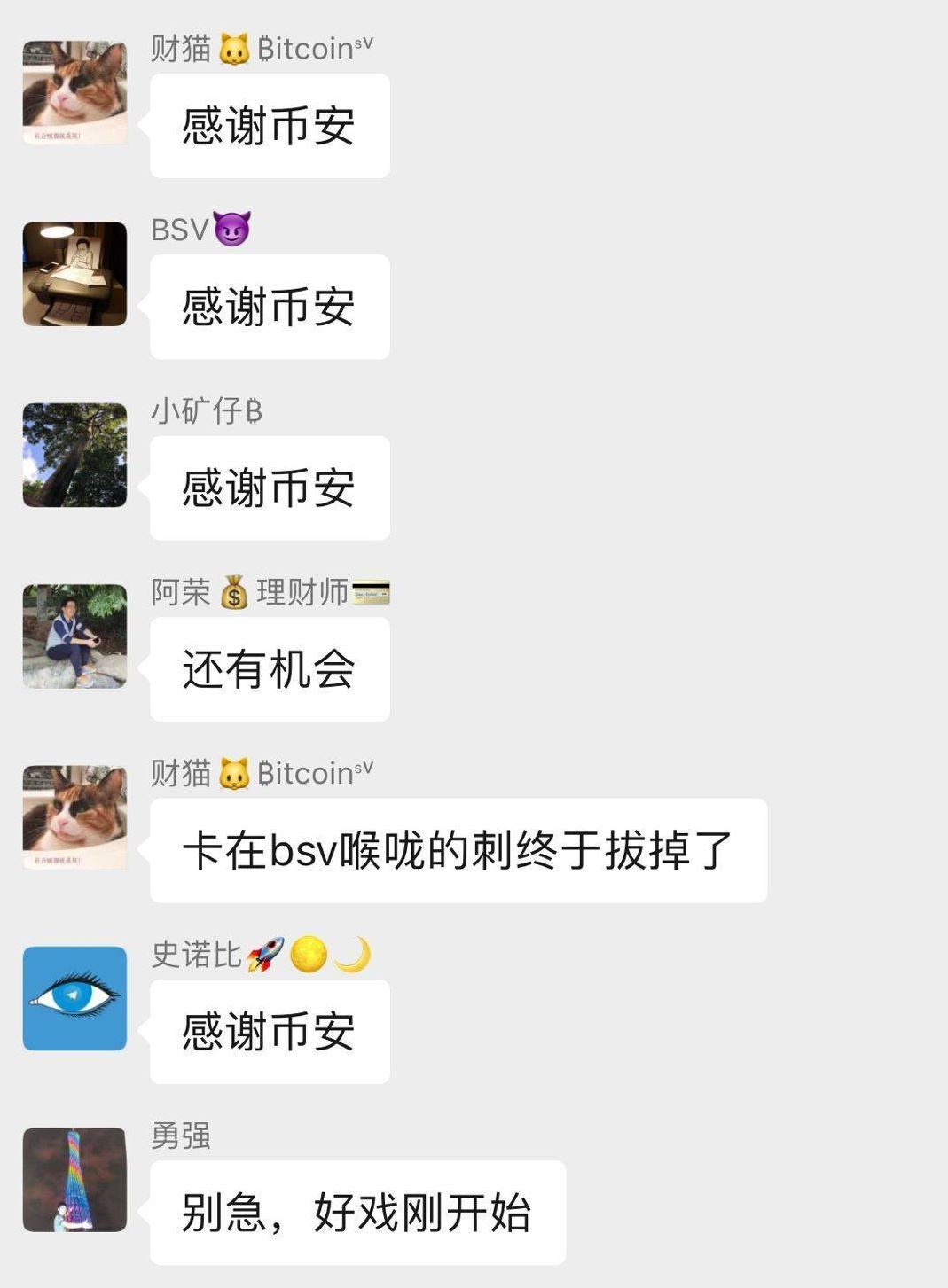 In this regard, Liu Chang, a Ph.D. in economics at Peking University and the founder of Zhimi University, believes that in this dispute, CSW “has a bone and has faith” and “has provoked cz off the shelf, so there is a bone; This is faith. But lack of reason and wisdom, this is their fatal wound."

He said that the main reason for the withdrawal of the BSV from the currency is the dissatisfaction with the adverse effects of CSW and BSV in the field of cryptocurrency. From the whole level, Zhao Changpeng is also a sentimental person. Unfortunately, he has a prejudice against BCH and fails to understand that "decentralization" essentially requires "bifurcation".

In Liu Chang's use, as the largest exchange of BSV transactions, the bank's BSV will have a continuous impact on the BSV , which will reduce the transaction depth and scale of the BSV , combined with the arrogant attitude of the BSV . Will make the BSV community further closed.

According to CoinMarketCap data, as of April 16th , the currency security is still the largest exchange of BSV transactions. The two major transactions accounted for 12.81% of the total transaction volume of BSV for BSV/USDT and BSV/BTC , and the turnover of 24 hours reached 40 million. Dollar.

Zhao Changpeng and Qian’an’s move can be said to be “killing one thousand and losing one hundred”, which means that Zhao Changpeng is a person with “sentimental feelings”. After all, the removal of the BSV means a large transaction fee, and the reason is simply because it can't stand the behavior of the CSW .

This is Zhao Changpeng's "feelings", but it is also his hegemony and dictatorship.

Zhao Changpeng’s battle with CSW on social media was originally a disagreement between two individuals. CSW, no matter how screaming, is only a personal act and cannot represent the wishes of the entire BSV community. After all, BSV is not a BSV for CSW alone. Although the BSV is dominated by CSW , today, the entire BSV community has more than 17 million currency holding addresses.

However, the currency security was suddenly dismissed because of the private position and mood of the founder, completely disregarding the interests of investors. From a certain point of view, this is a kind of performance of “military display” through the currency with the top market value, and it can be seen that the exchange has a strong position in the entire industrial chain .

As the helm of the currency security, Zhao Changpeng handled this matter in a nearly dictatorial way, not rational enough, and even somewhat "arrogant."

Zhao Dong, the founder of DGroup , also expressed a similar point of view. "I don't think the BSV under the exchange is correct . It's not that I support BSV . Is CSW a liar and a fake Nakamoto? Is it the first day that everyone discovered it? Since it was on the shelves Now, I have earned enough transaction fees. Now I have abandoned people and let those who bought the BSV quilt cover?"

Bao Erye Guo Hongcai said in a circle of friends, "We hope that the currency can exceed the Nasdaq, but it needs to be retired, not the Yelang arrogance."

Compared to the currency, the choice of Kraken and the fire currency is more sensible.

Although Kraken is currently considering the BSV , this consideration is not made by the founder's head, but by a user vote. This represents the user's thinking, even if the BSV is not subject to investors' doubts.

Weng Xiaoqi, CEO of the Firecoin Global Station, said that the fire currency encourages the act of fighting evildoing, but the exchange itself should not decide the issue of the currency due to the likes and dislikes of the manager. Fire coins will focus on user feedback and may ultimately hand over the decision to the user.

The currency is safe, and it can be more gentle and smoother to the "public opinion" underground shelf BSV . Only Zhao Changpeng and Qian’an did not choose this way.

Of course, the impact of the currency security BSV is far less than that currently rendered. The currency security BSV , at most, lost a currency fee, but it also got the favor of the "anti- CSW " camp, perhaps bringing more new users; and BSV is currently online at more than 80 exchanges around the world. Even if it is removed from several exchanges such as the currency, it will affect the depth and scale of the transaction, but it will not shake the foundation of the BSV .

In this case, why is there such a big movement? So that almost all of the industry's KOL have expressed their views? Zero Financial Finance · Binary believes that the main reason is that the public opinion battle between the two individuals has suddenly risen to the market dispute between the two subjects, leaving many people unprepared .

The battle between CSW and Zhao Changpeng is at best a paradox argument. It makes sense to eat the melons and see the excitement. However , the move of the currency to the BSV has raised this paradox directly to the public opinion. Market behavior has affected the direct interests of many investors .

Under the currency, before the major exchanges have precedents, the reason is nothing but technology is not enough, the team is not reliable, the volume is insufficient. But this time, the currency support for the founder to support Hodlonaut to choose the next BSV , but let a large number of investors holding BSV suffer losses, it is inevitable too casual.

In particular, Zhao Changpeng, on the previous day, also said on the social media that “I don’t want to be too technically selected to stand on the sidelines, let the market decide everything.” Turning over the currency, Ann has announced the removal of the BSV without asking for the opinions of the users.

Is this contradiction a feeling or an dictatorship?

Huawei Zhang Xiaojun: The commercial layout of the blockchain requires interconnectivity, and the blockchain is the glue that connects various technologies

Today’s panic and greed index is 69, and greed has increased