What is the blockchain of sea cucumber farmers?

The Odaily Planet Daily found that in the “Network Letter Office” filing list, the competition cloud of Chenxin Technology (stock code: 002447) is also being filed.

Before 2016, the main business of Chenxin Technology was the cultivation, processing and sales of sea treasures such as sea cucumber. The sales of sea cucumbers of the company far exceeded that of Zizi Island, Dongfang Ocean and Haodang equivalent. At that time, it was called “the sea cucumber king” by the market. .

However, Chenxin Technology has been obsessed with the transformation of the game industry. Under the condition that the asset restructuring of the game industry is strictly monitored by the regulatory authorities, the trading method of using sea cucumber assets for the equity of game companies has been designed. Finally, in 2016, the game company Yan Xin Interconnect 55 % of the equity in the pocket, and with the Swift Chain (playing coins) and Lenovo Lecoo "dig gold treasure" this wave of "route mining", launched the blockchain e-sports acceleration router "competition cloud" . Completed the first step in the transformation of a sea cucumber farmer into the game industry.

According to Chenxin Technology, users can contribute their power to “mining” through the competition cloud router to obtain a score called “GCP”. Chenxin Technology provides a name called “Bingying” in the competition cloud platform. The block BATT (now renamed "PONY") is a blockchain-based digital currency exchange channel, and users can use the GCP score to redeem the BATT in a certain ratio. According to the official website, BattleWin is a set of global competitive entertainment blockchain intelligent contract platform. Based on blockchain technology, it uses smart contract service to manage all online sports competitions. Process.

As a "foreign currency" under the "blockchain + quiz" under the head of malnutrition, BATT originally hoped to cooperate with the "combat cloud", and it can be justified to land in China, so that it can be used as a fig leaf to cover up the blockchain technology. It opened the real intention of online casinos to pull people to gamble, and as a result, stealing chickens did not erode the rice, and inexplicably became the harvester of the listed company "curring cuts of leeks".

Chenxin Technology publicizes that BLINE provides a digital currency exchange channel based on blockchain in the battle cloud platform. Users can use GCP points to exchange BATT in a certain proportion. According to public information, the total number of BATTs is 5 billion, and the total amount is constant, and will never be issued.

According to public information, BATT can be traded on the AllCoin digital currency exchange. In this way, BATT is at best a tool for Chen Xin Technology to connect the virtual world's points with the real world currency by introducing digital currency, helping to realize the "financial management" function in its product promotion.

Perhaps because of the identity of his "foreign currency", it is difficult to convince the public. It is expected that the identity of the "competition cloud" A-share listed company can endorse BATT, which is convenient for itself to issue coins, speculate coins, and cut leeks. I did not expect to eventually become a listed company. The tool for "patterning leeks".

What role does BATT play in the ecological chain of Chenxin Technology? In the blockchain ecology created by Chenxin Technology and Jingdouyun, game users contribute their power to “mining” through the competition cloud router, and then obtain a score called “GCP”.

"GCP" acts as an interactive medium in the battle cloud game ecosystem and can be used to purchase game goods and services from the official, and to trade goods with other users. But just by sending points, it is difficult for users to be interested in this router with a price of up to 1888 yuan.

As a result, BATT became the “financial management” tool that Chen Xin Technology took for granted.

It can be said that "the birth is also Xiao He defeated Xiao He", precisely because it is bundled with the "competition cloud" in the name of strategic cooperation, although BATT has acquired users and applications, the two sides are too tightly tied, "combat cloud" miners source The constant selling pressure caused the BATT to approach zero after 41 days of logging in to the exchange. The investors who bought the position in the initial period have not returned.

For the outside world's accusation of Chen Xin Technology's "fancy cut leeks", Odaily Planet Daily telephoned the staff of Chenxin Technology to verify that the other party refused the response to the matter with the words "this matter is not under our control". At present, Odaily Planet Daily has not yet contacted the core person in charge of the competition cloud products, and will continue to follow Chen Xin Technology's response to this matter.

In addition, it is worth noting that on July 9, 2018, according to the Beijing Municipal Bureau of Quality and Technical Supervision, the Beijing (Hai) Quality Supervision Penalty [2018] No. 19 Administrative Punishment Decision Book, Yan Xin Internet (Beijing) Network Technology Co., Ltd. arbitrarily sold the competition cloud 2.0 products without 3C certification, and was fined 50,000 yuan by the Beijing Haidian District Quality and Technical Supervision Bureau in accordance with Article 67 of the Certification and Accreditation Regulations of the People's Republic of China. The administrative penalty of 18,492 yuan. 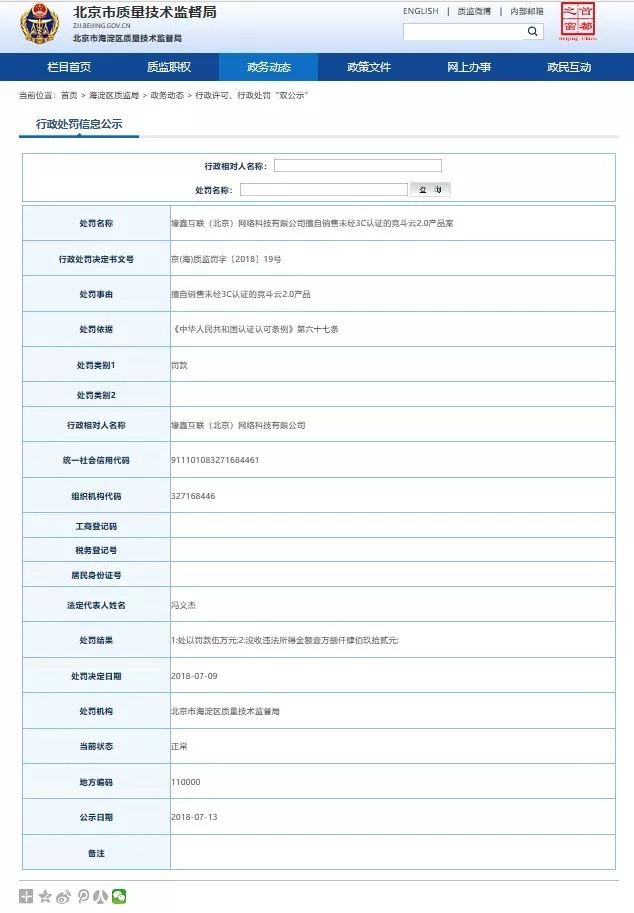 According to the Odaily Planet Daily, as early as February 2018, Chen Xin Technology once responded to investors’ questions on the panoramic network investor interactive platform, saying that because Xinxin’s products are still undergoing 3C certification required by the state, The time to complete the certification conflicts with the delivery time or may result in an extension of the shipment.

The former helm was suspected of manipulating the securities market

In fact, in addition to the competition cloud "fancy cut leeks" has attracted a lot of investors' "attention", Chen Xin Technology's shareholding changes and the former helm Liu Dequn has also been concerned by the outside world.

According to the daily economic news reported in March 2018, on the morning of March 13, 2018, Chen Xin Technology issued an announcement (link) that Liu Dequn, Liu Xiaoqing and others were criminally detained by Changzhou police for alleged manipulation of the securities market and insider trading. On the evening of the 14th, Chen Xin Technology said that up to now, Liu Dequn holds a total of 25.28% of the company's shares, Liu Xiaoqing holds a total of 6.98% of the company's shares, and the total of about 460 million shares of the two have been frozen.

The report said that Liu Xiaoqing and his father were suspected of insider trading and did not know whether it was related to the previous cash.

Since 2015, Liu Dequn has begun to reduce its holdings. According to incomplete statistics, in 2015 and 2016, Liu Dequn reduced its holdings by 140 times in the secondary market, and reduced a total of 140 million shares, a total of 1.496 billion yuan.

In November and December 2016, Liu Xiaoqing, who was just the chairman of Yanqiao Co., also reduced his holdings four times, reducing the total holdings of 22.14 million shares and cashing in 204 million yuan. As a result, the father and the daughter have totaled about 1.7 billion yuan in two years.

According to the report, with the listing of Yanqiao Sea Cucumber, Liu Dequn and Liu Xiaoqing ranked No. 306 in the Forbes China Rich List in 2010 with a total of 3.55 billion yuan.

Liu Dequn is the former chairman of Yanqiao Sea Cucumber. On October 10, 2016, Liu Dequn resigned from the position of chairman and general manager of the company. Subsequently, 29-year-old Liu Xiaoqing took over the chairmanship.

On March 12, 2018, Feng Wenjie, Chairman of Xinxin Internet, served as Chairman of Chenxin Technology and Liu Xiaoqing stepped down.

Chenxin Technology has a deep relationship with Yuxin Internet. In the second half of 2016, Yanqiao Sea Cucumber replaced some of its assets with a price of 990 million yuan and 55% of Yanxin Internet. After that, it formed a dual main business model of sea treasure breeding, breeding, processing, sales and mobile game distribution and operation.

Shanghai Yucheng paid the consideration for the transfer of shares by Liu Dequn in the form of debts to Industrial Securities and Xue Chengbiao.

In addition, the company changed its name four times in seven years, which also caused concern.

"31-year-old female wealthy businessman Liu Xiaoqing was arrested! She and her father used this method to slash 1.7 billion in two years.

"Chen Xin Technology's performance behind the counterattack: on the verge of breaking the law, "muffled and made a fortune"