With the rapid development of digital technology, the human society has moved from the traditional industrial era driven by capitalism to the information age. In this process, the global platform economy has risen strongly.

According to China Information and Communication Institute, the platform model has become an important organization for enterprise production and operation. Before 2009, the top 10 global market capitalization companies were only Microsoft platform companies. By 2017, this number had risen to 7 and the number of traditional enterprises was overtaken. Among them, Apple in 2009, Google in 2013, Amazon and Facebook in 2015, Alibaba and Tencent entered the global market value Top10 list in 2017. Statistics show that in 2018, the proportion of market capitalization of platform companies in Top10 listed companies in the world has increased from 8.2% in 2008 to 77%, and the scale has reached 4.08 trillion US dollars, which is 22.5 times larger than that in 2008, becoming the new engine of global economic growth. 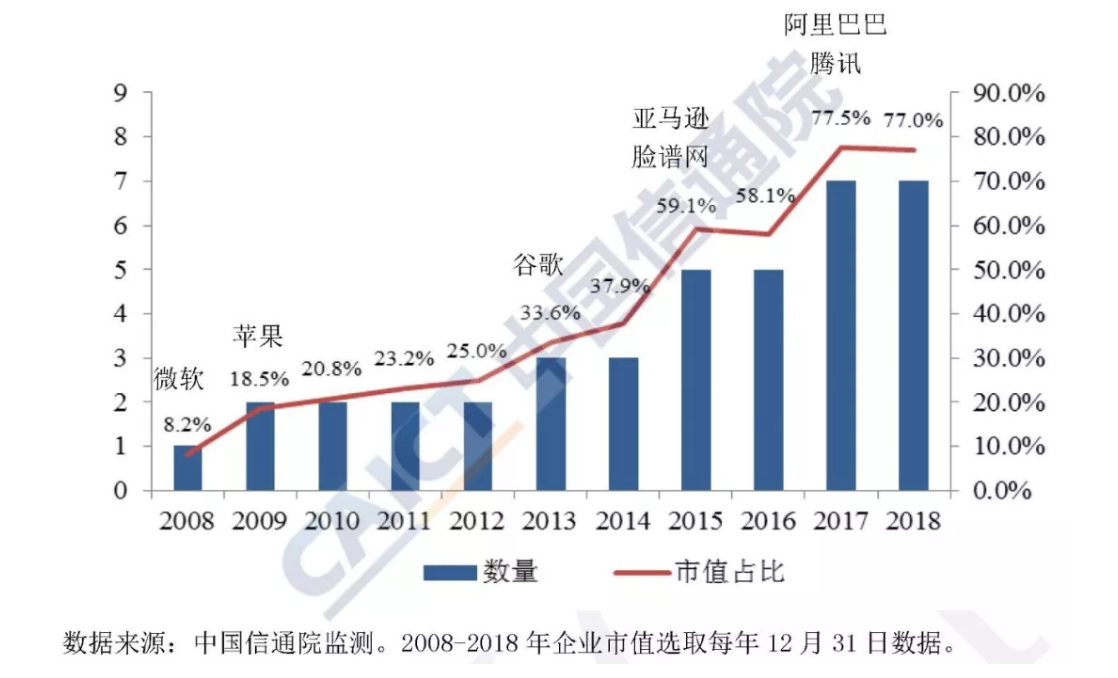 Therefore, regardless of the scale, number and growth rate of the platform, the global Internet platform economy is booming, and the rise of the platform economy has already taken shape. As far as China is concerned, after more than 60 years of industrial economic development, in the initial stage of entering the digital economy era, the new economic development pays more attention to the leading role of new technologies, new ideas and new models in social economic growth and social progress.

A new round of "platform economic boom" has already hit, however, there have been some problems in the development process that need to be managed. For example, the contradiction between the profit model of the platform economy and the privacy of user data, the construction of the user credit system, and the centralized monopoly of the platform operators.

Blockchain technology as a "trust machine" can bring a new application explosion point in the platform economy.

First, what is the platform economy?

Big data, cloud computing, the Internet of Things, blockchain, artificial intelligence… The digital economy has also brought the vocabulary of this new series of technology cores, as a new business form, many people Did not understand the meaning of the platform economy. 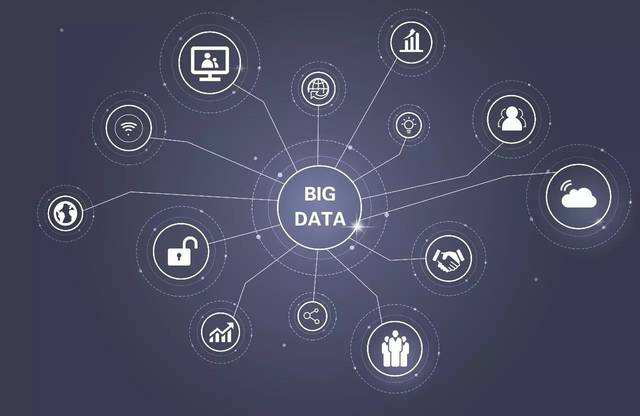 Dr. Meng Meng, an expert at China’s ICT, believes that platform economy refers to a virtual or real trading place. The platform itself does not produce products, but it can promote transactions between two parties or multiple parties, and charge the right fees or earn the difference. A business model of income. Popular understanding, the platform economy is a big market, everyone comes to the market to trade, the market charges booth fees or transaction fees or protection fees, so that everyone can freely trade in the market.

It can be said that based on the network infrastructure such as cloud, network and terminal, the platform economy is driven by technological innovation and business model innovation, and is a new economic model formed through resource sharing, industrial integration and business innovation. 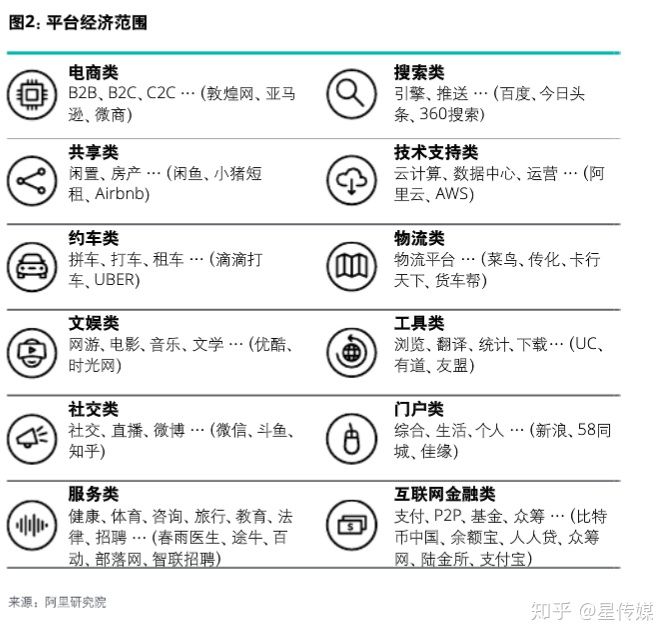 As more and more traditional enterprises carry out digital transformation, the future platform economy will extend to more areas and accelerate the penetration of the traditional economy. The integration of online and offline will become an inevitable trend.

So, what kind of new features does the platform economy show in comparison with the business form of the traditional industry?

The traditional industrial economy takes the development of industrial manufacturing as the core, with labor, natural resources and capital as the basic elements, focuses on B2C, takes the manufacturer as the center, pursues economies of scale, and relies on expanding the scale of production and the optimal allocation and utilization of resources to realize resource supply. Product production and sales growth. The platform economy was born in the context of informationization and globalization. With information technology, knowledge and network as production factors, manufacturing focuses on B2C, consumer-centered, relying on technology to pursue innovation benefits, and pursuing innovation speed and business philosophy. Flexibility, efforts to improve the technical content and leadership of the product.

The Ali Research Institute predicts that under the conditions of the corresponding supportive policy framework, the scale of China's platform economy will exceed 100 trillion in 2030. In the future, with the development of high-end chips, quantum chips, artificial intelligence, Internet of Things, industrial Internet, 5G, AR/VR, blockchain and other technologies, the platform economy will develop at a faster rate, deeper and broader impact. Infiltrate the economic society.

Second, how to empower the blockchain?

In the rapid development of the platform economy, although these platforms bring a lot of convenience to people's lives, and bring about the innovation of productivity and production methods, it is also inevitable.

First of all, the platform provides the infrastructure for the economic exchanges such as information exchange, demand matching, and capital goods delivery to connect various economic participants such as consumers and businesses. As a business entity, platform enterprises are profitable. However, the profit of the platform itself often conflicts and contradicts the interests of users.

For example, as the Baidu platform of China's first search engine, the platform charges a certain fee, and when the user searches for related products, the rankings of some businesses are displayed in the front. This actually violates the principle of fairness and justice. At the same time, paid ordering makes it easy for manufacturers to invest more limited funds into ranking promotion rather than improving the product itself. The real demand for consumers will also be misleading. effect.

What's more, the platform also faces the right to abuse user data and infringe on user privacy, such as Facebook's data privacy disclosure case in Europe this year.

China Information and Communication Research Institute Zeng Wenwen said that in the first three quarters of 2018, the total number of illegal online transactions in the country reached 17,000, a year-on-year increase of 39.2%. In 2018, the national market supervision department accepted a total of 1.682 million online shopping complaints, a year-on-year increase of 126.2%.

Judging from the problem of infringement and counterfeiting, in the past three years, the data on the number of online shopping counterfeit complaints and the unqualified detection rate of e-commerce products in China have not improved significantly, while the number of patent enforcement cases in China's e-commerce sector has shown a significant upward trend. It is 51% higher than 2016. Judging from the false propaganda problem, the number of false publicity complaints about online shopping in China increased by 60% in 2017 compared with 2016, and the proportion of total complaints also increased year by year.

All of this inevitably points to the same contradiction: the issue of trust.

Perfecting the social credit system, re-establishing the credit relationship between individuals and enterprises, and precipitating the credit data records of the main body is an important basis for the healthy and sustainable development of the platform economy. Under the increasingly monopolized operation of the centralized platform, the data Authenticity is increasingly dependent on the company's own credit, and once there is a little crisis, the user's trust in the platform enterprise will turn sharply.

The user enterprise of the platform and the platform itself obviously do not have the ability to have an equal dialogue. At the same time, because the enterprise users on the platform are too dispersed, it is difficult to establish a game alliance and platform for the game.

As a blockchain technology that trusts machines, it may bring new solutions to difficult platform problems.

The essence of the blockchain is the decentralized distributed database, which is formed by a series of data blocks generated by cryptographic methods. Each block contains a timestamp and records the generated time. Data information that cannot be tampered with.

The platform ecology in which multiple parties participate in the construction seems to naturally need this decentralized or multi-centered distributed ledger.

It is understood that in the era of big data, the traditional pyramid-type management organization form of the government is out of date. With the socialization and flattening of the society, the current management mode leads to the communication and coordination of information, which consumes a lot of time and decision-making costs. In the middle, hierarchical management hinders the communication costs between departments at all levels and reduces work efficiency.

Therefore, the pyramidal management organization needs to be transformed into a flat organizational form. The flattening of the organizational structure provides a platform for flat management. On this platform, blockchain technology can continuously optimize business processes and provide material carriers for flattening information.

In the establishment of a distributed peer-to-peer network among government departments, each participating entity has the right to read, book, and store data on the blockchain. Under the premise of not changing the existing e-government system, the inter-departmental department can use blockchain technology to directly carry out point-to-point information transmission without the need for layer-by-layer approval. The blockchain can also dynamically collect data from the administrative approval process to facilitate supervision.

At present, China's Haidian District, Hunan Loudi City, Qingdao, Xiong'an New District and other places are vigorously developing the application of blockchain technology in government affairs. Xiong'an New District also takes the lead in the development of blockchain, blockchain technology It began to be applied in project construction bidding, financial management, and house leasing, with the goal of establishing a clean, transparent and efficient government.

Although the blockchain's revolutionary impact on many economic sectors cannot be achieved, especially in the case of many comprehensive platform companies, for the moment, companies such as BAT have used blocks in the vertical platform of their specific industries. Chain technology. For example, in the application of blockchain technology in the e-commerce sector, in March 2017, Alibaba announced a partnership with PricewaterhouseCoopers to create a traceable cross-border merchandise supply chain covering producers, logistics and consumers. The all-node chain is an important measure in the field of “food safety”.

Therefore, although the platform economy of e-commerce cannot be completely changed, with the support of the big platform, blockchain technology can alleviate the risk of counterfeit or false information such as commodities and logistics to a certain extent.

sheknows live broadcast | Gao Hang: As a blockchain company, we must capture the direction of data high-speed rail construction