On October 10, according to the official news of Yang Dividend, the Chinese presidential candidate Andrew Yang (Yang Anze)'s campaign token, The Andrew Yang Coin, referred to as MATH, will be officially released, which means that MATH will become the first presidential campaign in history. Token. 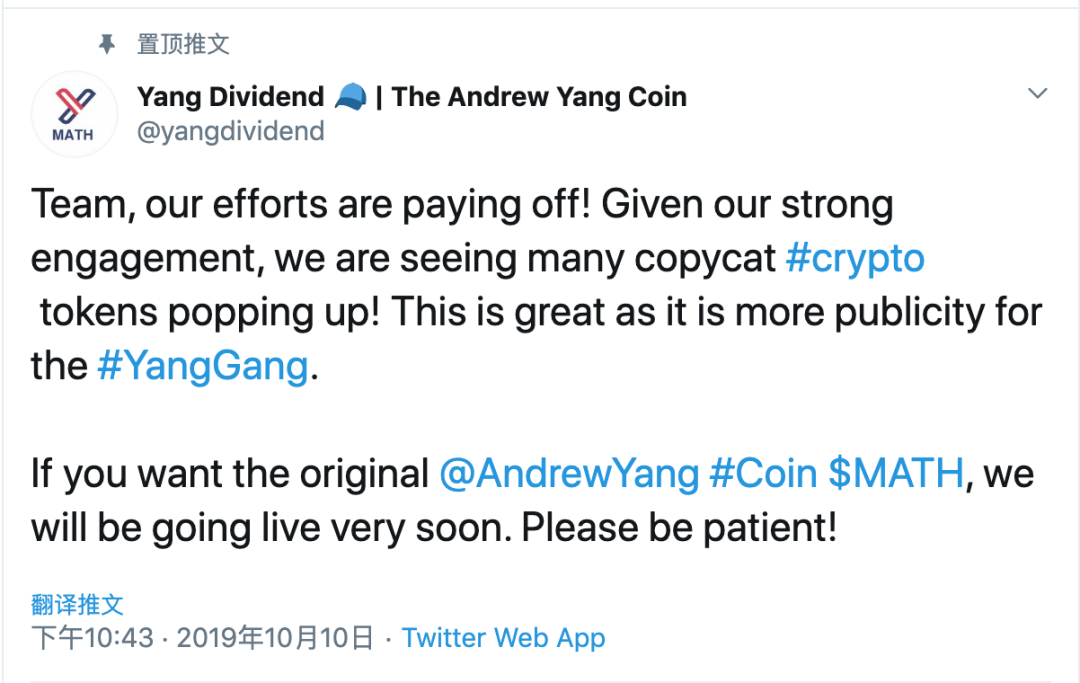 Yang Dividend is Yang Anze's support organization. The purpose of this organization is to promote Yang Anze's presidential campaign, and to bring as many new people as possible to the world of cryptocurrency.

It is understood that the organization began researching The Andrew Yang Coin in August 2019, and in September 2019 released a smart contract, according to the contract address, has now issued 3,141,592,653 MATH.

Why is the token name MATH (math)? This is Yang Anze's latest campaign slogan.

Whenever Yang Anze visits a campaign rally or speech site, hundreds of “Yang Bang” members will support the slogan “MATH”.

In the eyes of the Americans, Yang Anze frequently uses the mathematical stalk "MATH" is a perfect "self-black" – good at doing math problems, is a stereotype of other Americans for Asians, especially Chinese, the meaning is Chinese The image of the nerd, which is deeply rooted in the hearts of the people, has used the stalk of the Yang Anze team to let the voters see his self-deprecating and humorous side. About MATH, Yang Dividend lists seven features, such as the Token Project registered in Wyoming, the most crypto monetary policy; 100% distributed to Yang Anze's supporters, founders and teams are not retained; the distribution method is strictly in accordance with the white paper description , do not make any corrections and tampering…
1. MATH is the original token
MATH is the original token, with a clear goal of identifying Yang's supporters and acting as a “souvenir” to support Yang Anze's activities (as can be seen from the creation time and date of the token).
2. MATH is selfless
MATH will distribute 100% instead of being retained by founders and employees like other projects.
3. MATH encryption policy is friendly
The Yang Dividend project is registered in Wyoming, and Wyoming is the most friendly state in the United States for cryptocurrencies.
4. MATH is beneficial
Tokens can only be divided by two decimals, just like a free dividend.
5. MATH supports Yang as president
The success of Yang Anze’s presidential campaign will increase the number of MATH assigned to each holder… The longer he stays in the presidency, the longer Yang Dividend will be allocated.
6.MATH cannot be tampered with
MATH will only be distributed in the manner outlined in the white paper, and while other projects may change their eligibility and standards over time, Andrew Yang Coin has been working on fixed rates and distribution systems throughout its lifecycle.
7. Distribute MATH
Once the MATH distribution activity is over, all undistributed tokens will be destroyed, which, combined with the MATH grant method, produces a widely distributed token system.

In July 2018, Yang Anze issued a tweet to announce that he now accepts Bitcoin, Ethereum, and any donations based on ERC20 standard tokens to support the 2020 US presidential campaign.

In June 2019, Yang Anze issued a statement, congratulations @SatoshiLite (the account of Litecoin founder Li Qiwei) became such a pioneer, let us build the future; and accompanied by a photo with Li Qiwei. Yang Anze proposed a campaign slogan of people-oriented and free bonus. Yang Anze believes that scientific and technological progress is worth encouraging, but at the same time, it is necessary to pay attention to people's living environment, such as the natural environment and employment opportunities. To this end, he advocates the implementation of the free dividend policy, the specific measure is to unconditionally issue $1,000 per month to every US citizen aged 18 to 64.

At the same time, Yang Anze said that the payment of these wages is not limited to the US dollar, but can also be paid in the form of bitcoin.

When asked if he had considered using Bitcoin as the payment medium for the application of "the basic income of the whole people", Yang Anze's answer seems to be affirmative.

He also responded positively to Bitcoin's decomposability into Satoshi (Satoshi is the smallest part of Bitcoin currently available: 0.00000001 BTC), arguing that Satoshi, the smallest unit of measurement for Bitcoin, would make Bitcoin an ideal Payment options.

At the 2019 New York Consensus Conference, Yang Anze once again expressed his friendly position on cryptocurrencies when communicating with Neeraj Agrawal of the Coin Center, a think tank.

Yang Anze said that although he does not directly hold any kind of cryptocurrency, he has invested in an investment institution that holds cryptocurrency.

At the same time, Yang Anze also attacked the unfriendly law enforcement of cryptocurrencies by US regulators. In particular, the regulatory agencies launched law enforcement actions before issuing guidelines. This is very unfair. He said:

“To a certain extent, the regulator owes us and owes the entire community a clear explanation.”

Born in New York State in 1975, Yang Anze grew up in a typical Chinese intellectual immigrant family. Both parents are from Taiwan and are well educated.

Like many Chinese immigrant descendants, Yang Anze also inherits the “Xueba Gene”. The university studied at the Ivy League University of Brown. After obtaining a master's degree in economics and a degree in political science, Yang Anze entered the Columbia University School of Law and obtained. After graduating from law, he successfully became a corporate lawyer.

Since then, after several times of hopping, Yang Anze joined the GMAT training company founded by his friend Van der Hawker as CEO. In 2009, the company was acquired by the famous American education group Kaplan, and Yang Anze earned his first gold.

In 2011, Yang Anze started his business again and founded the non-profit organization Venture for America (for American entrepreneurship), which is dedicated to helping young people who are just starting out to socialize.

In the first year of the project, only 40 people were recruited, with a budget of 200,000 US dollars. By 2017, “starting for the United States” has an annual budget of 6 million US dollars, and the number of cities supporting entrepreneurship has increased to 14, except for big cities like Philadelphia and Miami. There are also small markets like Baltimore, Detroit and San Antonio.

Therefore, Yang Anze proposed the UBI (Basic Income for All) policy of “$1,000 per person per month” and proposed the campaign slogan “Humanity First”.

Everyone sends $1,000 a month? Yang Anze’s idea has been questioned by many people as “a fantasy, infatuation,” Yang Anze explained, because the automation of many key industries seriously threatens the people’s labor, so he will let the big companies use the value-added tax to smash the pen. Money, for example, Silicon Valley's tech giants, have taken too much benefit.

"I support Yang," Musk said, "He will become the first goth president in the United States. " 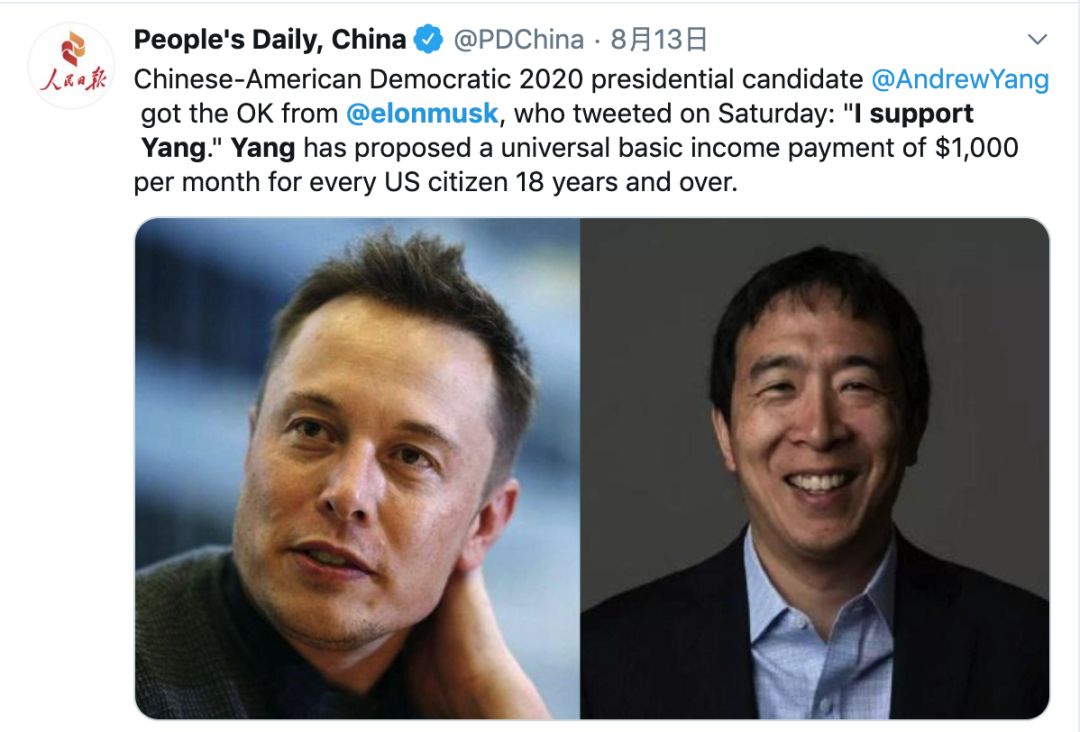 In March of this year, Yang Anze published his "non-mainstream" photos at the age of 17, and revealed that his favorite band was the British post-band band the Smiths and the Gothic band the Cure, so he was also ridiculed as "God President."

Chinese President, President of Mathematics, President of Encryption, President of Gothic… Yang Anze will never lack topics and labels. Whether MATH can help him win the 2020 election may be worth waiting for.

BB: Voice Token is designed to decentralize the economy of attention 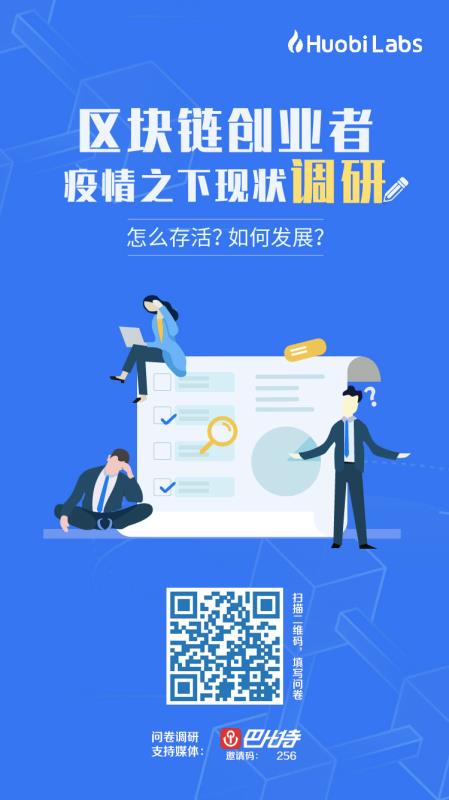 Bank of England Governor: DLT project has the potential to unlock billions of pounds of capital and liquidity