The Maker ecosystem has experienced explosive growth due to the rapid growth in compound usage and Coinbase Earn's CDP educational activities.

The following is a report of key indicators for Dai during the period from July 2019 to October 1919.

In the past four months, Dai's activity has more than quadrupled. In September, more than 66,000 addresses were sent or received by Dai. According to the Dai In Numbers report from the previous quarter, Dai's activity reached its highest record in May, which is 16,000 active addresses. In addition, an important adoption indicator “holding a number of addresses of Dai and above” is also growing steadily, with an average monthly compound growth rate of 27%. 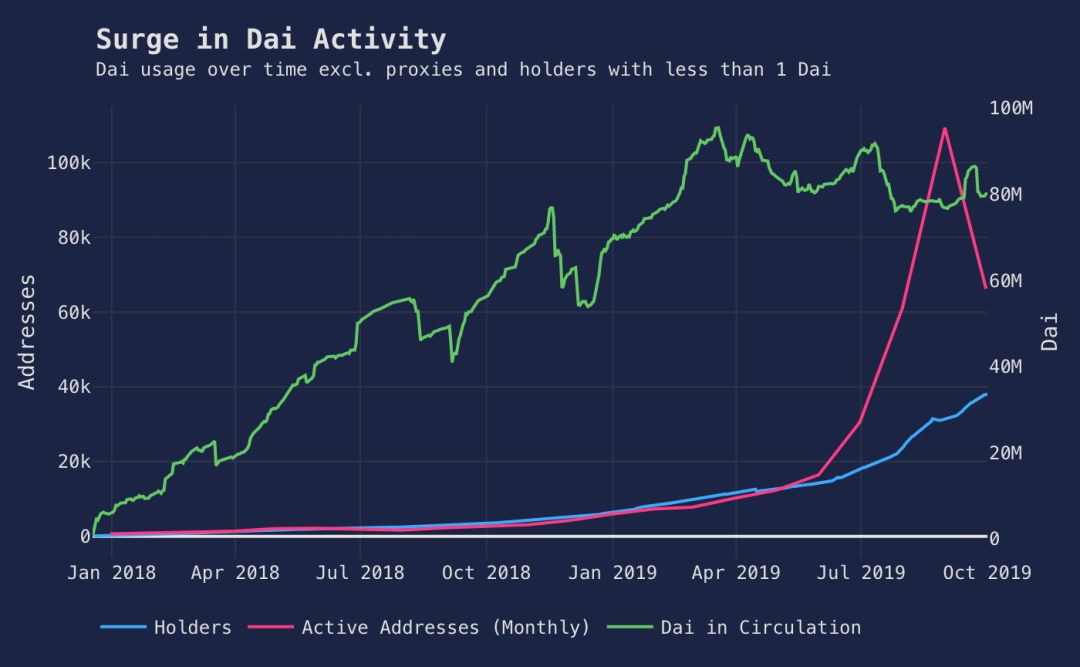 The chart above shows that the usage rate of Dai peaked in August, and the active address of Dai exceeded 100,000.

The peak came from the Dai education event launched by Coinbase Earn, including the principle of Dai and how to open CDP to generate Dai through the Maker protocol. From the smart contract data, Coinbase activities attracted at least 76,000 new users to the Maker agreement, and 43,000 in August alone.

Who is holding the Dai in circulation?

There are currently about 80 million Dais in circulation on the market. It is worth noting that the decentralized lending agreement Compound has almost 15% of Dai. Compound is a smart contract credit system that deposits Dai in circulation in the pool of funds, and users can deposit or lend cryptocurrencies from the pool of funds. At present, there are nearly 12 million Dais in the Compound pool, which is about 6 times that of June. Dai is the most cryptographic asset that is loaned on Compound.

Dai is used by more and more people to illustrate the importance and strong appeal of stable coins in the Ethereum ecosystem.

Just a week ago, the cryptocurrency market experienced significant fluctuations, and Ethereum fell 15% in two hours. However, the Maker agreement once again proved its robustness, and Dai's price effectively stabilized at around $1. With the single-backed Dai upgrade to multi-mortgage Dai, the Maker system will be able to more effectively balance market volatility and Dai's price will be more stable.

Chen Weigang of the China Banking and Insurance Regulatory Commission (CBRC): The recent supervision of the Joint Commissioner's Office and the Central Committee includes three parts: the prohibition of banks from providing payment channels for speculation.

Guosheng Securities: Under the epidemic, blockchain is expected to make up for shortcomings in social online operations