It will seize more than 14% of the market share of the currency market, and the choice of the top 100 currencies of the top two market value, up to 158.10% of the annual income (Livepeer) – 2019, PoS project and Staking economy can be described as the limelight Multi-party entities such as currency players, project teams, third-party professional operators and so on have swarmed.

But even the first wallet, mine pool, and node service providers are the head exchanges that most people call "breakers." No one can really solve the current pain points in the Staking market .

Attracting participants is the top priority of the current PoS project

Compared with the more mature PoW mechanism of the ecological chain, the Staking economic model of the PoS project is still at an early stage; whether it can solve the PoW ills, effectively reduce the participation of ordinary holders in the chain governance, asset security, and asset liquidity. And so on, all have yet to be verified. Compared with discussing these long-term problems, the increase of the participation of the holders and the market acceptance is the focus of the current stage, and it is also the prerequisite for the subsequent development of the market . 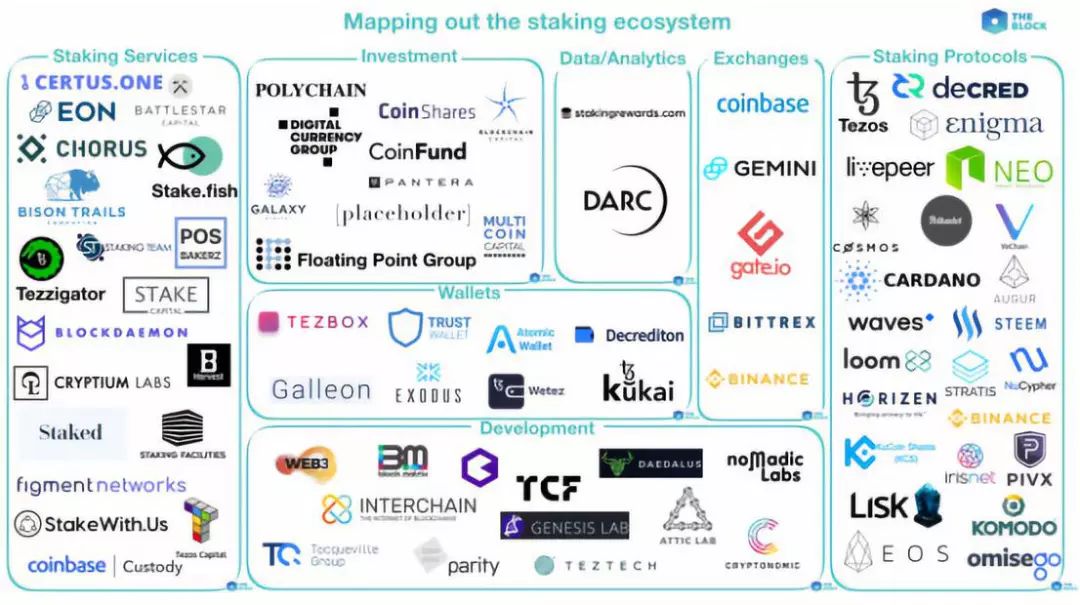 Typical representative company in the Staking ecosystem (image from: theblockcrypto.com)

Undoubtedly, today, the rise of the PoS consensus, Staking Eco has spawned a large number of new business models. Since March of this year, third-party teams consisting of professional service agencies, wallets, mining pools and other operators have poured in; however, as of the beginning of this month, there are still very few users who actually participate in Staking, and the proportion of related projects is always lower than that. 10%, even in the past few months, there has been a downward trend. 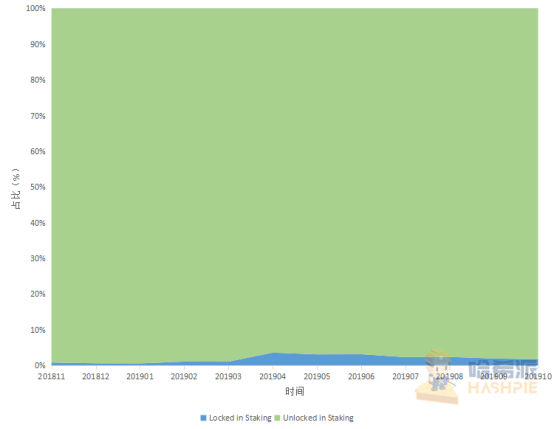 The overall lock position of the PoS project (data from: stakingrewards.com)

In theory, the addition of node operators greatly reduces the barriers to entry for ordinary currency holders, and also addresses the cost and specialization issues that users need to self-verify. However, compared with the concerns about restrictions and risks, most current holders are more concerned about the short-term gains . The wallet supplier, the mining pool, and the related services of the node service organization are unable to set the basis of the usual transaction during the Staking lock period, which is enough to make their attraction greatly reduced. Although entrusting operators to participate in this model is commonly known as lying down, it can earn "money", but in fact, users only get new issuance of new coins, the actual income has to look at the rise and fall of the relevant currency before and after the lockout.

Take the top ten projects on the StakingReward website as an example. If I took out $10,000 to participate in the ten Staking projects a month ago, I would roughly estimate that the current earnings will be as tragic as shown in the table below. Excluding ATOM and IOTX, where prices have risen during the month; the actual monthly returns for the remaining eight projects are negative, with losses ranging from $1412 to $4,295. Therefore, in the cryptocurrency market where prices are changing rapidly and the current bear market is not scattered, the lock-up period of more than 20 days makes the user's profit and loss situation uncontrollable, not to mention the good or bad . ※If one month ago (September 10th), the project that invested 10,000 US dollars to invest in the top ten of Staking investment scores; now (September 10) can obtain the currency standard and the dollar-based income as shown in the above table (data from: Coinmarketcap, StakingRewards, StakingReward Calculator)

From an investment perspective, this operation is similar to the Staking model of short-term time deposits. The yield is not high, and now it has to bear the price risk during the lock period. Unless it is a large funded user or a firm long-term Holder, there is not much reason to convince yourself to participate; after all, the profit-taking method of the lock-in rebate is not as good as the transaction for the small-capital holder. control.

Soft Staking is full of flexibility, but the symptoms are not cured?

Since the fixed pledge incentives are not attractive enough, can the recent Soft Staking model of "free and easy to take, free to go" proposed by the exchange to stimulate the market's interest in participating in Staking?

According to Michael Cou, the founder of KuCoin, the Staking rules designed by the exchange are more user-friendly. Users can passively obtain Staking income if they store the corresponding currency. If they want to trade, they can buy or sell at any time without any pledge. withdraw. When the currency announced the pledge platform at the end of last month, it also stated that it would adopt a plan with full flexibility to seek greater benefits for the holders of the currency as much as possible without affecting user withdrawals and transactions. On the surface, Soft Staking's approach does balance the user's trade-offs between liquidity and profitability to some extent; allowing Staking participants to double their gains during the rise in currency prices, as well as a sudden drop in currency prices. Timely stop loss and leave. However, after the fish and the bear's paw are difficult to achieve, it is necessary to make a relative sacrifice to the annualized rate of return behind the freedom to follow and to go . 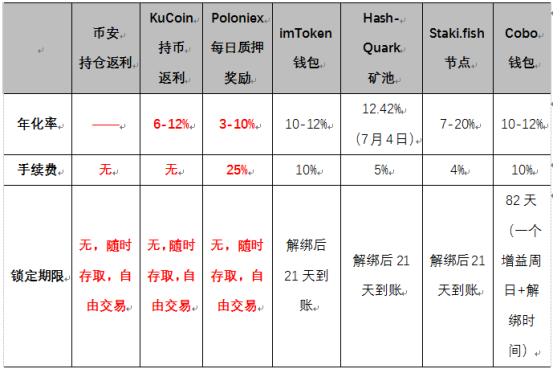 Specifically, in order to balance liquidity requirements, the exchange does not take all of the user's assets to pledge, but analyzes and dynamically adjusts the pledge ratio based on actual data. It is for this reason that the annualized rate of return of the platform is fluctuating daily and is generally lower than the service providers with lock-up periods. Take KuCoin, which is an early entry, as an example. Since its Staking platform was launched, the annualized rate has basically declined. And this annualized rate level is almost negligible for small holders, especially those who frequently trade; it is clear that they do not tend to hold money because they can repay (also can be understood as participating in Staking). . Moreover, the exchange's locked position, that is, the profit model is not completely without threshold, as shown in the currency official website, the Staking project it supports has more or less the limit of the daily minimum position. In the case of large-volume users or a firm long-term Holder, it may be preferable to choose a service provider with a lock-up period because the relatively high and stable annualized rate of return seems to be more in line with their needs. In a sense, the Soft Staking mode provided by the exchange is only one type of domain differentiated service, providing users with different options for different trading habits. Although the influence of the brand effect of large exchanges including Coin, Poloniex, etc., may attract many users to participate in Staking. However, in the current Staking and even the entire cryptocurrency market, users are still more concerned about the issue of income; and from the perspective of annualization rate and incentive mechanism, the exchange does not seem to give the market more new value. There is no influx of new users, no better Staking incentives or profit-making mechanisms, and the current low market participation problem remains unresolved.

To be sure, at this stage, whether it is a professional operator that needs to lock the warehouse, or a freely traded exchange, the Staking service plan stays in the adjustment of the currency itself. These internal adjustments have not injected more promotional elements into the market; unless the bull market is launched, even if the participation mechanism is flexible or the annualized rate of return of the currency is higher, it is not enough to attract users. Nowadays, the market is not yet mature, and the value of competing currency applications has not yet been truly reflected. The lack of Staking mode is far from the optimization of annualization ratio and participation freedom, but more diversified or more precisely not limited. Incentives and profit-making mechanisms in the currency standard ; after all, the cryptocurrency of the market is not only the ups and downs, but also the ecological application is not so long.

Bitcoin technology pioneer: In the long run, Bitcoin sidechain will weaken the influence of the altcoin