What kind of problem does safe multi-party computing solve?

Secure multi-party computing solves the problem of two or more users collaborating to perform a computing task without leaking their private input information in a multi-user network that they do not believe. Let us give an example.

Example: Suppose, you, Xiao Wang and Xiao Li want to know the average salary of the three people, but do not want to disclose their specific salary, then what method should be used to achieve this goal?

Solution 1 : Traditionally, if there is a trusted third party, the problem is easy to solve. For example, you, Xiao Wang and Xiao Li have a boss who trusts each other. You can tell your boss about your salary. The boss promises not to disclose any salary and calculate the average salary of the three. Finally, tell everyone about the average salary. 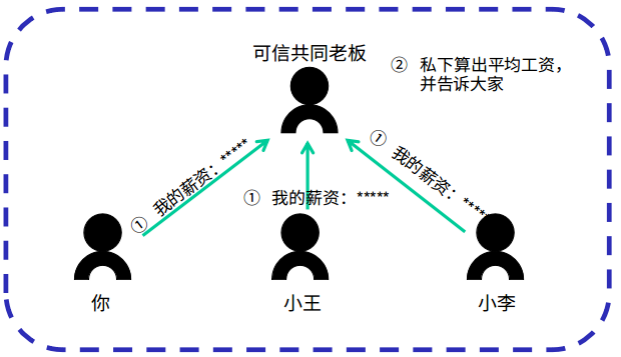 Solution 2 : In reality, it is not always possible to find such a trusted third party. In this case, you can use safe multiparty computing to solve the problem. In short, it is to replace the trusted third party with an algorithm.

We introduce an easy-to-understand secure multiparty computing protocol based on secret sharing. First, we need to review a simple mathematical theory. Two points can determine a straight line, and three points determine a parabola. The process of the agreement is divided into three steps. 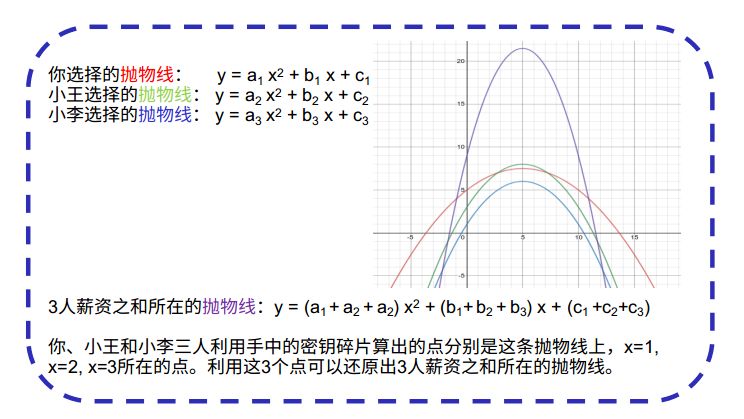 Phase 1 : The introduction of two-party security computing from Yao Zhizhi has been around for more than 30 years. Later, various different security multi-party calculation algorithms appeared. Most of these work is only theoretical, because they are too inefficient and not practical.

Phase 2 : To address efficiency issues, cryptographers have developed highly optimized, dedicated, secure multiparty algorithms for a variety of use cases. But designing for each application from scratch does not promote the widespread use of secure multiparty computing.

Among them, the black dot means "yes", the white dot means "no", and the half white half black means only a small number of documents, a small number of examples or part of open source. Different frameworks support different security protocols. Users can select the applicable framework according to actual scenario requirements. Specific secure multiparty computing algorithms, performance, and application examples are covered in our future articles.

Secure multi-party computing, support individuals who do not trust each other, and perform privacy protection calculations without a trusted third party. This is in line with the blockchain industry, which is closely related to the decoupling network of the blockchain, the decentralization feature, and the goal of solving the trust problem.

There are many such projects, such as Datum personal information sharing market, Data Broker DAO's IoT data sharing market, matrix elements of JUGO, iCube, ARPA and so on. As a concrete example, MIT Engima's design in the medical field combines secure multi-party computing and blockchain. They plan to use blockchains for medical data sharing and privacy calculations. They divide the system into three levels, the bottom layer is the blockchain network; the middle layer is the encryption facility layer provided by Engima, providing secret sharing and secure computing functions; the upper layer is the data warehouse layer, there is a data warehouse providing traditional medical data, and there are also Smart contracts, etc. 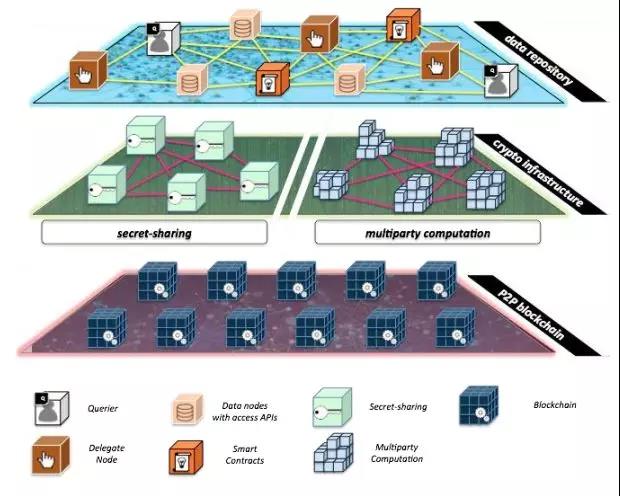 Enigma allows smart contract developers to write what the team calls "secret contracts." A secret contract is essentially a smart contract that works with private data. Enigma's secret contract will have code that is partially executed on a public chain (such as the Enigma blockchain) and that is implemented on Enigma's decentralized out-of-band privacy computing network. The public chain will be used primarily as a security measure to store auditable evidence that the executable code is properly executed. This part of the evidence is called proof-of-MPC.

Key management based on secure multiparty computing . The private key that owns the account in the digital currency indicates ownership of the funds. In order to improve asset security, especially large-value assets, there are currently two options: multi-signature and secret sharing.

l Secret sharing . The Secret Sharing Scheme (SSS) mode divides the key into multiple parts and stores them in a redundant manner. When a transaction is initiated, a certain number of keys are reassembled into a key for signing. This solution can also tolerate the risk of partial key theft, and solves the shortcomings of the above-mentioned multi-signal cost. However, SSS has one major drawback: when the key is reassembled, it gives the attacker an opportunity to get the key.

It is based on multi-party secure computing technology and uses two independent (partial) keys instead of the traditional single private key pattern. One of the keys is stored on the phone (accessed with TouchID/FaceID) and the other is stored on the ZenGo server. When the transaction is in progress, the phone and the ZenGo server communicate to complete the signature.

For example, in the small ant consensus algorithm, after the bookkeeper is voted for, a person will be randomly selected to come out. The bookkeeper uses Shamir's Secret Sharing Scheme (SSSS) to collaborate to generate random numbers. The SSSS scheme is usually used for password sharing. Through the SSSS scheme, N ciphertext fragments can be generated by ciphertext S, and the ciphertext S can be restored by holding the K shares. The bookkeeper (assuming there are N +1) can reach a consensus on the random number through three steps.

Step 1: Each biller chooses a random number, generates the N pieces by the SSSS scheme, encrypts them with the other N biller's public keys, and broadcasts them to other billers.

Step 2: After receiving the broadcasts of the other N billers, decrypt the part that can be decrypted by yourself and broadcast it.

Random numbers are generated collaboratively by individual billers, and as long as there is an honest biller involved, even if all other billers collude, the random number cannot be predicted or constructed.

1. Network latency, transmission rate, packet loss, and number of nodes can seriously affect the amount of data stored in secure multiparty computing, memory allocation, and transmission. In the blockchain system, especially in the public chain system, how to overcome the difficulty and improve efficiency is one of the difficulties.

2. How to cooperate with the chain and the chain, how to verify that the participants correctly performed the safe multi-party calculation is another difficulty.

Although there are technical difficulties, I believe that secure multi-party computing technology is a very promising technology. And after years of development, it has been very close to landing. The combination of secure multi-party computing and blockchain technology is also very suitable. In the future, it may become a common infrastructure together with the blockchain, solve the trust problem and release great value.

Economic Daily: Focus on the development of core digital industries such as artificial intelligence, blockchain, 5G