On October 14th, the cross-border squatting group took a photo with a screen chain and two coins.

At the closed-door summit of Dragonfly Crypto Summit in Beijing, Shen Nanpeng, Feng Bo and the founder of the US group Wang Xing stood on both sides, in the middle of the Ethereum founder Vitalik Buterin.

Among the four, only V God is a block of people born and raised. However, the other three big coffees have a lot to do with the blockchain.

In recent years, Shen Nanpeng’s Sequoia Capital and Feng Bo’s Source Ventures have many investment cases for blockchain companies. Although Wang Xing is not directly involved in the blockchain industry, it is a fever-rated “criticist” of this new technology. It was once called “the most concerned about the blockchain in the Internet”.

The closed-door meeting, which was gathered together, was called "Feng Bo Bureau", and the co-founder of Dragonfly Capital was Feng Bo, who made him east.

When the "Feng Bo Bureau" came out, this argument is now a bit outdated. Perhaps, from a business perspective, there is never a contradiction between "classical" and "emerging". Who will be unable to get through with money?

An autumn rain sent Beijing into the season of wearing long pants. However, on October 14th, a five-star hotel in Chaoyang District was not cold. At the Dragonfly Crypto Summit meeting, Vitalik Buterin, born in the “Fighting People”, had only a short-sleeved T-shirt on his body, standing in Shen Nanpeng and Feng Bohe. Between Wang Xing, there is a "C position". 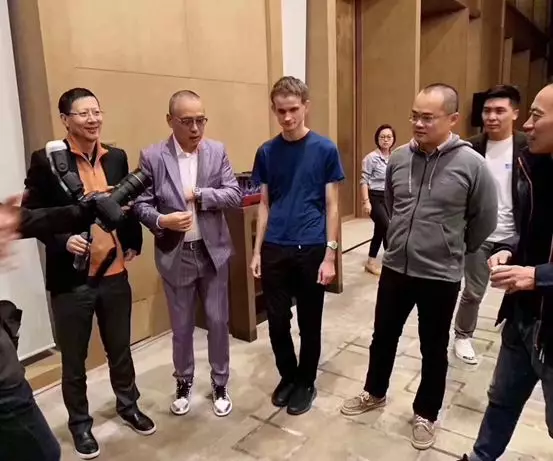 Unlike the coolness of V God, the other three big brothers wrapped themselves tightly. The sharp contrast quickly gave birth to a paragraph. Someone is ridiculed,

“From the perspective of wearing, the blockchain represented by V God is very hot, and the classical Internet represented by Wang Xing is in the cold winter.”

In recent years, the blockchain has set off a new round of technological revolution in the world. In early 2018, Xu Xiaoping, the head of the real fund, called on the entrepreneurs to “ALL IN” blockchain.

Nowadays, the representatives of the classical Internet and the leader of the blockchain field are in the same frame, and the imagination is naturally connected.

Dragonfly Crypto Summit is a closed-door meeting with a theme around cryptocurrency. From the flow of the meeting schedule, in addition to the four people in the photo, Bit Continental co-founder Wu Jihan, Dfund founder Zhao Dong, OKCoin founder Xu Mingxing, fire coin founder Li Lin and other blockchain industry The heavyweights will all be present, and Sequoia has invested in a number of projects involving blockchains. The conference's operator, Feng Bo, is an investment pioneer in this industry.

The topics discussed by the guests include cryptocurrency, smart contracts, DeFi and exchange structure. From the content point of view, this is a complete blockchain industry conference. The emergence of the founder of the US group Wang Xing is particularly special.

Some people think that Wang Xing wants to do things in the blockchain industry; there are also people who have supplemented the scene of Wang Xing and V God exchange:

Wang Xing: I heard that your currency is very lively. I want to check it out.

V God: Come and come, the younger brother can bring you…

Wang Xing appeared in the US group?

One of the four people's thoughts is the possibility of the blockchain of the US group. The Internet company that originated from the group buying website is not only the founder showing interest in the blockchain, but many people who have served in the US group went out to start a business. I chose the blockchain.

Wang Xing has repeatedly talked about the blockchain in his personal meal. Because he likes to study history and philosophy, his interpretation of the blockchain is very interesting, macroscopic and insightful.

In August, Wang Xing once commented that the principles of Chinese history and blockchain are a bit like the fact that each dynasty gave history to the former dynasty, just like creating a new block. It is not absolutely impossible to tamper with it, but it must be mastered by more than 50%. Calculation power.

In June, when Libra was launched, Wang Xing was among the commentators who were optimistic about it. He said that discussing the technology behind Libra is not as good as the printing technique for discussing dollar bills.

"In this great change, if Nakamoto is compared to Marx, then the small tie is equivalent to Lenin. It is indeed a genius design."

As a graduate of Tsinghua University, the head of the Internet giant, Wang Xing is not strange to express a recognition of the blockchain that is in line with the Internet. However, he feels good about the blockchain, but the US group does not currently have specific areas.

However, many people who went out from the US group took the lead in investing in the blockchain.

In May 2018, Liu Chunming, the head of the former group's original taxi technical team, established the decentralized application platform Vite. At the same time, the US co-founder Yang Jun announced that he and the founder Chen Weixing founded the car chain VVShare; September 2018 On the 10th, Li Shuang, the general manager of Meituan Yunyuan, left the company and created the blockchain project BonusCloud…

"Mei Tuanbang" has always maintained a large-scale march into the blockchain. Wang Xing's enthusiasm for the blockchain has gone from online commentary to offline participation. This is inevitably confusing, when will China's largest life service platform, the US group comment, apply the blockchain, can it promote the development of blockchain technology?

There is no source for the answer, but the enthusiastic users of the currency circle have not bothered. It has been suggested that the US group can use the blockchain to better protect user privacy and solve disputes such as take-away complaints. 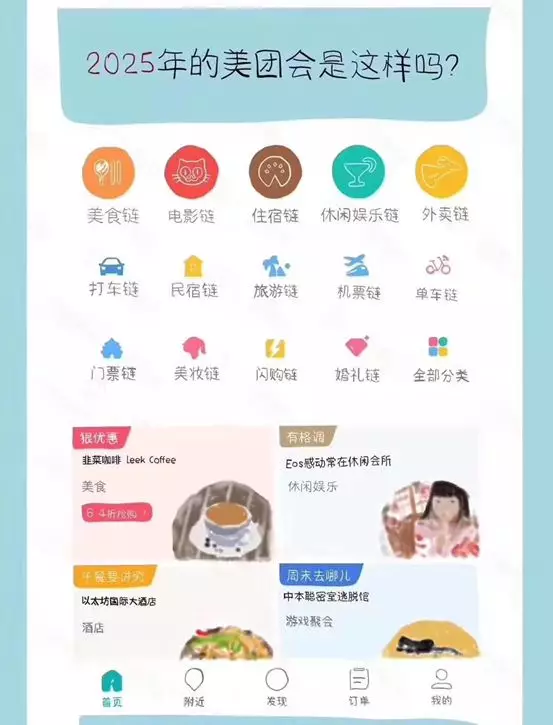 2025 US group page map made by netizens
Others have produced a 2025 page map of Meituan, in which all applications are related to blockchain technology. In many people's minds, Wang Xing will one day enter the blockchain. The photos from this closed meeting seem to increase this possibility.

Feng Bo Bureau, the "contradictory theory" in Wang Huiwen's mouth seems to be a bit untenable. In fact, both the classical Internet and classical capital are “reconciling” with blockchains in a variety of ways.

Ma Yun loves the blockchain has long been a secret. He once said in public that "Alibaba, which has no blockchain, will die." Today, e-commerce giants such as Alibaba and JD.com have applied blockchain technology and explored their future possibilities.

The other two capitalists who appeared in the photo – Shen Nanpeng and Feng Bo, can be described as "classical capital", and now they all make a difference in blockchain investment.

Looking at the information in the past, Shen Nanpeng’s Sequoia Capital began investing heavily in blockchain and currency companies as early as last year. In the list of “2018 China Blockchain Investment Institutions Top 20” released by Chain Tower Think Tank, Sequoia Capital China and Coin Capital and Real Fund are among the top three influential. From the investment map, Sequoia Capital invested in the blockchain project IOST, Ontology (ONT), SOC (All Sports Coin), Nervos Network, DeFi project Veil, US stock and encryption trading platform Robinhood. Behind the two well-known coin giants, there is also Sequoia Capital, the “classical capital” that people think of, and the investors of the Fire Exchange and Bitmain.

Feng Bo and his source venture capital also have a position in the blockchain field. It is the most well-known and successful investment in the currency circle, no doubt OKCoin and OKEx. At the same time, it also invested in the CoinBene full currency, digital currency futures trading platform basefex and other exchanges. The source has a soft spot for the most profitable trading platform.

As a global development trend, the blockchain has long been the focus of the classical Internet and classical capital. After all, the “old capital fritters” who have stepped on the wind are very good at catching the cusp.

The Honeycomb Financial Search found that behind the blockchain and cryptocurrency startups, there are also many “classical” investment institutions such as Innovation Workshop, Morningside Capital, Lanchi Venture Capital, Zhenge Capital, and Hongtai Fund.

Behind Shen Nanpeng, Feng Bo, V God, and Wang Xing, the boundaries between the blockchain and the classical Internet are becoming blurred. More and more Internet and capital giants are entering the market.

Perhaps, from a business perspective, there is never a contradiction between "classical" and "emerging". Who will be unable to get through with money?

Interaction time Do you think that the US group can use the blockchain to do something? After being hacked, the encrypted exchange Zaif will resume operations