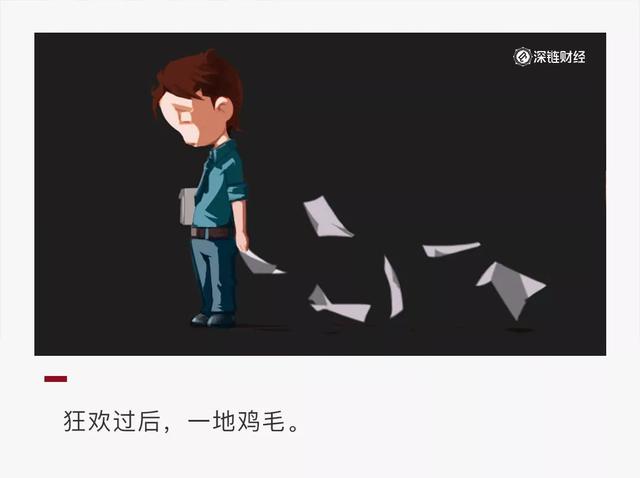 With the collapse of Bitcoin at the end of September, there has been such an argument.

It is difficult to predict whether Bitcoin will fall to $5,000, but what investors say is that "cryptocurrency is a scam" is based on the fact that the IEO project in the first half of 2019 has broken, smashed and ran away.

I know that IEO is crazy and tragic, but the truth may be more terrible than most people think.

According to deep chain financial (ID: deepchainvip) statistics, as of October 10, 2019, 17 exchanges, including currency security and fire coins, launched a total of 87 IEO projects, raising more than 295 million US dollars, or a contract worth 2.09 billion yuan. .

Among the 87 projects, 3 projects lost 99%, close to zero, 41 with losses exceeding 50%, and 33 without losses. The median return on investment is -45%, which means that the vast majority of investors are losing money.

This is only the data purchased at the issue price. If it is bought at a high price in the secondary market, the loss will be more serious.

Deep Chain Finance (ID: deepchainvip) counts the highest gains of the platform exchanges in 17 exchanges, the IEO projects on the line, the average return rate of the projects and the highest rate of return. 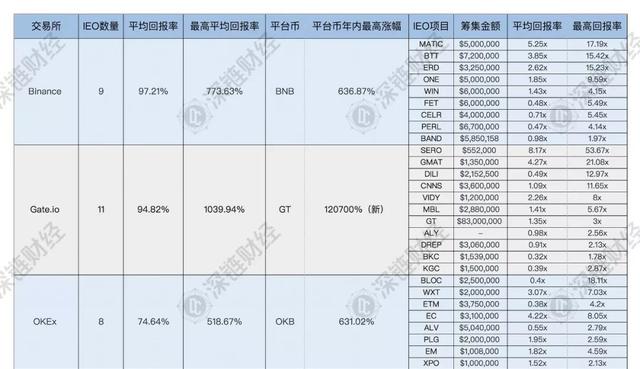 87 IEO projects raised more than $295 million in funding, and according to lCObench, lCO raised $425 million in September. From the point of view of the amount of funds, the channel for the project party to obtain funds is mainly lCO.

It can be seen from the data that if each IEO project is involved in the purchase price and only 33 projects are still profitable, only 37.93%. If you buy at a high price in the secondary market, then this ratio will be lower. The three projects with the lowest rate of return, SKP, SQR and MGC, are both -99%. If you buy these items for 100 yuan, you can only get back 1 yuan.

Of the 17 exchanges, only 6 exchanges have an average return that is still positive. The average return rate of the currency is up to 97.21%. DigiFinex has a minimum of -90.86%, which is equivalent to investing 100 yuan, and finally only 9.14 yuan.

As of October 10, the IEO projects on the BitMart, Ethfinex, BitTrex, Binance DEX, LBank, and DigiFinex exchanges all fell below the issue price.

Among them, the project without Bitcoex platform is broken on the line, and the average yield of all IEO projects is -63.3%. 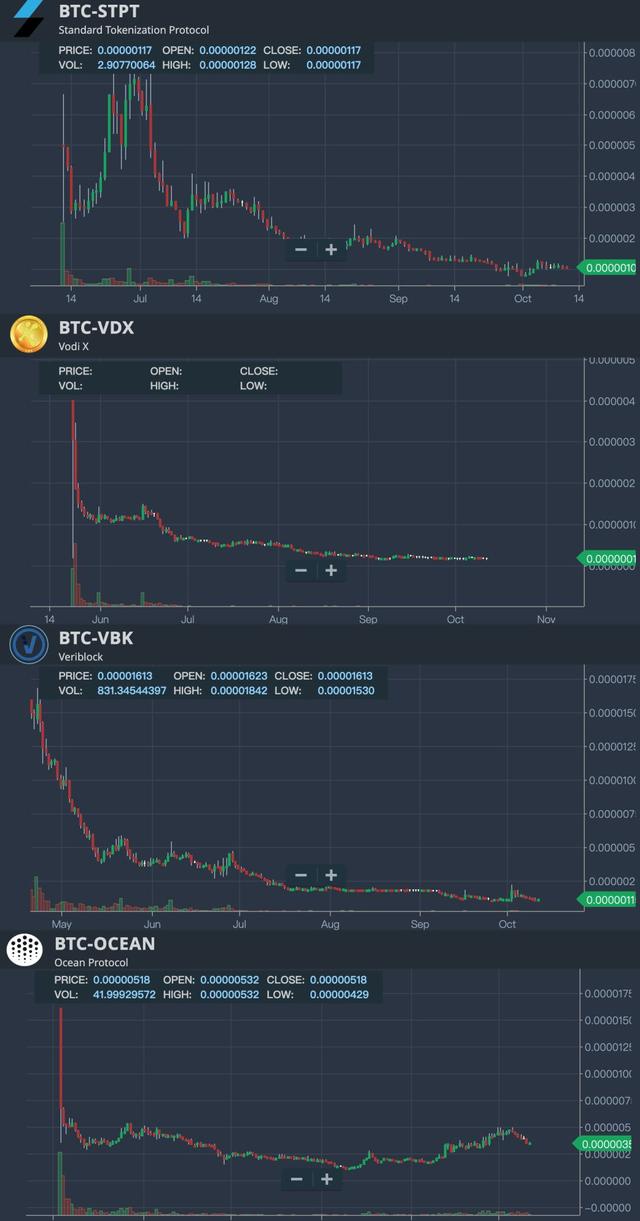 IX, DXN and other projects after the cash out of "death"

After an in-depth investigation of some projects, Deep Chain Finance (ID: deepchainvip) found that multiple IEO projects have been "dead."

Bibox launched X-block (IX) on April 25, and raised a total of 990,000 US dollars. After the launch of Bibox, IX began to plunge all the way. Today, the price is maintained at 0.0001 (the lowest price of Bibox), which has been more than a month, and there is almost no volume.

The last tweet of IX is still in May, and the content is about the online bb.vip exchange. However, the announcement of the official website of the bb.vip transaction indicated that “the X-Block was delayed due to the progress adjustment of the project” and there was no following.

Upon inquiry, its official website x-block.io has been unable to log in, and the website ranking has fallen from a cliff in mid-April. In the Ethereum browser, you can see that only 537 addresses are held by IX, and the top ten addresses hold 66.42% of tokens.

In fact, DEXON did not do publicity, and after May, DEXON's Facebook and blockchain were never updated.

Huang Weining, the founder of DEXON, was also disclosed to create the exchange Cobinhood and raised 400 million Taiwan dollars through the platform currency COB. The team was disbanded due to internal chaos.

When questioned by the DEXON open source foundation, Huang Weining denied it. However, it is hard to deny that DEXON's GitHub was only updated once in 2019, and the test network has been shut down.

DEXON was taken down by LBank in July and survived for less than three months.

In addition to X-block and DEXON, there are a number of projects that only maintain social network updates, ensuring that they are “alive” in the eyes of investors.

If the exchange does not raise the demand for platform currency prices, then there is no strict requirement for the “quality” of the IEO project. For example, the only cost of BitTrex's IEO project is the currency fee.

Similarly, there is no platform currency for Bince DEX (non-Binance). As long as 1000BNB, the project side costs are low, so the IEO project on Binance DEX has a low increase and all breaks.

So, is it necessary to choose an IEO project that is launched on a big exchange?

In fact, not only is it unreliable, but the exchange may still be an accomplice.

For example, Huobi Prime Lite's first project, ThunderCore (TT), on May 9th, immediately went up from 0.015 to 0.048, and then plummeted all the way. On the 11th, there were rumors that the team had loaded 50 million and 30 million TTs respectively into Upbit and Firecoin before the transaction.

Immediately after TT's earliest unofficial community, ThunderFans issued a message stating that it ceased operations and publicly broke with the project side. The TT price was hit hard by the departure of chief scientist Elaine. At this point, TT has fallen by 90.04% compared to the highest point.

In addition to TT, the second phase of the Huobi Prime project, the Newton Project of Fire Coin, was also revealed as “cutting leeks”. Today, it has fallen by 79.84% compared to the highest point.

Of course, there are also direct exchanges between the exchange and the project side. Bibox announced that it would suspend the Staking (SKR) project two hours before the launch of the Bibox Stellar, and then SKR issued a message indicating that the real fuse is that Bibox is asking for a margin.

After the farce, the Bibox platform BIX has fallen 72.57% from its highest price. SKR moved to the BiKi exchange, and it immediately jumped 10 times on the line, then immediately plunged back to the original point, and now it has plunged 99.59% at the highest point.

In the opinion of analysts, it is precisely because the interests exist in every aspect of the IEO, so there are motives for evil in both the project side and the exchange. From the data point of view, IEO is only suitable for speculation rather than investment.

After the fiery IEO, there may be an IXO, and the speculative wind will not stop. For investors, always remember that before the speculation, the currency market is risky and speculation should be cautious.

Analysts: Millions of Bitcoins haven't entered the market for more than a year