The Ethereum Annual Developers Conference DevCon 5 just came to an end in Osaka, Japan. The conference discussed the future development of Ethereum, DeFi construction, trading and circulation. According to Coindesk statistics, the conference attracted about 3,000 people. DevCon is a conference for all types of builders, such as developers, researchers, client implementers, infrastructure operators, community organizers, and more.

In fact, DevCon is equivalent to the annual offline meeting of the Ethereum Technology Community. On the one hand, the development of blockchain requires developers to continuously complete technical challenges, making new technologies mature enough to be applied to business scenarios or social governance. On the other hand, more developers need to join the industry to promote qualitative change with quantitative accumulation. . In this process, the technical community, especially the online technology community, has always played a vital role. The technology community provides developers with a wealth of learning materials, a platform for mutual communication, and even career development opportunities. PANews data news column PAData sorts out well-known technical communities at home and abroad, showing the current status and what issues developers are concerned about.

PAData selected five well-known technical communities, namely Github, Reddit, Stack Overflow, CSDN, Nuggets, to observe the activity of these communities through the amount of content and website traffic. In theory, the greater the total traffic of the website, the flow to the block. The greater the traffic to the chain, the more active this technology community will be.

The most popular is Reddit, a technology community for the general public. This is an online community similar to Baidu Post Bar, where users can post, reply, and vote. According to Similarweb, Reddit's UV (independent visitors) was approximately 1.297 billion in September, PV (page visits) was approximately 863 million, and global traffic ranked 19th. Entering the keyword "blockchain" on the Reddit home page shows 266 posts, but actually there are more posts on the blockchain on Reddit. Many blockchain projects now have their own communities on Reddit. For example, Ethereum has more than 400,000 fans on Reddit.

Github is an open source code base and one of the well-known technology communities. SimilarWeb shows that its global traffic ranks 78th, September UV is about 312 million, PV is about 798 million, and PV is about twice as much as UV means Github User stickiness is relatively high in the technology community. As of October 10th, searching for the keyword "blockchain" in Github can search for 55190 related code bases and 12156 related users. Among them, the most forked project is Ethereum's code base, ethereum/go-ethereum, which has been forked 8800 times. This is also the most popular code base for developers. There are 24,400 developers who like it. . But the most popular among programmers is not the technical bull, but a "professional blockchain commentator" named Peter Wang with 3,700 fans. Stack Overflow is the world's most popular technology community for programmers and the largest professional technology community. The content quality of this community is relatively high. With the increase of users, it has now evolved into a comprehensive community. The main form is Q&A, and the global traffic ranks 193. If you search for the keyword "blockchain" on the home page, you can see 500 question and answer posts, but not completely search, the actual discussion about the blockchain is more than this number. The average response volume of these Q&A posts is about 1.24, which means that every question will basically get 1 reply.

CSDN is the largest technology community in China, with blogs as the main section and rich basic content. SimilarWeb shows a global traffic ranking of 358, with a UV of approximately 233 million in September. At present, users have posted 58,000 "blockchain" related blog posts, but there are only 79 questions and answers about the "blockchain". The average response of these posts is about 1.46, which is similar to Stack Overflow and even Slightly higher.

In addition to CSDN, the domestic technical community is mostly small, such as the Nuggets, the global traffic ranking is only 5,072, the September UV is about 13 million, and the question of the "blockchain" is only 860.

The domestic technology community is popular with "code-taking"

PAData analyzes the contents of the blockchain in Stack Overflow, the largest technology community in foreign countries, and the CSDN in the largest technology community in China. The 300 blog titles and Stack Overflows searched by CSDN with the keyword "blockchain" are keyword "blockchain". "All the tags of the 500 questions obtained by the search are analyzed. After the word frequency statistics, you can find other than search keywords, such as "technology", "development", "learning", "application", "tutorial", "getting started". "node.js", "azure", "hyperledger-fabric", and "ethereum" are frequently appearing words, which also confirms the commonality of the technical community. 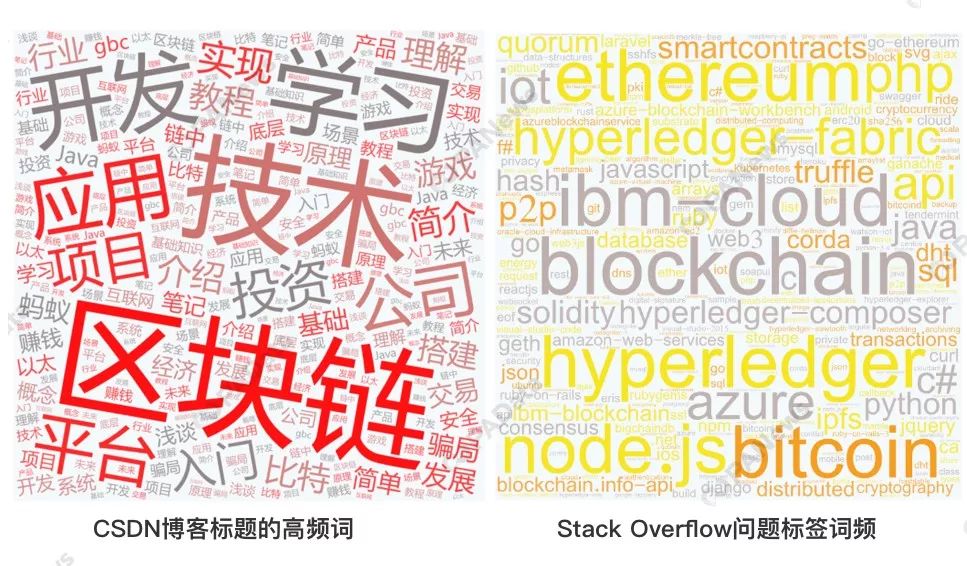 However, according to Tang Xueyan's personal experience, he believes that the atmosphere of the domestic and international technology communities is very different. "The 'bringing' in the domestic technical community is quite popular. Everyone sees a post that will not be said. What, not too much communication, more is to go and see, and then take the contents of this post. There are more exchanges in foreign technology communities, everyone will ask questions inside, and then discuss why this problem can be solved, Why can't the solution be solved, the problem will be biased."

On CSDN, I can really see some source code, and ask for answers, such as "blockchain multi-currency wallet system development app source code", "seeking help, when you install hyperledger fabric… ".

The differences between China and the West in this technical community atmosphere may be related to the deep division of industry behind it. “Chinese programmers are responsible for both programming and code writing, but in foreign countries, especially Japan, programming, writing code and products. The manager is an independent three people. If you are programming, you don't need to write code, and you won't go to the community to ask the code." This difference in labor also makes Chinese programmers better in technical practice, while abroad. Programmers may be better at algorithms and technology research. “Everyone may be more inclined to some foreign communities, but in fact it is not much different from domestic and foreign.” Tang Xueyan believes that due to language restrictions, the domestic technical community is more suitable for Chinese developers to get started.

"Language must be a big problem. English is not our native language. Even a programmer with a very high level of English, but his collocation, word accuracy and syntactic accuracy are completely unable to meet the needs of using search engines, but These rhetorical skills are critical to finding what you need, and you can't find what you want because you don't search, not online."

The discussion topic of the technical community has a certain lag

In addition to searching for keywords, the high-frequency words in the question mainly include "problem", "contract", "error", "call", "deployment", "big god", "big bang", "how", "Error". "What", "js", etc., that is, most developers will go to the community to find answers when they have problems deploying or running code. 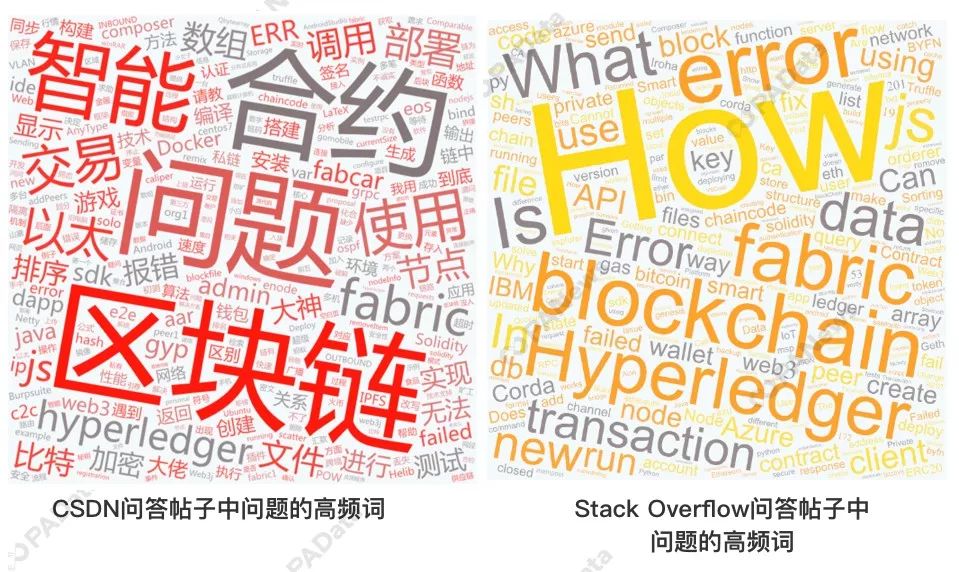 From this perspective, although many projects have published detailed developer documentation, few of them have been published in the community, and this is exactly what developers need to know.

It is also worth noting that developers at home and abroad are concerned about the Linux-led alliance chain project hyperledger, which is especially popular among developers. Tang Xueyan believes that this is mainly affected by regulatory risks. “The current policy environment is not very transparent to cryptocurrencies, so many large companies use super-books when using blockchain technology.”

If the time factor is also used as one of the influencing factors of the subject, then it can be found that the topics discussed in the technical community at home and abroad have certain technical lag. PAData observes this lag by analyzing 300 blog titles obtained by CSDN with the keyword "blockchain" and all the tags of the 500 questions that Stack Overflow searches for by keyword "blockchain".

In the technical community, one of the main motivations for landing in the technology community is the developer's practical needs, but the practice is often lagging behind the technology front, so the topics discussed in the community are usually not the frontier of the technology, such as the blockchain field. The frontier "slice/cross-shard", "cross-chain/cross-chain", "Zero-Knowledge Proof", etc. are not present in the list of high frequency words. In general, “development”, “application”, “technology”, “learning”, “platform”, “hyperledger-fabric”, “C#”, “ethereum”, “node.js”, etc. are always of concern to developers. Focus. 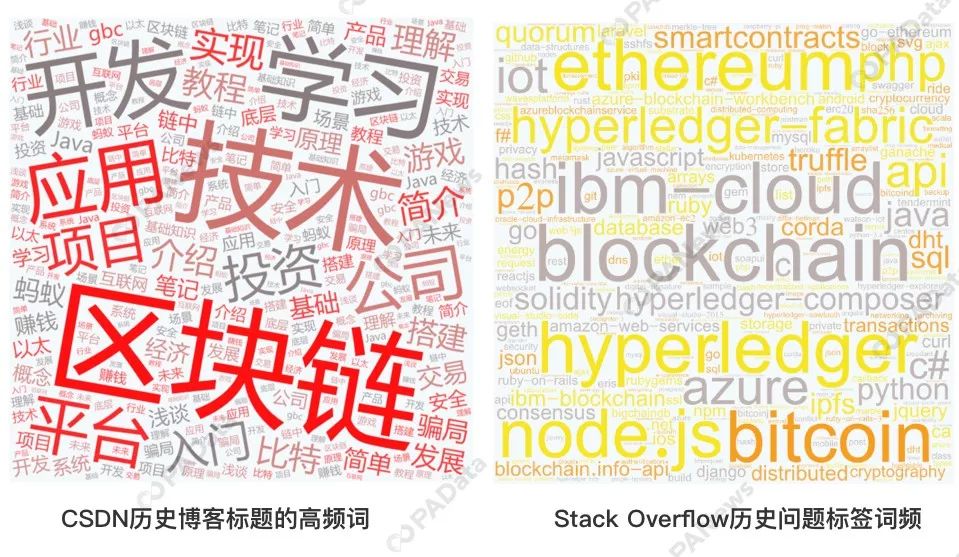 Although there is a certain lag in the overall situation, the content of interest in the technical community still shows some subtle differences. For example, domestic developers have recently paid more attention to “payment”, “digital wallet”, “security” and “game”. In terms of content, foreign developers have begun to pay attention to "transaction", and the focus on "go" and "solidity" is significantly higher than in the past.