The filing project not only has a certain increase in the number, but also the admission of the national team.

Observing from the main body of the record, not only the BAJ, the blockchain concept stocks, the technology faction, etc., but also the national team's admission. According to the incomplete statistics of the inter-chain pulse, a total of 23 items in this list are from national functional departments, state-owned enterprises and other organizations.

The second batch of blockchain information service filing projects released this time has been greatly improved in number, but the filing projects are also from 18 provinces and cities. The difference is that the Hunan, Shaanxi, Guangxi, and Ningxia Hui Autonomous Regions on the first record list are not on the list, and the blockchain information services in Hebei, Anhui, Liaoning, and Shanxi provinces are on the record list.

The inter-chain pulse further counts the provinces and cities to which the blockchain information service of the record belongs. 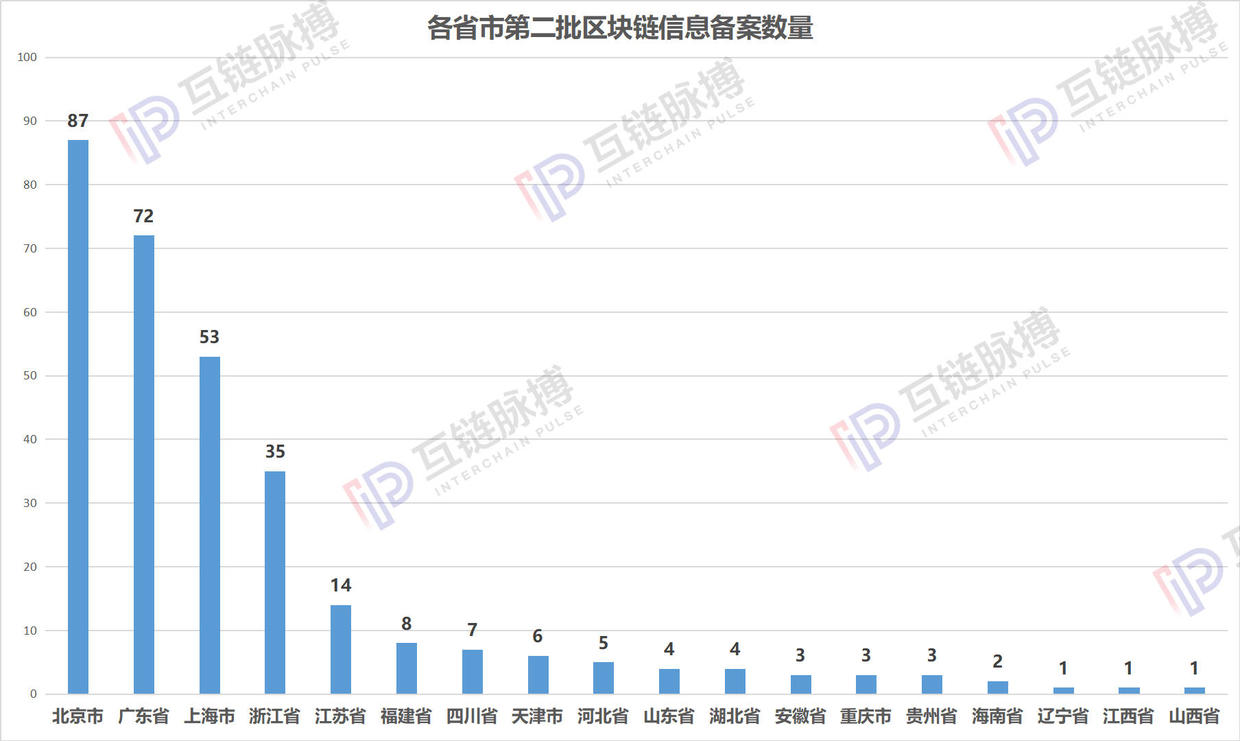 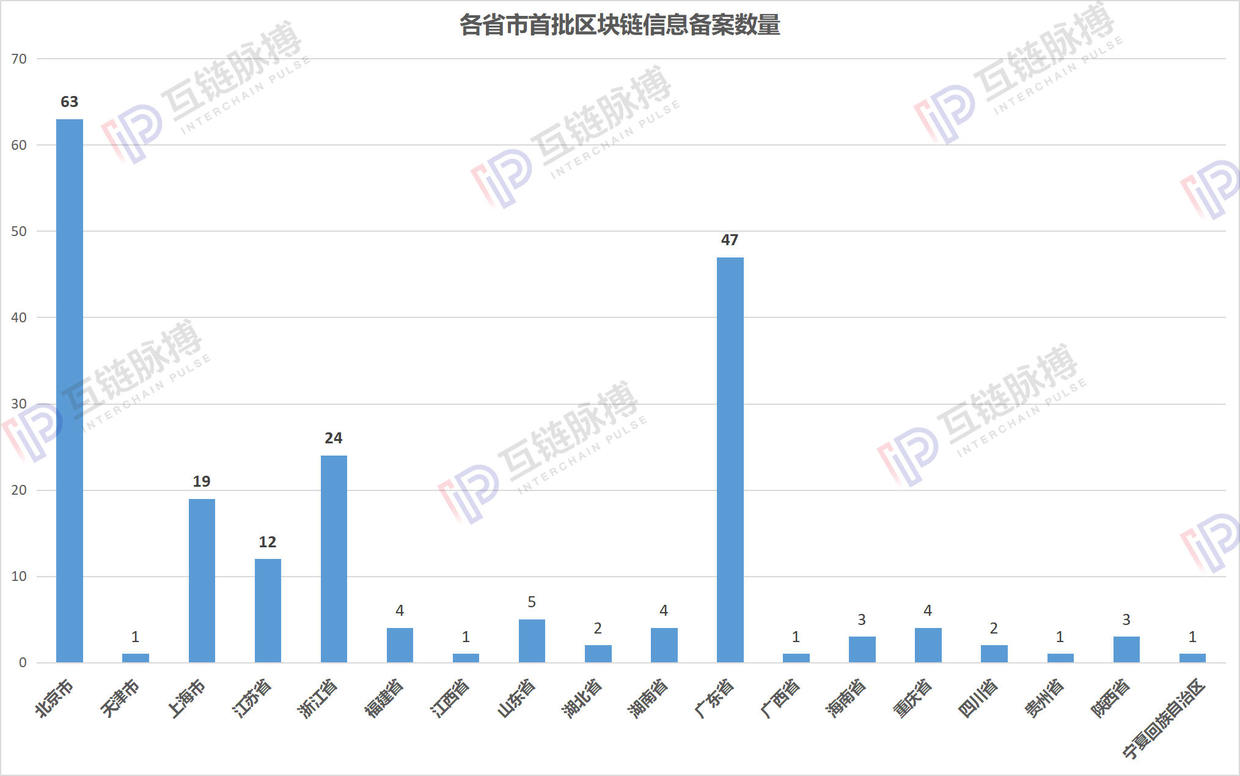 In addition to Beishang Guangzhe, the number of filings ranked fifth is also in Jiangsu Province. There are 14 blockchain information services through filing, and there were 12 last time. At the same time, in these two filings, the number of projects in Shandong Province and Fujian Province ranked in the top ten.

The national team is more and more obvious

In March, the inter-chain pulse had observed the first batch of blockchain information service types, which seemed to be inconclusive. Among the published filing lists, there are both air currency projects and government-led blockchain projects; the sponsors include small companies without official websites and large enterprises such as BATJ.

In the list of records announced this time, the national team seems to be more prominent.

According to the incomplete statistics of the inter-chain pulse, in the list of blockchain information service filings announced this time, a total of 23 organizations from state functional departments and state-owned enterprises. 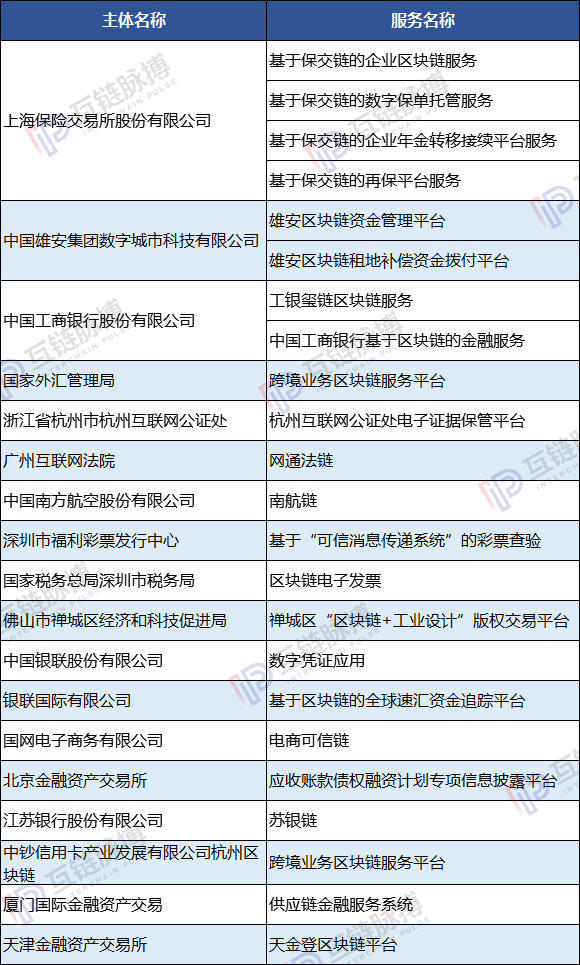 Among them, the largest number of blockchain information services through filing is the Shanghai Stock Exchange, which is controlled by state-owned enterprises. Shanghai Insurance Exchange Co., Ltd. is directly managed by the Bank of China Insurance Supervision and Management Committee. This time, there are a total of blockchain services based on the insurance chain, a digital policy hosting service based on the security chain, an enterprise annuity transfer connection platform service based on the security chain, and a four blockchain based on the insurance chain. Information service.

In addition, the government projects that were well-known and have been applied to the landing application were also on the list. For example, the electronic evidence storage platform of the Hangzhou Internet Notary Office; the Netcom legal chain of the Guangzhou Internet Court; and the blockchain electronic invoice of the Shenzhen Taxation Bureau of the State Administration of Taxation.

There are traditional technology companies with concept stocks and technical schools.

With the entry of the national team, it is natural to have a traditional technology company like BAJ.

In the last filing, Baidu and Baidu invested in iQiyi, a total of five projects passed the record; Ali's ants Jinfu, Ali investment, shares of the company, a total of six projects through the filing; Tencent, Tencent led A total of 7 projects were approved for the projects initiated by Weizhong Bank and Tencent's fund-funded enterprises; there are 4 projects in Jingdong.

The number of large-scale enterprise filing projects has been significantly reduced, and Tencent, which has passed the most projects in the first filing, seems to have missed the blockchain filing.

At the same time, the inter-chain pulse is concerned that blockchain projects launched by well-known companies such as Ping An and Suning are also on the list. Ping An Bank's Ping An Bank Co., Ltd., Ping An Insurance Agency Co., Ltd. and Shenzhen Yitongtong Intelligent Technology Co., Ltd. have a number of blockchain information services through the filing; Suning Cloud Computing Co., Ltd.'s BlockX, Suning blockchain platform passed the record. 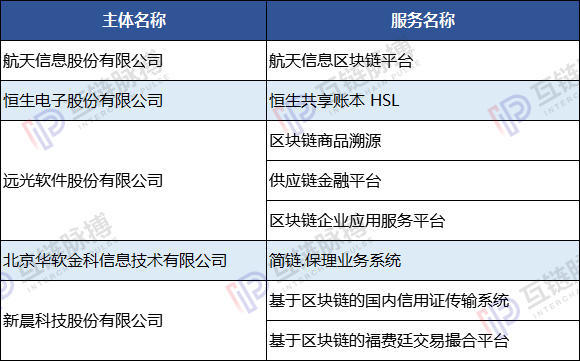 Data: Although Bitcoin fell to a six-month low, most of the currency-bearing addresses are still "profitable"