why? Because no one else dares to say that?

Also, you don't have to always agree with this article. If you disagree and can clearly express your objections, you may be able to elevate yourself faster. ?

What is the monetary policy in the field of encryption?

The term encryption has borrowed from the central bank the term monetary policy. For bankers, monetary policy is how a country sets interest rates and money supply to grow GDP and manage employment, and maintain a predictable exchange rate to ensure that all of these do not have excessive inflation. The cryptocurrency does not involve the mission of growing GDP or managing employment, and its distribution plan does not consider these factors. This makes the supply of cryptocurrency like gold without political pressure. Both gold and cryptocurrencies are non-sovereign assets .

But unlike gold, cryptocurrencies actually have a monetary policy mission: to maximize the protection of blockchain networks .

Gold is formed by the chemical bonds formed by the energy released by the supernova explosion. [Note: Supernova is a violent explosion experienced by some stars as they approach the end of the evolution. Some scientists believe that gold comes from supernova explosions]. The cryptocurrency is the product of human design, and its security comes from the economic value of the crypto asset itself and the corresponding network monetary policy.

The monetary policy of legal currency and cryptocurrency has different missions:

In the following, I will continue to use the term " monetary policy " to discuss BTC and ETH, but considering the above missions, using the "issuance policy" may be more accurate. And I even prefer the term "security policy" because this is the real goal.

What is protecting BTC and ETH?

Let's first discuss how to protect BTC and ETH. The security of the blockchain network is based on economic stimulus . Without strong economic incentives, these networks are vulnerable to attack.

For example, 51% of attacks can steal funds by reversing transactions on any blockchain network . This type of attack only needs to control 51% of the " funds " used to secure the network. In Bitcoin and current Ethereum networks that use the PoW (Workload Proof) mechanism, this “funding” refers to the hardware and energy used for mining ; Ethereum 2.0 with PoS (Equity Proof) mechanism In the network, this "funding" refers to the ETH token .

For blockchain networks, good security means that the cost of the attack is higher than the value that the attacker can get from the attack .

The difference between a high-value chain and a low-value chain can be seen from the time required for the settlement of the transaction . For example, the cryptocurrency exchange Coinbase only needs to confirm 6 times for the BTC transaction (about 1 day), but it needs to confirm 1,008 times for the BSV transaction, which is equivalent to 7 days to complete the settlement! (See the image below) This is because Coinbase needs to protect itself from 51% attacks by checking the number of times. 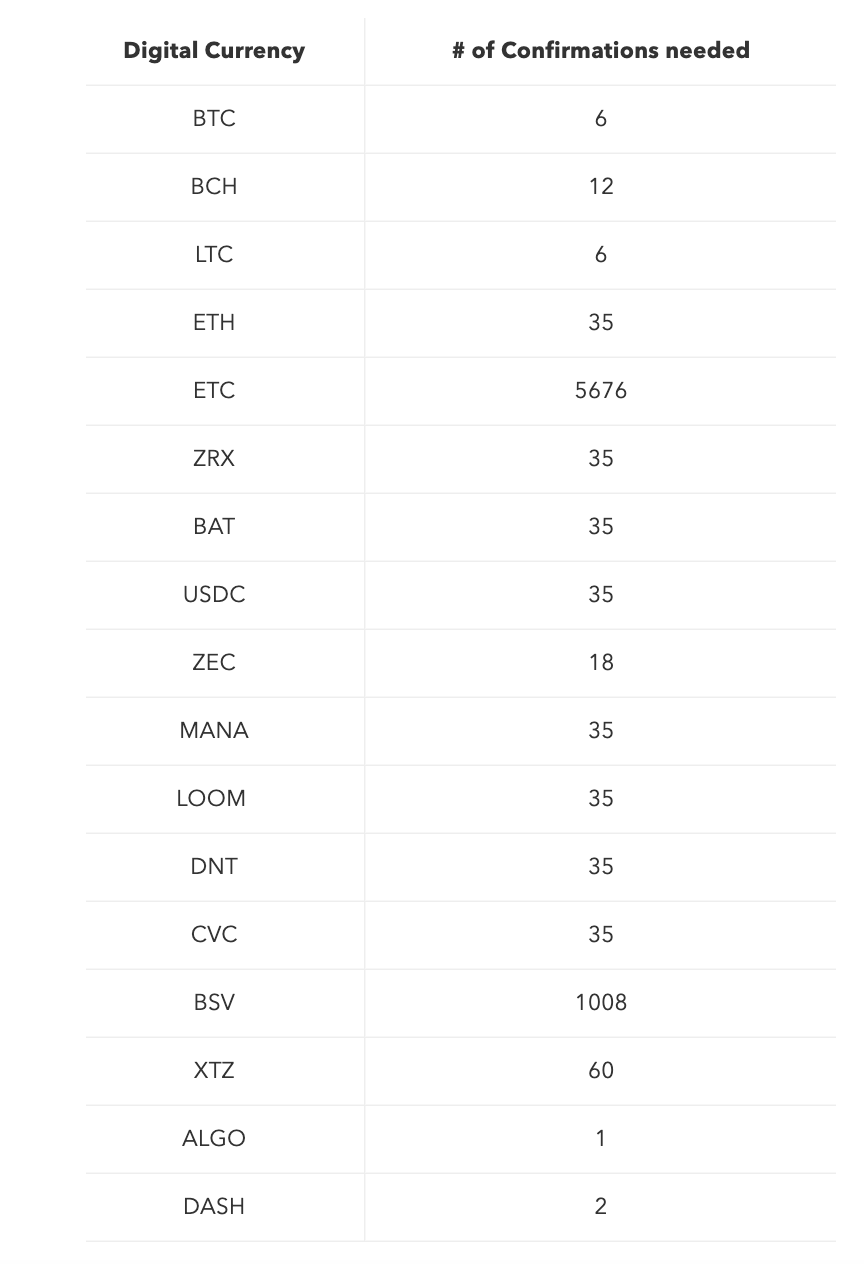 and many more! Why are these "funds" initially put into the protection of these blockchain networks? This brings us back to the topic of economic incentives : miners invest money to protect the security of Bitcoin and Ethereum networks because they get paid ! They are involved in making money. The income of miners comes from two aspects:

The combination of the two is the income of the miners . These benefits are the security budget for the blockchain network .

Let's make an analogy. Imagine a country that wants to mint new currency every year and tax economic transactions to pay for defense spending. This is similar to what Bitcoin and Ethereum are doing: the new currency is the “block reward” and the tax is the “transaction fee”, which together is the security budget for the military (miners).

Safety is mainly due to block rewards

So what factors will drive the rise in ETH prices? The need for ETH assets! The same is true for BTC .

So, what does this have to do with BTC's monetary policy?

The issuance of cryptocurrencies and network security

You may know the timing of Bitcoin's release: very simple, block rewards are high at the beginning and are halved every four years:

After that, the block reward of Bitcoin will tend to be 0 .

Remember the only mission of the cryptocurrency policy we mentioned above? That is to protect the security of the blockchain network to the greatest extent!

The benefits of block rewards increase as BTC demand increases (price increases), while demand growth is driven by BTC scarcity, which is achieved through BTC's declining block-reward monetary policy. Maintained. This is really a virtuous circle!

This is the powerful advantage of Bitcoin.

But there is also a flaw in it.

With each block reward halved, this "advantage" will be weakened in terms of protecting network security :

Each halving will reduce the network's security budget subsidy, making the security of the Bitcoin network less dependent on "block rewards" and increasing the dependence on "transaction fees" .

Ultimately, the security of the Bitcoin network will depend almost entirely on the need for block space (transaction fees): by 2032, BTC-denominated block rewards will only account for 6% of current block rewards.

Of course, we can assume that the value of BTC will rise by then. For example, if the price of the BTC rises to $14,000 by then, the security budget of the Bitcoin network will remain the same as in 2019. But is the level of security budget for 2019 enough for the bitcoin network that is already trillions of dollars?

Authors such as Hasu recently wrote a great paper [1] that lists some of the future solutions for the ever-decreasing bitcoin mining incentives. One of the solutions is to change the monetary policy of Bitcoin and increase the permanent inflation of BTC , that is, not to set the supply limit of BTC, so that BTC has more than 21 million.

Such a move will undoubtedly lead to the fork of the Bitcoin network. In addition, this will undermine the scarcity of BTC and its irreversible modification, which is why some people think Bitcoin exists.

Others believe that the benefits of Bitcoin's transaction fees will fill the gap in block rewards. I don't agree . It is unclear whether block space requirements will become a core advantage of Bitcoin .

Even today, Ethereum is comparable to Bitcoin in terms of transaction fee income , as shown in the figure below. This is because Ethereum is a settlement network for many digital assets and currency agreements – because of the widespread use of Ethereum, it is not surprising if Ethereum's transaction fee income exceeds Bitcoin in the next few years.

From this perspective, you might think that Bitcoin's monetary policy is at the expense of its long-term cybersecurity, but only its short-term security. It is this way that guarantees the scarcity of BTC and guides users to obtain the liquidity dominance of BTC.

But Ethereum uses a completely different monetary policy , which has different trade-offs – although it certainly has its flaws, its advantages are often underestimated.

We will discuss the trade-offs of Ethereum's monetary policy in the next article. Stay tuned!

[The copyright of the article belongs to the original author. The content and opinions do not represent Unitimes' position and do not constitute investment opinions or suggestions. 】