The author of the former Greek finance minister, Yanis Varoufakis, is the leader of the MeRA25 party and a professor of economics at the University of Athens.

The Libra Association is being torn apart. Visa, MasterCard, PayPal, Stripe, Mercado Pago and eBay have abandoned Facebook-led business alliances, the Libra Association, based on Libra, which supports cryptocurrencies designed to revolutionize international currencies. As the government is determined to stop Libra, more and more members of the association may follow.

This is a good thing. If Facebook is allowed to use Libra to privatize the international payment system, humanity will suffer. However, authorities now obstructing Libra should look to the future and adopt some innovative, useful and far-sighted approach: handing over Libra or its core concepts to the International Monetary Fund (IMF) so that it can be used to reduce global trade imbalances. Rebalance the flow of funds. Indeed, a cryptocurrency like Libra can help the IMF achieve its original purpose.

When Facebook CEO Mark Zuckerberg announced Libra in a big way, the idea sounded interesting and harmless. Anyone with a mobile phone can purchase Libra tokens in their own currency and through standard methods such as debit cards and online banking. These tokens can then be used to pay other Libra users, whether it is to buy goods and services or to repay debt. To ensure complete transparency, all transactions will be handled by blockchain technology. However, in sharp contrast to Bitcoin, Libra tokens will be fully supported by legal assets.

In order to fix Libra on tangible assets, the association's supporters promised to use their income and the seed capital provided by their member companies (at least $10 million each) to purchase highly liquid, highly rated financial assets, such as US Treasury bonds. Given Facebook's leadership role, it's not hard to imagine that there is a moment when half of the adult population on the planet (2.4 billion active Facebook user representatives per month) suddenly has a new currency that can trade with each other and bypass the rest of the system.

The initial reaction of the authorities considered this to be unfavorable. By emphasizing the potential criminal use of Libra, they have only succeeded in validating the suspicions of liberals that regulators, politicians and central bankers would rather kill free currency innovation in the face of the threat of losing control of money. Regrettably, the biggest contributors to illegal activities are old-fashioned cash and, more importantly, Libra, even if it has never been used to finance terrorism or criminal activity, poses a systemic threat to our political economy.

Starting with the negative impact of Libra on individuals, recall the great efforts of most countries to reduce fluctuations in the purchasing power of their currencies. As a result of these efforts, today, one hundred euros or more dollars have purchased more or less the same goods to be purchased next month. However, this is not the case for a hundred euros or dollars converted into Libra.

To some extent, Libra will be supported by assets denominated in multiple currencies, so the purchasing power of Libra tokens in any given country will fluctuate more than the national currency. In fact, Libra is similar to the internal accounting department of the International Monetary Fund, the Special Drawing Rights (SDR), which reflects the weighted average of the world's major currencies.

To understand what this means, consider the exchange rate volatility between the US dollar and the SDR in 2015 as high as 20%. At that time, an American consumer exchanged $100 for Libra, and they would bear the pain of watching the domestic purchasing power of tokens fluctuating like a yo-yo. For developing country residents whose currencies are easy to depreciate, Libra’s currency exchange facilitation will accelerate the depreciation of the country’s currency, exacerbate domestic inflation and make capital flight more likely and more visible.

Since the financial crisis of 2008, the authorities have been trying to use deflationary fiscal and monetary means to manage inflation, employment and investment, which seemed to work well before the crisis. Libra will further weaken our ability to maintain the economic cycle. As the tax base shrinks, the effectiveness of fiscal policy will be affected, and each payment will be transferred to a global payment system residing on Facebook. A bigger shock will wait for monetary policy.

Good or bad, our central bank manages the volume and flow of money by extracting or adding paper assets to the inventory held by private banks. When central banks want to stimulate economic activity, they buy commercial loans, mortgages, deposits and other assets from private banks. Then, the bank has more cash to borrow. And vice versa, when the authorities want to cool the economy. However, the more successful Libra is, the more money people move from their bank accounts to their Libra wallets, and the weaker the central bank's ability to stabilize the economy. In other words, the more members who fly to Libra, the deeper the turmoil and crisis that plagues the people and the country.

The only beneficiary is the Libra Association, which will collect huge interest income from assets from around the world and will use the vast majority of global savings that attract its payment platform to accumulate these revenues. Soon, the association will succumb to the temptation to provide credit to individuals and companies, from a gradual transition from a payment system to a large global bank, which no government can afford to bail, supervise or resolve.

Because of this, it is a good thing that Libra and Zuckerberg's dreams become a global private payment monopoly. However, we should not throw high-tech babies away with monopolistic bath water. The trick is to entrust the implementation of this idea to the IMF on behalf of its member states to reshape the international monetary system to reflect the recommendations of the meeting of the International Settlement Alliance announced by John Maynard Keynes at the 1944 Bretton Woods Conference. .

In order to implement this new Bretton Woods system, the International Monetary Fund will issue blockchain-based tokens similar to Libra, which we call “Kosmos”, which is freely floating with the exchange rate of the national currency. People continue to use their national currency, but all cross-border trade and capital transfers are denominated in Kosmos and through their central bank account at the IMF. The trade deficit and trade surplus create a trade imbalance levy, while private financial institutions pay a proportional fee based on the surge in foreign capital flows. These penalties are generated in an IMF account that is named after Kosmos and operates as a global sovereign wealth fund. Suddenly, all international transactions become frictionless and completely transparent, while small but significant fines can control trade and capital imbalances, finance green investments, and remediate North-South wealth redistribution.

The catastrophic idea that will be in the hands of clumsy private owners should be pushed into the public service arena. In this way, we can benefit from their originality without sacrificing their design.

The Libra Association is considering a “stepped” approach to KYC regulations

Today’s panic and greed index is 40, and the level of panic is slightly relieved. 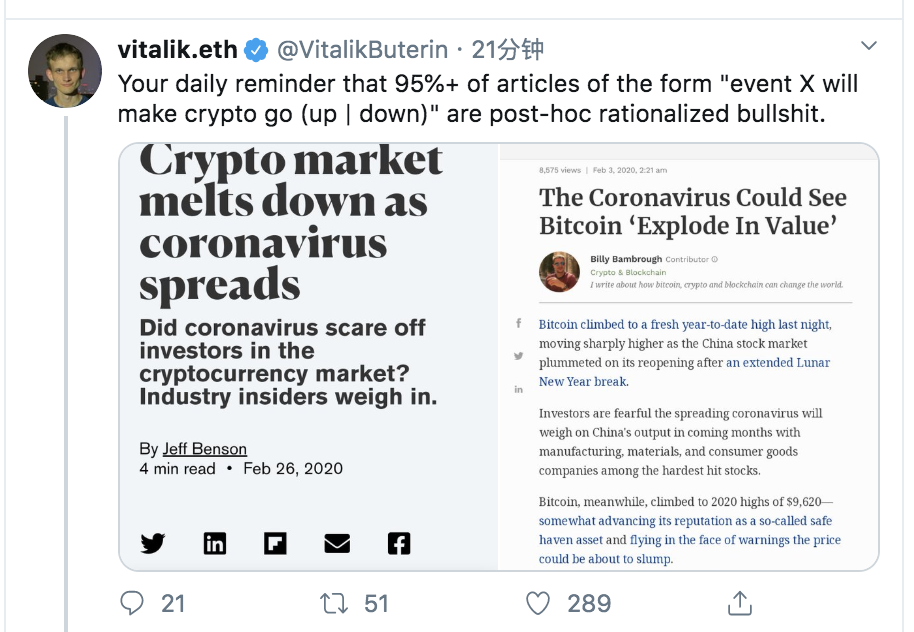 God V: "An Event Will Make Cryptocurrency Up / Down" Is Reasonable Nonsense After The Event