The medium-term view remains unchanged and the adjustment is not over.

The 6th World Internet Conference was held in Wuzhen. Liu Zhenmin, the UN Under-Secretary-General, said at the opening ceremony that the development of the Internet is changing people's lives, and new technologies such as artificial intelligence, big data, blockchain, and Internet of Things have emerged. Technology is still in the development stage. The market immediately showed a small increase. From the personal point of view, it still maintains a medium-term bearish. The short-term news stimulus can not change its trajectory. The market will return to its own rhythm. The current round of the market has not changed the direction of the market. The megatrend still remains downward, so I personally think that there is no reason to do more, knowing and doing, and staying on the sidelines.

BTC has been slightly affected by the news, and the volume is still shrinking. The longer the sideways time here, the worse it is for the market, because it will form a certain set of plates, and then think again. It is difficult to pass this interval, or to maintain the previous point of view. At present, it is still a range of volatility. The 5-week line has been basically completed. Now I don’t see any tendency to stand back to the 5-week line. I personally think that no matter which one. In terms of the target, the target does not have the expectation of a sharp rebound. It is still oscillating near the lower shadow line. The long and short sides have not yet won the match, but they have already tested the support of $7,700 four times. If this time, the point will be lowered again. If it is, it is likely to fall below the support of this point. Personally, the next support is expected to be around $6,800-6,900. If the target regains its 5-week line and the 5-week line turns upwards, the conclusion is not valid. 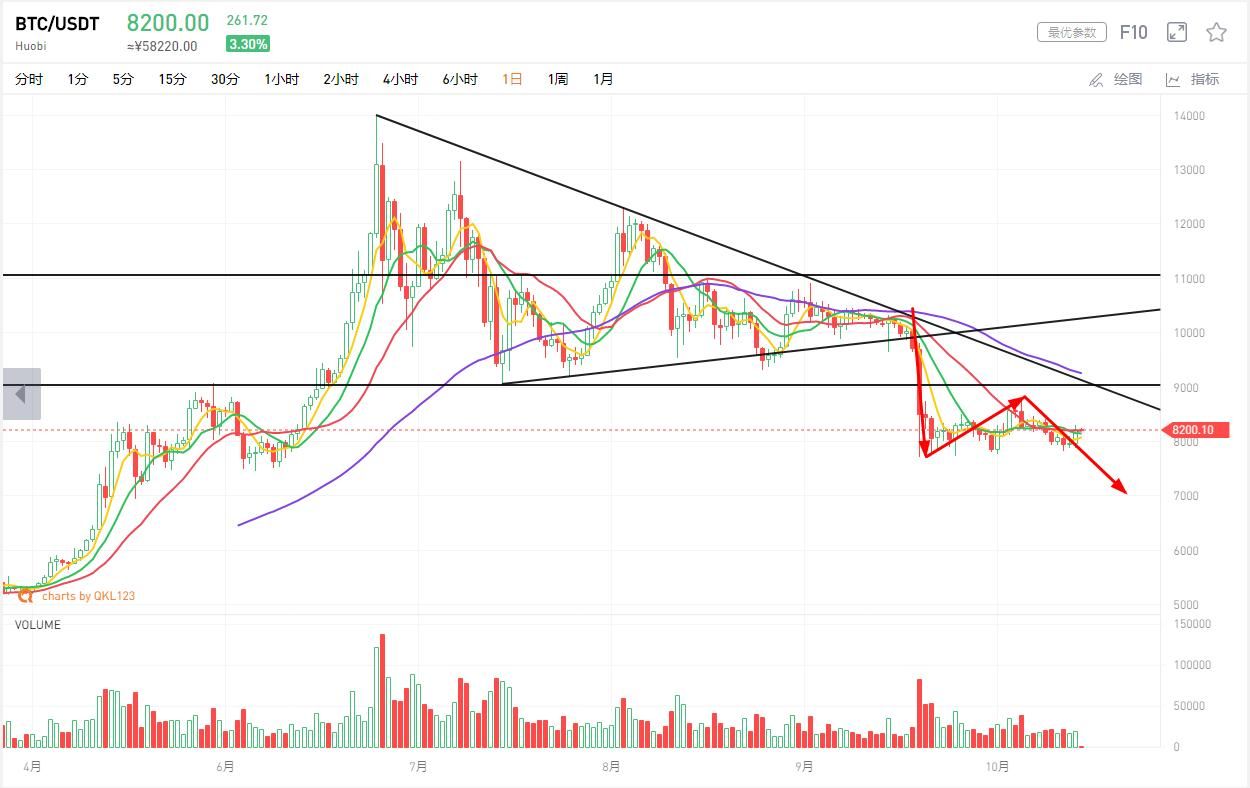 ETH has also been slightly stimulated by the news, and the strength is not strong. It is still near the 5-week line. The weekly-level moving average system basically presents a short arrangement. The unstable BTC trend also restricts the ultra-chassis. The influx is basically consistent with the previous judgment. The current volume cannot continue to support the substantial rebound of the target. At present, the target is less likely to follow the independent market, and the probability is to follow the market, even if the target wants to go independent. Need to sway in this place to repair the moving average indicator, personally think that the anti-draw on the Yinxian line on September 24 has basically ended, then will continue to look for the bottom support, and I personally look at the target is relatively empty, I think the target may Will be new low, it is recommended that everyone pay more attention to the BTC and platform currency varieties, a popular, a potential performance support, of course, only my personal opinion, pay attention to risk.

Popular science | 9012 is about to pass, do you understand the blockchain?