One of the most popular words in the digital currency field recently is DeFi (Decentralized Finance).

What is this business model? DeFi practitioners shouted every day to change the life of traditional finance. Is this possible?

In fact, DeFi is not mysterious, and the core logic behind it is mortgage digital currency lending.

In the field of mortgage lending, this model is no stranger.

For example, mortgage a house, a car, we can borrow money from the bank.

From such a model that is not mysterious, it has spawned “central banks” and “banks” in the field of digital currency, as well as exchanges and stable currencies.

These players are creating an independent financial system that has begun to penetrate traditional finance.

At this point, the industry began to have to focus on this area and explore the ambitions behind the players.

This article is the first in a blockchain report on DeFi and the Open Finance series.

In the financial sector, mortgage lending is a very common financial product. We can borrow money from houses, cars, and even goods.

Mortgage lending has always been seen as a relatively safe financial lending, because once the borrower does not pay, the financial institution can sell the collateral.

For example, the borrower mortgaged a house with a market price of 1 million and loaned 600,000 yuan. If the borrower does not pay the money, the bank will auction the house. If the price is higher than 600,000, the bank will not lose money and sell more expensive. Still earn.

If the user wants to borrow $100, he needs to transfer at least $150 worth of ETH to the platform. After that, the system will automatically release the money.

Compared with the traditional mortgage model, digital currency mortgage has a unique advantage in terms of operating costs.

For example, a mortgage house, the platform needs to review whether the borrower is the real owner of the property, and evaluate the price of the property.

Once the borrower is unable to repay, the platform also has to pay human and time costs to auction the property.

The same is true for the mortgage car. The financial side has to find a garage to save the car.

These traditional financial mortgage processes are long and costly.

As a digital currency lending platform, there is no need to face these problems.

In this way, the platform will not lose money at all, and this model has almost no risk control.

What do these digital currency lending platforms make?

Like other financial models, it depends on interest. Currently, the industry's annualized interest rate is 9.5%. In contrast, the annual interest rate of ants borrowing is between 10% and 18%.

Currently, the most powerful player in this model is called MakerDAO.

Its founder, Lun, has revealed that MakerDAO has earned $12 million a year through a loan service, and its cost is only $200,000.

In the history of human borrowing for thousands of years, such a low-cost lending model has emerged for the first time. Today, MakerDAO's loan amount has exceeded $80 million.

With MakerDAO as the center, the wave of DeFi is slowly emerging…

After the formation of the lending market, what kind of market will DeFi form? On the MakerDAO platform, after you mortgage the digital currency, you can't get the French currency directly, but you will get a stable currency that is anchored with the US dollar.

Many people may ask, why does MakerDAO not directly give users legal currency, but create another digital currency?

In fact, MakerDAO has a lot of ambitions. They want to be the “central bank” in the digital currency field and issue a widely used currency.

After they released Dai, many people started to do derivative projects for Dai, such as financial management.

Take Compound as an example. On this platform, users can deposit their own various digital currencies, such as ETH, Dai, to get interest.

At present, the annual interest rate of Dai deposited on Compound has reached 7.37%, which is much higher than other conventional investment products.

We can see that MakerDAO can mortgage assets and issue a stable currency similar to the currency, equivalent to the “central bank”; and Compound can manage money, equivalent to other “banks”.

The release of currency, lending, wealth management, the three core functions of traditional banks, DeFi are already in place. 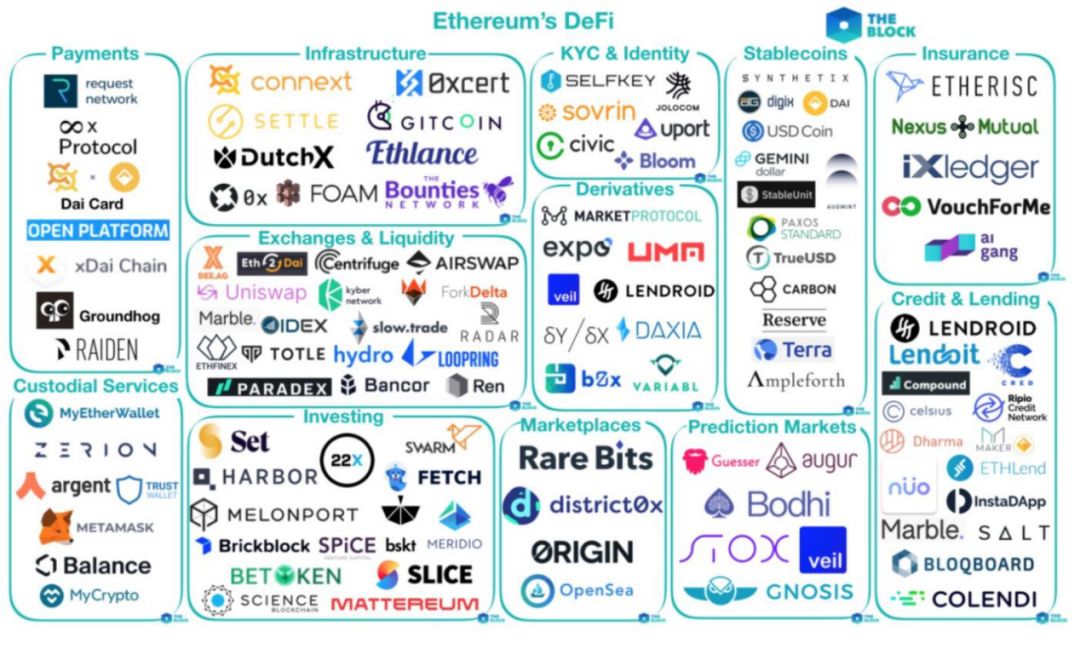 The rise of this ecology has also broken the founder V God of Ethereum.

Because the current digital currency lending, mainly using ETH. After the ICO ebb tide, Ethereum is expected to turn over again with DeFi.

So, how big is the market for digital currency lending?

At present, it is conservatively estimated that the number of global currency holders is 60 million, and the number of people in the tens of millions is increasing every year.

These people are likely to become users in the field of digital currency lending.

The total assets of digital currency have reached 223.6 billion US dollars, equivalent to 1.5 trillion yuan.

The highest point, even reached 800 billion US dollars, equivalent to 5.6 trillion yuan. 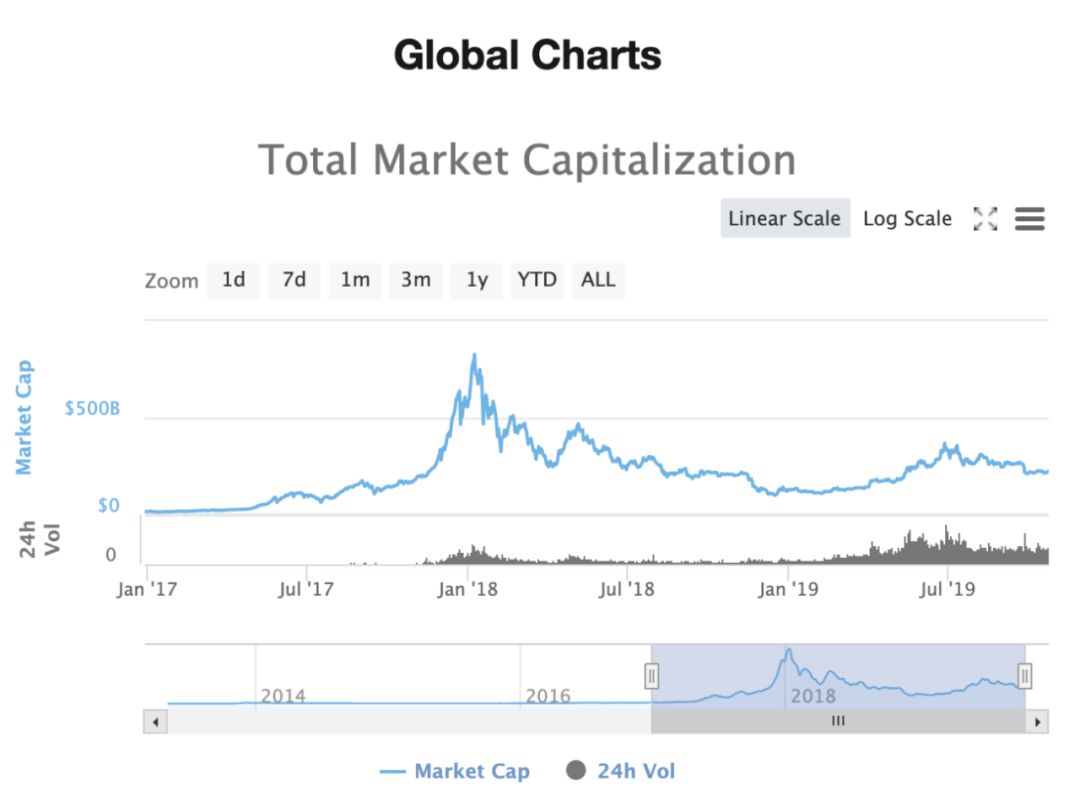 When a market has a trillion scale and the population has a tens of millions of levels, we may not be able to ignore it again.

A new financial system is so quiet.

In the eyes of DeFi players, the financial system they first impacted was actually Internet finance. Lending and financial management in the field of digital currency are all done in real time through smart contracts, and truly “peer-to-peer”.

“So, there is no pool of funds in the digital currency space,” said the founder of a DeFi platform.

But in the eyes of many traditional financial practitioners, DeFi's so-called "financial revolution" in Silicon Valley seems to be just a farce.

“MakerDAO’s financial services can be interesting.” Richard Bernstein, former chief investment strategist at Merrill Lynch, said in an interview with Bloomberg. “But they don’t know anything about financial history, and their ideas are childish. I am deeply shocked."

“They are full of ambitions to disintegrate everything, but they don’t know anything about financial regulation,” he commented.

What is the problem with DeFi today?

Although it seems that MakerDAO's model has no risk control problems, the huge fluctuations in the currency price will also break through this pattern.

In the field of digital currency, a 30% drop in a day is not a novelty. Once there is a black swan event like ETH's sudden plunge, MakerDAO may still "crash overnight."

Because the price collapsed, the platform wanted to sell the mortgaged Ethereum in a concentrated manner, so that there might be a large-scale sell-off, and even if it came out, it could not be produced.

The end result is to accelerate the destruction of Ethereum.

As this model grows bigger, the systemic risk will increase.

“It’s like organizing a meal. It’s easy for two people to have dinner, but to organize 200, 20,000 or even 2 million people to eat at the same time, the difficulty is not simply a multiple increase,” one financial practitioner pointed out.

At present, within DeFi, differentiation has taken place.

Some DeFi fans believe that the ultimate goal of DeFi is to build a "digital currency utopia" that is not controlled by traditional financial giants.

Another group believes that if DeFi wants to land, it must embrace traditional finance.

“MakerDAO relies on existing jurisdictions and central banks.” As one of the representatives of the DeFi community, Lun has publicly stated on several occasions since this year.

"We will not destroy or challenge the authority of any government and central bank."

The Chinese players have their own understanding of DeFi. They feel that this new financial system will not be completely grafted on the traditional financial system. Therefore, they proposed a new term: “open finance”.

On the road to success, too idealistic, may face more obstacles. And depending on local conditions, you may find shortcuts.

In any case, DeFi's butterfly wings are already fanning. It is still unknown when and where the storm will appear.