On May 30, 2019, Telegram launched a simplified version of the platform. Earlier, the news said that if the TON (Telegram Open Network) is not implemented before October 31, investors will withdraw. So the final version of TON should be available soon.

The protection of the TON platform is divided into several levels to prevent the establishment of offending applications. So what are the other features of the TON project? How to implement the TON platform? What is GRAM? When will it start selling? This article will tell you the answer.

In 2018, Telegram announced the issuance of ICO and soon terminated the ICO. The reason is that Telegram has received substantial funding through private placement. Investors injected $1.7 billion into Telegram's encrypted network.

As early as the beginning of 2018, some unknown scammers flicked Internet users to purchase the token GRAM of Telegram messenger (currently not yet). A letter signed by the creator of the TON blockchain system allegedly contains links to fraudulent project sites. The attacker hinted at users registering the network and deceiving them to become the first crab-eaters to buy 3,000 GRAM tokens for $5,000. 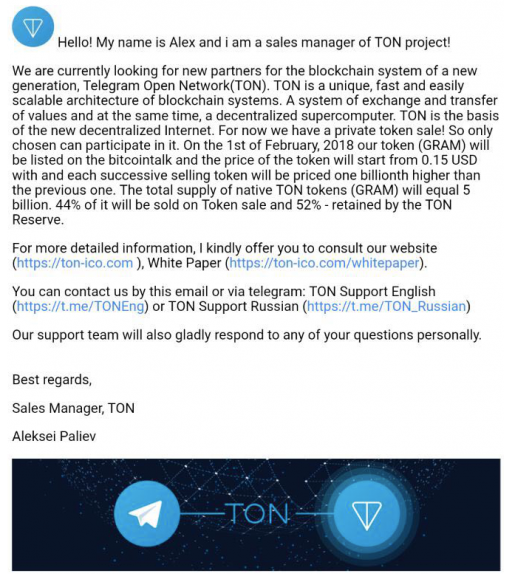 (Figure: letter in the scam)

In February, Pavel Durov reported to the Securities and Exchange Commission (SEC) that it had absorbed $850 million from 81 investors.

In March last year, Telegram raised $850 million from 94 investors in the second round of ICO financing. As early as May, there was news that Telegram refused to disclose ICO.

In September last year, Telegram launched the beta version of the blockchain platform TON. At that time, the TON Virtual Machine (TVM) smart contract mechanism had been completed 95%. Completed the development of the TON blockchain protocol and network.

In March of this year, the price of GRAM token derivatives launched by the cryptocurrency exchange Xena rose from $2.2 to $8.25. The price increase is due to Pavel Durov's project attracting buyers' interest.

In August of this year, investors showed signs of patient exhaustion. Investors who participated in TON's ICO began to sell tokens in the secondary market in hopes of getting rid of the TON project. In the secondary market, the price of each GRAM token falls from $1.60 to $2. Given the cost of tokens in the first and second rounds of $0.37 and $1.33, investors' returns are still quite substantial.

At the same time, according to the agreement, before the TON network is officially launched, investors who stipulate TON ICO may not sell or otherwise transfer the token rights. Violation of this condition may void the placing privilege, so buyers in the secondary market may be at risk and the tokens purchased may be invalid.

In August of this year, it was reported that the unmanaged multi-currency wallet Button added support for TON in the test mode. Users who pay 6.6Gram test tokens to the activation application are free to open.

In early September, TON developers entered the final phase of the full launch project, introducing software to the nodes and introducing a block browser for the test network.

Just recently, developers of the TON network released the first version of the Gram token wallet usage rules, and the news of the Telegram messenger team participating in the project development was officially confirmed for the first time. 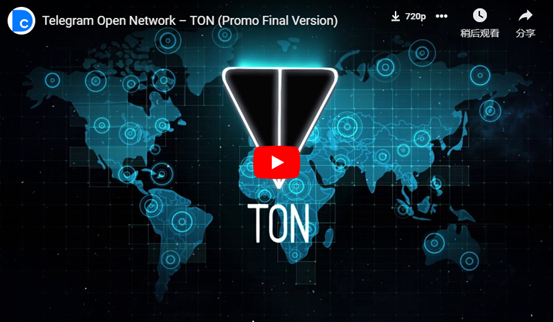 At present, the possibility, speed, ease of use, security, free of charge and global availability of private encrypted communication are the focus of information delivery service providers.

The Telegram team is experienced. Since its inception in 2013, they have not only created an amazing product (Telegram) but also a large-scale application, building a user base of more than 200 million users in just 5 years.

Telegram's blockchain program is ambitious. TON not only has to issue cryptocurrencies, but also to create a complete ecosystem. At present, we understand that TON wallet has been used as a starting point for goods payment for many service providers, such as WeChat.

To enter the TON team, you have to win the world's best programming competition, or get the first place in the national multi-layer coding competition of telegram. Every member of the team is not the same background. The core members of the team have 10 years of experience in creating scalable projects (user bases of tens of millions). Before the creation of Telegram, the team also created the largest social network VK in Europe, with more than 100 million active users, and still no one has been banned.

The team is good at developing a secure data storage engine. The team has independently developed all of the software used on 1,000 telegram servers. Here, the founders of TON are Nikolai Durov and Pavel Durov.

TON consists of the following components:

· TON Storage is a distributed storage (such as YouTube that exists only in a peer-to-peer network) that supports large volumes of files and data to support seed technologies and smart contracts; · TON Proxy is a proxy platform for anonymous users Identity and TON node IP address; · TON Services is a service that integrates dApps and web browsers; · TON DNS is a platform for naming accounts, nodes, services and smart contracts; · TON Payments is a user and merchant A platform for micropayments between.

Among them, TON Storage is a data storage distributed on a large number of nodes. Only users to the user's TON network can call Storage, as distributed as torrents (file seeds). This allows you to run a decentralized Dropbox (online storage), such as storing large files like video on Dropbox.

TON Proxy inserts an anonymous layer that hides the identity and IP address of the TON node. This anonymous layer can be used as a decentralized VPN service provider and a blockchain-based TOR browser alternative. TON Proxy enhances anonymity and privacy protection.

The core of GRAM's value is the platform behind it called Telegram Open Network (TON). TON's blockchain framework is scalable and flexible, and can accommodate the main chain and 229 blockchains.

The main technical characteristics of the TON blockchain are as follows:

· Unlimited fragmentation paradigm . The fragmentation paradigm is indispensable for high-volume expansion. The TON blockchain can be automatically separated and reconnected to accommodate network changes. Quickly dig out new blocks at any time to ensure smooth transactions, so that popular services on TON will not block the network.

· Instantaneous hypercube routing. The TON blockchain uses an intelligent routing mechanism to keep transactions between several Telegram blockchains optimally coordinated. The routing time between blockchains is calculated in logarithmic scale, so it can help more users to trade quickly.

· Two-dimensional distribution of ledgers. TON can replace the previous error block with a new block. Therefore, the so-called hard fork of the blockchain can be avoided. This self-healing mechanism not only saves effort, but also ensures that transactions will not fail due to mistakes.

The initial supply of GRAM is 5 billion or 5 Gigagram. 1GRAM can be divided into 1 billion nanogram or nano units.

· Pay the fuel cost of the TON node (network verifier) ​​for processing transactions and executing smart contracts. · To run the TON node, you need to store the GRAM token on the TON node. · Each GRAM token represents the right to participate. · Users can use GRAM to pay for applications on the platform (TON Services). · Users can use GRAM to pay for the cost of securely distributing stored data (TON storage). · Purchase blockchain-based domains (TON DNS) and hosting services. · Used to hide identity or IP address.

Unlike the recently launched Facebook Stabilizer (Libra), GRAM's price is not linked to any legal currency and can be traded freely on cryptocurrency exchanges. However, Telegram hopes to retain at least 52% of the total GRAM supply and avoid speculative manipulation. Set aside 4% to the team to support the development of the next four years of takeover. Therefore, only 44% of the tokens will be sold to the public.

TON has a special reserve agency to maintain the price stability of GRAM. It operates in the form of a smart contract, equivalent to the status of the central bank, and is controlled by the TON Foundation, a non-profit organization that manages TON.

According to the record, the initial price of GRAM is 0.1 USD. The cost of circulation of the new GRAM will be $1 billion higher than the original:

TON uses the PoS consensus algorithm, and miners can be nominees (ie, mine pools), verifiers (miners running full nodes), or sequencers (possibly outsourcing special nodes for tasks that certifiers have not done).

The nodes that verify transactions and create new blocks are specially configured servers with reliable, high-speed network connections and large disk space. At the same time, the nominee does not have to run the node, nor does it have to act as a crowdfunding fund and delegate the deposit to the actual verifier of the running node.

At the beginning, there were only 100 certifiers per month, depending on the amount of GRAM they held. If the TON blockchain subsequently needs more certifiers, the number of verifications can be increased.

Become a certifier to maintain TON blockchain security, in return you can get an annual profit of about 20% of the initial stake token. The white paper stipulates that 10% of the total supply is used to validate the person's stake income, but the percentage can be changed at any time at the agreement level if needed.

According to Dr. Nikolai Durov's hypothesis, TON's annual inflation rate is 2%, and the supply of GRAM can double in 35 years, reaching a total of 10gigagram. Fundamentally, the inflation rate is determined by the cost paid by the community to the verifier to maintain the system's operation.

At the same time, there will be deflation, because invalid certifiers will face fines and their stakes will be burned. A user who finds a "misbehaving" certifier can obtain a portion of the transaction fee that the verifier has not verified.

Coinbase, the US cryptocurrency exchange, is considering putting 17 new tokens on its platform, including Telegram's Gram. 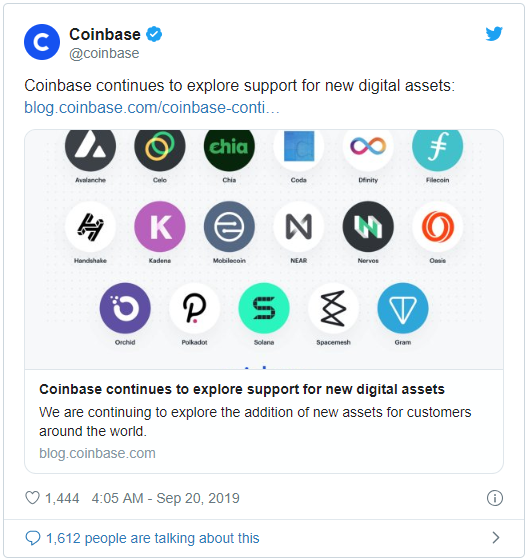 In addition to Gram, alternative currencies include: Avalanche, Celo, Chia, Coda, Dfinity, Filecoin, Handshake, Kadena, Mobilecoin, NEAR, Nervos, Oasis, Orchid, Polkadot, Solana and Spacemesh projects. However, some of the items that Coinbase has designated for the shelves are still not issued. For example, Telegram only released the node software at the beginning of this month, as well as the block browser used to test the network, before fully launching the TON network.

In 2018, Telegram raised more than $1.7 billion through a round of private placements to create a perfect blockchain ecosystem. Perhaps, the introduction of the TON blockchain and GRAM will bring a lot of hype, let TON immediately enter the top 20 market value (only representing the original author's personal opinion) .

This article is from Changelly. The translation is provided by First.VIP_Tracey. Please reprint the information at the end of the article.

Bloomberg: BTC has not rebounded since it fell below the 200-day moving average for the first time since April, indicating a weak market

Expert: Bitcoin is expected to reach 50,000 US dollars, the key factor is the adoption level