On Friday night, the blockchain sector ushered in a major positive. The overseas blockchain concept stocks have taken the lead, and Thunder has soared 107.8%, driving the Chinese stocks to rise.

On the A-share investor interaction platform, there were at least 460 blockchain-related issues in two days. Basically, "Is it involved in the blockchain?" "Will you develop a blockchain?" Both want to know the current blockchain development of listed companies.

As we all know, the so-called concept stocks really do blockchain, but there are only concepts.

Who has the real technology?

Blockchain is a general-purpose technology. In theory, any industry or company can join. Just like the early rise of the Internet, it seems that as long as you build a web page, you can say that it is the concept of the Internet. Now almost all companies have their own websites, but they are not considered to be Internet companies.

But you can refer to the development of the Internet company and see what the rest of the company is doing. In this way, it is possible to distinguish which types of companies in the block field based on the advantages, and finally become a "blockchain company."

Internet companies are currently born in three categories: first, technology companies that provide the foundation of the Internet industry, such as Microsoft, IBM, Cisco, Oracle, etc.; second, the creation of new Internet-based business models, such as Alibaba, Tencent, etc.; It is a company that serves companies or users to participate in the Internet, such as HP, Adobe, 360, etc.

Blockchains have become "value Internet" or similar to the Internet. So in contrast, the first to grow will be the company that provides the basis of the blockchain industry.

The reason why Thunder was sought after by overseas investors last Friday was because Thunder had independent blockchain technology and built infrastructure including Thunderbolt and Thunderchain open platform. This underlying technology is expected to implement the functionality of the OS.

Subdivided, the inter-chain pulse divides the industrial base into infrastructure, basic technology, basic services, and hardware (mine mining, mining) that provides computing power for the blockchain.

The infrastructure is a blockchain system and the bottom of the industry. For example, Ethereum and Bitcoin provide such a system. Thunder chain is also such a system.

Among the A-shares, the interesting chain technology of Xinhu Zhongbao M&A, the shareholding of Yunlong Block of Julong Shares , the Zhongduan Yunan of Weiwei Technology , and the maintenance of 35.43% of China Netan by Hanwei Technology independently developed their own Blockchain system. It is worth noting that Professor Chen Chun, who teaches the blockchain to the national leaders, is the chairman of the Chain Technology.

In addition, although some companies do not develop the underlying foundation, they use the common blockchain technology to establish services such as BaaS\SaaS, and the interlinkage pulse puts them under the name of “basic services”.

For example, according to the 2018 annual report of Hailian Jinhui , its company independently developed the blockchain bottom layer framework excellent chain system, based on the excellent chain system “excellent chain cloud deposit certificate platform” and “blockchain-based cross-border factoring”. The financing credit management platform has been put into operation. The annual report of Huasoft Technology also disclosed that the company has independently developed a “simplified chain” platform using technologies such as blockchain, which can seamlessly link core enterprises and their upstream and downstream asset groups and various types. Financial institutions and other financial parties help the financing of enterprises. Most of these technology platforms use underlying technologies such as the Hyperledger Fabric.

The underlying technology refers to development techniques that have certain aspects of the blockchain, and Rongzhilian, Runhe, and Software currently fall into this category. Shenzhen Great Wall, Shenzhen Science and Technology, and Luyitong are the upstream of the mining industry chain. But blockchain POS and BFT consensus are becoming mainstream, and the days of mining industry are not good.

Based on the comprehensive industrial base, the gold content of blockchain technology is evaluated from the support of the blockchain, technical difficulty and scale of development: infrastructure> basic services> basic technology> mining. 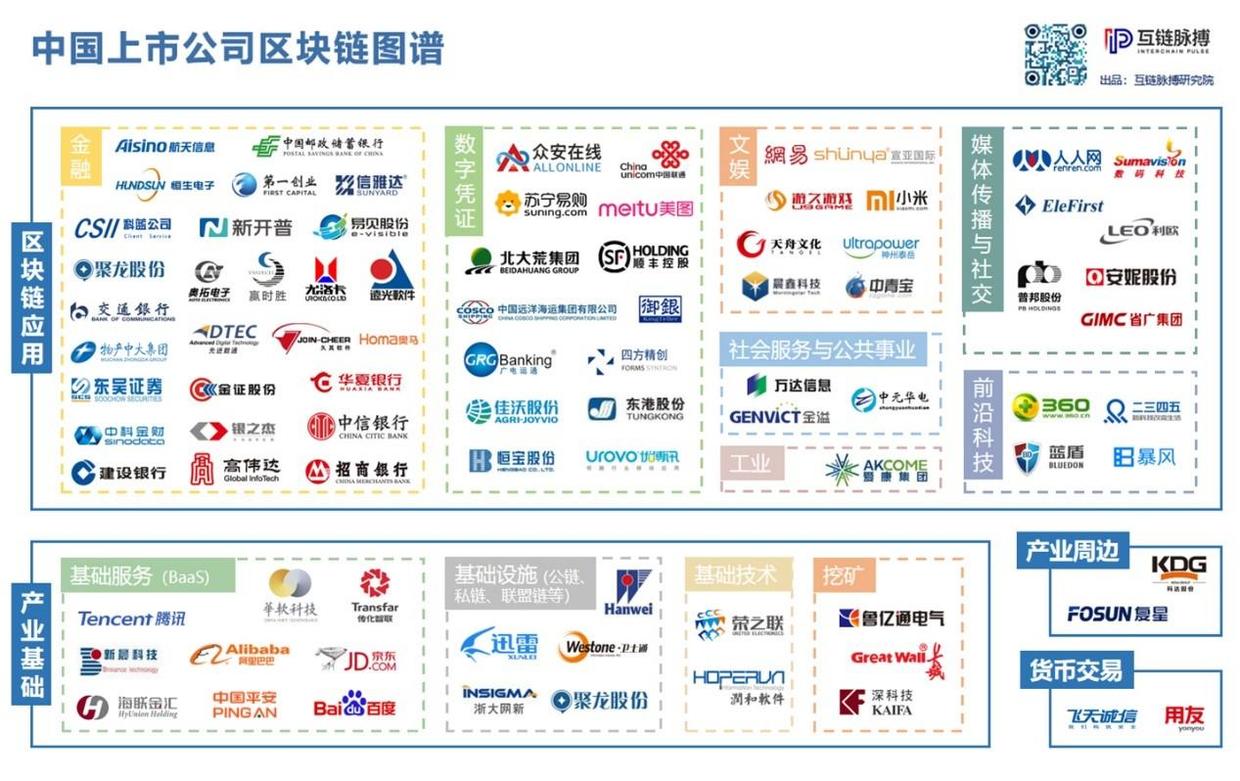 The 65 semi-annual reports mentioned the listed companies in the blockchain. The types of blockchain business were mainly applied to the landing application. There were 25 major development applications in the reporting period, accounting for 38.46% of the total proportion, while claiming to be doing The number of listed companies in the blockchain study accounted for 24.61% (16), accounting for only 36.92% (24).

In terms of application, as mentioned above, finance is still the main area for the development of blockchains among listed companies. Among them, supply chain finance has become the direction of many companies. Hailian Jinhui, Huasoft Technology, China Merchants Bank, China CITIC Bank, and Yuanguang Software are listed in the supply chain finance sector.

In addition to finance, the close trace of the combination with blockchain technology has become another major development direction for listed companies. Xuanya International, SF Holdings, Ping An, and COSCO Haikong are all in the field of traceability.

The semi-annual report of the listed company in 2019 shows that SF Holdings has realized the application of multiple scenarios in the blockchain: traceability of drugs, vaccines and medical and medical devices, cross-border commodities, food and agriculture; and safe “live pig control and traceability” project Based on blockchain technology, 100% full chain traceability is achieved; Xuanya International's chain technology has completed the research and development investment and implementation of Australia's Angus steak, Jilin forestry sheet and other traceability projects.

In addition, there are listed companies in the fields of electronic certificates, electronic bills, medical care, and payment.

Looking at the gold content of blockchain stocks through the annual report: No disclosure of this business revenue is close to 50% staying in research

Blockchain distribution map of 88 listed companies: 70% of the application of the Internet company is good at the underlying foundation

ETC Agharta hard fork will take place in three days, 57.2% of nodes are not ready