Since the second half of 2018, 7nm chips have been mass-produced under the continuous promotion of chip manufacturing processes such as TSMC and other global chip companies.

Almost at the same time, the Bitcoin mining machine with the 7nm chip was put on the market, and its performance has been improved in all directions.

In this context, is the 16nm mine opportunity eliminated? Does the 7nm mining machine have an absolute advantage? Under the impetus of technological advancement, whether it can become a key node for the replacement of bitcoin mining machines in 2019 has become a problem that the majority of miners must consider.

Since the second half of 2018, domestic and foreign mining machine manufacturers such as GMO, Bit China, and Jianan Zhizhi have successively launched 7nm mining machines. Chen Nan, director of the mining machine market of Jia Nan Zhi Zhi, even publicly stated that the company is already laying out 5nm chips.

From the data published by several manufacturers, the new generation of mining machines has been greatly optimized and improved in terms of performance and power consumption.

Taking the first-generation 7nm mining machine S15 of Bitland as an example, the energy efficiency ratio of the mining machine is 57J/T, which is 50% lower than that of the S9 mining machine 100J/T. This means that the S15 miner can save at least 50% in power consumption when one bitcoin is dug at the same time.

The energy efficiency ratio is the energy consumed to generate 1T computing power per unit time.

In the mining industry where “the electricity is as good as life”, such efficiency improvement is of great importance.

At the same time, the 7nm mining machine itself is also being upgraded. In this respect, Bitian is in front of Jianan Zhizhi and Japan GMO.

In April of this year, Bitcoin launched its second generation 7nm mining machine S17. According to the official website of Bitcoin, the ant mining machine S17Pro is equipped with the second generation 7nm chip BM1397 of Bitland. The power in the standard mode is up to 53TH/s, the energy efficiency ratio is 39.5 J/T, and the energy efficiency ratio is as low as 36J/T in low power mode. .

The power consumption of the second generation chip is again greatly reduced.

According to information from the official website of Bitcoin, the S17 mining machine was sold out within 5 minutes once it was launched in April this year.

Many powerful manufacturers have successively launched the latest model of mining machines, and it seems that the 7nm market is a foregone conclusion.

Then, do these 7nm mining machines, which seem to have strong performance and make great progress in energy efficiency ratio, really win the miners' "heart", help the mining products to be replaced, and successfully replace the previous generation 16nm mining machine?

Whether the 7nm mining machine is in full swing, will it really come.

Can the 7nm mining machine take the miners' heart?

"The only factor that determines whether the miners are renewing the mine is the input-output ratio. If the machine has high computing power, low power consumption, and the price is affordable enough, the miners have the power to replace the mining machine." Lin Hai said.

Lin Hai is a veteran bitcoin miner. At present, his mine mainly runs the ant S9 of Bitian. He has his own opinion as to whether the mine is really at the time of the replacement of the mining machine.

In Lin Hai’s view, it is only enough to benefit the new miners to attract miners. So, is the 7nm mining machine affordable enough?

F2pool's latest data shows that the current S9 mining machine is still in a profitable state with an integrated electricity bill of 0.45 yuan. The current currency price is also much higher than the S9's shutdown currency price. 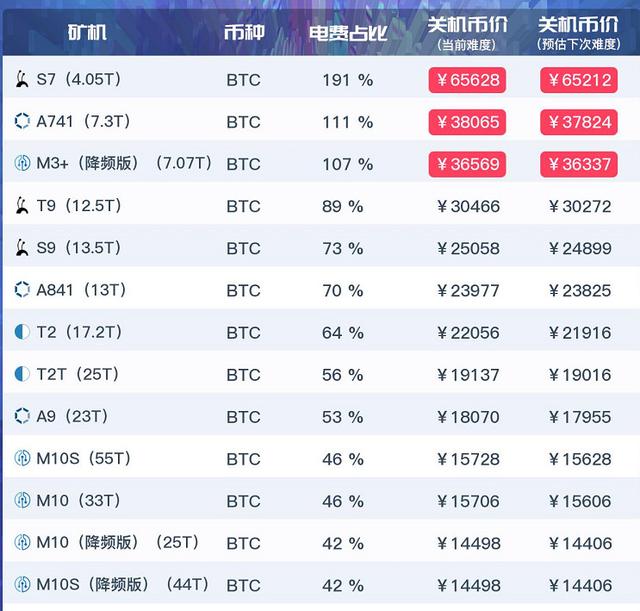 On the other hand, the price of the 7nm mining machine will also completely "dead" Lin Hai.

"Now a S17 is priced at 15,000 yuan. At present, under the mining, the old mining machine has an advantage," Lin Hai said. "Now a second-hand S9 is only priced at around 1,000 yuan, and the daily net profit is also 3 There are many blocks. If the price of the currency rises again, the profitability will be better if the difficulty of mining is not increasing." 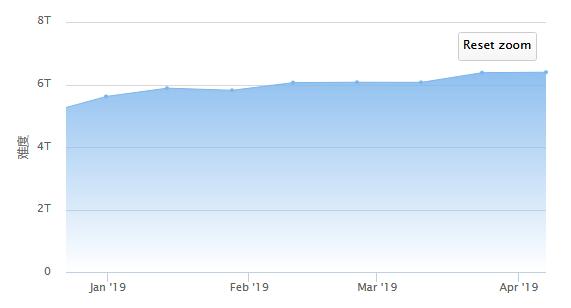 The difficulty of mining increased by 14.1%, but the price of bitcoin rose by more than 60%.

So, is it possible for the new mining machine to “win” the miners’ attention through price cuts?

"Actually, the current 7nm mining machine price is difficult to lower, because this special mining machine chip from design to application, to the design and testing of the entire mining machine, and then to the market, it will cost a lot of money, the cost recovery is definitely not Things that happen overnight." Lin Hai told 31QU.

Although there is no way to learn about the research and development costs of the ant S17 of Bitian and the Avalon A9 of Jianan Zhizhi, the 7nm mining machine designed and manufactured by GMO of Japan costs 10 billion yen (equivalent to RMB 650 million). The 7nm mining machine development costs of the two companies in the mainland and Jianan Zhizhi should also be in the hundreds of millions.

At the same time, we contacted the head of the marketing department of a mining company, and confirmed from other places, the current scheduled shipments of 7nm mining machines are generally not the focus of sales of these companies.

It seems that 7nm wants to draw miners "hearts", there is still a long way to go ahead.

"The 16nm mining machine itself is facing competition problems from generation to generation." Lin Hai said.

Under normal circumstances, when there is competition in the next generation, the more advanced mining machine can thoroughly crush the old mining machine, and then promote the upgrading of the entire mining industry.

Taking the 16nm mining machine as an example, after the appearance of this type of mining machine represented by ant S9, the performance and price are better than S1 using 55nm chip. Under the same circumstances, the mining capacity of S9 is 22.5 times that of S1. In terms of selling price, when the ants went live in December 2013, the price was as high as 22,000 yuan. When the S9 was launched in June 2016, the price was only 14,000 yuan.

It can be seen from the past data that whether it is the energy efficiency of the mining machine or the price, the S9 and S1 two-generation mineralizers have a crushing advantage.

So, can this kind of intergenerational advantage still appear on the S9 and S17 mining machines?

"At present, although the S17 pro uses a 7nm chip, the S9 uses a 16nm chip, there is a generation difference between the mining machines, but it does not show the advantages of S9 and S1." Lin Hai said.

The energy efficiency ratio of ant S17 pro is twice that of ant S9, and it has not reached the huge gap between S9 and S1.

“Actually, if S9 turns on BOOST overclocking, the energy efficiency ratio can be increased to 70J/T.” Lin Hai said, “After turning on this function, S9 performance will go further.”

The reason for this is that some technical experts believe that this is because semiconductors are still based on silicon, which leads to the chip process may have reached the end of Moore's Law, which has already been in 14/16nm technology. When it was launched, it already had a clue.

Moore's Law was proposed by Gordon Moore, one of Intel's founders. The content is: When the price is the same, the number of components that can be accommodated on the integrated circuit will be doubled every 18-24 months, and the performance will be doubled. In other words, the performance of computers that can be bought for every dollar will more than double every 18-24 months. This law reveals the speed of advances in information technology. Although this trend has been going on for more than half a century, Moore's Law should still be considered observation or speculation, not a physical or natural law. The law is expected to continue until at least 2015 or 2020. However, the updated growth of the international semiconductor technology roadmap in 2010 has slowed down at the end of 2013, and the transistor density is expected to double every three years.

That is to say, as the nanotechnology of the chip progresses, the product does not produce as fast a performance improvement as before.

From this perspective, the ant S9 mining machine can compete for generations.

That being the case, why are so many manufacturers pushing the 7nm mining machine so aggressively, what are their intentions? Is it a market push or an arms race?

Is the 7nm mining machine an arms race or a market push?

The meaning of numbers such as 10nm and 7nm: The chip is composed of transistors distributed on the crystal silicon, and nm represents the minimum spacing between two adjacent transistors. The smaller the number, the more transistors can be plugged under the same volume. The better the performance of the chip.

“The upgrade of the mining machine is actually driven by technological advancement.” Lin Hai said, “It is normal for mining machine manufacturers to occupy a place in the 7nm era.”

At the same time, the computing power of Bitcoin is increasing, and the difficulty of mining is increasing day by day. However, the price of bitcoin has not increased simultaneously. The miners are also expecting mines with higher energy efficiency and more affordable prices to reduce Mining cost.

Since the second half of 2018, bitcoin prices have fallen by more than 50%. At the same time, the mining power has also undergone tremendous changes. A large number of ants, such as S9 and T9, are close to shutting down or struggling at a certain point in time.

"That big fall, if S9 is not overclocking, it has already been hung up." Lin Hai said, "That is, although the S9 mainstream miners still have the ability to make profits, they still occupy a large share of the mining machine market, but It is also time for the update."

It seems that the new model of mining machine is not only the product of the mining machine manufacturer "arms race", but also the result of market promotion.

In any case, if the 7nm mining machine wants to attract the attention of the miners, instead of the S9 and other mining machines, it will take a long way to go to become the darling of the mining circle.

The process of upgrading the mining machine can never be determined by a single factor.

Bitcoin's "roller coaster" plot is hard to stop the trend, and the seven major indicators indicate that the bull market has officially returned.