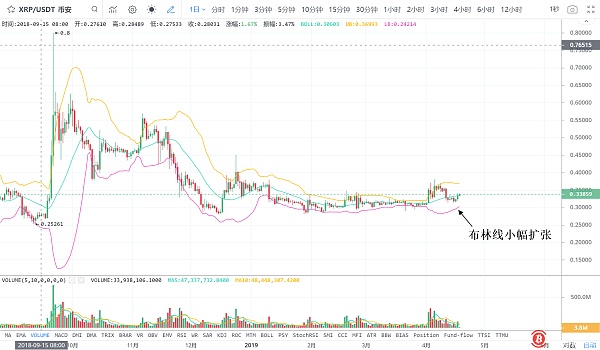 In the X-ray's daily K-line, the early price rebounded and the Bollinger Band expanded. In the short-term, the K-line, which has risen for three consecutive days on the K-line, is about to be completed, meaning that the typical bullish signal is being confirmed. In the XRP rebound trend starting at 21:00 yesterday, the price rose by 5% in half an hour, and the transaction rose in the top of the big-capital currency. The market expects the XRP to make up. Due to the rapid rise of XRP in history, bullish investors can lay out when prices have not yet started. Once the market driven by quantitative trading appears, the difficulty of chasing will soon increase.

According to Forbes, Foxconn and P2P lenders, the company "Chained Finance" established in Shanghai, will establish a network platform based on Ethereum, aimed at Foxconn and its suppliers (including suppliers of downstream suppliers). ) Connect, use their tokens and smart contracts to make payments, and provide real-time financing to simplify tedious paperwork.

Since the decline of ICO in Ethereum, no new breakthroughs have been found, and its advantages have not been vented. Investors have not seen the hope of rising prices. The combination of Foxconn has undoubtedly confirmed the foundation for the return of the Ethereum to the bull market.

In addition, the bond fund issued by a US start-up company is applying for it at Ethereum, which is also a major positive factor for Ethereum.

According to Coindesk, Arca Investment Management, a startup in Los Angeles, is applying to regulators to sell token-issued funds to retail investors, one of which will be issued on the Ethereum blockchain in tokens. 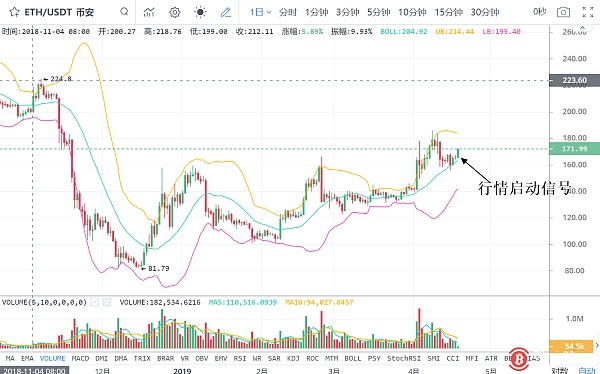 The rising pace of ETH is confirming, and in the short-term, the price is easily supported after breaking through $160. Judging from the linkage with BTC, ETH's increase on April 2 is not high, but the breakthrough and completion of the price of 160 US dollars. It is believed that after the Bollinger Band continues to expand, the potential for price increases will soon be released. After all, after the ETH rose sharply at the end of 2018, the increase has been limited this year.

In terms of issuing bonds, Ethereum has benefited from the blockchain bond issue, while Bitcoin has issued BTC bonds directly.

According to bitcoinist news, according to the latest statement at the World Bank and International Monetary Fund (IMF) spring meeting in Washington this week. Afghanistan, Tunisia and Uzbekistan are currently considering the possibility of bitcoin bonds, all of which are interested in the tool's ability to help the potential of key economic sectors.

If the bond is issued, the demand for BTC will undoubtedly increase. If more bonds are issued by BTC, it is undoubtedly a very good factor for the expansion of BTC market value.

In terms of price, the adjustment of the BTC at the weekly level is so small that the adjustment was completed only with the cross star shock. It can be seen that the performance of BTC is very strong, which has helped to further expand the increase.

Considering the factors of investors' chasing emotions and the possible frequent over-weighting of quantitative transactions, BTC's 17% increase on April 2 may not be a ceiling increase, expecting a higher single-day gain. (CoinNess)

Analysis: The main personality traits of cryptocurrency leaders such as V God are intelligence, liberalism, and caution