Author: in this stupid thirty-one

On October 29th, a photo of Jianan Zhizhi’s executives on Nasdaq went away. At one time, the public opinion was stunned. They thought that Jianan Zhizhi had successfully landed in the US stock market, even though it was discovered through deep-chain financial exploration. For Jianan Zhizhi executives to visit Nasdaq in August, it has not yet officially listed. 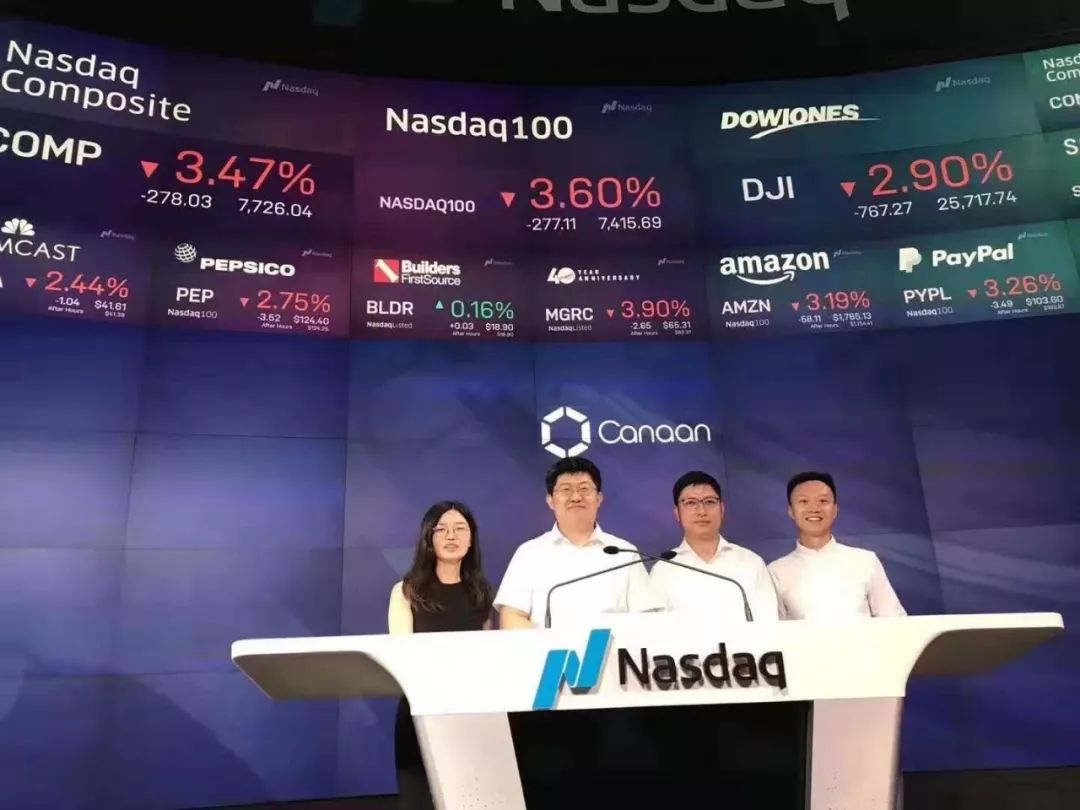 According to US stock sources, it is almost a foregone conclusion.

Just the day before, Jia Nan Yu Zhi officially submitted a prospectus to Nasdaq. Credit Suisse, Citibank, Huaxing Capital Holdings and CMB International jointly guarantee. With the stock code CAN listed on NASDAQ, it plans to raise US$400 million, which is a significant reduction from the 1 billion fundraising amount that was previously promoted by IPOs in Hong Kong.

The company, which was established in 2013, has not been aware of it for six years. As the upcoming "block stock first stock", Jia Nan Zhi Zhi in the end, why can it be successfully listed? 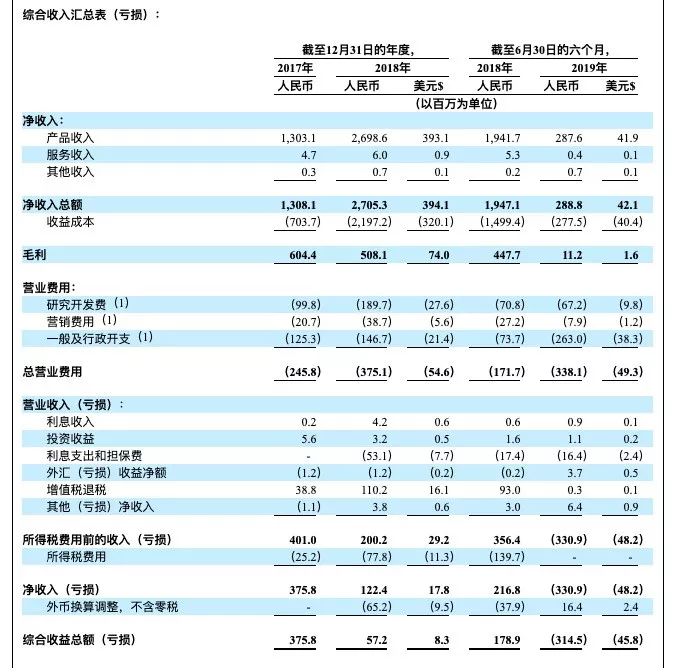 In the first half of 2019, the revenue of Jianan Minzhi Mining Machinery was 287 million yuan, the vast majority of which came from the A8 series.

However, it is worth noting that Jianan Zhizhi AI products only earned 500,000 yuan in the first half of 2019. As a comparison, the income of AI products in the second half of 2018 was 300,000 yuan. Prior to this, Jia Nan Zhizhi's AI products have never had income. Compared with last year's achievements, Jianan Zhizhi's financial report this year is slightly "dismal." Despite the influence of the market environment, the mining company's financial report this year is not satisfactory. However, for Jia Nan Zhi Zhi, on the one hand, his own AI business did not produce a satisfactory answer, on the other hand, the newly rising mining company Shenma mining machine is closely following.

For Jianan Zhizhi, although the successful listing is indeed a major positive news, in the future development process, it still cannot be taken lightly.

2 " Liu Xiangfu is no longer the largest shareholder "

According to reports, in April 2015, Kong Jianping passed the core investment, Sun Qifeng invested in Jia Nan Zhi Zhi through Peter Tiel, and the former major shareholder Liu Xiangfu held 10.2% of the shares through Urkanall Ltd., compared with the previous offer. The 17.6% disclosed in the book has dropped sharply and is no longer the largest shareholder of Jianan Zhizhi.

In addition, the shareholding entities include five companies and individuals including Ouroboros Ltd and Flueqel Ltd.

Compared with the over-concentration of Bitcoin shares, Jianan’s share allocation appears to be relatively “balanced”.

However, it is worth noting that Liu Xiangfu, who was one of the actual controllers of Jianan Zhizhi, also had the most shareholdings in the management position earlier this year. The specific reason is that Liu Xiangfu and the company's overall strategic development are divided. .

Despite this, in comparison with the fascinating "Palace of the Palace" in the Bitumn, Jia Nan Zhizhi is much more understated in the process of dealing with contradictions.

3 " Challenging risk challenges such as bitcoin ups and downs "

According to the prospectus, Jia Nan Zhizhi listed the bitcoin price as the first risk factor.

"Our results of operations have been and are expected to continue to be negatively impacted by sharp Bitcoin price decreases."

It can also be seen from the change in profits that bitcoin prices hold the fate of major mining machine manufacturers, and the symbiotic properties are obvious. Due to the need for power consumption, the cost of mining is also affected by the dry and wet periods of hydropower.

According to previous reports, Jianan Zhizhi's profits in 2015 and 2016 were 1.511 million yuan and 52.544 million yuan respectively. It can be seen that the price trend of Bitcoin has a great influence on Jianan's business.

In addition to bitcoin prices, the mining machine market is near saturation, growth is slow, and mining is difficult. Less and less bitcoin that has not been dug in the mining pool will eventually lead to a decline in future mining machine sales. These problems also need to be carefully considered by Jia Nan. In addition, in terms of AI applications, Jianan is worried that it will not be successful from the AI ​​market, or it will cause income, growth prospects and financial situation to be affected.

Therefore, the accumulation of long-term experience has accumulated a great advantage in the technology of Jia Nan.

Not only that, but Jia Nan’s achievements in the research of ASIC technology are not small.

Up to now, Jianan Zhizhi's K210 edge chip has been used in the Internet of Things, such as smart home, smart driving, and medical and education industries.

However, some insiders said that they are not optimistic about the transformation of Jia Nan Zhi Zhi.

The ASIC chip used in the mining machine is a customized chip for a specific field. The chip structure is relatively simple, and the computing power and calculation efficiency are directly customized according to the needs of specific algorithms. The AI ​​chip requires massive calculation, high flexibility and high efficiency. Data interaction efficiency, etc.

According to the prospectus, in 2018, Jia Nan Zhi Zhi signed a number of short-term loan agreements with a number of banks, totaling RMB 500 million.

As early as 1 year ago, Jia Nan Zhi Zhi received nearly 300 million yuan in financing from Ping Pu Investment, Jin Jiang Group and Yan Capital. At that time, the valuation was close to 3.3 billion yuan.

Through the large investment in chips, mining machines and other aspects, although Jia Nan has a distance from the Bitumn in the field of mining machines, it still has good results.

At present, the bitcoin mining machine sold by Jianan Zhizhi has occupied 21.9% of the total sales of the mined machine in the global market, which is a significant increase from the 15.3% in the same period last year.

However, Jianan Zhizhi’s market share in the shipment of Bitcoin mining machines was 23.3%, which is still far from the market share of Bitcoin’s 64.5%.

On the chip side, in September 2018, Jia Nan was recognized as the first commercial edge computing artificial intelligence chip company in the industry to provide a neural network accelerator based on the Risc-V architecture and self-developed.

In terms of personnel composition, up to now, Jia Nan has all 286 staff members, of which 127 are responsible for research and development, accounting for 44.4%.

A week before Jia Nan’s announcement of the prospectus, Bit China had secretly submitted a listing application to the SEC, and the sponsor was Deutsche Bank. In addition, as early as June this year, Yibang International also reported the news that it will go public in the United States.

Why did the three giants of the mining industry in the Hong Kong Stock Exchange have gathered in the US stock market?

Wall Street has always been the capital of Internet companies, compared to the listing of A shares and Hong Kong stocks, listed in the United States, the threshold is lower.

Because the United States adopts a registration and filing system, as long as the information is submitted in accordance with the requirements of the SEC, the application for filing can be listed without any human factors.

Secondly, in June 2017, in order to activate the US IPO market, under the leadership of the current Securities and Exchange Commission Chairman Jay Clayton appointed by Trump, the policy of secretly submitting an IPO application file. It has been relaxed to all companies that are ready to go public.

This also means that all companies preparing to go public in the US can choose to submit an initial public offering application file.

The benefits of secretly submitting the first prospectus are:

First, the number of years required to submit an audited financial statement has changed from the last three years to two years.
Secondly, the number of shareholders before the listing has been extended from 500 to 2,000, and the number of “unqualified” investors has been relaxed to 500, making it difficult to change the stock before the listing.
In addition, after the s-1 form is submitted, the information will only be disclosed to the US Securities Regulatory Commission and specific investors. The public will not be seen until three weeks before the road show. This will protect the business information of the listed company. Under the premise that the public understands their financial situation, they will make an inquiry to the major investors and decide whether to go public after testing the water.
Finally, from the constraints of SOX 404b, it is not necessary to establish internal control according to SOX before listing, and establish internal control after listing.

According to informed sources on Wall Street, Jia Nan Zhizhi secretly submitted a prospectus to the SEC a few months ago, and passed several rounds of questions and answers from the SEC, after which the prospectus was published.

In the end, Jia Nan’s business is relatively “simple” and has not been associated with too much cryptocurrency. It has always been a legal currency system. The financial system is relatively simple and more easily recognized by the traditional capital market.

Founded in 2013 and listed in 2019, Jia Nan Zhizhi, who was born in the cryptocurrency market, seems to be making a positive result. But for a company, a company that represents the cryptocurrency and blockchain industries, listing is only the first step. The next road is still very long.

Foreign media: MoneyGram will use Ripple's Interledger protocol to settle other digital currencies other than XRP