Editor's Note: The original title is "The distribution of Bitcoin is fair"

The copyright of this article belongs to the original author, only represents the author's own point of view, does not represent the views or positions of the credit letter or the credit research institute.

This article is about 3,600 words, and it takes about 8 minutes to read the full text.

With the popularity of Bitcoin and continuing to challenge mainstream thinking, people will be concerned about certain parameters (https://medium.com/@danhedl/pow-is-efficient-aa3d442754d3). One of them is that the allocation of bitcoin is not “fair”, especially in the early stages of network development. I will delve into the timeline for the issuance of bitcoins and completely refute the notion that early issuance is unfair.

Too long to read the version – Nakamoto has designed the most fair system possible.

Premining refers to digging or creating a large number of such cryptocurrencies before introducing certain cryptocurrencies to the public. Because private developers can dig privately before releasing the open source code for the currency to the public and allocate some coins to themselves, pre-digging sometimes has a negative meaning. This may lead people to feel the lack of transparency in this digital currency offered to the public.

Nakamoto did not pre-dig. Before the creation of the world, Nakamoto gave everyone two months to contact the other people who might be interested in trying a non-sovereign digital currency at the time – cyberpunks (via public email list) ). The white paper was released on October 31, 2008, and the Bitcoin 0.1 software was released on January 9, 2009.

The Genesis block was dug up earlier on January 3, 2009. Unlike all other blocks (the last block that can't be referenced), it requires custom code to dig out. Nakamoto bought a piece of information in the Genesis block as "no pre-drill proof."

"The Times" On January 3, 2009, the Chancellor of the Exchequer is about to make a second round of bailouts for banks.

The timestamp of the subsequent block indicates that Nakamoto did not attempt to dig all the early blocks. Before the invention of Nakamoto, the concept of pre-excavation did not exist. Such a foresight shows an incredible maturity.

On the day when Nakamoto started mining, except for special-purpose creation blocks, Bitcoin mining code can be used. It can even mine with one button, so it's very easy. After the code was released, several people started mining – we know that Hal Finney was mining after the first release. Despite the small number of participants, in the early days, Nakamoto was definitely not alone in mining.

In the first year of Bitcoin's birth, Nakamoto and other miners couldn't get enough computing power to dig up more than 144 blocks every day and trigger an upward difficulty adjustment. Nakamoto’s mining is because the network needs a miner, and when the stable network no longer needs his calculations, he shuts it down. He reduced his power in a slow and steady way. The mining with Nakamoto's fingerprints carefully balanced the computing power of the cluster in order to achieve the goodwill of history. Nakamoto first followed the plan to reduce his computing power by 1.7 Mhps every five months, but in the month after the second reduction, he gave up on this method and turned to lower computing power. 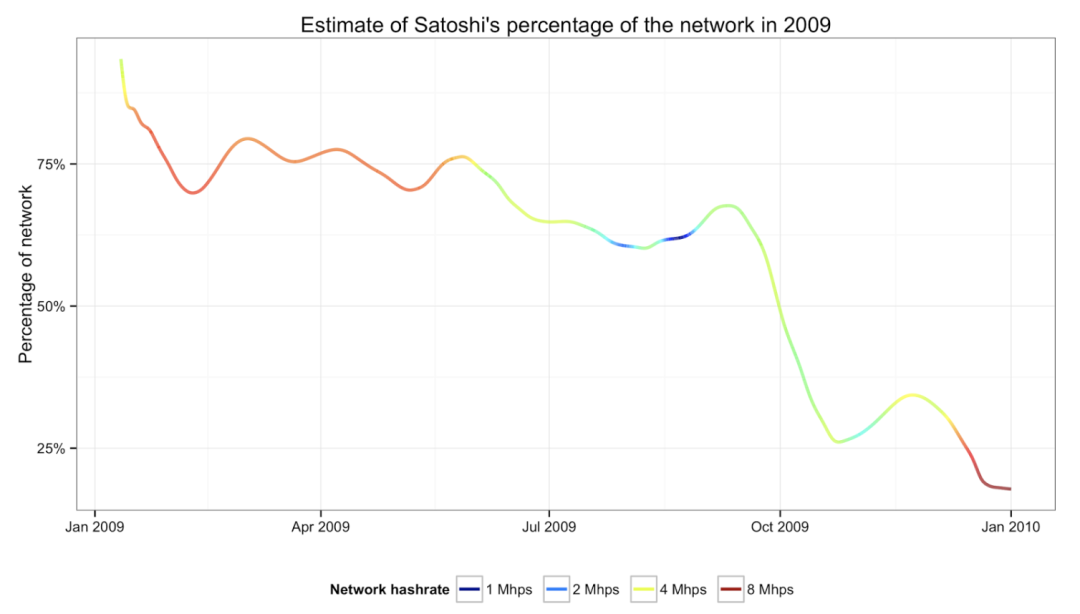 How many coins did Nakamoto scramble? Except for a few coins (some are still in circulation, https://bitcointalk.org/index.php?topic=548508.0), there is no way to empirically know how much currency he has, but we can think that he is probably the one who digs A miner with about 700,000 coins. BitMEX commented on Sergio Demian Lerner's original estimate , where he found that Nakamoto's mining tools have "fingerprints" (the increase in ExtraNonce values ​​in the block can be used to link different blocks to the same miner). Based on his analysis, BitMEX concluded that although this evidence is far less powerful than many have imagined, there is reasonable evidence that a leading miner could produce about 700,000 bitcoins in 2009.

“Although there is strong evidence that there was a leading miner in 2009, we believe that this evidence is far less powerful than many people think. Even though a picture tops a thousand words (https://bitcointalk.org/index .php?topic=178629.0;all), but sometimes the image may be misleading. Even if someone is convinced, in our opinion, the evidence can only support the claim that the dominant miner produces far less than one million bitcoin. Maybe 60 10,000 to 700,000 bitcoin is a better estimate." – BitMEX

The market value of Bitcoin is about $0 in nearly a year and a half. Miners spend money on hardware and electricity to mine, and there is no guarantee that the bitcoin they receive will be valuable. In fact, the “faucet” was set up to distribute Bitcoin for free as a “seed” (for example, 10,000 BTC faucets set up by Bitcoin players with Canadian and other donated funds). The first recorded value exchange between Bitcoin and the "real world" took place on May 22, 2010, the current "Bitcoin Pizza Day", Laszlo Hanyecz agreed to pay 10,000 bitcoins to buy two courier sticks John Pizza. He continued to do this twice to maximize his spread of bitcoin.

"Buy some may make sense, just in case. If enough people think in the same way, it will become a self-fulfilling prophecy." – Nakamoto Satoshi

Early pioneers were crazy enough to take financial risks, time risks and social risks to participate in the Bitcoin project, keep it alive and act as a system arbitrator early on. Analysis by Dhruv Bansal proves that almost everyone has lost or sold all of their bitcoins.

In each boom/bust cycle, we can see that Bitcoin has been reduced by the redistribution from the old coin to the new coin, thus reducing the Gini coefficient. In 2017 alone, we saw that 15% of all BTCs left the old coins.

“A decade ago, cryptographers and human-computer interaction experts created an ultimate experiment to understand how humans behave in keeping long-term keys. We structured the experiments and if the participants failed, they would lose hundreds. Or thousands of dollars. The results of this experiment are not very good." – Some cryptographers on Twitter

There are a lot of reports about people losing a lot of bitcoin, especially in the early days when Bitcoin was not worth the money, it was easy to forget them on old hard drives, USB flash drives, and even a piece of paper. Unused coins for more than 5 years are likely to have been lost forever. Despite the rich blockchain data, it is extremely difficult to measure how much cryptocurrency is actually lost, because the lost coins have no traces in the blockchain. The problem is that so many bitcoins that are not lost look exactly the same on the blockchain.

“Researching lost bitcoin is a geology that disguised as data science.” — Dhruv Bansal

“The lost currency will only slightly increase the value of other people’s currency. Think of it as a donation to everyone.” —Zhong Bencong

From the private key management mistakes to the scams and hacking of the exchanges, to the temptation to resist the sale of coins, the early coins survived. In order to compensate for this risk, they are definitely worth adding value.

Some people think that the allocation of bitcoin is similar to the Ponzi scheme, but it is totally different. The definition of Ponzi scheme is:

“A fraudulent investment scam that guarantees a high rate of return and is of little risk to investors. Ponzi schemes reward new investors by acquiring new investors.”

Bitcoin is not a Ponzi scheme, for the following reasons:

There is absolutely no secret about Bitcoin. It's open source, anyone can view the code, anyone can contribute code, anyone can voluntarily run the software and participate in the network, and anyone can use the network without permission. Anyone in the world can see the entire history of all Bitcoin transactions. This is in stark contrast to fraudulent investment scams, which are shrouded in vague promises of high returns, and deposits and withdrawals are kept in a secret account book.

The Bitcoin white paper never mentions investment or considerable high returns. In the Ponzi scheme, the value of the early investors is entirely dependent on the new participants entering the market with new capital, and their earnings/dividends come directly from the capital. For Bitcoin, the opposite is true. The earliest Bitcoin players lost or sold their bitcoins. Bitcoin players are people, they make mistakes and some people need (buy a house).

“Bitcoin has no dividends or potential future dividends, so it is not like stocks. It is more like a collectible or commodity.” – Nakamoto Satoshi

The market's determination of how much a bitcoin value is related to a larger fool entering the system, but the result of its true value proposition, even if it is worthless, already has a real value proposition.

Nakamoto is a person like everyone else, not something that is always right. Considering what / timing/audience he is constructing, this is the fairest distribution he can draw. Comparing Nakamoto’s early loss of bitcoin and an ICO with pre-excavation at a positive market value (or expected positive market value) is intellectually dishonest.

“Bitcoin benefits from an extremely rare situation. Because it is released in a world where digital cash has no established value, they are freely circulated. This cannot be reproduced today because everyone wants the currency to be valuable. It is not only Fair, and its fairness is unique in history. Perfect idea." – Nick Carter

Nakamoto wants to show everyone that bitcoin is not a scam. His mining contribution has been gradually reduced. He left the community, never spent any of his coins, and did not use his influence for any purpose. He indicated that he hoped the world would make his own decisions on his project, and Judging it according to its own claims.

Unlike other founders in history, Nakamoto has never cashed in.

8 asked videos | Conflux Long Fan: Only by reducing the interaction cost with the public chain will there be more applications

Data show that the height of BTC's subsequent rebound depends on whether the all-around station stands above the 60-day moving average today.