On the evening of last Friday, a Xinhua News Agency detonated the entire blockchain industry. General Secretary Xi Jinping said in the collective study of the political chain blockchain of the CPC Central Committee that the blockchain should be regarded as an important breakthrough for independent innovation of core technologies.
The clear support of the highest decision-making level in the industry direction began a general transmission in the capital markets in the next few days. After the bitcoin rose 40% on the night, and the stocks in the blockchain listed by US stocks such as XNET.O rose sharply, today's A-share blockchain concept company also swelled.
According to the data of the think tank and the East Fortune Network, as of the close of the 28th, there were 106 daily limit of 172 stocks in the blockchain sector. The actual number of "蹭" blockchains in the actual "蹭" block has a higher number of daily limit.
With so many blockchain concept companies, how to identify them requires an important reference for investors. The research on the blockchain layout of listed companies is the focus of the think tank.
In June last year, the power think tank was researched, and the authoritative financial media such as Babbitt Think Tank, Huashang Daily, and Money Weekly, Pacific Securities Research Institute and blockchain frontier technical experts released the "2018 "blockchain +" listed company research report" For the first time, based on the dimensions of listed companies, we will observe the application scenarios, application cases and development trends of traditional industries and blockchain technologies from the perspective of China's best corporate groups.
The "Report" lists 21 companies, mainly in the five major industries of finance, medical health, intellectual property, "blockchain +" innovation, and underlying technology.
In the financial field, the "Report" selected Hang Seng Electronics (600570.sh), Zhongan Online (06060.hk), Sifang Jingchuang (300468.sz), and Agricultural Bank (601288.sh) as typical cases;
In the field of medical health, Alibaba (BABA.N), Tencent (00700.hk), and Huada Gene (300676.sz) were selected.
In the field of intellectual property, we selected Vision China (000681.sz), Anne (002235.sz), and Kodak (600986.sh).
In the “blockchain+” innovation industry, Jianan Zhizhi, 2345 (002195.sz), Thunder (XNET.O), and Beidahuang (600598.sh) were selected.
This report is still a reference for reading today. Over a year of development, some of these companies have left the scene, and some rookies have turned out. In general, the integration of blockchain technology and business of listed companies is deepening.
What are the “authentic” blockchain concept stocks?
Whether there is actual involvement in the blockchain business, perhaps the transcript of the listing of the listed companies in the two batches of blockchain information service filings issued by the National Internet Information Office (referred to as the “Internet Information Office”) is as follows: 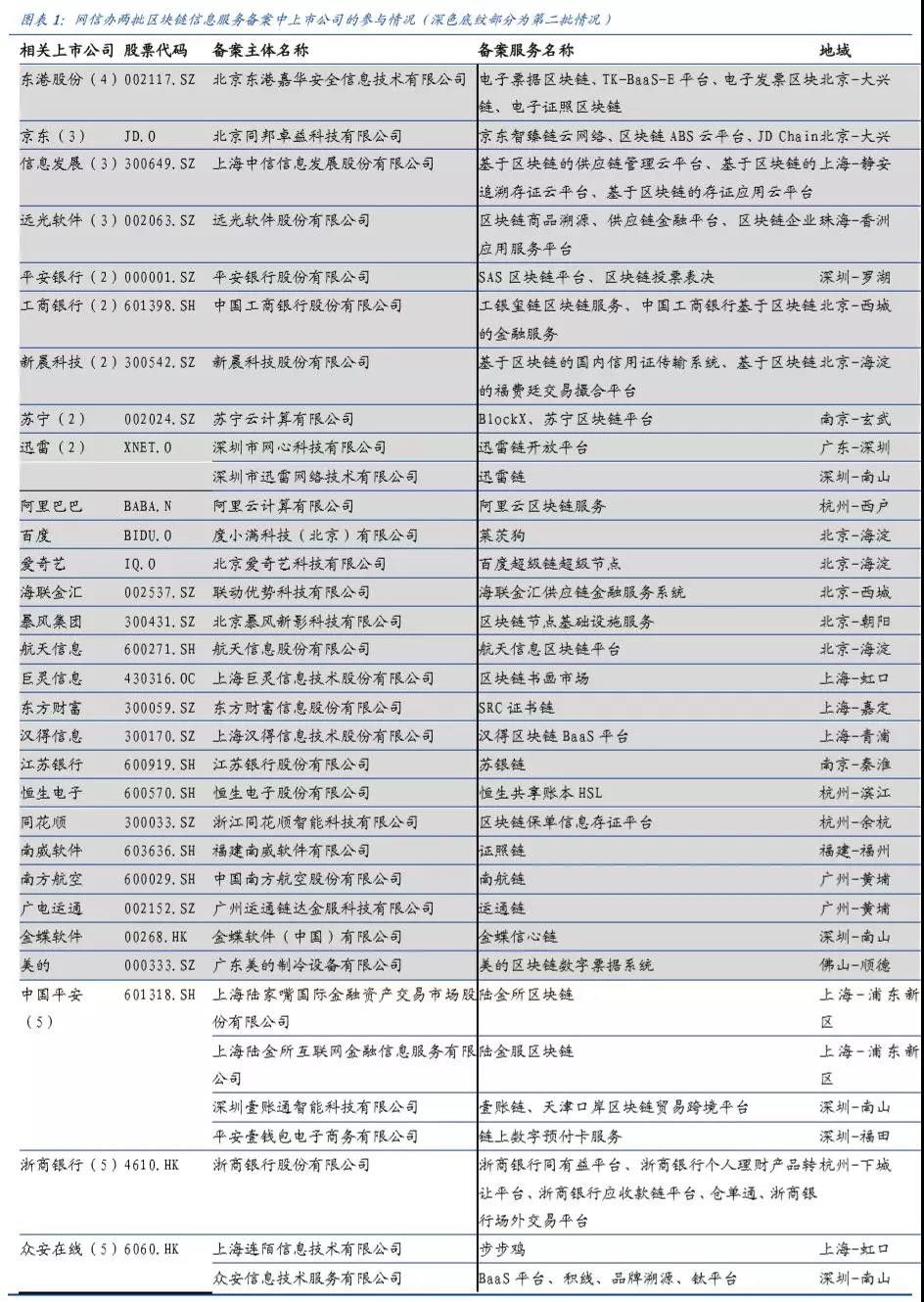 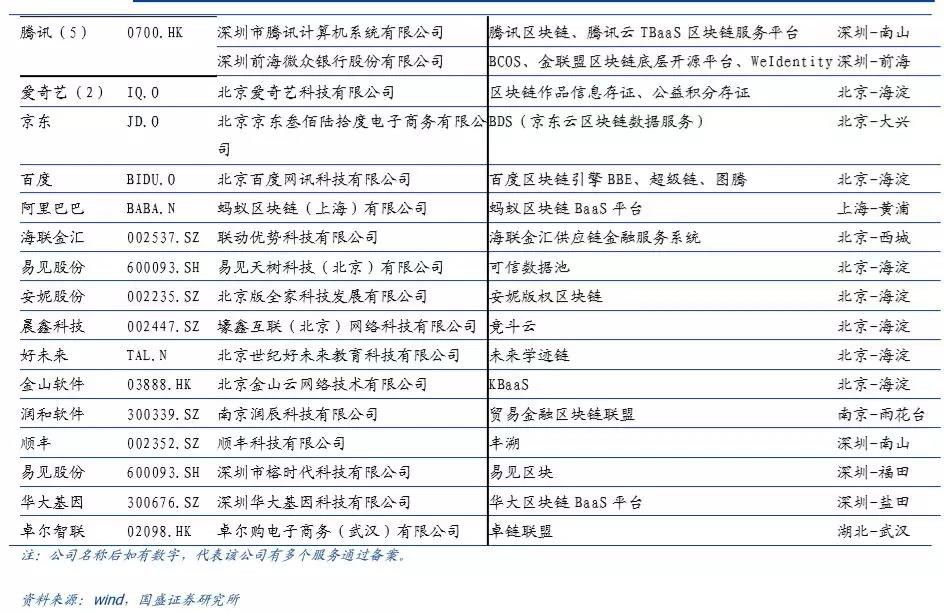 It can be found that the capital market listed companies' technology advancement in the fields of finance, deposit certificates, traceability, public chain and alliance chain is expanding compared with 2018 , among which BAT, Jingdong, Suning and other e-commerce and Internet giants are making The underlying blockchain service platform, especially Alibaba's Ant Financial Service, has become the company with the largest number of patent applications in the blockchain worldwide.
Enterprises represented by iQI (IQ.O), Good Future (TAL.N), Chenxin Technology (002447.sz), Anne (002235.sz), and Huada Gene (300676.sz) will The blockchain technology is combined with its own business to develop supporting services, and continue to apply the blockchain application scenarios in the areas of deposit certificates, games, education, medical care, and finance .
Some experts said that this blockchain fever is not just a plate rotation, the essence is still the continuation of competition in the scientific and technological fields such as artificial intelligence in the Sino-US trade war.
As the vanguard under the Sino-US science and technology trade war, Huawei has not fallen behind in this blockchain competition. Huawei Cloud BU President once announced the "Huawei Blockchain White Paper" at the Huawei Global Analyst Conference, officially announced to the outside world the determination and planning to enter the blockchain field.
In its report, Huawei said that the global blockchain space compound annual growth rate is 72.3%, and there will be an industrial growth inflection point in 2019. The next three years will be the key to the success of blockchain technology. Standards and projects will determine whether technology can be converted to commercial use.
In today's A-shares, Huawei's concept-related stocks also have many daily limit, such as Zhejiang Furun (600070.sh), Runhe Software (300339.sz), Xinchen Technology (300542.sz) and so on.

Today's daily limit of Huawei stocks, source: Eastern wealth
"One integration + three is not" blockchain listed company investment logic
In general, the development and landing of listed companies in the blockchain field continues to advance, the country's increasing emphasis on the blockchain field and the deepening of industry standardization will prompt more listed companies to deepen the blockchain business.
However, at this stage, there are also a large number of companies with the concept of “defective”. If there is no real business support, the bubble may burst soon. For investors, it is necessary to polish their eyes to distinguish.
The founder of the abacus think tank told reporters that the performance of listed companies in the secondary market is mainly related to the revenue and growth expectations of the company's main business in the future. This is the cornerstone that supports the company's stock price to continue to be stable and is also the source of value.
The core selection logic of blockchain+listed companies depends on the integration of the company's main business and blockchain technology. Can it help the main expansion or iterative transformation? Can it reduce the operation and maintenance costs and product costs of the enterprise? Is it the latest scene and track that blockchain technology can run out? Investors rationally use this framework to analyze companies, and they should also make their own value judgments. Baidu Index: In the past 7 days, the overall bitcoin search index fell by 24% month-on-month