On October 25th, Bitcoin suspended its falling day and then soared. It rose nearly 40% from the low point and broke through the $10,000 mark. This is the first time that Bitcoin has broken through this important barrier for more than a month. In addition, ASCII, BCH and other encrypted digital currencies have also risen.

The central government's high-level adjustment of the blockchain technology not only caused a large shock in the blockchain and concept stocks, but also caused some people's hearts to linger.

As of the reporting date, the blockchain concept stocks have experienced a large-scale decline. Except for a few stocks, the stock market has seen a sharp correction, but it is still the biggest hot spot in the market. The blockchain and digital currency concept stocks are not necessarily a bad thing. The nature of investment is always different. The short-term giant earthquake will not bury the medium-term highlights of valuable products in this sector, and the diversion funds will return to performance after the ebb. The best value for the best variety.

No matter whether it is low tide or high tide, it is not a pessimistic and not blind move. It is a good strategy to find high-quality stocks.

The digital currency of Chinese listed companies is divided into three parts: upper, middle and lower. This article is the next part, which talks about Hanwei Technology, Sifang Jingchuang, Julong Shares and Jinguan Shares.

The next few chain ratings will launch a special series of digital currency rivers and lakes, so stay tuned!

With mature blockchain underlying technology reserves, there are continuous blockchain business orders, and the business model is basically formed. However, large-scale sales have not yet been formed, which has little impact on the overall performance of the company.

Involved in the company: Zhongdun Yunan

Hanwei Technology (300007) is the full name of Hanwei Technology Group Co., Ltd., located in Henan Province, machinery and equipment – instrumentation industry, the main business is the development, production and sales of gas sensors, gas detection instruments and monitoring systems. On October 27th, Hanwei Technology released its third quarter report. The report shows that the company achieved operating income of 1.282 billion yuan in the first three quarters, an increase of 18.6% year-on-year. The net profit attributable to shareholders of listed companies was 120 million yuan, an increase of 33.58%. The block chain order revenue amount is about 5-8 million yuan.

Opinion : According to Tianshicha, Hanwei Technology participated in the shareholding of Henan Zhongdun Yunan Information Technology Co., Ltd. (“Zhongyun Yunan”) in the form of equity transfer, with an investment amount of 6.189 million yuan and a shareholding ratio of 40%.

The official website shows that Zhongdun Yunan has a mature technology and product system. The business covers the development of the public chain, the alliance chain, the private chain backbone, as well as smart contracts, digital wallets and super nodes. It has an underlying chain based on independent research and development. Breakthroughs in blockchain applications, including digital token issuance, trading, secure storage and other technical reserves. In addition, based on blockchain + scene exploration, including blockchain + supply chain finance, blockchain + traceability, blockchain + deposit certificate, blockchain + copyright protection.

Zhongdun Yunan has a blockchain business order, but currently the relevant operating income and net profit account for a small proportion, there is still some uncertainty about the future performance of the company. In addition, the integration of blockchain technology and the company's main IoT integrated solution business still needs a certain time to test, and there is uncertainty in the depth of future technology convergence. 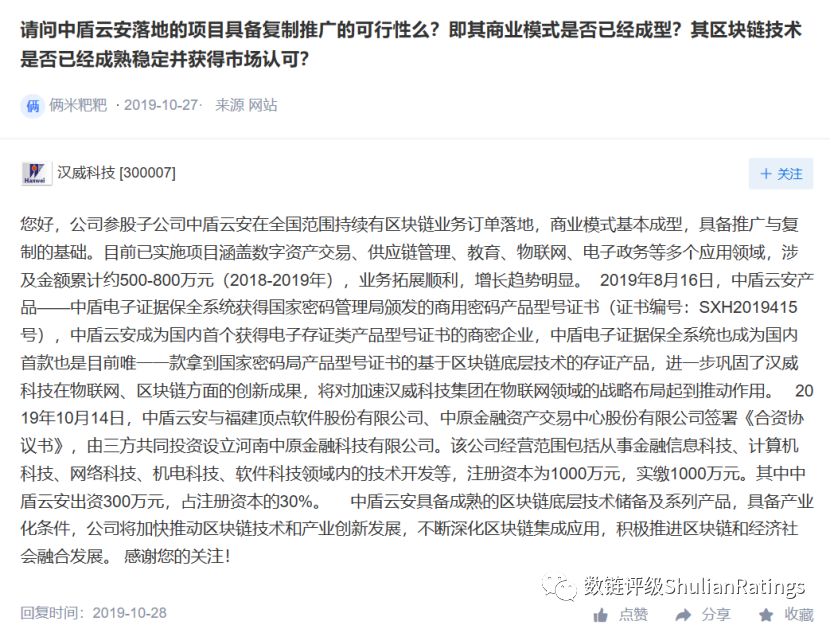 Compared with many domestic companies with only the blockchain concept, Zhongduan Yunan not only obtains product certification, but also has actual orders. In January 2018, Hanwei Technology announced that Zhongdun Yunan won the bid for the safety module of the electronic trading system of Guangdong Huanan Grain Trading Center, amounting to 436,500 yuan. The winning project belongs to the first development of the blockchain development of Zhongduan Yunan District. .

The technology reserve with digital wallet, related products and financial technology distributed platform solutions have been implemented. At present, the contribution of blockchain revenue to the company's performance is very small, and there is still uncertainty about the impact on future performance.

Involved in the company: Huawei; Tencent; Qianfang is close; IBM

Sifang Jingchuang is known as Shenzhen Sifang Jingchuang Information Co., Ltd., located in the computer-computer application industry in Guangdong Province. It is mainly engaged in the provision of IT service outsourcing for domestic and foreign commercial banks. On October 29, Sifang Jingchuang announced that the blockchain revenue in the first three quarters of 2019 contributed very little to the company's performance, accounting for only 0.33% of the company's total revenue in the first three quarters. There is still uncertainty about the impact on future performance.

Sifang Jingchuang said on the interactive forum that the company has laid out the blockchain since 2016. It is one of the 25 promoters of the Golden Chain Alliance and the founding member of the FISCO BCOS open source working group of the blockchain bottom platform; the company already has the number The technical reserve of the wallet; in May 2018, the company established a blockchain joint laboratory with South China University of Technology; in June 2018, the company issued an announcement stating the establishment of a wholly-owned subsidiary Shenzhen Qianhai Lexunfang Blockchain Technology Co., Ltd. Mainly engaged in technology development in the field of information technology and blockchain technology. The company said on the interactive platform that it is exploring the application of digital pass in the community through its wholly-owned subsidiaries, and launched a block-based talent interaction platform “Searching for Music”.

Quartet has made technical reserves and explorations in the blockchain and digital currency fields, and has reached cooperation with a number of companies, including Huawei and Tencent, and the distributed open platform solution “Fincube” jointly released with Huawei has been introduced to the market. However, it will take time for the company to form a sales contribution, which has no significant impact on the company's current performance.

In March 2017, Sifang Jingchuang announced that it had cooperated with International Business Machines China Hong Kong Co., Ltd. (IBM) to sign a project and signed a Business Cooperation Agreement, and as a starting point, hope to use cloud computing technology and design thinking. Promote the development of blockchains in Hong Kong and the banking industry. The cooperatively developed products have been successfully implemented by China Construction Bank (Asia) Co., Ltd.

In April 2017, Sifang Jingchuang announced that it had signed the "Strategic Cooperation Framework Agreement" with Qianfang Good Technology (Tianjin) Co., Ltd. ("Qian Fanghao"), and the two parties will be in blockchain technology and mobile payment. In a series of strategic cooperation, the company participated in Tencent's development support for bank payment business in 2018; during the 2019 Huawei Global Financial Summit, the company and Huawei jointly released the financial technology distributed platform solution “Fincube”, currently with the company Huawei's cooperative solutions have been introduced to the market.

Involved in the company: Hangzhou Yunxiang

Brief introduction: Julong Co., Ltd. (300202) is a full name of Julong Co., Ltd., located in Liaoning Province, a computer-computer equipment industry. It is mainly engaged in the design and supply of financial equipment products research and development, production and sales, and cash flow management system solutions. In October 2019, Julong shares issued a performance report that the net profit in the first three quarters was 44.9 million yuan, a year-on-year increase of 24%.

Hangzhou Yunxiang has a comprehensive layout, and cooperates with the National University of Singapore and Zhejiang University to develop blockchain technology and provide services for dozens of institutions. It is the only blockchain enterprise that participates in the formulation of the trade finance blockchain standard of the People's Bank of China; In 2017 and 2019, they won the bid for the Minsheng Bank and Everbright Bank blockchain projects.

Its official website shows that in September 2016, Yunxiang and the National University of Singapore established a blockchain joint laboratory, and the two sides carried out in-depth R&D cooperation on the core technology direction of the blockchain to promote the application of the blockchain in the financial field; The School of Science and Technology established the Blockchain Research Center for Intelligent Computing and Systems Laboratories; Yunxiang has formed products including blockchain infrastructure, blockchain trade finance systems, supply chain finance systems, big data risk control and anti-fraud systems. Provided services to dozens of well-known institutions such as Ronglian Yiyun, Bank of China, Minsheng Bank, China CITIC Bank, Industrial Bank, China Everbright Bank, Postal Savings Bank, Ping An Bank, etc.; has applied for more than 70 national invention patents, more than 30 software Copyright.

The layout of new energy and the Internet of Things is still in the stage of technical reserve, and related technologies will gradually be put into the actual product system. It is expected that the company's performance will not be affected in a short period of time.

Jinguan Shares (300510) is a full name of Jilin Jinguan Electric Co., Ltd., located in Jilin Province, electrical equipment – high and low voltage equipment industry, the main business is the development, production and sales of intelligent electrical switchgear and its supporting components. In October 2019, the company released the third quarter report, which showed that the operating income of the first three quarters of 2019 was 660 million yuan, and the net profit was 25.28.46 million yuan.

In September 2019, Jinguan Co., Ltd. announced that it had signed the "Strategic Cooperation Framework Agreement" and "Investment Intention Agreement" with Mobile Internet Co., Ltd. ("Transition Corporation") on September 21, 2019, intending to move to the company. The parent company, MailTime Inc, has increased its capital and won no more than 30% of the shares. The main purpose of the company's proposed investment in MailTime Inc is to develop blockchain, digital currency, big data and AI in the global market of new energy ordered charging networks and ubiquitous power internet of things.

For this cooperation, Jinguan shares said on the interactive platform that the cooperation with the mobile company has started the pre-research work, and the related technology has gradually been put into the actual product system; in addition, it is discussing with the Measurable Data Token (MDT) company about the grid. Digital currency business.

The “blockchain+vision” project was carried out in Chancheng District, Foshan City, Guangdong Province, and 130,000 primary and middle school students were able to screen for free eyesight.

Former CFTC Chairman: If 2017 is an encrypted cognitive year, then 2019 is the starting point for policy response.