These products are aimed at C-end users, relying on traffic to maintain their livelihoods, whether it is difficult to determine whether blockchain technology is really used, it is not easy to turn over.

On October 31, the Management Department of the Shenzhen Stock Exchange's startup company issued the “Notice on the Concern of Storm Group Co., Ltd.”, referring to Feng Xin, who has been arrested, and all the senior management personnel of Stormwind Company have resigned. Just three days ago, on October 28, when the Japanese stock market opened, the storm also surged with the blockchain concept stocks.

Stormwind Group caught up with the blockchain vents in 2017. The new storm film, which was controlled by Cui Tianlong, the chairman of Storm Group, launched two blockchain products, which also drove the stock price of the storm. However, its product design has led the outside world to think that the blockchain layout of the storm is in the “defective concept”. Now, the storm has already stopped at the opening on the 20th, and the storm and its blockchain products do not seem to wait until spring.

There are still many dying blockchain products, and there is no shortage of big companies to develop endorsements. Such as the previous NetEase circle, Netease planet, Baidu degree universe, 360 love drill and so on. Inter-chain pulse statistics technology company developed the application software named blockchain technology, most of which are game classes, relying on user behavior to generate points. These products are oriented to the C-end, and it is difficult to determine whether the blockchain technology is actually used in development and use. It is very quiet after the online launch. Now the blockchain spring has come, can it come back to life?

2018 is a year in which large factories concentrated on on-line blockchain products.

Xiaomi, 360 followed. On March 15, 2018, Xiaomi conducted a pet game encryption rabbit's internal test, and on April 19, it launched the Xiaomi wifi chain. 360 company on March 21, 2018, the online game block cat, on May 31, online based on the points of the advertising distribution scene earned 360 products to redeem the diamond.

Mutual chain pulse query public information, these products were all highly publicized before the release, but after the real launch, it disappeared.

From the point of view of product operation, there is no new development after the headline, encrypted rabbit, block cat and The Rose are on the line. NetEase Planet was unexploited in March this year. Although Netease officially denied this, there are still users who have reported to the media that the user group created by NetEase Planet at the beginning of the line has been unmanaged, and the telephone customer service has also been cancelled. NetEase's other product, Netease Circle, was launched in less than two months, making it easy to announce strategic adjustments on March 14 and close the cash withdrawal.

The longest operating time interval is the degree universe. It was launched in June 2018. In November, it announced the launch of a sharing plan, which is basically the "growth" product. 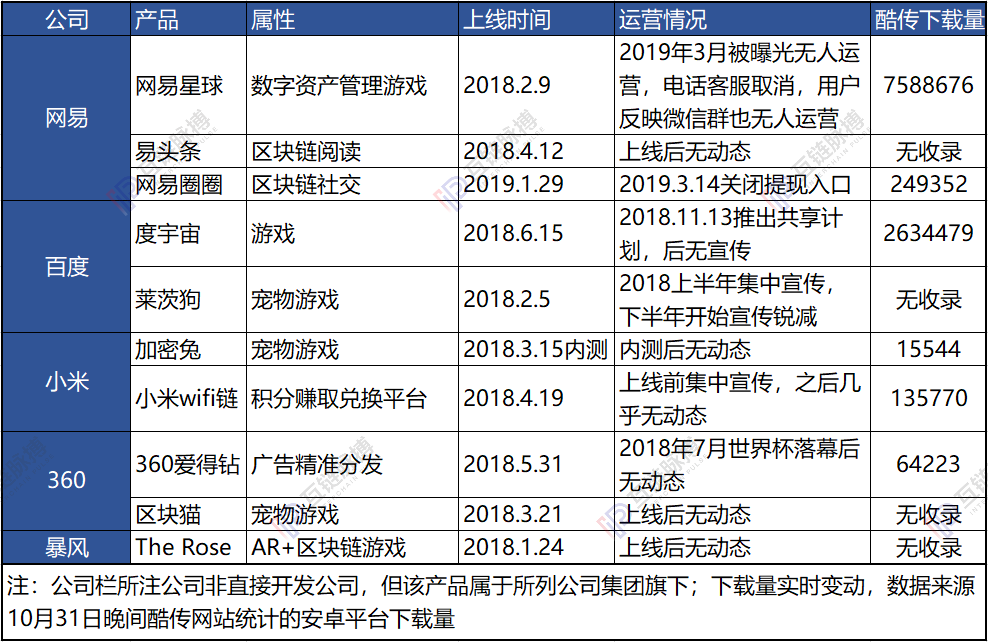 In addition, even if the blockchain concept is in full swing in recent days, it is difficult for these products to take the opportunity to attract new customers and regain their vitality. According to the data of the cool biography website, in addition to Netease Planet, there were 24,153 new users yesterday, and the universe added 137 users. Other products and new customers have not exceeded 100, and they tend to be silent.

The essence is the toC product of Internet thinking. Only use blockchain to make points.

This kind of product that is quiet shortly after going online may not understand the connotation of the blockchain.

The above products are aimed at C-end users, and have a heavier Internet product thinking. Whether or not the blockchain technology is actually used in the products is still to be considered. And no matter which field of social, game, reading, advertising, etc., its operating mechanism can not escape the acquisition and exchange of points. In the process of redemption, it involves the composition of gambling, which is like the gambling DAPP on the public chain.

Such as the current largest user Netease planet. According to its official website, the base of the planet can build the identity of the inhabitants of the planet base and realize the value of the data based on personal data, attention, and data generated in social, entertainment, and shopping. Read the APP headline to integrate the content and recommendation technology in the NetEase domain. Users can obtain the “physical value” points through reading and sharing, and improve the mining ability to obtain resources.

In the Baidu Encyclopedia introduction of Baidu's universe, the universe was announced to be released after the opening ceremony of the World Cup. Its gameplay is that users can acquire the "elements" of the universe through a variety of system behaviors, and obtain the "gravitational" reward, which is equivalent to the TOKEN incentive of the universe.

Also with the heat of the World Cup, there are 360 ​​love drills. 360 love drilled on May 31, 2018, in the Baidu search engine to retrieve its information, in addition to the news on the line, almost all related to the World Cup gambling news, there will be no dynamic. 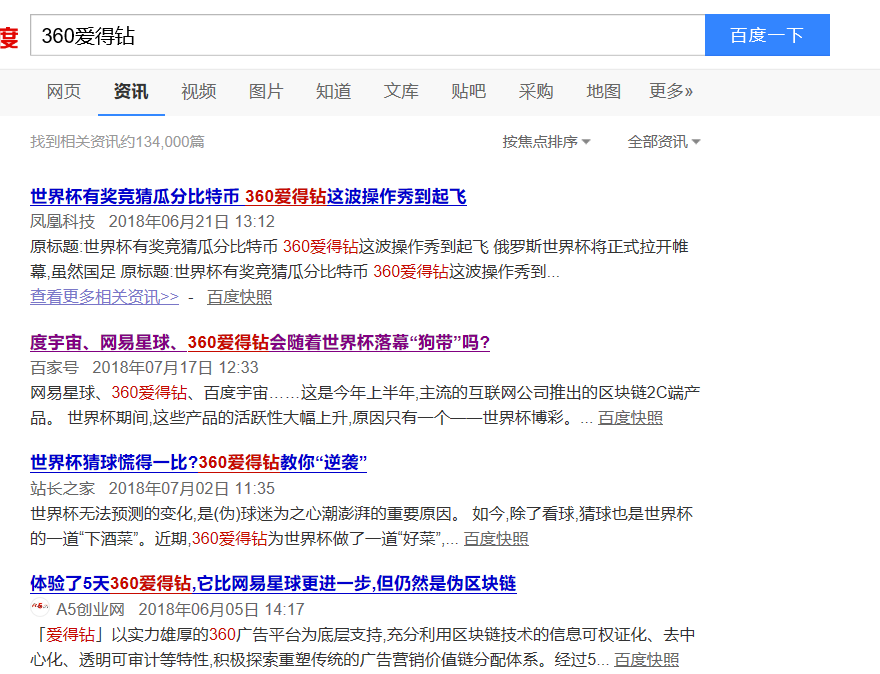 Not to mention pet games such as the Leitz dog, the encrypted rabbit, and the block cat, imitating the game form of CryptoKitties, using the dog, cat, and rabbit in the game as an encrypted collection to encourage users to share and “poke” "Obtain the behavior to acquire the token, then buy, sell or trade." The role of blockchain technology is to help users safely track ownership of the subject.

Similarly, The Rose promotes the use of AR+ blockchain technology. However, the technology itself is less involved, and more is the need for users to purchase virtual assets – users buy virtual roses through real assets, then water, record, and finally display the 3D panorama on the phone through AR or holographic projection, the time the rose is given, The location and message content are recorded using the blockchain. But in fact, such token-encrypted pets and plants are initially worthless, and the game logic cannot be established. In the end, it can only be reduced to a fund game.

The current latest policy points out the application scenarios of the blockchain: it is necessary to promote the deep integration of the blockchain and the real economy, and solve the problems of difficulty in financing loans for SMEs, difficulty in controlling the risks of banks, and difficulties in departmental supervision. It is necessary to use blockchain technology to explore digital economic model innovation, provide power for creating a convenient, efficient, fair and competitive, stable and transparent business environment, and provide services for promoting supply-side structural reforms and realizing the effective docking of supply and demand in various industries, in order to accelerate new and old kinetic energy. Provide support for continuous transformation and promote high-quality economic development.

The blockchain products of these big factories do not seem to meet the above requirements, and it is not easy to turn over.

Opinion: If Bridgewater Fund invests in Bitcoin in early 2012, its return will exceed 15,000%

The USDT can't stop the “additional addiction”, is the currency market rejuvenation a false prosperity?