This article is compiled for Coinbase and describes the development of Bitcoin in 11 years and 11 quantitative indicators on Bitcoin.

On October 31, 11 years ago, the Bitcoin White Paper was published, which forever changed technology, finance, and our relationship with money.

Like other technologies, funds have undergone several upgrades over the years. It trades shells and metal coins to develop applications and swipe cards, from facilitating transactions between neighbors to connecting billions of people around the world. However, there are still some restrictions in our current financial system that can cause billions of people to open bank accounts or obtain stable currencies, international transactions can take several days, and so on.

Bitcoin is the latest breakthrough in technology with thousands of years of history. Although Bitcoin was invented 11 years ago, it has changed the world's perception of money. To celebrate the 11th anniversary of the Bitcoin White Paper, we have studied 11 quantitative indicators, indicating that Bitcoin is gaining momentum, creating economic opportunities and increasing global utility.

Few revolutionary technologies can generate public interest and imagination as quickly as Bitcoin in just 11 years. The email was invented in 1972, but it was not accepted by more than 10 million people until 1997. The TV was invented in 1927, but by the end of the 1940s, only 2% of American households owned television sets. On the other hand, Bitcoin has grown from an idea in 2008 and the first transaction in 2009 to more than 27 million users in the United States in 2019, accounting for 9% of the US population.

The first bitcoin transaction took place on January 12, 2009, when Satoshi Nakamoto sent 10 bitcoins to computer programmer Hal Finney. Since then, activities on the web have been steadily accelerating, regardless of price changes.

More than 55,000 nodes (actually computers running Bitcoin software) are connected to the Bitcoin network. The node is the basic real source of the Bitcoin ledger and is responsible for recording and verifying transactions. Although the Bitcoin network can theoretically run on a few computers, more nodes can enhance dispersion and security. By allowing anyone with a computer and Internet access to run a node, Bitcoin allows anyone, anywhere to have voting rights in this global system.

Although Bitcoin was originally conceived as a peer-to-peer electronic cash system, it has become much more than that – it is now also a popular investment and value storage tool, similar to gold. This is especially true in areas with high economic fluctuations.

A national survey conducted by Coinbase in collaboration with qriely shows that investors believe that cryptocurrencies such as Bitcoin will have higher returns after 10 years than ETFs, index funds and their own companies.

Since 2013, Bitcoin has outperformed the world's most popular stock indexes, including technology stocks and the S&P 500. Although the price of Bitcoin has fluctuated, after many bull market conditions, its trend is up and to the right. This year, Bitcoin also outperformed the global stock market index, generating a return of +132%. In contrast, the Nasdaq 100 index rose 17%, the S&P 500 index rose 12%, the FTSE Euro 100 index rose 11%, and the FTSE ASEAN 40 index fell 3%.

(Investors aged 18 to 34 are more likely to hold passwords in their financial portfolio than precious metals. According to a survey conducted by Coinbase and qri, one in four investors with MBA or PhD degrees Use the password as part of its financial portfolio.)

If you start buying Bitcoin worth $10 from October 21, 2015 and doing it every month for the next four years, your total investment of $480 will be worth about $3,337 today, which is value added. 595% (as of October 21, 2015). The average cost method, which is the regular purchase of bitcoin, is a popular way to gain long-term exposure to this new asset class. Regular purchase of bitcoin is also known as "stacking sat" and refers to "satoshi", which is 0.00000001 BTC.

(According to qriely's survey, 77% of investors' portfolios with higher incomes ($200,000/year/year) hold bitcoin.)

In the three regions of Venezuela, Argentina and Hong Kong that experienced high economic volatility this year, the peer-to-peer BTC exchange LocalBitcoins.com experienced a surge in premiums and trading volume. The economies of Argentina and Venezuela are being devastated by inflation, corruption and capital controls. Since 2013, the Argentine peso, the Hong Kong dollar and the Venezuelan Bolivar and Bitcoin have traded more than $600 million. Recently, as tensions intensified, Hong Kong’s bitcoin trading volume also reached a record high.

Bitcoin was originally created as an “electronic currency” that can be used for everyday transactions rather than traditional cash or credit, but this is not the main driver of Bitcoin's growth to date, and only a few regions have experienced economic fluctuations. However, millions of people have already traded on the Bitcoin network, and thousands of stores are accepting bitcoin payments, and new technologies make using Bitcoin faster and cheaper every day.

Bitcoin's most famous attack vector is to change the bitcoin network by controlling more than 50% of the network computing power or hash rate. This type of attack is known as a 51% attack, which allows an attacker to double their transactions or review other people's transactions.

The bitcoin hash rate is important because it measures the security of the network. The higher the hash rate, the greater the computing power required. The bitcoin hash rate has recently reached a record 108 million bytes per second. Bitcoin is undoubtedly the largest computing network in history and the safest blockchain. This means that controlling most of the computing power requires a lot of computer hardware – buying it directly will cost more than $4 billion. Even if someone happens to have billions of dollars in their pockets, the cost of acquiring, storing, and powering the hardware will be too high.

Bitcoin costs and trading hours are very small compared to traditional financial systems. The cost of international wire transfers through major US banks is approximately $45, which may take several days to process and can only be completed during banking hours. On the other hand, the cost of Bitcoin transactions is usually around $0.75, which can be done 24/7, can be seen immediately on the network, and is widely considered safe after confirming the six blocks that occurred within about an hour. of.

The current limit is the number of transactions that the Bitcoin network can process per second, currently about seven. The Bitcoin Lightning Network is a way to increase throughput by using the concept of a bar label. Unlike each transaction that settles on the Bitcoin blockchain each time, Lightning Network allows individuals to carry a tag with others, where many transactions can be made back and forth, with only the final consolidated balance being regularly in the main Bitcoin block. Settled on the chain.

This year alone, the number of lightning corridors has increased by a factor of 19, and the participation rate of lightning network nodes in 83 countries has recently exceeded 10,000 nodes. 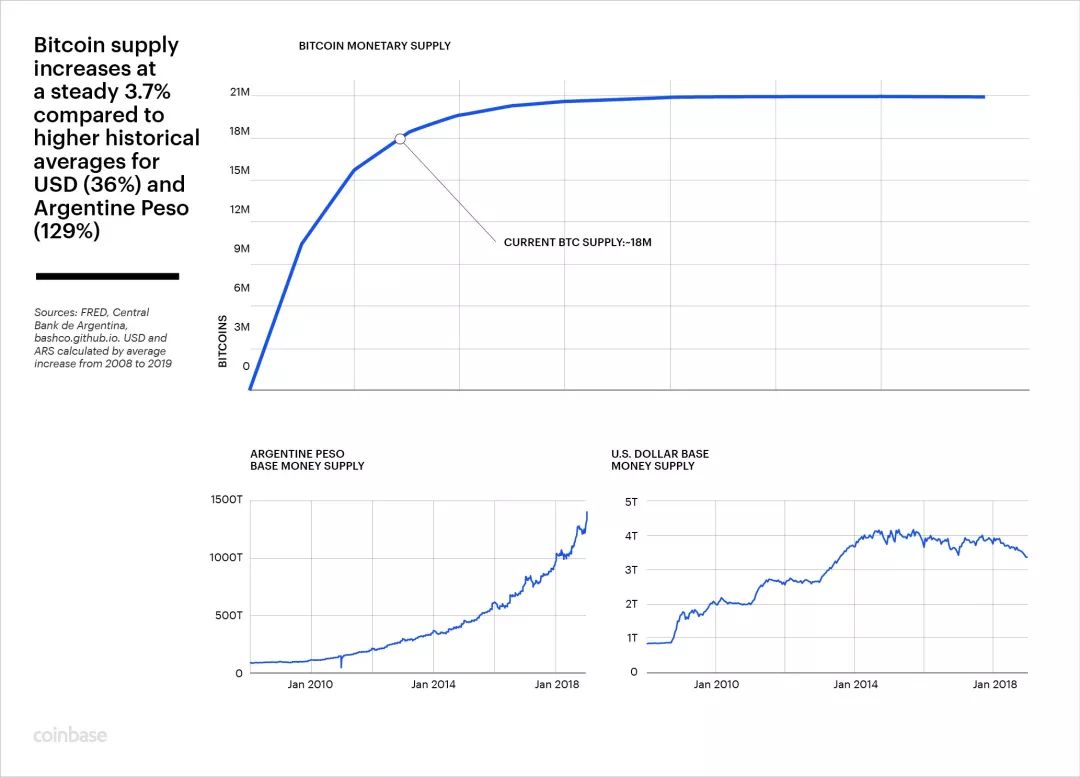 The underlying code of Bitcoin controls the amount of new Bitcoin and limits the maximum number of Bitcoins that may exist. Today, on the 11th anniversary of the birth of Bitcoin, more than 18 million bitcoins have been mined, further reaching the upper limit of 21 million, which is expected to reach this limit in 2140.

By programmatically controlling the amount of new Bitcoin, Bitcoin's supply expansion is predictable and stable. On the other hand, the supply of fiat money may fluctuate significantly, which is unpredictable. Since 2008, the average US dollar supply has grown by 36% annually, and the troubled Argentine peso has grown by 129% annually. In contrast, the annual supply of Bitcoin is currently growing by 3.7% and will fall to 1.7% next year.

What is the next step in Bitcoin?

Hal Finney, the world's first recipient of bitcoin transactions, said: "Computers can be used as tools to liberate and protect people, not to control them." "Bitcoin is the world." The first is to use the power of computers – and the innate innovation needs of human beings – to achieve a global currency for global economic freedom. We look forward to the adoption, innovation and interest of Bitcoin in 2020.

The trading volume of the Ethereum mainstream exchanges has dropped significantly, and the fundamentals are relatively stable.