You may think that the most active blockchain network of tokens is also the most demanding. But is this really the case? How close is the relationship between token prices and their network activity?

To find out, LongHash analyzed daily price data and address data for the top 18 tokens (excluding stable coins) on Coin Metrics. Specifically, we looked at the daily price of each token on Coin Metrics, which tracks the dollar-denominated closing price of each asset (ie UTC midnight price); and the active address on Coin Metrics Total, this metric represents the total number of unique addresses that participated in at least one transaction on the network that day (but each independent address will only be counted once a day).

Then, for each asset, in the total available data for Coin Metrics, we calculated the Pearson correlation coefficient for the two variables, price and active address. Since the time at which the site starts tracking each token varies, some tokens will have more data, but with the exception of one token (BSV), the correlation coefficient for all tokens is based on at least one full year of data. As a result, most of the tokens are much longer than a year. 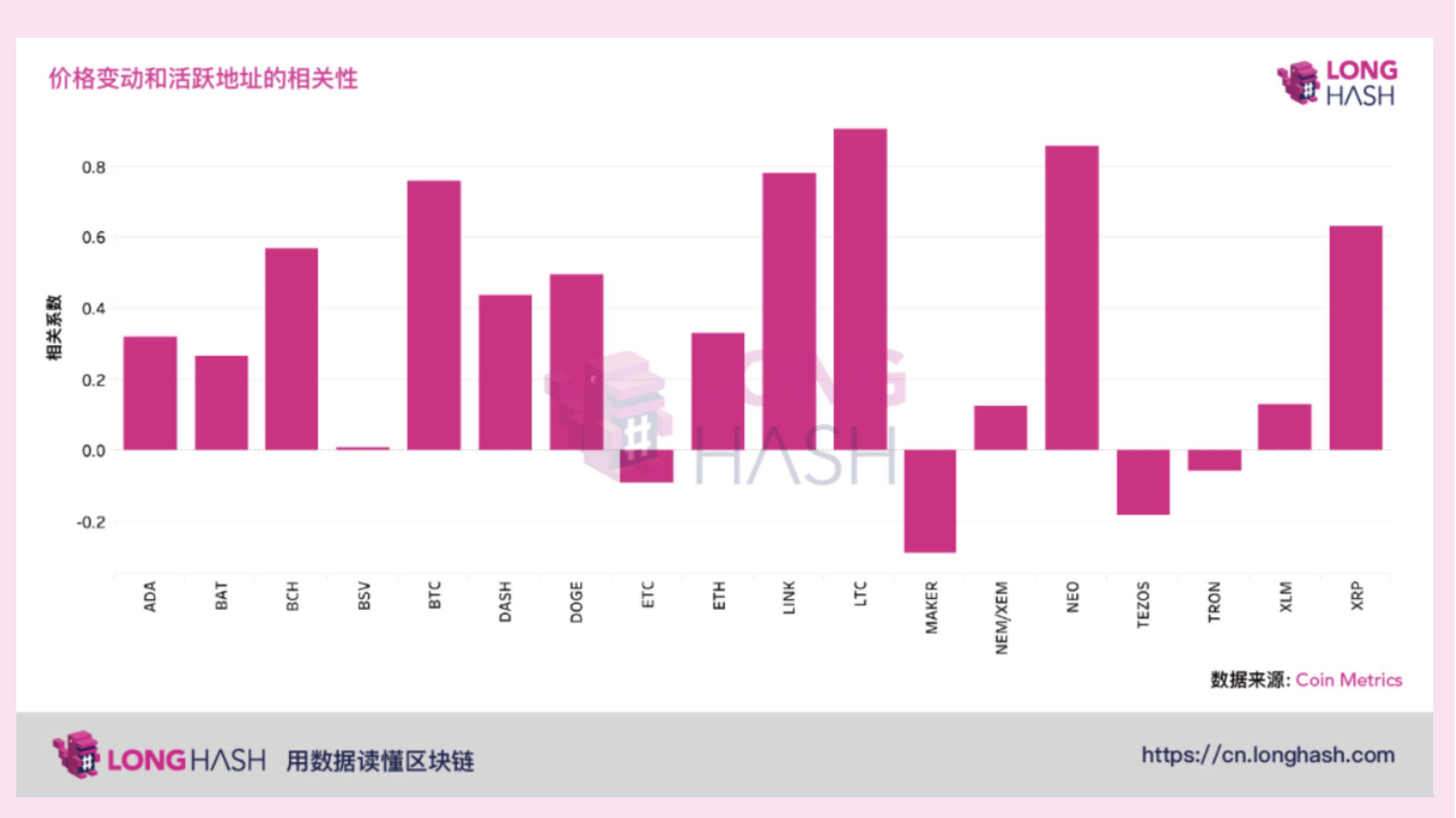 As can be seen from the chart above, there seems to be a strong correlation between the price movements of some tokens and the number of active addresses. BTC, LTC, LINK and NEO all meet this requirement, which means that when more users trade on these networks, the price of the corresponding token will usually rise.

It is worth noting that Ethereum also belongs to this category, and its active users and prices only show a certain weak correlation at best. This may be due to the fact that Ethereum is positioned as a “digital oil” to promote the development of DApps developed on its network, which means that only a small percentage of Ethereum users will regularly participate in the most direct price increase. In a transactional transaction. For example, sending an ETH to DApp will cause this account to be counted in Coin Metrics' current ETH active user total, but it will not affect the price of ETH on the exchange as TUSD affects BTC prices for BTC transactions.

Although the total number of active users may not be a valid indicator for predicting the price of day trades, in the longer term, it seems that some tokens like LTC do show their token prices and active users trading on the web on certain days. A strong correlation between the numbers.

However, from a broader perspective, the data suggests that network activity and token prices are not always closely related in the short term. This means that a surge in user activity does not necessarily lead to a surge in prices, especially when it occurs on a token network like MAKER. Historically, the correlation between the number of active users of these tokens and the price of tokens is minimal.

This article comes from: LongHash

People's Daily: Blockchain fortune? You think too much