Seven party media released 62 blockchain reports a week: Xinhua News Agency issued the most, People's Daily is the most concerned about data and industry

After Xinhua News Agency published the relevant content of the blockchain "learning speech" on October 25th, the blockchain boom began and spread from top to bottom. Traditional media that have rarely mentioned the topic of blockchain in the past, and even the party media have begun to report blockchain technology and applications in large numbers, and have published many comments on the blockchain.

From science to application, from industry to digital currency, the party media fully traces the blockchain At the same time, Xinhua News Agency is also very concerned about the news of the blockchain industry in recent days. For example, A-shares will go up, Jianan Canaan submits IPO prospectus, and concentrate on the results of China's existing blockchain industry, such as the application of blockchain application in China's Xiong'an New District, and the trade finance blockchain of the People's Bank of China. The platform business volume and Shenzhen blockchain electronic invoices have exceeded 10 million. 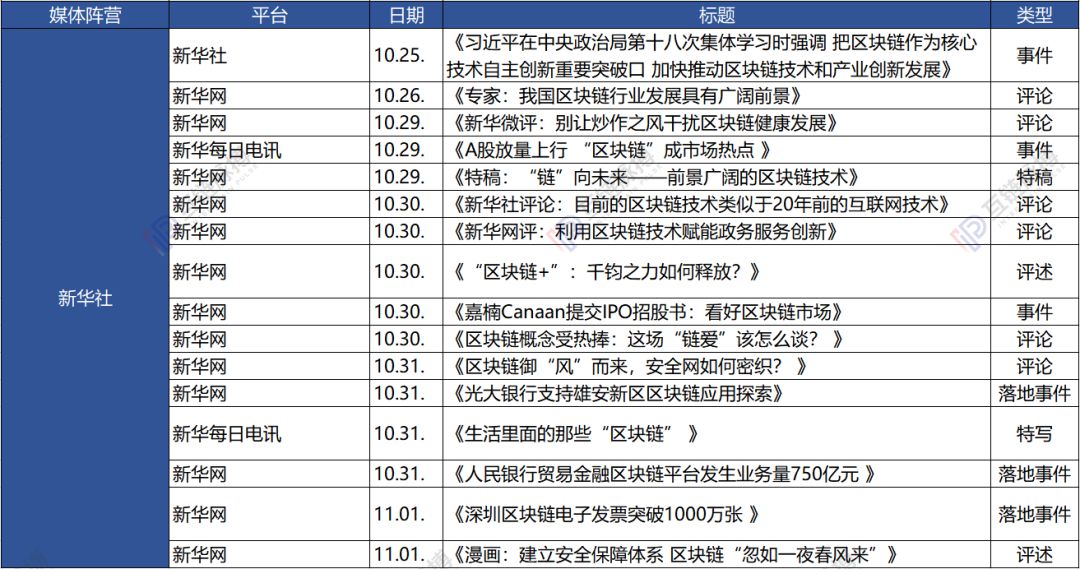 Mutual chain pulse search The high-frequency words reported by Xinhua News Agency are: security, data, and innovation. Many of his articles mention the security issues that blockchain technology will encounter in its application and how to solve it. In addition, Xinhua News Agency also issued a special comment, pointing out that blockchain technology can be used to innovate and develop other areas of business, such as promoting government service innovation. Guangming Daily’s focus is on the application of blockchains in the digital economy era. On October 27th, he published an article titled “Promoting Digital Finance Development with Blockchain” and published an article on “On the Blockchain of the Digital Economy Era” on the 29th. Guangming Daily also pays attention to the empowerment of small and medium-sized enterprises in the judicial field, the people's livelihood field, and the blockchain in the supply chain.

Among the three articles published by the Central People’s Broadcasting Station in the past week, the first article pointed out that the blockchain ushered in favorable policies and became an important breakthrough for core technological innovation. After that, Yangguang.com reported that the first blockchain dual-creation certificate was issued in Xi'an University of Electronic Science and Technology; and the speech of the block of the blockchain supervision by Chen Chun, an academician of the Chinese Academy of Engineering.

The number of related news released by CCTV is more than 15 pieces, many of which report on stock market changes caused by blockchain. In addition, CCTV also released a number of videos to carry out blockchain technology and application of science.

China Daily has repeatedly mentioned Libra and Zuckerberg, and the Economic Daily has studied the blockchain financial application.

The China Daily published an article on the blockchain and digital currency, what you need to know on October 29th. The text refers to digital currency 21 times, Libra is mentioned 6 times, and Zuckerberg mentions 4 times. The economic daily topics are all concentrated in the economic and financial fields, so it involves the application of financial segments, such as supply chain financial applications, blockchains in the field of public welfare poverty alleviation and universal insurance.