In addition, the inter-chain pulse observed that the early blockchain concept stocks such as Julong, Yilianzhong and Sifang Jingchuang have been in a continuous decline, some just because of the blockchain concept. The stocks are all in the sand.

When the east wind gradually disperses, the next road will be the real power and realism of the blockchain of each listed company.

On October 25th, the “Learning Speech” was officially announced; on the first Monday, the blockchain concept stocks exceeded the daily limit of 100.

Today, just a week after the launch of “Lee”, the market for blockchain concept stocks has gradually returned to calm. Today's market data shows that Julong's shares are close to the down limit (down 9.72%), Yilianzhong and Quartet Jingchuang also continued to fall, down 6.03% and 5.72% respectively.

Prior to this, the interchain pulse had counted the blockchain research and blockchain practices of these listed companies. And trying to analyze the reasons for the decline in the stock prices of these companies in addition to the stable return of the market through recent public information. 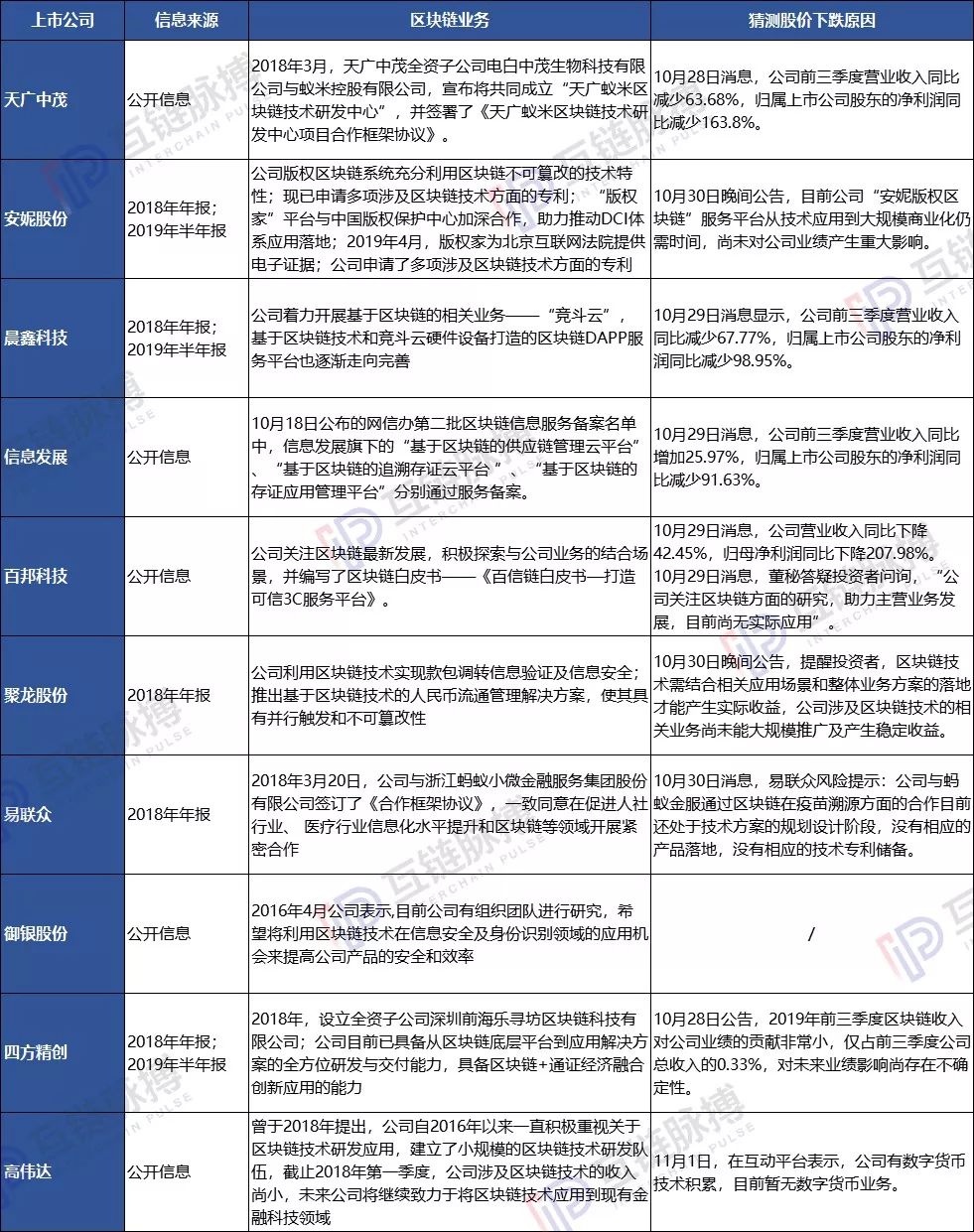 However, looking at the table, there seems to be no law to follow. Among them, listed companies that had early layout of the blockchain sector experienced serious declines after announcing specific blockchain business conditions.

It can be announced on the evening of October 30th: blockchain technology needs to be combined with relevant application scenarios and the overall business plan to generate actual revenue. The company's related business involving blockchain technology has not been able to promote large-scale and generate stable income. After that, it fell to the limit on the 31st, and it was close to the limit on November 1.

At the same time, there are listed companies that may be affected by the three quarterly reports. On October 29th, Chenxin Technology (which once launched the "competition cloud" business based on the blockchain) decreased its revenue in the first three quarters by 67.77%, and the net profit attributable to shareholders of listed companies decreased by 98.95%. Subsequently, on October 30 and 31, its share price fell successively.

In addition, there are listed companies such as Tianguang Zhongmao. It is reported that the combination of Tianguang Zhongmao and the blockchain field is only its wholly-owned subsidiary, Dianbai Zhongmao Biotechnology Co., Ltd., and signed a cooperation framework with Mimi Holdings Co., Ltd. in March 2018, announcing that it will Jointly established a blockchain technology research and development center.

On October 28, the company's quarterly report showed that operating income in the first three quarters decreased by 63.68% year-on-year, and net profit attributable to shareholders of listed companies decreased by 163.8% year-on-year. However, Tianguang Zhongmao still relied on the blockchain's favorable Dongfeng, which rose for two consecutive days. It began to fall sharply on October 30, and it has been three consecutive days.

Although there is no law on the rise and fall of the above-mentioned company's stock price, it is obvious that listed companies that are not involved in the blockchain field will face the harsh "elimination" of blockchain development.

According to the company's annual report, Xuanya International's shareholding company has been promoting the R&D investment and implementation of the blockchain project. In the first half of 2019, the company also completed the phase of the Internet of Things + blockchain technology project. R&D and cooperation with universities established a blockchain research center.

These companies have recently introduced their previous blockchain business developments in response to investor questions and risk warning announcements.

In addition, listed companies such as Huayang Lianzhong, Liaison and Interaction, Contemporary Oriental, and Jingu Co., are not just relying on Dongfeng to “slow up”. They all have new “upswing point” disclosures in the near future, such as blockchain application landing, blockchain investment, and cooperation. At the same time, these companies rely on the original blockchain accumulation to stimulate the stock price, which is still strong at this time.

Among them, according to the public information, Huayang Lianzhong joined hands with the Thunderbolt chain in 2018 to study the combination of blockchain technology and digital marketing, and completed the marketing from “new user growth” to “user value growth” through the Magellan project. Operational conversion. At present, Anta, multi-point Dmall and Cat's Eye will become the first brand customers to access the platform.

All of the above companies have begun to promote the development of blockchains before the arrival of the blockchain dividend. At the time when the "1024 Learning Speech" set off a blockchain wave, its blockchain development potential and strength were discovered. Recently, the listed companies that have contributed to the blockchain cooperation investment and application have become the "new darling of the stock market."

When the blockchain powers compete in the Central Plains, these first layouts, which coincide with the development of the company, will be the first step to become a wave.

Opinion: French insurance funds are conservatively expected to have 1 billion euros flowing into the currency market