After 2018 years of demons, the industry entered a cold winter, but slowly returned to rationality. After the baptism of 2018, the battle of the public chain focused on ETH, EOS, and TRX. These three public chains are currently the most popular public chains in the world, each claiming to be the next generation blockchain infrastructure. The first quarter of 2019 has passed and their respective developments are in full swing.

The third-party big data platform RatingToken and RatingDapp have analyzed the performance of the three major public chains in the first quarter, helping everyone to understand the status quo of the public chain more intuitively and comprehensively.

Therefore, the more active DAPPs in a public chain, the stronger the competitiveness of this public chain.

At present, the number of Dapps in the three major public chains are: ETH: 2406, EOS: 240, Tron: 235. The number of smart contracts in Ethereum is significantly more than EOS and Tron, indicating that Ethereum is more attractive to developers, but active. And the transaction situation is another scene: 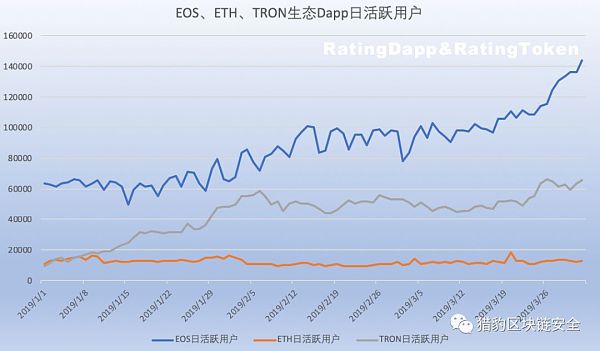 As can be seen from the above figure, EOS and Tron are obviously one order of magnitude ahead of ETH in terms of the number of active users, the amount of transactions and the number of transactions, which is related to the high commission and slow transfer speed of Ethereum. EOS's 0 fee and fast transfer are a great experience for both developers and Dapp users. RatingToken analysts believe that this is the root cause of EOS's temporary lead.

However, if we deepen the composition of the three chain transaction data, we will find that the health of the three Dapp ecosystems is very different. The following figure is the classification statistics of three public chain DApp transactions:

It can be seen that the transaction data of EOS and Tron is dominated by the quiz-like DAPP. Although the development shows explosive growth, it will be subject to a large bottleneck in the future development due to mainstream values ​​and laws.

For example, the “spinach” Dapp “Endless Game”, which has long occupied the top of Ratingdapp, contributes 4W+ user activity and 10W+ transactions per day to EOS. The second-ranked Dapp “Hash Baby” can also be used every day. EOS contributes nearly 50W+ transactions.

From this perspective, EOS and Tron's temporary lead is built on an unhealthy state.

In terms of DAPP performance, EOS is temporarily ahead of Tron, but their DAPP composition is not healthy, and Ethereum is temporarily behind. The root cause is high commission and slow transfer speed. The Ethereum team has clearly realized this problem. In the EIP improvement program, the user-free plan was submitted. If the future development of Ethereum 2.0 is successful, and a large number of developers agree, Ethereum is likely to catch up in the third and fourth quarters. Of course, in the future, everything is unknown. EOS and Tron may use the existing first-mover advantage to launch more Dapps that are accepted by mainstream values. It is also possible to continue to lead ETH.

The performance of the public chain Token in the secondary market is the most intuitive and basic data, including Token's price, circulation, total amount, current market value, online trading platform, trading pair, transaction amount in the past 24 hours, etc. Everyone in the industry knows about this data.

These data are available in many public channels, I believe everyone knows, and will not go into details in this analysis.

We focus on the “30-day daily return volatility” indicator from the beginning of this year to the current three public chain Tokens. The reason for choosing this indicator is because the number, time and strategy of the three Tokens are not In the same way, "30-day daily return volatility" can comprehensively reflect the recent Token market performance, user returns and so on.

Overall, from the beginning of the year to the present, the price of Token in the three major public chains has increased; the overall income of holding EOS is higher than ETH and TRX; and the price fluctuation of TRX is relatively large.

Generally speaking, the early stage of a new technology requires technology to take the lead. From the current point of view, there are still many problems in the public chain itself, such as poor performance, which cannot support large-scale applications, and cannot provide real random services on the chain. The application development threshold is too high, etc. All these problems require developers to solve with creative technical solutions.

In the case of Ethereum, it is expected that the “quiet” version of Ethereum 2.0 will be available at the end of this year. Vitalik introduced the technical features of Ethereum 2.0 as early as last year’s Devcon4 keynote speech, including ACE. Algorithms, Casper; scalability, fragmentation; virtual machine upgrades, EWASM; enhancements on cross-chain contracts; improved protocol economic models; and many improvements that contribute to the decentralization of logical layers.

At that time, the efficiency of Ethereum's production will be exponentially improved. According to the official statement, it can reach the order of 100,000 TPS. 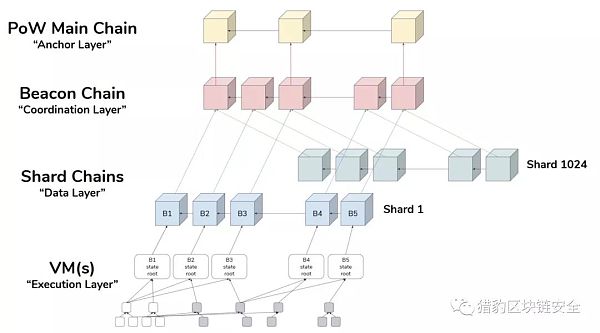 Compared with Ethereum, EOS has been positioned as an enterprise-level distributed application from the very beginning. The core selling point is naturally its high-performance processing capability, easy development, and free users. It was once labeled as “Blockchain 3.0” by the media. title.

Vision is the vision. The current TPS of a super node is about 4,000. It is far from the “Million TPS” in the white paper. EOS developers and super node operators are constantly optimizing the physical architecture and algorithms themselves. In addition, the planning of the EOS second edition white paper is also in an orderly manner, including the implemented DPoS + Byzantine fault-tolerant algorithm, DApp custom database; and cross-chain compatible, in-memory database, parallelized transactions in development.

Finally, look at Tron, although Tron's technological innovation was once criticized, but through the acquisition of BT company and large-scale developer incentive plan, reserve a certain amount of developer resources, the strength can not be underestimated. From the official weekly report, Tron's key plan this year will be the sidechain and the anonymity development of the wallet. In addition, if the industry has any creative technological breakthroughs, I believe it will follow up for the first time.

In general, Ethereum is currently leading the technical strength, followed by EOS and finally Tron. Of course, if a basic public chain is to succeed, it is impossible to rely solely on technological innovation. It must also rely on the team, the ecology, and the funds and users that it has in hand.

4. The community is active:

According to the “Community Active” index of RatingToken, ETH, EOS, and TRX currently have 4.6 points, 4.8 points, and 5 points respectively. For the "full score" performance of TRX, I believe that everyone will not be surprised. The founder of TRX, Sun Yuchen, has more than 1 million Twitter fans, and the number of Weibo fans is 1.1 million. The Facebook fans of the Wavefield Foundation are also more than 1000000. It can be said that Tron is the most popular public chain among the three.

The Ethereum Foundation's support program began in early 2018, and now it has reached the fifth round. From the official blog, this year's Ethereum incentive plan focuses on the Layer 2 project, which is in line with their overall expansion target this year. Fit. However, the community has recently erupted a small crisis in the incentive. The community members questioned the Ethereum Foundation's opaque use of the fund. The official response said that the reason for choosing opaque is to avoid comparison between different projects. I hope that the Ethereum Foundation can handle this incident very well.

Unlike Ethereum, EOS has established EOSVC, and the scope of investment is relatively wide. It is not only to support investment projects related to EOS ecology, but also to focus on leading-edge technologies, compared to Ethereum, which only focuses on Layer2. The scope will be wider. According to the official website, the overall investment amount is 1 billion US dollars. The current investment direction includes decentralized incentives, games, and KYC services. In addition, EOS has also held a hackathon competition around the world, and the fifth game has ended, with a total prize of more than $1.5 million.

Unlike the first two, the Tron Foundation's incentives are mainly focused on Dapp developers and users, such as RMB 100 million in the “Most Luxury Activity” in March and US$ 20 million after reaching a partnership with USDT. Airdrop activities, as well as three earlier BTT airdrop plans.

In the past quarter, EOS was the hardest hit, with 21 major security incidents. Most of the attacks were "spinach" games, and a large part was related to random numbers. Tron was also attacked for the first time in the near future, and the vulnerability is also a random number problem. The security incidents of ETH are relatively few. This is mainly because Ethereum is relatively mature, and the overall Dapp is relatively backward. The cost of hacking is high and the benefits are limited.

EOS and Tron suffer from random number problems, and it is currently difficult to get an effective solution, while EOS and Tron's quiz games account for a large proportion, which may have a certain impact on future trends.

The stories between the founders of the three major public chains often lead to the onlookers of the melons. The three founders are very distinctive people, especially V God and Sun Yuchen. They are all 90s, and they are on the tiwtter. It is also very frequent. Just a few days ago, April Fool's Day, V God also sent a photo with the background of the wave field, and the text "Toward a brighter tomorrow."

In fact, the contradiction between them has been in existence for a long time. As early as last March, when the wave field tested the online line, Sun Yuchen took the initiative to “touch porcelain” in Ethereum, and listed 7 wave fields on Twitter as better than Ethereum. reason.

V God will leave a message under this tweet for the first time. On top of these 7 items , the eighth item should be added: Ctrl+C and Ctrl+V are more efficient than typing new content on the keyboard.

V God and BM are geeks, and the mutual enthusiasm between them is concentrated on the technical level, while the wave field founder Sun Yuchen is good at marketing, and often “touches porcelain” Ethereum, which naturally leads to V God. dissatisfied.

For the public chain, if you want to win in a highly competitive environment, you need not only technological innovation, but also investment in various aspects such as capital and marketing. After comparing the above dimensions, we can intuitively feel that EOS is currently relying on it. Mechanism 0 fees and relatively efficient performance are temporarily leading the DAPP ecosystem, and Tron has a place with its strong marketing capabilities. But at present, ETH is not so easy to be replaced. Q4's ETH2.0 development is completed, can the king return, let us look forward to it. There is still a long way to go in the public chain project, and it is not known who the deer will die.

Analysis: The mainstream cryptocurrency exchange under the BSV is not a review