Special statement: This article on behalf of the original author's personal point of view, the first class warehouse does not make any evaluation of the market price, always maintain an objective and neutral concept, presenting diverse information for readers.

Bitcoin is probably the strangest phenomenon of the 21st century: this digital currency is not supported by gold, any fiat currency or any other physical asset, but its value is constantly increasing. Some people think that this is entirely a "tulip hot" hype, but the truth is far more than that. So, what is the value of the cryptocurrency? What is the reason for the increase in bitcoin prices? Does it all depend on people's belief in it? We will discuss together below.

So, what determines the price of Bitcoin? Here are a few possible factors.

Next we will analyze it in detail. Let's start with the last aspect. This factor is often overlooked, but some people say that there is a certain connection between the difficulty of BTC mining and the rise and fall of Bitcoin , as shown below. 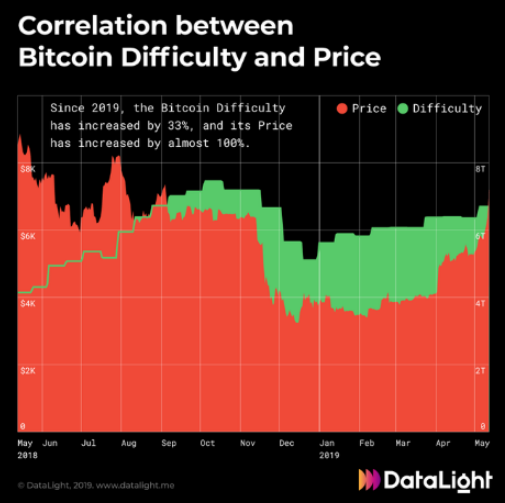 (First class note: The figure shows that the price of bitcoin since 2019 is directly proportional to the mining difficulty, source: cryptocurrency data platform DataLight)

DataLight analysts explained that there is a theory that as more and more miners begin to mine digital currencies, the complexity and hash rate of cryptocurrencies rise as prices rise. But according to another hypothesis of the trader Max Kaiser (he bought Bitcoin for $3 and held it so far), the opposite is true. The third argument is that a specific value calculation formula can be derived by studying the difficulty and value change of cryptocurrency mining.

The second supply factor is the maximum number of bitcoins that can be circulated in the system. This number is limited to 21 million bitcoins. Once this number is reached, miners will no longer be able to dig out bitcoin. At this stage, miners “mining” may receive transaction fees and packaged block rewards. But with the introduction of 21 million bitcoins, miners will only be able to get transaction fees, and the price of bitcoin will depend on the practicability, legitimacy and demand of this cryptocurrency. (The original author inserted a section of Youtube video here, interested readers can click to view https://youtu.be/OQzBLQsPvvQ)

The demand for bitcoin depends on: the practical application of bitcoin; the popularity of other cryptocurrencies; current price and profit opportunities; the availability of bitcoin blockchain; investment transactions;

Performance of other cryptocurrencies

Although Bitcoin is a pioneer in the field of cryptocurrencies, there are many more advanced cryptocurrencies that create their own blockchains and higher ROIs. Therefore, the performance of the altcoin will also affect the price of Bitcoin. Although the altcoin usually reacts to the price fluctuations of Bitcoin, the opposite is sometimes the case.

In the table below, you can see the correlation between the price of Bitcoin and other major cryptocurrencies (1 means that the asset moves in one direction and reacts to external market factors, 0 is neutral, and -1 is counter Move to).

In any case, since Bitcoin's dominant position in the market is about 60-70%, it is less susceptible to the altcoin.

Bitcoin transactions take place on hundreds of cryptocurrency exchanges around the world, so Bitcoin does not have a “unique official price” – the price of each exchange is different. But arbitrage will keep the price of each exchange at roughly the same level. This trading strategy takes advantage of the spread between trading limits. For example, if Bitcoin is cheaper on BitStamp than on Coinbase, traders can buy cryptocurrency on the first exchange and then sell it on the second exchange (arbitrage).

Finally, attention should be paid to the impact of major exchanges. These are the most traded sites and their prices are considered more "official". For example, if the price of Bitcoin changes on large exchanges such as Bitfinex, Binance, and Bitstamp (or both), then the same changes may occur on other exchanges. This phenomenon can be explained by the fact that most traders pay close attention to the price of large exchanges, and they will expect the trading price of smaller exchanges to change as a result of arbitrage and other traders' actions.

This effect is effective even in exchanges located in completely different corners of the world. For example, if Bitcoin starts to become cheaper in Japan than the yen, it is likely that European and US exchanges denominated in euros and dollars will also adjust prices closely.

Taxes and laws and regulations are another factor that affects the value of Bitcoin. As we have already discussed, each country has its own bitcoin and cryptocurrency tax policy. Therefore, if a country (large-scale encryption market participants) suddenly bans bitcoin or receives a higher tax on its investment income, its price may fall sharply.

China’s influence on Bitcoin cannot be underestimated. In 2017, the government's ban on ICO and the reduction in bitcoin trading activity in mainland China led to a sharp drop in bitcoin prices – the price of each bitcoin shrank by nearly $2,000 in two weeks.

When mining equipment just appeared on the market, they were mostly made in China. For example, according to statistics, in 2017, 70% of ASIC mining machines used for BTC mining were provided by Chinese manufacturer Bitmain. In 2015, half of the network's mining capacity was concentrated in China. At present, BTC's top 10 global mining pools include 7 Chinese mining pools (BTC.com, Antpool, ViaBTC, F2Pool, BTC.top, Poolin, DPOOL). China's electricity costs are very low, which is the main reason for its large concentration of mining equipment.

However, China has the resources to conduct targeted attacks on Bitcoin. Encrypted currency mining is already "highly concentrated" because 80% of cryptocurrency mining capabilities are controlled by only six funding pools, five of which are Chinese. If these resources are combined, they can easily perform a "51% attack." After gaining control of the local hash value, the government will be able to add "custom blocks".

This is closely related to the above issues. Today, Bitcoin is still decentralized and is not controlled by any organization or individual. But in theory, the future of Bitcoin is in the hands of those who own it.

Another way of saying this is that Nakamoto has given control of Bitcoin to Gavin Andersen, who later shared this control with others. There are many rumors and arguments about whether certain bitcoin developers can control the system.

(First class note: The chart records the phased changes in bitcoin prices from 2012 to 2018. The original author said that in most cases, bitcoin prices fell due to technical failures/hacking attacks and government regulations)

Bitcoin's early price drop occurred on March 12, 2013, when the Bitcoin protocol was detected as an error. That is, the agreement does not store data on capital expenditures, resulting in the same funds being reusable. Traders panicked and began to race to sell bitcoin, causing bitcoin prices to fall by 23% (from a maximum of $48 to $37).

Until 2013, Bitcoin’s exchange rate did not exceed $15, but subsequent media reports prompted its price to skyrocket by more than $200.

After the April event, the price of Bitcoin has been fluctuating around $120 until the end of November, when bitcoin prices suddenly jumped to $1,150. But by mid-December, bitcoin prices had fallen another way and had failed to break the $1,000 mark in four years.

In January and February 2014, bitcoin prices grew steadily, and then suddenly fell from $867 to $439, a drop of nearly 50%. The plunge was due to a hacker attack on the Mentougou server, which lost more than 700,000 bitcoins (including client funds and the exchange's own funds).

From September to October 2017, bitcoin prices fell by 35% after the Chinese government announced that the Bitcoin China Exchange will stop trading on September 30. Of course, we can't forget that Bitcoin's crazy price has soared, when it reached a record high of nearly $20,000 and fell sharply due to the subsequent massive sell-off.

What is the current price of Bitcoin?

Bitcoin prices are now $9296.91. By the end of October, it had risen to $10,500, or 40%. Why is bitcoin price going up in recent weeks? Perhaps this should be thanks to China for bringing such positive changes to Bitcoin. As we said earlier, China prohibits cryptocurrency transactions, but it seems to be reconsidering the decision. Chinese President Xi Jinping said that China should "capture the opportunities brought about by Bitcoin blockchain technology."

In addition, we should not rule out the possibility of new participants entering the market, which may be another factor driving up the price of Bitcoin. Many institutional investors have repeatedly announced plans to invest heavily in cryptocurrencies, especially bitcoin.

It is worth noting that the delay in the release of TON by Telegram and the pessimistic expectations of the public on Facebook's Libra currency all indicate that Bitcoin will remain dominant in the encryption market in the near future.

The use and implementation rate of Bitcoin in our lives is steadily rising. This is another factor in the rise in bitcoin prices. Today, in addition to trading and mining, Bitcoin is also used to:

Thousands of Bitcoin ATMs have been installed worldwide. The number of companies receiving BTC payments is increasing. Therefore, the use rate of BTC is gradually increasing.

Many websites offer information about Bitcoin prices, including: CoinMarketCap, which displays BTC price charts, market capitalization, and various statistics; Blockchain.info, which is suitable for viewing transactions and details. There are also other websites that provide Bitcoin network statistics in graphical form. (First class note: This is the original author's personal recommendation, for reference only)

Please reprint the information at the end of the article, thank you for reading.

Mayor of Chongqing: Chongqing will build an enabling platform supported by blockchain and other technologies in 2020

IOSCO calls on regulators to strengthen supervision of cryptocurrency exchanges