As the largest economy in Latin America, Brazil is also one of the main participating regions of the cryptocurrency market. According to a report by the country's analysis platform "Cointrader Monitor", Brazilian bitcoin transactions reached a new record of close to 100,000 BTC.
The increase in bitcoin trading volume on April 10 is directly related to the soaring price. At present, the transaction price of Bitcoin easily breaks through the 20,000 BRL mark (Note: BRL is the legal currency of Brazil). This price increase has greatly stimulated the optimism of cryptocurrency traders, making Bitcoin a bullish trend in the Brazilian local market.

Although traditional banks in Brazil have repeatedly pressured local cryptocurrency exchanges, the volume of transactions in Brazil is still growing. In February last year, Bradesco, one of Brazil's largest banks, closed the crypto exchange Bitblue and its owner's bank account in the bank.

The Local Cryptographic and Blockchain Association (ABCB) filed a complaint with the Brazilian Economic Defense Administration (CADE, the antitrust regulator under the supervision of the Ministry of Justice). According to ABCB, Bradesco has no legal basis to support its closure of these accounts and points out that this may violate free competition regulations.

Coincidentally, the MercadoBitcoin exchange is also facing pressure from local banks. As early as 2018, Itaú Unibanco closed the Mercado Bitcoin account at the bank without any justification, and this was supported by the Second High Court of Brazil.

The MercadoBitcoin exchange is also a target of pressure from Banco Sicoob, which tried to close its account without justifiable reasons, albeit unsuccessfully. In this incident, the 21st Chamber of the Civil Chamber of the High Court of Rio de Janeiro made a decision in favour of the exchange and explained that “should provide a reasonable reason to close the account and the bank did not provide it,” and added Dao, although in the bulletin 31.379 / 17, the warning about the risks of the so-called virtual currency custody and trading, the Brazilian central bank has not banned the cryptocurrency trading business.

Brazil is not the only country

In addition to Brazil, countries such as Argentina and Venezuela have made significant progress in the field of cryptocurrency. The untrustworthy banking system and high inflation rates appear to be the two main reasons for raising interest in cryptocurrencies in these three countries.

Last month, the Argentine President Mauricio Macri announced a partnership with one of the world's largest cryptocurrency exchanges, Binance, to jointly invest in 40 blockchain-related projects. The Argentine government has agreed to invest $50,000 in each of the money lab projects over the next four years.

Some officials in Argentina also expressed interest in the prospects of tokenization. When the Vice Minister of Finance of the country, Felix Martin Soto, met with Huobi in Beijing, he said:

“We want to learn from Firecoin how to participate in the cryptocurrency and blockchain industries. For example, through the fiduciaryization of the Filipino platform, Argentina’s rich agricultural, mineral and energy resources are likely to be well financed by global investors.”

In short, the Argentine government is trying to counter the hyperinflation of the country by using bitcoin and other cryptocurrencies as viability options for citizens.

According to the latest data from the National Bureau of Statistics of Argentina (INDEC), Argentina’s inflation rate rose for the third consecutive month in March. The Consumer Price Index (CPI) rose 4.7% last month, a year-on-year increase of 54.7%.

Since then, the Venezuela’s public administration has been promoting the use of cryptocurrencies and has taken some controversial measures, such as converting retirement pensions to petroleum (Petro) or forcing citizens to pay for passports.

Although the oil currency may not be the best cryptocurrency on the market, it has played a crucial role in the large-scale adoption of encryption technology in Latin America. 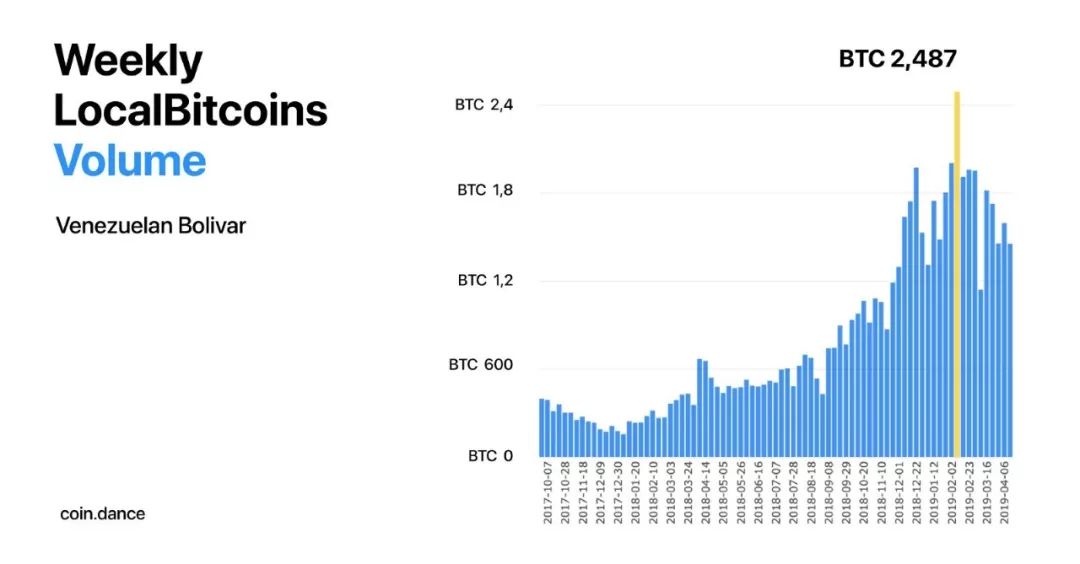 Venezuela's trading volume trend chart on the LocalBitcoins exchange
The data shows everything! On February 14 (the yellow line above), the bitcoin trading volume of Venezuela, which has abundant oil reserves and lack of cash, soared from 1,530 BTC (December 2018) to an all-time high of 2,454 BTC.

In the past five years, millions of Venezuelans fled to other countries to seek better living conditions. Argentina and Brazil are the most popular destinations.

According to official data provided by the Immigration Directory in Argentina, Venezuelans entering the country in 2018 have doubled compared to 2017.

“There are still many people without documents, so they are waiting for an appointment at the immigration office,” said Elisa Trotta Gamus, a non-profit organization leader who assisted Venezuela’s immigrants, in an interview with Bloomberg. See below: Ecoanalitica, a consulting firm based in Caracas (the capital of Venezuela), estimates that Venezuelans living abroad will inject nearly $4 billion a year into Venezuela, and Bitcoin remittances have become one of the fastest and cheapest options for Venezuelans.

Traditional remittance (top) and cryptocurrency remittance (below) Comparison of handling fee & time required
The cryptocurrency remittance was so popular that Venezuelan President Maduro imposed a tax earlier this year to charge for bitcoin payments, adding a new source of income to the Venezuelan government, which is short of funds. However, bitcoin remittances are still the best way to send money domestically compared to traditional services such as Western Union or Moneygram:

With the increase in the number of remittances and the government's failure to stabilize the economy, more and more people are beginning to understand the benefits of using cryptocurrencies to protect themselves from inflation and remit funds abroad. Cryptium and other cryptocurrency platforms allow people to store, send, receive, and transfer digital assets as easily as local currency without paying high fees or waiting for long periods of time.

With all of these factors in mind, the growth in cryptocurrency trading volume is likely to continue to grow in the coming years.