Kong Jian, the chairman of Jia Nan’s joint chairman, made a keynote speech, “The Blockchain: Opening a Trusted Silicon-Based Civilization,” he said:

1. The only obstacle for Bitcoin to break through $100,000 is time. Quantum computing currently has no impact on blockchain.

2. Halving is the fuse of bitcoin's rise, and the digital economy will become the main driving force for future economic growth.

3. China does not have a policy of “bitcoin illegal”. There are only two words in all speeches after July 2019. "Research" is not called "regulation."

4. The development trend of global blockchain, I think: compliance, innovation, and landing. Most countries in the world support digital currency, and the blockchain is not to be said.

5. There will be two wars + one application in the blockchain field, currency wars, power wars and trusted applications.

6. It should be based on blockchain-based hybrid computing that will surpass current real estate and digital real estate, becoming an important asset class in human history, and it is important to participate in the underlying computing. The following is a live speech by Kong Jianping, organized by Babbitt.

The only obstacle for Bitcoin to break through $100,000 is time. Quantum computing has no impact at present.

We have experienced several extraordinary eras in the past. The industrial era, the steam era, the electric power era, and the information age have now entered a new era, which can be regarded as the "blockchain era" or the "digital age." In the next 10 years, 20 years, or a few years later, someone will truly define this era.

What are the common characteristics of these times? The rapid growth of the economy. Only the technological revolution can bring us changes in wealth and quality of life, so now is the same, the future is more based on the digital world at the bottom of the blockchain.

The first important partner in this digital world is Bitcoin. In Bitcoin, many people make money on their luck with their own losses. To put it bluntly, it is not enough for Bitcoin, for the digital world, and for what it can do in the future, for the entire digital world, not enough to have its own judgment and cognition. Everyone buys when they buy it, and when they sell it, it is a feature of many people. I personally think that the only obstacle to breaking Bitcoin's $100,000 is time, but the process is tortuous. Recently, Bitcoin fell a lot on the day when Google Quantum Computing News came out. Ren Zhengfei also said that the blockchain is worthless in the face of quantum computing. I think he is very right, because he made a perfect comparison between quantum computing in 10 years and 20 years and today's blockchain.

However, the current quantum computing does not affect the bitcoin and blockchain. There will certainly be more anti-quantum encryption technologies in the future.

Halving is the fuse of bitcoin's rise, and the digital economy will become the main driver of future economic growth.

Why Bitcoin can reach 100,000 US dollars, many people think that it is halved. In the past, every time the bitcoin was reduced by 10 times, I personally don’t think so. Halving is only the fuse. It will bring about changes in supply and demand, but not necessarily Bringing bitcoin prices up, or this surge does not have enough support.

The following are the main reasons for its rise.

For example, in 1920, the German legal currency was quite unreliable and could be used to order a stove. Recently, the depreciation of the Argentine currency has been very large. In addition to the superpowers such as China and the United States, few countries in the world have real ability to issue legal currency.

For example, the world of digital assets will grow larger, with the exception of digital currencies and data assets. Who is our data asset now, Tencent, Alibaba, today's headlines, and the US group. In the future, I believe that more data assets will be their own. The use and interaction of data assets requires the relationship between blockchains.

For example, there is also the digitization of physical assets. Now I have to go overseas to buy a suite, or someone else has to buy a suite in China. What to do with the warrants is very troublesome. I believe that this thing will become very convenient in the future. Your property and car are just a Token in the blockchain. But it is still very early.

I believe that the digital economy will become the main driving force for future economic growth. You don't have to worry about the economic downturn. At this time, the traditional industry only needs to put some leverage and allocate more digital currency such as bitcoin, which can resist the economic downturn. Look at the blockchain, and the projects in the new field may become the next Sun Zhengyi and Shen Nanpeng.

To sum up, I personally think that the digital economy is a real economy. Digital currency is also a real physical asset. There are two laws in the Internet that are well established: one is Metcalfe's Law, and more links will generate more data value, and Internet companies are like this. The other is Gilder's law, and the faster rate will speed up the flow of various elements.

These laws are still in force in the digital world, and our digital world will be larger than the Internet era and the mobile Internet era. The value to be anchored in it will be greater than the value of the Golden Age and the US Dollar era. I believe that the future of Bitcoin is still very promising.

In 2013, the five ministries and commissions said that bitcoin is a virtual commodity, and ordinary people can participate in trading freely, but financial institutions cannot participate. China does not have a policy of “bitcoin illegal”.

The seven ministries and commissions in 2017 have nothing to do with bitcoin.

We found that in 2017, everyone saw that many of the central bank’s leadership speeches were about digital currency regulation. After July 18, 2019, there were only two words in all speeches. "Research" is not called "regulation", and the change is very large.

Of course, the general secretary said that the core three points: the most advanced theory, the commanding heights of innovation, the new advantages of industry.

At the same time, the National Development and Reform Commission also deleted the digital currency mining that was originally included in the “elimination category”.

The development trend of global blockchain, I think: compliance, innovation, and landing. Most countries in the world support digital currency, and the blockchain is not to be said.

Libra and DCEP hit the old world, and Bitcoin is the anchor of the digital world

Libar brings a currency war, which can bash the sovereign currency of any country with unstable currency. At the same time, people who do not have a bank account system can use digital currency with a smart phone. It is indeed very important that our country attaches great importance to it.

DCEP, China's central bank's digital currency will lead the global central bank digital currency, which is no doubt, certainly the first global launch. And Libra is starting a currency war, and we have actually seen the crisis it brings. At the same time, what is bitcoin? I think it has the best chance to become the anchor of the digital world, because it is different from the other two forms, at least I personally are very optimistic about its future.

What will happen in the future, in the field of blockchain is two wars + one application, today the theme of the conference is also the application of unbounded, trusted applications. What I just talked about is the currency war. The national currency with weak sovereignty will be baptized.

Blockchain can also bring power to war, and computing becomes more and more important, and in a short period of time, it is more important than calculations in some areas of artificial intelligence. Currency wars, power wars, and trusted applications are the three latest forms brought by blockchain.

The power war is called POW in the blockchain. There is a Moore's Law: every 18-24 months, its performance will increase and power consumption will decrease. An Avalon A11 mine is equal to the computing power of more than 40,000 Apple computers.

This is an era of computing power. I believe that the lowest blockchain in the future will inevitably have a deeper relationship with POW.

We also launched an artificial intelligence chip, and our chip in the field of bitcoin is also the world's first. Blockchain ASIC chips, China has already led in stages, and companies that make chips abroad have been killed by Chinese companies!

The Internet Congress says the community of human destiny, the blockchain is built on the human digital civilization community, because everyone's value exchange will become more and more convenient. The era of silicon-based civilization will be the era of power and power. Whether it is blockchain or artificial intelligence, it is necessary to calculate power to enhance its computing power and obtain better results.

Silicon-based civilization, the entire era will be born value intellectual network, now everyone is mentioning artificial intelligence Internet of Things, AIOT, the future is called value intelligence networking, ABIoT. Many trusted applications require the smart side to enter some data, which is more real than the human data.

There are also 5G developments that will bring more promotion. Now everyone is pushing cloud computing because they want your data. Therefore, the future must be cloud computing + super node + edge computing, mixed forms of several forms of coexistence, everyone can also participate.

In the long run, it should be based on blockchain-based hybrid computing that will surpass current real estate and digital real estate, becoming an important asset class in human history, and it is important to participate in the underlying computing.

We believe that in a new era, in the era of blockchain and artificial intelligence, there should be a blockchain company with a market capitalization of 10 trillion US dollars. We also hope that computing power, chip-related operators will be one of them! 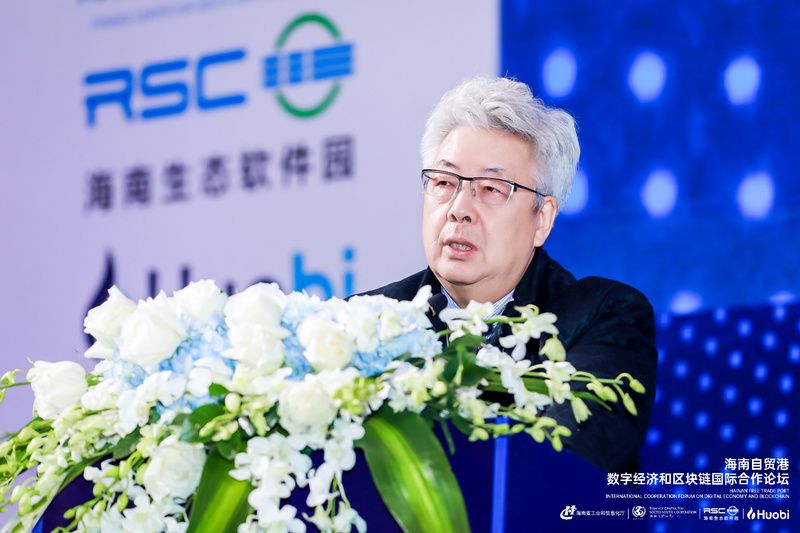 Founder of Crypto Oracle: During the new crown epidemic, DeFi may play an important role